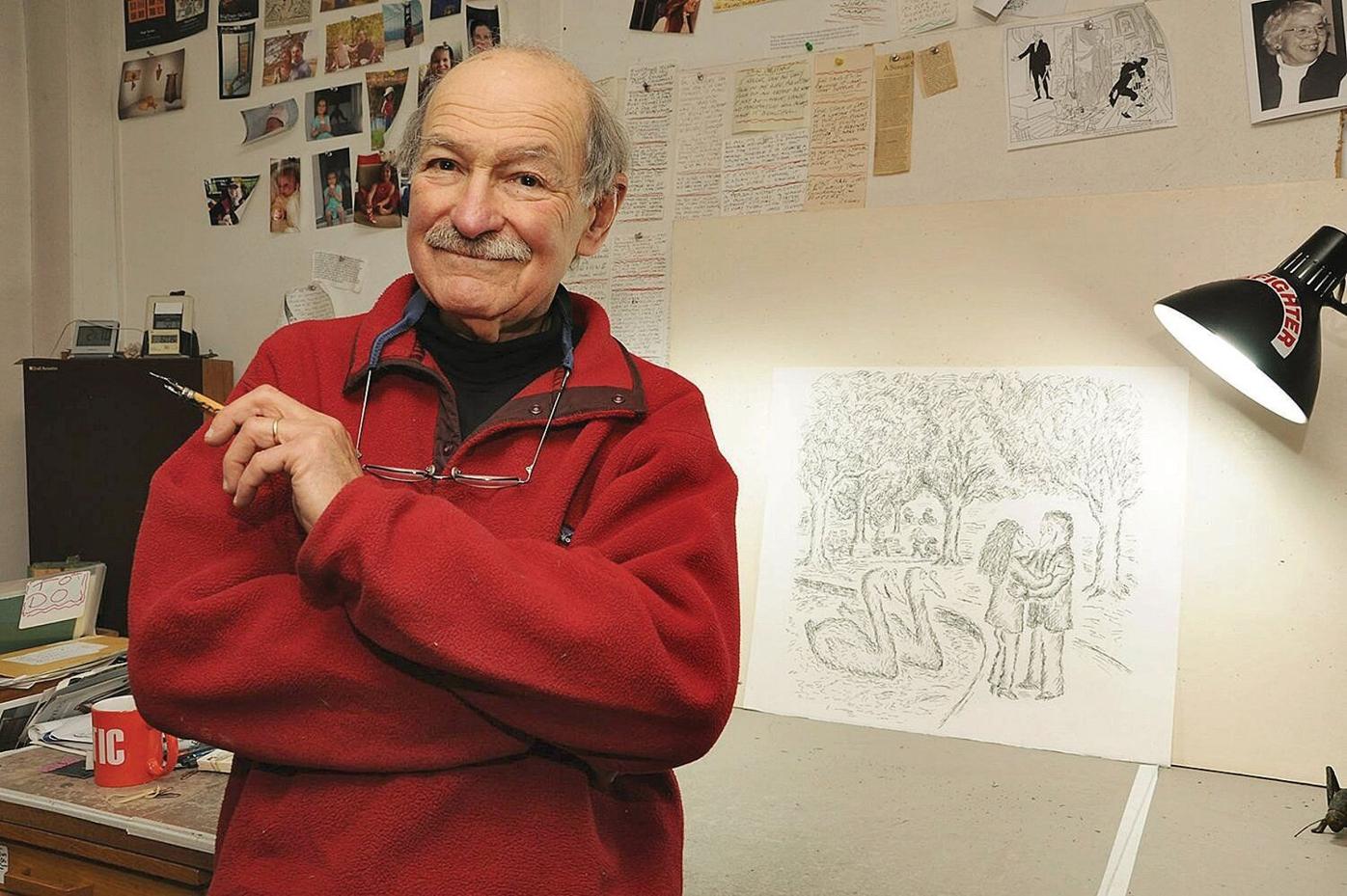 Ed Koren of Brookfield, whose collection "Into The Wild" was published by Newfane-based Button Street Press this year, has been drawing cartoons for The New Yorker since 1962. 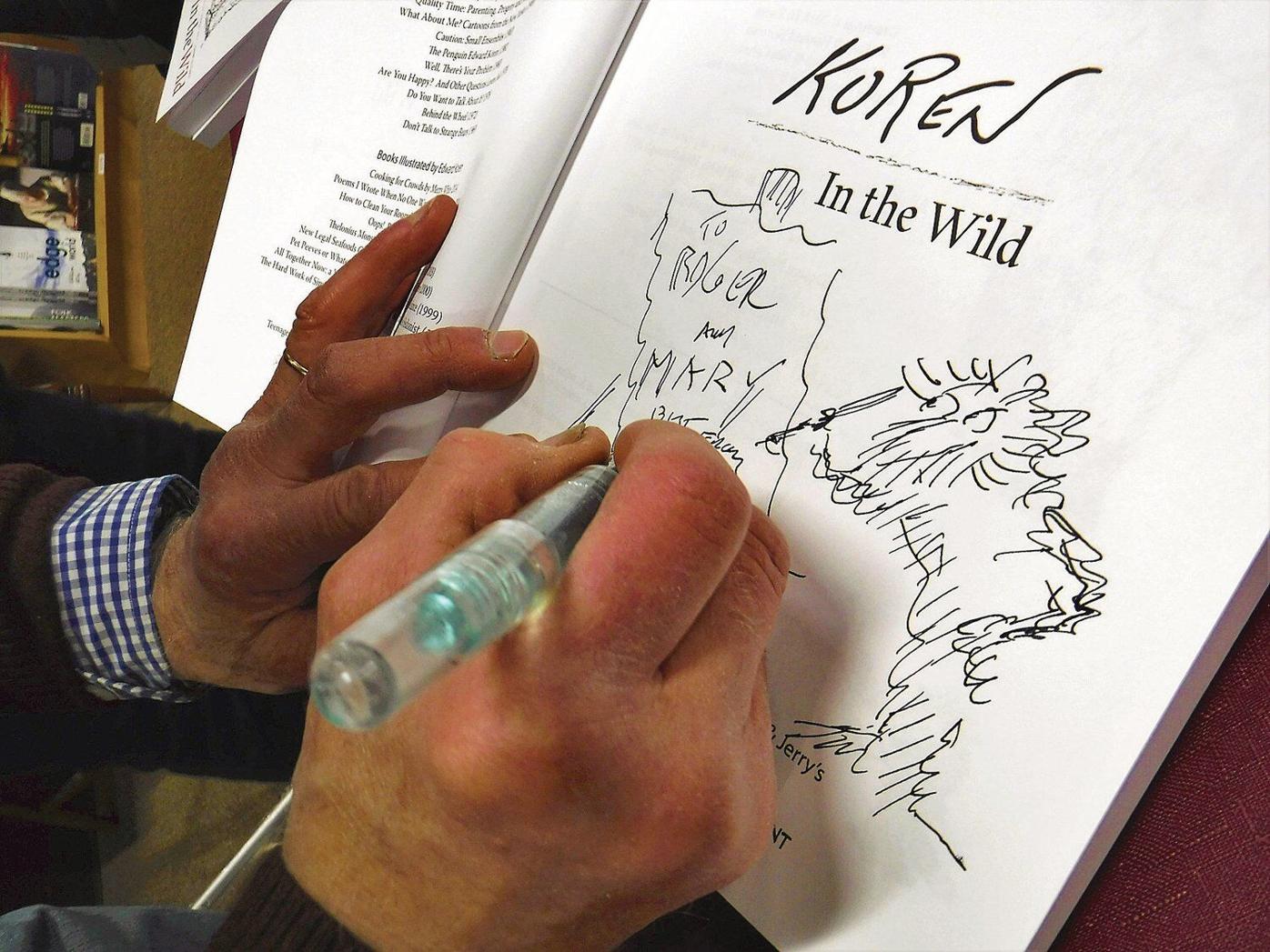 Ed Koren's collection "Into The Wild" was published by Newfane-based Button Street Press this year. 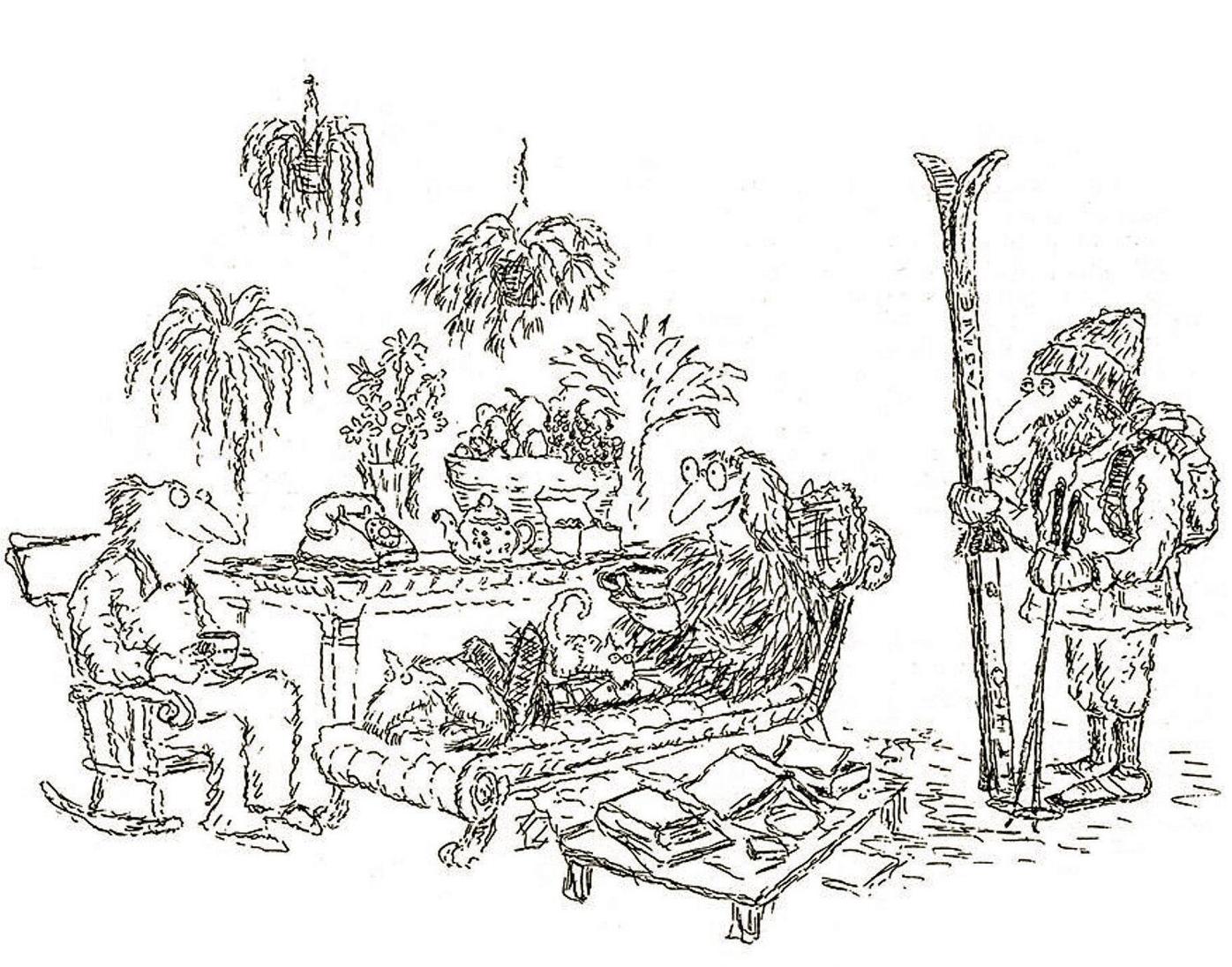 "Into The Wild" focuses on the rural vs. urban theme in many of Ed Koren's cartoons.

Ed Koren of Brookfield, whose collection "Into The Wild" was published by Newfane-based Button Street Press this year, has been drawing cartoons for The New Yorker since 1962.

Ed Koren's collection "Into The Wild" was published by Newfane-based Button Street Press this year.

"Into The Wild" focuses on the rural vs. urban theme in many of Ed Koren's cartoons.

"I think of him," Norman says of Koren, "as a contrapuntalist."

People more familiar with the cartoonist's work than with game-winning Scrabble words might wonder if contrapuntalist is the name of one of his fuzzy-beaked creatures rather than, as the dictionary reveals, someone who composes counterpoint.

Counterpoint as in Koren is a New Yorker magazine contributor who lives and works in Vermont; a master of fine arts graduate of Brooklyn's Pratt Institute and member of the Brookfield Volunteer Fire Department; and the creator of a collection of cartoons first published by global media powerhouse Conde Nast, yet back in circulation — as the 196-page Button Street Press title "In the Wild" — thanks to a publisher located in Newfane, population 1,621.

The 83-year-old artist, born in the Big Apple in 1935, wasn't pining for small-town life as a high schooler in the early 1950s. Then his English teacher invited him to apprentice at a summer theater in Waitsfield. Going on to New York's Columbia University and graduate work in Paris and at Pratt, he was teaching at Rhode Island's Brown University when the New Yorker accepted his first cartoon — a sloppy, cigarette-smoking typist wearing a sweatshirt with the word "Shakespeare" — in the spring of 1962.

"I thought at one point I'd be a sociologist — I was always interested in issues and questions," he says. "Somehow that morphed into drawing."

Vermont beckoned again when he visited friends in Braintree.

He purchased what he thought would be a second home in nearby Brookfield in 1978.

"I just kind of stayed."

Cohen met the cartoonist in 1982 after Curtis Ingham Koren, Cohen's Skidmore College classmate and Koren's soon-to-be wife, saw his picture on an ice cream carton. Cohen went on to attend the couple's wedding, which featured children walking with drawings of flowers and other fancies.

"One kid carried a huge ice cream cone with humanoid eyes and a goofy smile," Cohen recalls in the book. "I was moved by that, and Ed gave it to me. It's been framed and on my wall at home ever since."

Koren's characters, summed up by The Washington Post as "human-like monsters and fuzzy, beaked humans," are recognizable enough that when the newspaper reviewed the original "Star Wars" in 1977, it referenced the artist to explain the film's vision.

"There's a rapturous moment of whimsy during the Cantina sequence in which we briefly glimpse one monster beginning to laugh heartily at another monster's unheard joke," the review noted. "It's as if an Edward Koren cartoon has suddenly sprung to life."

That said, the motivation for most of the artist's drawings is more down to earth. Norman, who wrote the book's preface, recalls sitting with Koren at Montpelier's Three Penny Taproom when the illustrator ordered the night's special, an oversized Reuben-esque sandwich.

"Next to us sat a late middle age couple, who felt the need to inform us that they lived on the Upper West Side of New York," Norman recounts. "When the waitress set Ed's meal on the table, the man of the New York couple leaned close, and promoting the obvious as a revelation, exclaimed, 'I see you ordered the special.'"

Koren pulled out his pad and pen.

"On the notebook page appeared two shaggy Korenesque men sitting at dinner," Norman continues. "Well over the confines of a plate, sprawled one of Koren's decidedly Mesozoic creatures (with expressive hands) who, though clearly dead, still maintained a bemused expression. The aforementioned male New York interloper spoke the caption: 'I see you've ordered the special.'"

Koren has been similarly spurred throughout the state.

"His cartoons beautifully capture the duality of rural and urban life," Cohen says. "He's got Vermonters looking at city folk, and city folk looking at Vermonters."

Enter Margot Zalkind Mayor. As a founder of Button Street Press and the Vermont Authors Project, she works to promote locals like Koren, who she discovered hadn't released an anthology for two decades. Experienced in publishing her husband Archer Mayor's early regionally based mysteries, she decided to tackle a cartoon book.

"Ed's just kind and good and phenomenally generous with his talent, donating posters and T-shirts for local fundraisers and causes," she says. "It's like he doesn't have the city-slicker aspect."

That insight, in turn, inspired the book's theme.

"There are compilations of cartoons, but for the most part they're very general," she says. "I wanted to make this unusual. The idea of country versus urban just struck me as his own."

Or the cartoon of a skier telling a cellphone user "Hey — this is the quiet trail!" because the artist found himself wanting to say that on local slopes.

Or the cartoon of a teller asking a cash-nabbing robber "paper or plastic?" born in the lobby of Koren's bank.

"They were suspicious," he recalls of sketching a draft there. "I had to say I was a depositor."

Ask Koren a question and he tends to smile or deflect more than answer.

How long does it take to complete a cartoon?

"Would you ask a surgeon how long it takes to do thoracic surgery?"

What's his favorite one?

"That's like asking if you have a favorite kid."

In the book, Koren is happy to let Norman do the talking.

"I often get the sense that for days on end, Ed's humans and creatures are his preferred social life," the novelist writes. "On occasion in a Koren cartoon, when one person offers a snippet of dubious wisdom, a capricious witticism, or a comment replete with curmudgeonly certitude, another person smiles (perhaps with hapless optimism) and yet another frowns (perhaps with abject glumness). Contrapuntal responses!"

Then again, Koren is just as content to let his work speak for itself. Take his response to a 2010 New York Times review.

"Mr. Koren can be funny, psychologically acute and philosophically provocative," the newspaper opined. "He has a pitch-perfect feel for gag lines, and with his scribbly draftsmanship has forged one of the most distinctive styles in cartooning."

Then came the counterpoint.

"Mr. Koren," it continued, "is a nonconfrontationalist who has avoided many contentious issues of the last half century. Vietnam, Iraq, racial strife, the AIDS pandemic: these are not the sorts of concerns that worry his characters. Not explicitly, anyway. Considering the kinds of controversial subjects that comic artists like R. Crumb, Art Spiegelman, Daniel Clowes and others have addressed, Mr. Koren seems awfully timid. Woody Allen's world is Tolstoyan by comparison."

By the time the review took him to task on the subject of sex ("Mr. Koren's work is strictly PG, which is too bad — it would be interesting to see what his offbeat sensibility would make of the eternally troublesome sphere of intercourse") the artist was ready to turn the page. His work tackles the world — "just not from a hard-nosed political take," says the man who prefers fuzzy beaks.

Koren may not wield a pen like a sword, but he's happy to fan the flames — of his wood stove. The onetime Vermont cartoonist laureate talks less about his native New York ("whenever I go there, I just want to get out") and more about memories of delivering his drawings to the Montpelier Amtrak station before technology changed everything.

"Waiting for the train with its horn and watching the man put them on the baggage car — there's no press of the button that can reward one in the same way," the self-described Luddite says. "I fear for some of the influences on Vermont, but know Vermont is benefiting as well. It's not clear-cut."

As for his own future?

"My hope is to never retire," says the artist. "I'm much more interested in pushing on than looking back."

Kevin O'Connor is a freelance writer and contributor to Southern Vermont Landscapes.