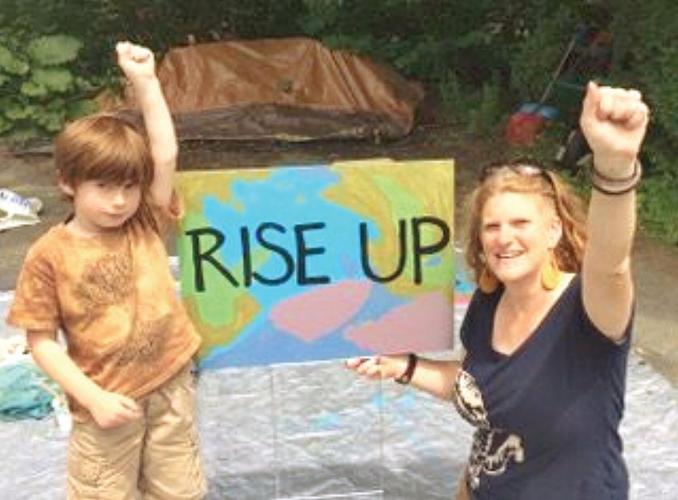 Abby Mnookin, right, seen here with xxxx, is a constant presence at 350VT and Mother Up! events throughout Brattleboro. 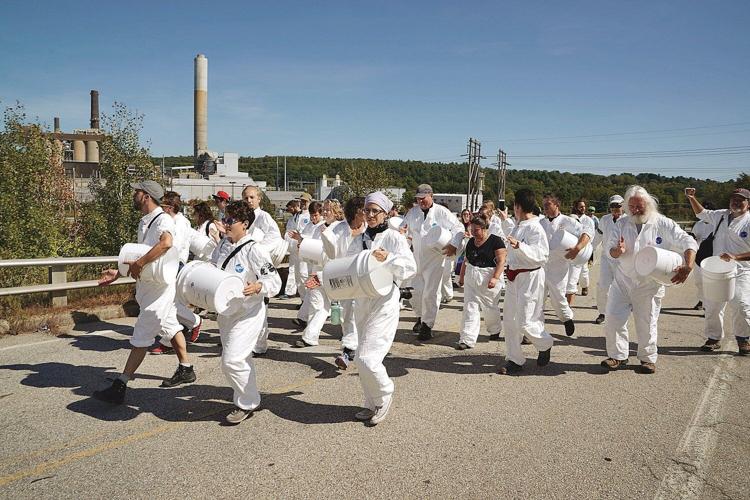 Climate activist Abby Mnookin of Brattleboro was among protesters who gathered at the Merrimack Station coal-fired power plant in Bow, N.H. on Sept. 28. 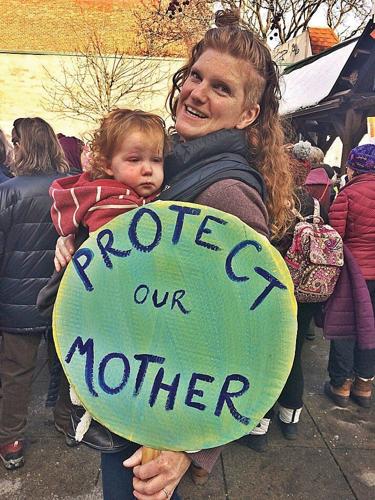 Abby Mnookin, seen with her daughter April, is a climate activist and organizer for Mother Up! Brattleboro.

Abby Mnookin, right, seen here with xxxx, is a constant presence at 350VT and Mother Up! events throughout Brattleboro.

Climate activist Abby Mnookin of Brattleboro was among protesters who gathered at the Merrimack Station coal-fired power plant in Bow, N.H. on Sept. 28.

Abby Mnookin, seen with her daughter April, is a climate activist and organizer for Mother Up! Brattleboro.

Readers: This story was updated on Oct. 23 to correct that Mnookin's degree is in environmental science, and to correct the name of the Dakota Access Pipeline.

BRATTLEBORO — Abby Mnookin arrives breathless for her interview. She's a climate activist and organizer for Mother Up! Brattleboro, which is an offshoot of 350VT, the climate justice advocacy group. According to her, she is fighting the three-headed monster of the Western Hemisphere: patriarchy, capitalism and colonialism.

When asked if she ever feels overwhelmed, she tells a story she heard from Wangari Maathai, the late founder of the Green Belt Movement and winner of the 2004 Nobel Peace Prize. In the story, there's a huge forest fire in Africa and all the large animals in the forest are terrified and fall into despair and paralysis. It's so big, so hot, and they can't run or figure out a way to put out the blaze. All the elephants and antelopes, owls and jackrabbits, even the lions and baboons, are frozen in terror.

All except for the hummingbird, who flies as fast as she can from the forest to the river, and returns with her small beak full of water to douse the fire.

The animals say, "You? You're tiny. You're just a hummingbird. You can't make a difference."

The hummingbird replies, "Drop by drop, at least I can do my part. I'm not going to just sit and watch my home burn. I'm doing the best I can."

You may have seen Mnookin — pronounced "mah-New-kin" — zipping around Brattleboro at the helm of her electric cargo bike as she drops her children April, 3, and Lucy, 7, off at school. In a little over two years, she has put 3,500 miles on that vehicle.

"Abby Mnookin is a powerhouse, she's a great organizer," said Dave Cohen, director of V-Bike in Brattleboro. "Between Mother Up!, 350 Brattleboro, and 350VT she has galvanized our community and uplifted us with actions and increased awareness. She is the ultimate cargo-bike Mom — riding the talk."

Mnookin arrived for her interview fashionably dressed, accessorized with oval wooden earrings, sunglasses reminiscent of Audrey Hepburn and a thin gold nose ring. She looked hip and younger than her 43 years. Must be all that bike riding.

"Climate change is here. It's real. It's happening now. But the difference between 1.5 degrees Celsius and 2 or 3 is very high,' she says. "People say, `What does it matter what Brattleboro does in the scheme of climate change?' But there are very real impacts that we can have.

"During Hurricane Irene, we saw how the poorest were unjustly affected more deeply. People still haven't recovered. No one can avoid or pay their way out of climate crisis, but the impacts are disproportionate to the marginalized communities — island nations, the poor, young people, women and people of color."

It's obvious that the cause of justice is central to her work in Mother Up!

Mother Up! got it's name from Sun Dance Chief Rueben George, who was told to "Warrior Up" by his mother just before his work opposing Kinder Morgan's Keystone XL pipeline. Mnookin expands on this principle and mentions all of the contexts of the word "mother," as a verb. It's a belief that all people and all parents need to mother the earth, to protect what they love. "We're not exclusive to those identifying as mothers; fathers, non-binary, families and single people, we all have to do our part," she says.

Mnookin's thoughts are quick-fired. She offers this perspective: "All these issues — #MeToo, Black Lives Matter, climate justice, immigrants rights, the atrocities at the border, Standing Rock, all these crises — have their roots in the same soil of capitalism, colonialism and the patriarchy. Each time there is something to rally around, those intersections feel even more pronounced. It's all the same. We can't strive for liberation or justice in one without striving for them all together."

Mnookin's job at Mother Up! may be part-time, but her passion and commitment is full-time.

Mnookin came to Brattleboro in 2002 to teach high school biology at The Putney School. She and her partner Laura met at Antioch Graduate School, where they both got master's degrees in environmental science.

Growing up in suburban Boston, Mnookin's first exposure to transformative nature was on summer camping trips in Acadia National Park. "Those trips highlighted the disconnect between my suburban life and nature," she says.

Her first protest was for women's reproductive rights in Washington, D.C., in 1993. Her mom joined her and some high school friends as a chaperone and they met up with her grandmother in the city. Even though that day saw three generations voicing their demands, Mnookin wouldn't say activism runs in the family.

Recently, 350VT, 350NH and the Climate Disobedience Center came together outside the coal-fired Merrimack Station power plant in Bow, N.H.. Their plan was to trespass on company land and symbolically attempt to empty a warehouse-sized pile of coal.

Five different local, state and federal authorities met the protesters by foot, in marked and unmarked cars, by boat and in a helicopter. Sixty-nine people were arrested, Mnookin one of them.

"Our intention was to build unity and power, shift our relationship to risk, and to make a symbolic statement that we can't be burning coal from Pennsylvania, West Virginia and Korea," she said.

It was her first act of civil disobedience and her first arrest. "It was time to put my body on the line, " she says.

She calls her experience at Standing Rock Indian Reservation in November 2016 a "pivotal moment" that brought a lot of issues to light and pulled them together.

"For the indigenous leaders and their communities, the proposed construction of the Dakota Access pipeline was not a new issue. It was a continuation of a 500-year history of broken treaties and stolen land as a way to wipe out the indigenous way of life.

"While there, I saw the contrast so clearly between this peaceful resistance camp and the militarized police presence literally surrounding us. The contrast was so stark and so clear. That made a big impact on me about how I wanted to organize and who I wanted to align myself with."

The Mother Up! website reads: "For many parents, our days are filled with putting food on the table, wrestling limbs into snow gear and checking in on school work. Often our busy lives prevent us from taking a leading role on the larger issues at play in the world in which we are raising our children. Many parents share a profound sense of despair in the face of climate change, yet feel powerless to act. By building `Mother Up!: Families Rise Up for Climate Action,' we at 350VT are engaging parents to take action in both their own communities and those most affected by the fossil fuel industry."

The organization meets on the fourth Monday of every month and provides child care and a meal for anyone wanting to connect to climate activism.

As she speaks, Mnookin looks straight ahead, as if seeing her thoughts appear on the horizon.

On the topic of role models, she singles out environmental activist Joanna Macy, who has said, "Taking action is a way of being hopeful."

When looking at the state of the world today and the myriad of issues that confront us, it is natural to feel despair and overwhelm.

Mnookin says, "I want to figure out how to bring more joy into the movements. And I still want to be a hummingbird."

Kevin O'Keefe is a freelance writer based in Brattleboro.