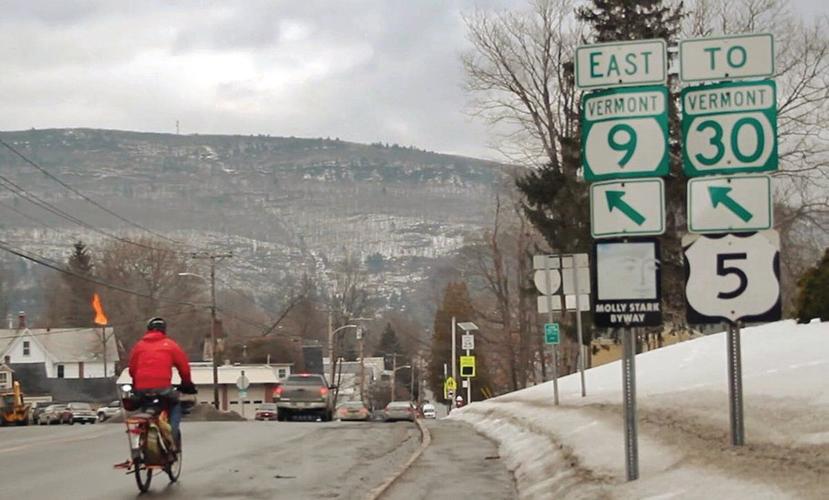 In a scene from "Motherload," Dave Cohen rides his cargo bike along Western Avenue. 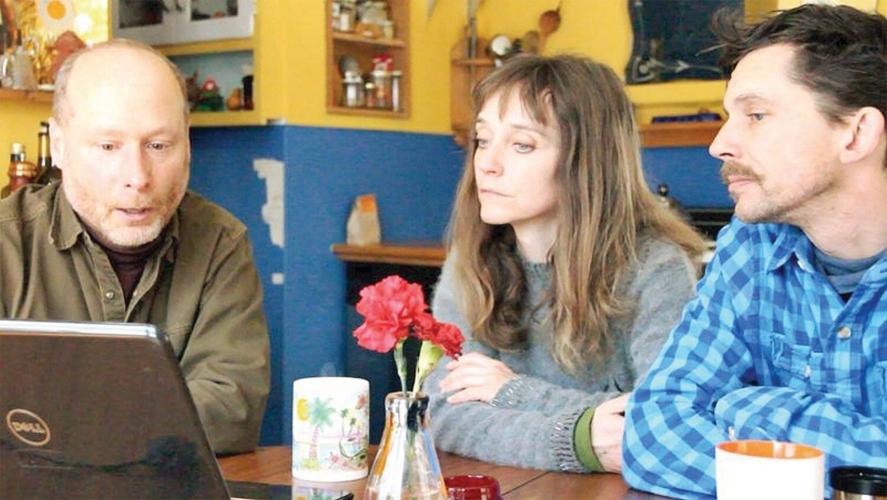 In a scene from "Motherload," Dave Cohen provides a free bike consultation for Zac Grace and Jana Zeller of Brattleboro. 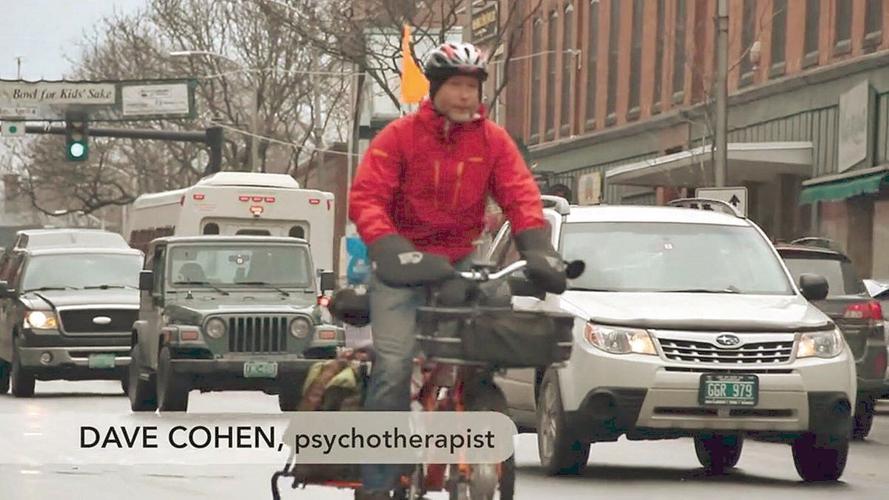 In a scene from "Motherload," Dave Cohen rides his cargo bike in downtown Brattleboro.

In a scene from "Motherload," Dave Cohen rides his cargo bike along Western Avenue.

In a scene from "Motherload," Dave Cohen provides a free bike consultation for Zac Grace and Jana Zeller of Brattleboro.

In a scene from "Motherload," Dave Cohen rides his cargo bike in downtown Brattleboro.

BRATTLEBORO — An increasing number of electric-assisted bikes and e-cargo bikes sporting high-flying colored flags are spotted about town these days, many equipped with large buckets for carrying groceries - or even children. It is part of a shift toward a growing bike culture.

The founder of Brattleboro-based non-profit advocacy organization VBike, Dave Cohen, said the freedom of biking allows for a more intimate connection with neighbors and friends and a way to engage in social interaction versus the social isolation and lack of sensory perception within the confines of an automobile. It also moves humans away from the sedentary lifestyle of the automobile culture that Cohen said "is killing us. ... 'Automobility' implies that we disengage our bodies and our senses of the world."

Cohen's work as founder of Pedal Express, a bicycle delivery service in San Francisco, and Vermont's VBike, as well as his work with Go!Vermont, a wing of the Vermont Agency of Transportation that promotes alternative means of transportation, caught the attention of filmmaker Liz Canning. Her nationally-released cargo bike documentary, "Motherload" debuts in Vermont on Friday at 6:30 p.m., at the Brattleboro Retreat Farm on Route 30. The screening follows a Critical Mass bike ride that starts at the Brattleboro Common at 5:30 p.m., looping around Elliot and Flat streets, down Linden Street, reclaiming the roads, ending at the farm.

Presented by VBike, this award-winning, crowd-sourced documentary explores a mother's search to reconnect with the world around her.

A press release for the film notes that for most of her life, Canning almost exclusively used a bike for transportation — that is, until she had twins in 2008. Hauling babies by car was not only unsustainable, but took the freedom and adventure out of life, and Canning felt trapped.

Frustrated, she went on the internet to search for "family bike" and uncovered a global movement of people replacing cars with cargo bikes designed for carrying children, groceries and virtually anything a household needs to move around. She also found out that electric-assist bike technology, coupled with the new, innovative cargo bike designs, is a game-changer in hilly places such as Vermont. Canning then set out to learn more, and "Motherload" was born.

Early on in the project, Canning ran into people such Emily Finch, a mother of six who transports all her children on a cargo bike and became a sort of celebrity featured on syndicated talk shows and news media. Finch's moment in the media spotlight helped to spread awareness about the utility of these bicycles. Canning had found an emerging and growing community across the country of inspired families and households. But she also found that they were making sustainability look really fun and joyous with their cargo bikes. "Motherload" asks why this is so, and asks what it can teach us about mainstream culture.

Particularly exciting for Brattleboro is that the documentary highlights the work of VBike, and includes footage of downtown Brattleboro, and Cohen providing a free bicycle consultation with a local family, filmed by Ted White, a filmmaker and professor at Keene State College and the University of Massachusetts. Cohen, who is also a psychotherapist, explores evolution psychology, and how technology has outpaced our DNA, and the detrimental effects of the automobile culture that disassociates us with our surroundings. This social isolation causes depression, anxiety, and a disengagement from our community, he explained.

"Finding your neighbors and connections are important. Loneliness is a killer," Cohen said.

E-bikes, or electrically-assisted bikes, are the quintessential alternate and hybrid power, a combination of electric and human energy. When biking through Vermont's hills and vales, as pedaling becomes difficult uphill, a choice of different levels of assist can carry bikes with the help of a motor placed in the hub of either wheel, providing speeds up to 20 miles per hour. It's powered by a 45-cell battery that may be charged at any typical 120-volt wall outlet.

When Cohen moved to Vermont 12 years ago he was surprised at how few bicycles he saw in use. Four years ago he started VBike as a way to reboot biking, concentrating mostly in this area, then was asked by Vtrans to expand his VBike work to encompass all of Vermont. He said VBike focuses on being a green mobility center to help people move toward the age of bike shops.

But it is hard to change the automobile attitude, he said.

"Cars have diminished our concept of what we can do." While the issue of "what about the hills?'" is addressed with the e-assist, other concerns include winter biking and personal safety. But there are studded tires for the bikes, and if they can do it in Oulu, Finland, where biking year-round is a fact of life, so can Vermont, he said. And there's new innovation in the pipeline, such as a zero emissions vehicle by PEBL that combines the comfort of a small three-wheeled, fully enclosed e-bike with a body made from plants.

As climate change becomes more evident, more people will gravitate to the bike culture as we learn how to live in the coming years, advocates say. Stephanie Bonin, executive director of Brattleboro Downtown Alliance, Brattleboro Town Manager Peter Elwell, and state Rep. Molly Burke, P-Windham 2-2, are just a few of the local people who own cargo bikes.

For Cohen, it is all about hope. Namely, hope that more families embrace e-bikes and become more engaged in the community; that as the bike culture takes hold, the infrastructure will follow, as it did in Burlington and other cities where there is a robust biking community.

The average price of an e-bike is anywhere from $1,800 to $6,000, but with rebates offered by Green Mountain Power and low-interest loans, they are within a reasonable reach. For information on the loans and rebates, visit vbikesolutions.org.

The growth of the automobile culture influenced today's sprawl, building homes far away from places of business making automobiles a necessity. A merge toward a bike culture will result in more careful, controlled urban planning. While the "bike is a vehicle for a small planet," according to Cohen, it will take diversity in transportation to navigate a world of climate change.

The film debut will also feature a photography exhibit by Marco Yunga Tacuri, who has been chronicling the growing climate and bike activist movement in Brattleboro. For more information, email info@vbikesolutions.org or call 802-258-7013

Cicely M. Eastman is a freelance writer and the former arts editor of the Brattleboro Reformer.