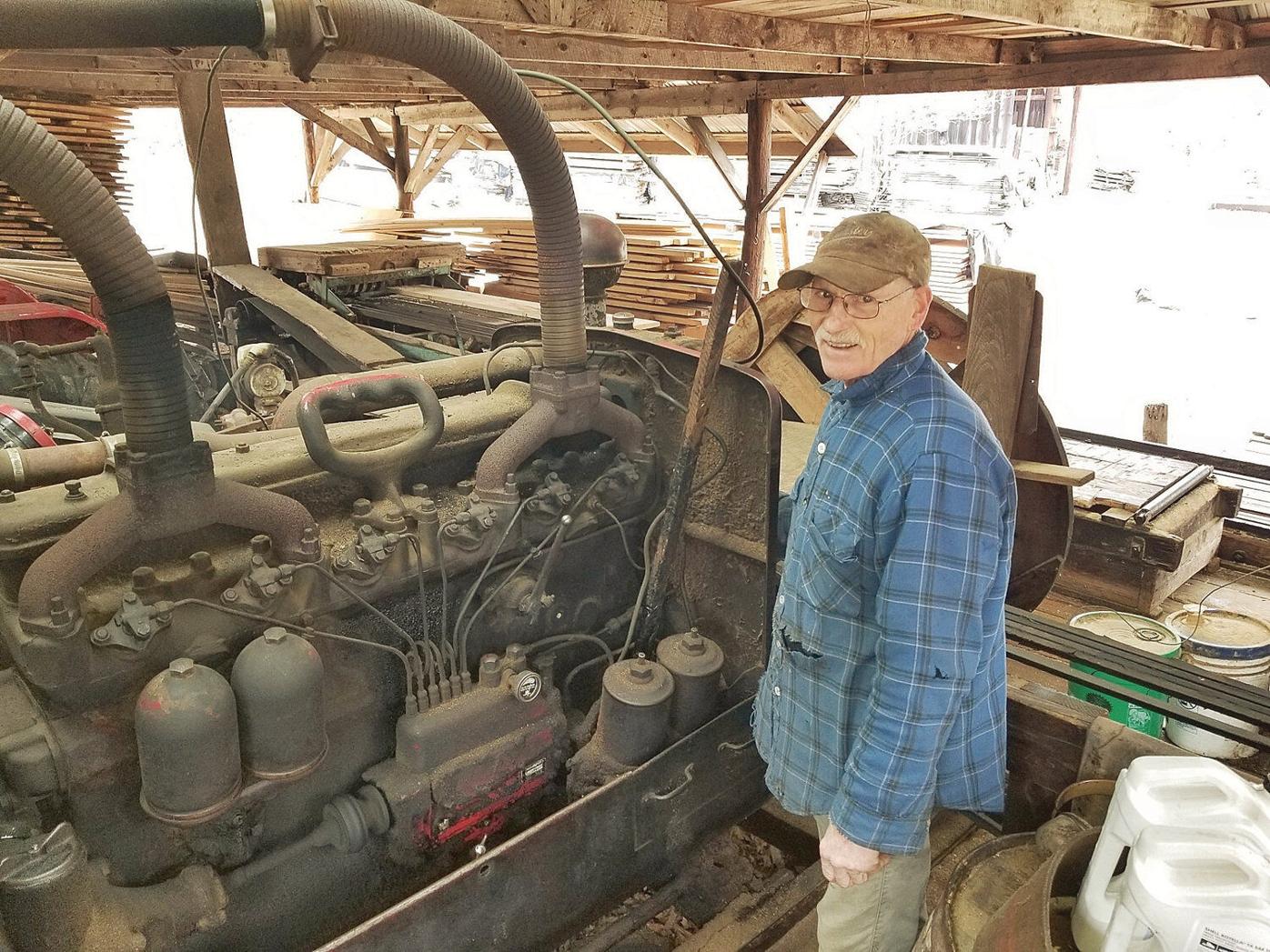 Dennis Hamilton's sawmill, seen here with a 52-inch blade, has been in steady operation on the family property since 1977. 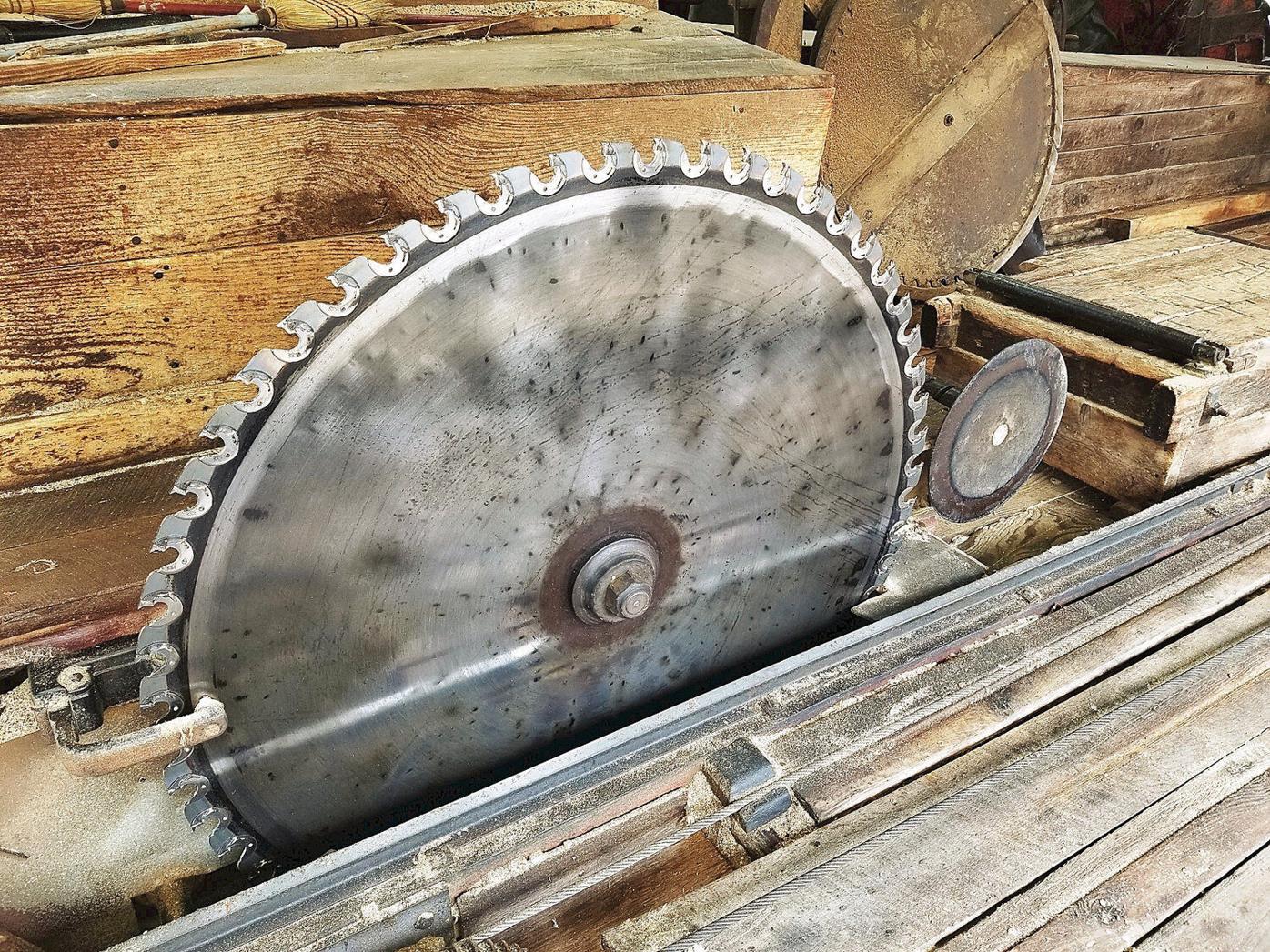 With the saw blade stopped, Dennis Hamilton poses with some freshly milled pieces of hemlock at his lumber company in Brattleboro. Hamilton Lumber has been a sideline for him since 1977. Below: Hamilton uses two saw blades on his mill at Hamilton Lumber: a 52-inch version, shown here, and a backup blade, which is 48 inches in diameter. PHOTOS BY CHAD ERICKSON 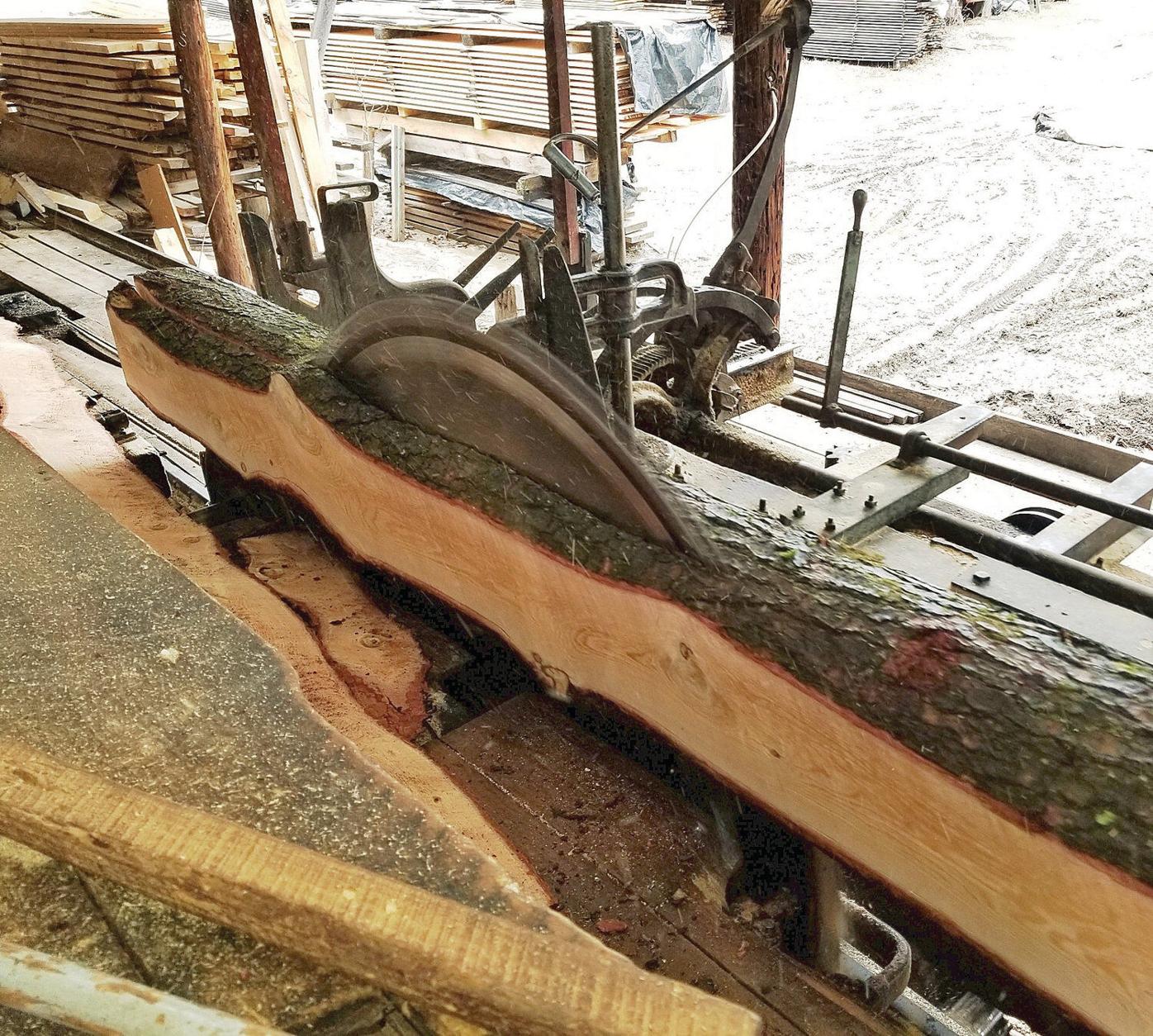 A hemlock log is put through the 52-inch main saw at Hamilton Lumber in Brattleboro. The side pieces with bark are removed when the board is put through an edger, which has two side-by-side saws. 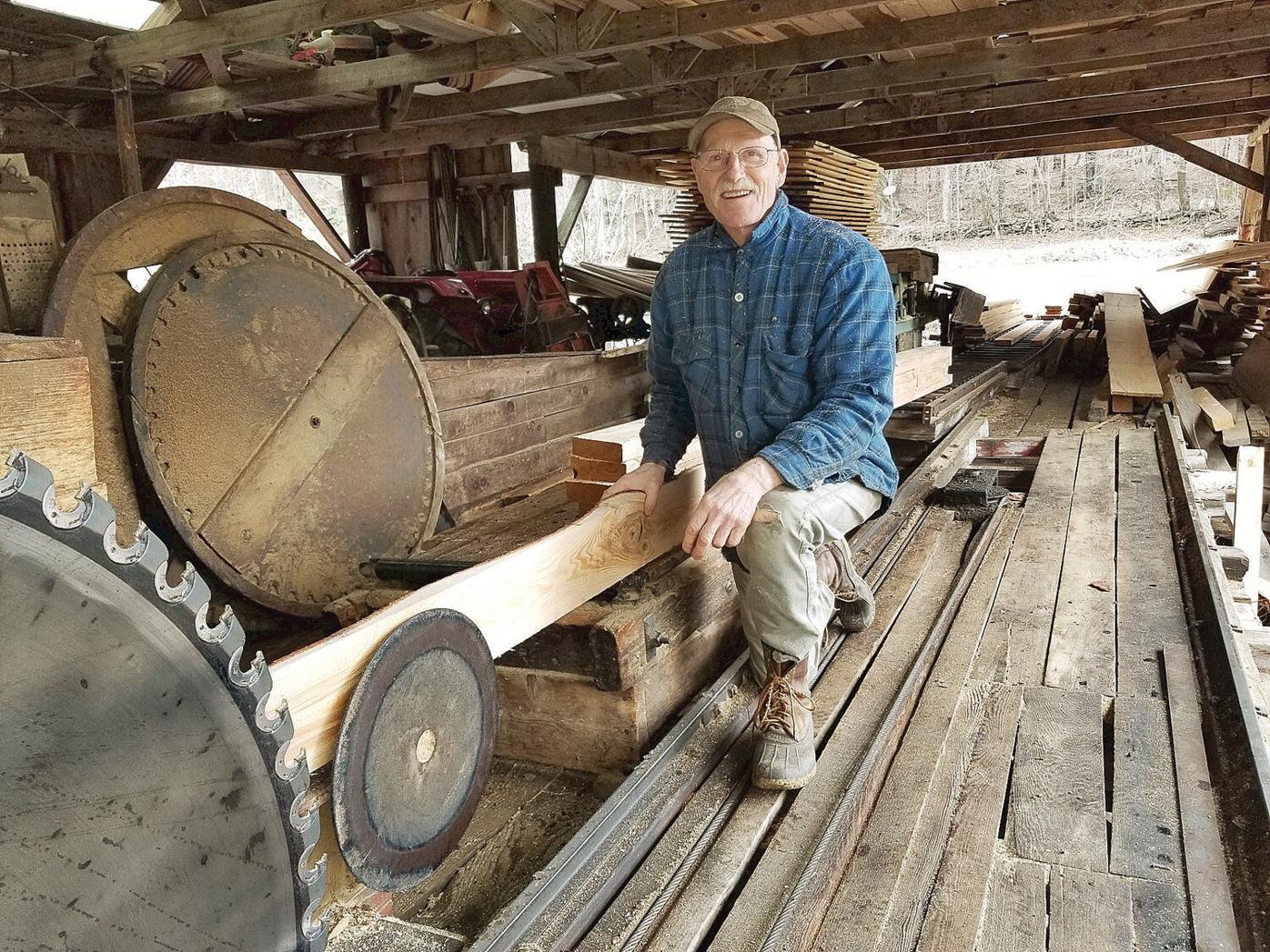 Dennis Hamilton has been sawing lumber since 1977 near his Brattleboro home.

Dennis Hamilton's sawmill, seen here with a 52-inch blade, has been in steady operation on the family property since 1977.

With the saw blade stopped, Dennis Hamilton poses with some freshly milled pieces of hemlock at his lumber company in Brattleboro. Hamilton Lumber has been a sideline for him since 1977. Below: Hamilton uses two saw blades on his mill at Hamilton Lumber: a 52-inch version, shown here, and a backup blade, which is 48 inches in diameter. PHOTOS BY CHAD ERICKSON

A hemlock log is put through the 52-inch main saw at Hamilton Lumber in Brattleboro. The side pieces with bark are removed when the board is put through an edger, which has two side-by-side saws.

Dennis Hamilton has been sawing lumber since 1977 near his Brattleboro home.

Editor's Note: This is the first story in an occasional series about Southern Vermont artisans, crafters and laborers who create with their hands.

BRATTLEBORO — The International Harvester engine that powers the 52-inch circular saw blade at Hamilton Lumber starts with gasoline and spark plugs, but performs its work with diesel fuel ignited by compression.

The engine is old — it was built around World War II — and loud. So loud that Daniel Hamilton, the owner and chief sawyer for the past four decades, had to shout over the rumble to be heard.

"It's just such a cool thing," Hamilton said. "I've always loved that machine. It's the only power unit I've ever had here."

Hamilton Lumber is a small sawmill located on Hamilton Road, an unpaved lane that runs up at a sharp grade from the north side of Route 9 in Brattleboro. The mill is down the road from the Joseph Hamilton Farm, the family dairy operation on which Dennis Hamilton was raised.

Here, he turns trees into lumber — one tree at a time, one board at a time.

"It's safer if you stand there," said Hamilton, pointing to planking alongside the platform where the saw blade, spinning, was about to accept another hemlock log. The wood was clamped to the saw atop a carriage, and it moved back and forth at the command of a lever Hamilton operated. After each cut, Hamilton brought the carriage back and used a ratchet system to move the log over 2 inches before it was passed through the saw again.

The outside, roundish, barky sections of logs are called slab wood, and these are removed during the early and late passes through the big saw. Another machine, called an edger, has two parallel saws that trim more bark and cut the lumber into rectangular shapes.

"I've always just made the rough lumber," Hamilton said, directing another log through the saw.

The sawmill was produced in Orange, Mass., by the long-defunct Chase Turbine Manufacturing Co. The hardware is even older than the engine that moves it. Hamilton said the mill was made in the 1920s or the 1930s, at the latest.

Hamilton Lumber, which is next to Dennis Hamilton's house and is visible from his kitchen window, has been a constant in his life for the last four decades. He made a living in very different ways during that time, but always with a sideline in lumber.

"I like cutting wood," he said in his house, in a quieter voice. "I think it's important to keep doing this, because I like making things."

When Hamilton bought the sawmill, in the fall of 1977, he already was familiar with its operation and outputs. Five years before that, Hamilton had cut logs from trees on the family farm and had Francis Clarke, whose mill was over on Ames Hill, saw them into boards. That lumber built a house to share with his wife, Jolene, and their four children.

"What I really wanted to do was raise a family around farm life," he said.

Hamilton graduated in 1968 from the agricultural vocational program at Brattleboro Union High School, in 1972 from the University of Vermont, and returned to Brattleboro to work on his father's dairy farm and finish building his house.

Hamilton's younger brother, Kevin, also returned from school and began working on the farm. Dennis Hamilton said he and his sibling and his father all had different ideas about agriculture, so it was decided that Dennis would work elsewhere.

In the fall of 1976, Dennis Hamilton began teaching agriculture at the Windham Regional Career Center — the renamed agricultural and vocational studies department of Brattleboro Union High School. He did not enjoy the experience.

"I was just so overcome by the way things were, away from the farm, the way kids behaved," Hamilton recalled of his reasons for resigning after one school year. "I made up my mind that this was not for me."

He tried a variety of jobs over the next four years. He worked on the farm. He went logging with his brother-in-law. He did carpentry work for the nearby Vermont Maple Museum. And he milled lumber.

Hamilton purchased Francis Clarke's sawmill in the fall of 1977. The seller taught the buyer how to operate the dangerous equipment at the mill, which remained on Ames Hill for two years before Hamilton relocated it to a parcel of land next to his house.

"I borrowed money to buy it, but the money that paid for the mill was the lumber that we sold," Hamilton said. "I did an awful lot of custom sawing on weekends. A lot of it."

After Kevin Hamilton took over the farm, his parents, Joseph and Ellen, wanted him to live in the farm house. In 1980, Dennis Hamilton cut logs into lumber at his sawmill and built his parents a new place to live on Hamilton Road. It provided him with many hours to think about his professional life.

"I worked a whole year on that house," Dennis Hamilton said. "And, socially, I was just lonely."

In the fall of 1981, Hamilton returned to teaching agriculture at the Windham Regional Career Center. This time he stayed until June of 2016, when he retired.

For 38 years, Hamilton operated the sawmill on most Saturdays. He would sometimes saw in the evenings, but preferred Saturdays because that was when his two hired hands would join him. While Hamilton operated the saw, an experienced man worked next to the blade, separating the slag from the boards and feeding the boards through the edger. The third man stacked the lumber after it was edged.

"A lot of the custom sawing jobs that came in here were pine," Hamilton said. "We'd make them into one-inch boards and people would use them for siding on their houses or their barns or their sheds or whatever."

"I don't like the dimensions of the lumber that comes out of those big box, home improvement places," Hamilton said. "When you come here for a 2-by-4, it's two inches thick by four inches wide, not 1 by 3 ."

Hamilton said he never paid more than $1,200 a year for labor, but the rising cost of workers' compensation insurance made it more difficult to operate the mill at a small profit. He also tired of finding dependable employees who were satisfied with working one day a week.

Four years ago, Hamilton began operating the mill by himself. Since he retired from teaching, he works on weekdays. But gone are the days when three men could saw a truck-load of pine — about 1,200 feet — in an hour.