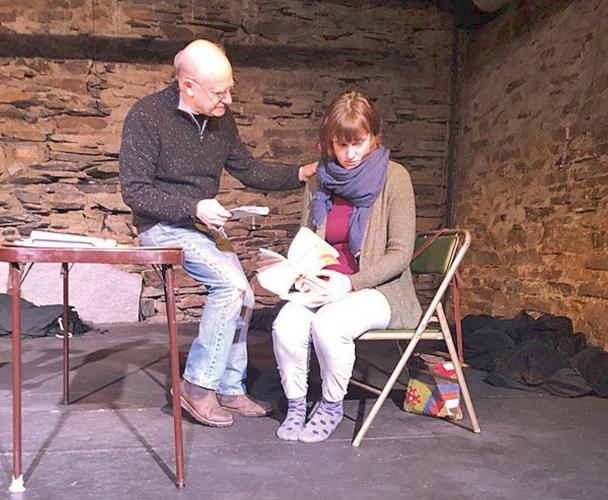 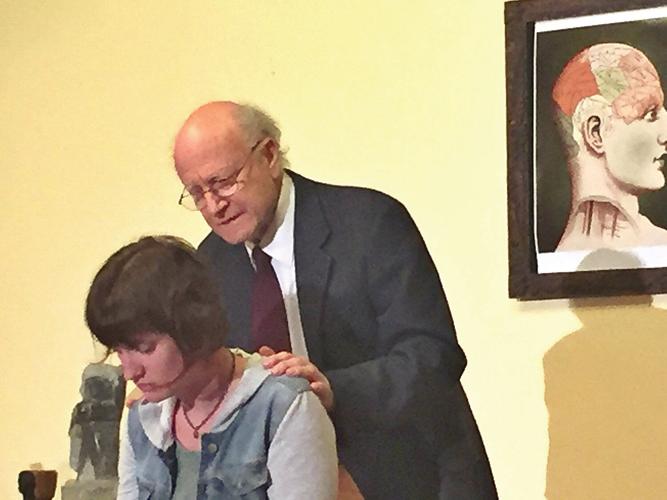 BRATTLEBORO — When "Oleanna" opened in 1992, New York Times critic Frank Rich wrote, " a year later, a mere newspaper photograph of Anita F. Hill can revive those feelings of rage, confusion, shame and revulsion that were the country's daily diet during the Senate hearings on Clarence Thomas. Sexual harassment remains such a hot button... What are the piddling disputes of Democrats and Republicans, after all, next to the blood feuds between men who supposedly 'don't get it' and women who doubt they ever will?"

When Newfane's Bahman Mahdavi of the Rock River Players (RRP) heard the call for new RRP directors, he jumped at the chance to deliver "Oleanna." An astute long-time theater buff, Mahdavi couldn't resist this impassioned response to the Thomas hearings - a tightly-wrapped, richly-challenging and deeply thought-provoking piece that crackles with relevance 27 years later.

"Oleanna," a two-character play by David Mamet, is about the power struggle between a university professor and one of his female students who accuses him of sexual exploitation and, by doing so, spoils his chances of being accorded tenure; i.e., security in an academic's cushy life.

We open on Carole, a struggling student who has come to see her professor, John, to discuss her grade and her failure to produce the work the professor expects. John, wrapped up in himself, smitten with his own empty oratory, responds to her anxiety with repelling condescension: Carole pleads, "Teach me I don't understand [I need] to get on in the world. How can I do that if I fail I'm stupid." John sees bait and spins on his student's self-deprecation to say he, too, " was raised to think myself stupid." Easy for him to say as he wields the upper hand. Aiming to get to her heart he seeks affinity with, "I like you," her reaction to which is poignant, uncomfortable. And he rails on with hokum, as much as she insists "I don't understand." She says many times that his words, his language, his precepts go over her head. She doesn't get it. He, in turn, slams higher education as a crock of bull anyway and to secure her confidence he says, with sugary sincerity "I understand you." Cut to the motive, "Come meet with me a few more times and your final grade's an A." I'd break the rules for you, he says.

One assumes John's a professor of education and so it's easy to bristle as he slams higher education and, in fact, questions whether education for all at the younger stages is a good thing; and he certainly doesn't see why he should be responsible for the furthering of public education. He's just fine with sending his own son to private school. (I, a retired educator, can hear the drums of our Trump-appointed U.S. education secretary.) Once Carole dials into his terrible attitude toward equity in education, she pivots and begins to take notes.

Behind closed doors, John is inappropriate with Carole: rubbing her back in Act 1 and physically attacking her in Act 2. This, with John's blatantly irresponsible professorial stance, prompts Carole to marshal her forces. The notes she takes document John's offenses and fuel a case against him that ultimately leads to loss of tenure.

Of course "Oleanna" is about sexual dynamics and gender politics, but the burning underlying issue is power and Carole slams John for his misuse of it. Carole musters the strength of her case, asserting that her concern is for " the feelings of women - and of men - of those not in superior positions It's all about privilege." John's a breaking man by now scrambling to save his status: "I'm trying to save you," he bleats. Really?! And Carole nails it: "You're not God You've worked 25 years for the right to insult me " And Carole's listened to one last conversation John's had with his wife - largely over a real estate transaction - which he ends with "I love you, baby." Carole, clearly in power now with some muscle behind her, drives it home with a last admonition to the crumbling John: "And don't call your wife `baby'!"

Reared in Chicago, Mamet, 72, is a star alum of Plainfield, Vermont's Goddard College. His acting theory, presented in his controversial 2001 "True or False: Heresy and Common Sense for the Actor" is coined "practical aesthetics"; "It's the job of the actor," Mamet instructs, "to show up, and use the lines and his or her will and common sense, to attempt to achieve a goal similar to that of [his character]. And that is the end of the actor's job."

RRP actors Jon Mack and Rebecca Musgrove do this deftly with well-articulated nuance and breath-taking comebacks. Mamet's dialogue, so distinctive it's been coined Mamet Speak, boasts a crisp cadence of stichomythic fragments and prematurely halted thoughts. It pops and percolates, builds to fever pitch and then throttles back. Lore has it that a young Mamet rode Chicago city buses scribing snippets of dialogue to learn how to make his real. He aces real. And the RRP deliver it with sizzling immediacy under Mahdavi's direction.

"Oleanna" refers to a 19th-century escapist vision of utopia. Food for thought: Why that? In contrast, Mahdavi opens his each act with the first three minutes of Beethoven's 7th. I never thought I'd be quoting Youtube comments but, relistening to the 7th as I write, I've spotted this: "Am I the only one here who pictures the downfall of civilization during the dark parts of this piece?" There are no answers in "Oleanna" but they're enough questions to fuel pithy dinner talk for weeks to come. See for yourself. "Oleanna" plays Friday and Saturday, May 24 and 25, at the Hooker-Dunham, 139 Main Street. Tickets at the door or in advance at rockriverplayers.com. "Oleanna" is not suitable for audiences under 15.