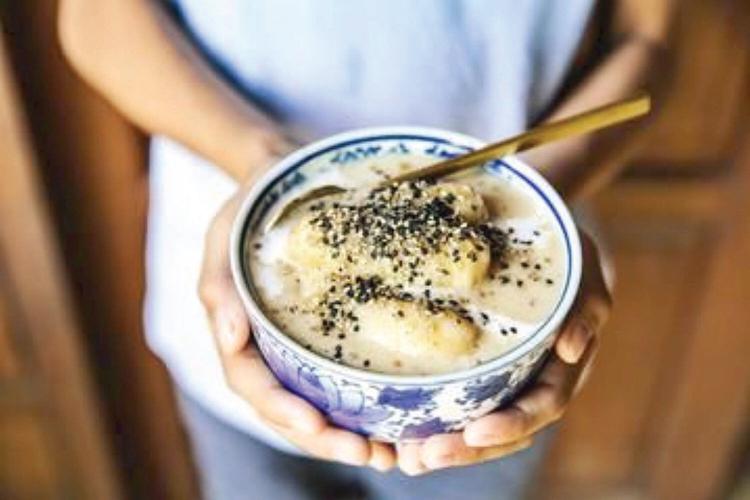 Chek Khteh is a creamy, sweet dessert made with bananas, coconut cream and tapioca. 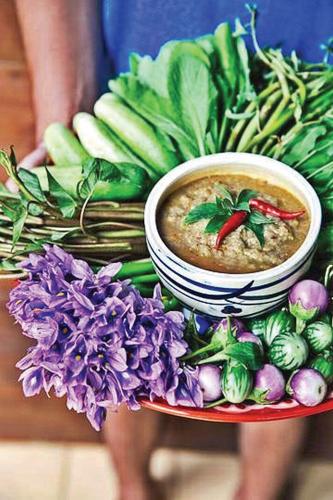 Teuk Kreung, a famous Cambodian dish, is a kind of dipping sauce with a prohok (fermented fish) base accompanied by fresh raw seasonal vegetables. 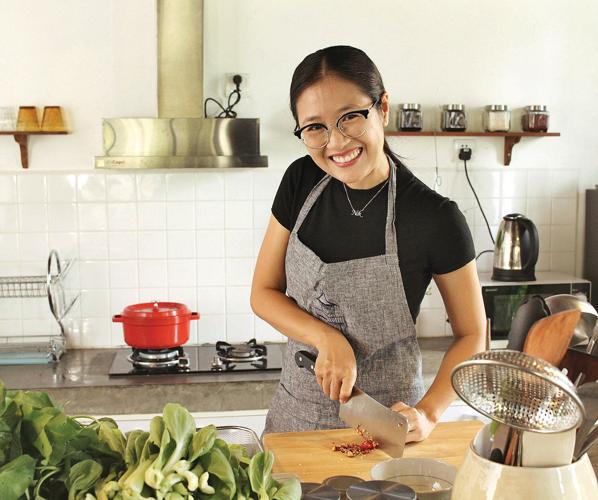 Chef Nak will visit Putney from July 15-21 to introduce Southern Vermont to Khmer cuisine and her upcoming cookbook "Nhum: Recipes from a Khmer Home Kitchen." 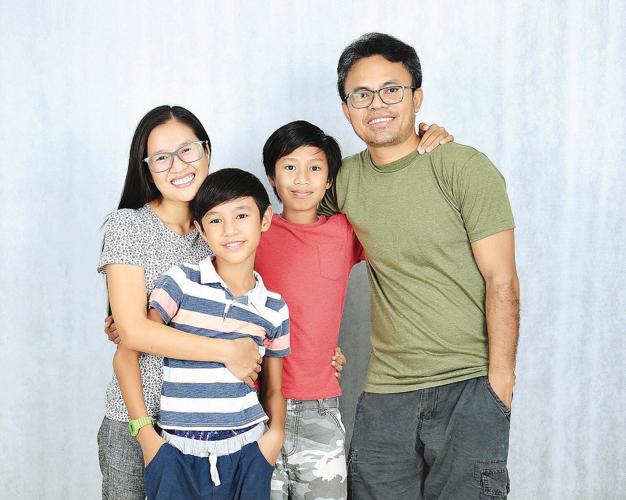 Chek Khteh is a creamy, sweet dessert made with bananas, coconut cream and tapioca.

Teuk Kreung, a famous Cambodian dish, is a kind of dipping sauce with a prohok (fermented fish) base accompanied by fresh raw seasonal vegetables.

Chef Nak will visit Putney from July 15-21 to introduce Southern Vermont to Khmer cuisine and her upcoming cookbook "Nhum: Recipes from a Khmer Home Kitchen."

PUTNEY — The Putney General Store has been in business at its current location on Kimball Hill since 1796. In that time, as far as anyone knows, it has never served Cambodian duck noodle soup to its customers, let alone for breakfast.

But patrons who stop by Monday morning will have the option of trying an authentic Khmer breakfast staple, and meeting Cambodian chef Ratanak Ros, better known as "Chef Nak."

Her efforts to revive and popularize Cambodian cuisine include a new cookbook, and week-long residency in Putney, the home town of her husband Sarub Chhuon and father in law, Charley Todd.

"I'm so excited to be bringing Cambodian Cuisine to southern Vermont, and especially Putney which our family thinks of as our second home," Chef Nak told the Reformer. "Of all the arts of Cambodia which we are working to restore after the genocide and bring to new heights, of course the culinary arts are loved by everyone, and I think Vermonters will fall in love with Cambodian Food!"

"It sounds delicious," Lyssa Papazian, who co-manages the Putney General Store with Betsy MacIsaac, said of the soup, which she will make with Chef Nak the night before. "It's really a first that we're participating in a culinary event, and we're glad we could be a small part of it."

In Putney all next week, Chef Nak will introduce Southern Vermont to Khmer cuisine. "Most of the major culinary and cultural institutions [in the area] will come together as partners for one project: to celebrate Cambodian culinary arts and culture," Todd said.

It's a stop on her five-week tour to promote her soon-to-be-released first cookbook, "Nhum: Recipes from a Khmer Home Kitchen." While in Putney, she will teach a cooking class, prepare a special lunch buffet, give a cookbook talk and a cooking demonstration, prepare a four-course special dinner, and tell stories about her culinary passion, one that links a small town in New England with a capital city of 1.5 million people on the other side of the world.

In a bid to preserve Cambodia's cooking culture, Chef Nak still visits villages across the country to collect age-old recipes from elders, she said on her blog at her business website, https://rotanak.co/. She recently told Asia Life magazine, "I need to find those who still have knowledge of what they remember eating when they were young, especially before the Khmer Rouge." It's a race against time, she told the magazine.

"Nhum" is scheduled to be published next month. Photographed by Nataly Lee, it includes 80 traditional Khmer recipes of street food classics, soups, salads and stews. "Most are rarely, if ever, served in restaurants, even in Cambodia," Todd said.

Chef Nak's passion and vision is to revive a culinary heritage nearly obliterated by the Khmer Rouge. That dark time in the nation's history is "the elephant in every family room in Cambodia," Todd said, and Chef Nak's family is no exception.

Chef Nak's ties to Putney begin with her husband Sarub Chhon and father-in-law, Charley Todd. Todd is president of the board of directors of Cambodian Living Arts, (CLA) a nonprofit dedicated to saving and restoring the nation's arts and culture.

Todd's adopted son Chhon met Chef Nak in 2004 while working for the nonprofit. CLA was founded in 1998 by Arn Chorn-Pond, a Khmer Rouge labor camp survivor and a part-time Putney resident, as a way to preserve the performing art forms and rituals the Khmer Rouge attempted to erase. An estimated 90 percent of Cambodia's artists are believed to have died before the regime could be chased from power.

CLA is now focused on helping artists build and develop careers through scholarships, fellowships, and direct support, according to Todd.

Chef Nak started working with CLA at 19, and by age 22 she was head of finance, Todd said. She learned about preservation of performing arts there, and has used that learning and inspiration to research, preserve and promote Khmer culinary arts.

Chef Nak started a food business called Rotanak, with the hope that Cambodian fare can be known worldwide, the way Thai and Vietnamese cuisines are today. "I want to share the taste of Cambodian home cooking with the world," she said in a recent blog post on her website.

What she hopes to spread is a cuisine that Todd describes as "in many ways like Thai and Vietnamese foods, but with many subtle and not-so-subtle differences. Freshness dominates, with plenty of vegetables and fish, and rice as the national staple."

One key difference between Khmer cuisine and that of its neighbors is heat, or lack thereof. While many Southeast Asian cuisines use chili peppers and spices liberally, "in Cambodia, the chili is optional," Todd explains.

The cuisine's secret sauce doesn't stay secret for long once you catch a whiff. "Prohok," a super-pungent but delicious paste made with fermented fish, is an essential element of Khmer cuisine and is used as a sauce, as well as an ingredient.

Todd said that one of Chef Nak's signature dishes is shrimp fritters made with whole, tiny fingerling shrimp, with the shells on. "She learned it from street vendors she would pass on the way to elementary school," Todd said. "She came to realize it seems like a complicated dish, but it's really easy and she can teach you in just 10 minutes."

Chef Nak's culinary education began with her grandmother and mother in Phnom Penh, her hometown. In a recent blog post on her website, she talks about how food was a necessity, not a luxury, when she was a child. She got sick of eating the same food all the time, so she made up her own recipes and started to make her own food.

While Chef Nak is spreading the flavors and aromas of Khmer cuisine, her two sons, ages 11 and 10, will be enjoying a part of the world they adore.

"My grandsons love Putney more than any place on earth and their two best friends live in Putney," Todd said. "So that's why they call it a jewel in the crown of their summer vacation and consider it `the center of the universe.'"

The family visits Putney often. Chef Nak's first Christmas here in 2017 is remembered as "an amazing and very cold, but beautiful experience," Todd said. The visits to Vermont are a chance for her sons to spend time with their grandfather, make friends, and enjoy what Vermont has to offer. "[The boys] spend a lot of time at Sun Hill Farm in Putney and love soccer, swimming, biking and playing with their Putney friends," Todd said. "And they founded the Minecraft Club at the Putney Public Library."

There will be many opportunities to meet Chef Nak in Putney this coming week. She will teach a cooking class, prepare a special lunch buffet, give a cookbook talk and a cooking demo, prepare a four course special dinner, attend a documentary film screening and tell many stories along the way about her global vision and culinary passion.

"Nhum: Recipes from a Khmer Home Kitchen" can be preordered at https://rotanak.co, For a complete schedule of events visit the website or find her Facebook page at Chef Nak.

Victoria Chertok, is a freelance writer and frequent contributor to the Brattleboro Reformer.