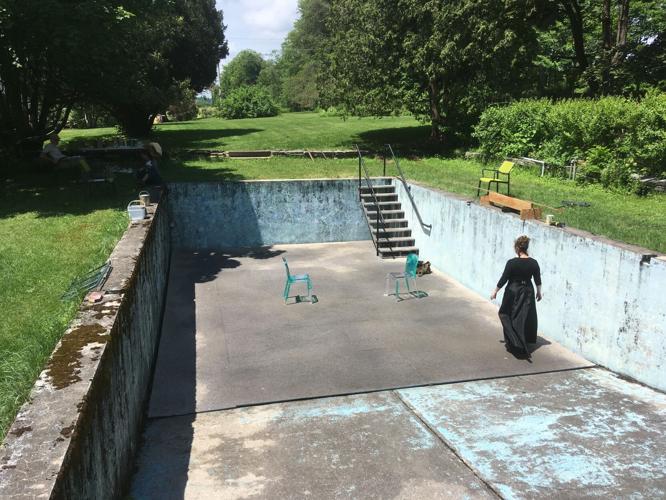 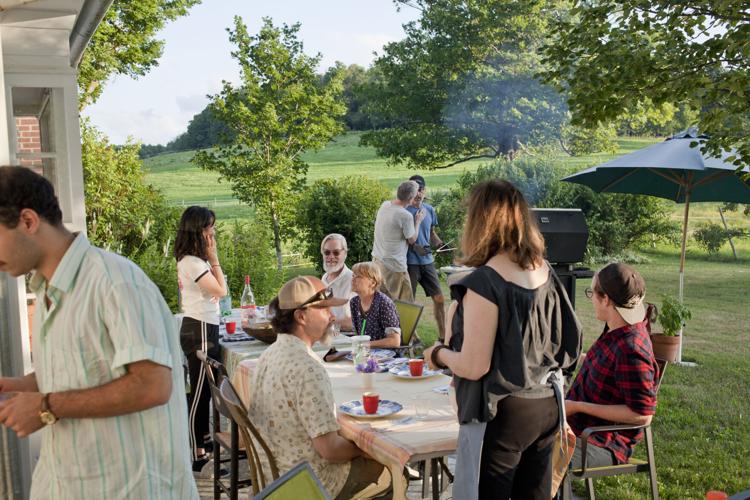 Cast and crew of a past Living Room Theatre production at one of their daily communal meals where the creative process is highly encouraged to continue off stage. 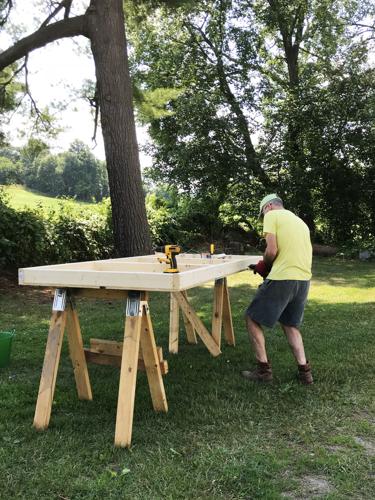 Just a stone's throw from where the Living Room Theatre cast and crew enjoy communal meals on the grounds of the Park-McCullough House in North Bennington, set backdrop construction and other technical preparation also takes place. 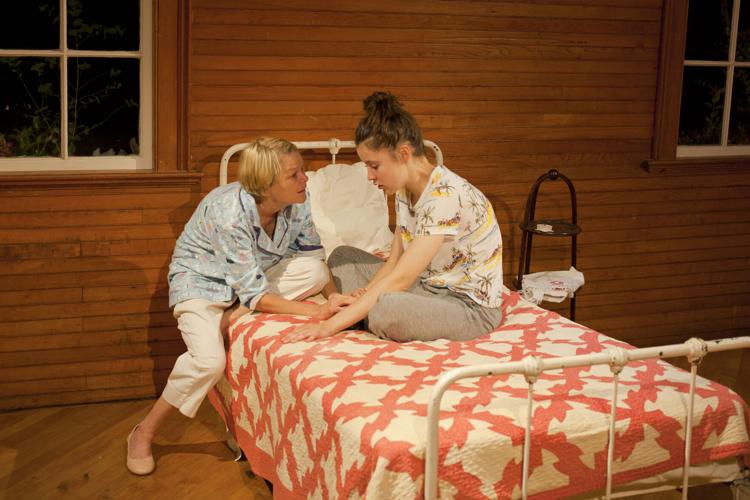 A scene from the 2018 Living Room Theatre production of “Three Sisters,” by Lucy Caldwell and directed by Christopher McCann, with actors Monique Vukovic and Oona Roche. 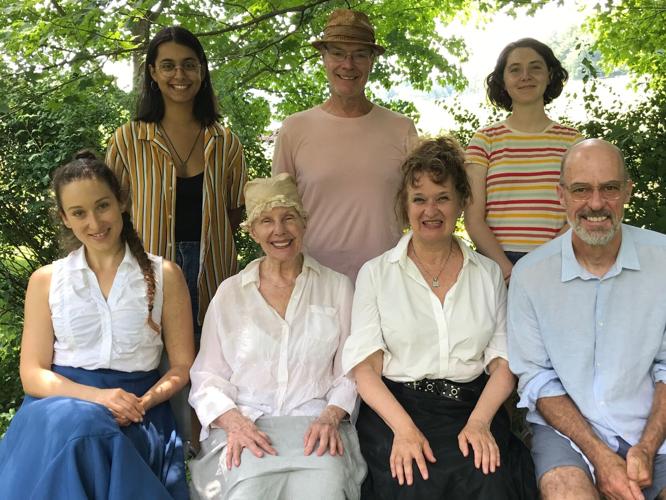 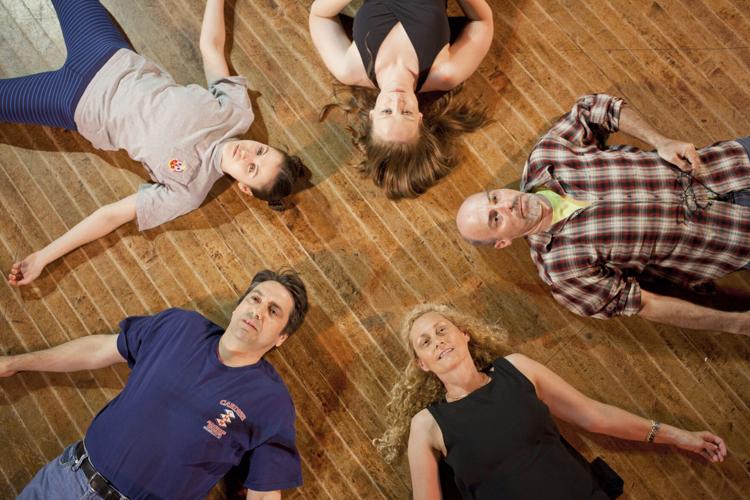 Cast and crew of a past Living Room Theatre production at one of their daily communal meals where the creative process is highly encouraged to continue off stage.

Just a stone's throw from where the Living Room Theatre cast and crew enjoy communal meals on the grounds of the Park-McCullough House in North Bennington, set backdrop construction and other technical preparation also takes place.

A scene from the 2018 Living Room Theatre production of “Three Sisters,” by Lucy Caldwell and directed by Christopher McCann, with actors Monique Vukovic and Oona Roche.

NORTH BENNINGTON — Co-founders and co artistic directors — as well as husband and wife — Randolyn Zinn and Allen McCullough had an inspiration in 2012: stage a play in their summer home of North Bennington, far from New York City where they have been active on stage and as teachers of acting for decades.

On July 8, the indefatigable acting troupe will open its 10th anniversary season with an outdoors presentation of Lucas Hnath’s “A Doll’s House, Part 2,” the acclaimed contemporary reimagination of Henrik Ibsen’s 1873 classic, to be directed by Kirk Jackson.

The couple’s farmhouse is on the original grounds of the Park-McCullough Historic Governor’s Mansion, which offered outdoor opportunities and the mansion’s carriage house to produce plays. McCullough is a direct descendant of the original family estate owners, who were prominent Vermont business people and politicians in the 19th century.

After this landmark season, and having taken a hiatus during the worst of the COVID-19 pandemic, Living Room Theatre will have produced a dozen plays, plus, in the fall of 2016, one off-Broadway run.

Actor-director Christopher McCann said the company’s durability comes from a sense of “familial nourishment,” alluding to the practice of the entire cast and crew living, eating, working, rehearsing and creating together in the many weeks surrounding a production.

“The McCullough-Zinn home opens up to all the artists assembled,” McCann said. “The work merges into the meals, the playtime, the breakfast-lunch-dinner cooking, the martini-hut hour, the post-dinner dishwashing, the post-rehearsal kibitzing, post-performance uncorking. This is a retreat from the quotidian world that theater artists face during their year.”

The right time and place

Such a physical and spiritual retreat fosters intimacy among Living Room Theatre’s cast and crew and perhaps makes “A Doll House, Part 2” a sound choice for pandemic emergence because it brings home deeply human themes centered on societal roles.

Henrik Ibsen’s original “A Doll House” is set in a Norwegian town circa 1879. The play is important for the manner it takes with the fate of a married woman, Nora, finding her voice and independence. As in much of the world at the time, 19th-century Norway lacked reasonable opportunities for self-fulfillment in a male-dominated world, a notion which made it controversial and well-known past just the world of theater.

In “Part 2,” Hnath brings the story 15 years later, and has Nora come back to assess the effects of walking away from her old life in the original play.

Jackson indicated that the same societal rules apply in “Part 2” but the 15 fictional and 140 real years since Ibsen’s original have emboldened the characters to put societal propriety aside and really fight for their personal points of view.

“Twenty-first century individualism, or at least its attempt, vies with 19th-century decorum,” Jackson said. “And, of course, that makes us encounter all the [so-called] rules that haven’t changed as much as we might like, especially as regards the central character Nora’s struggle for gender parity.”

The cast will be Zinn as Nora, McCullough as Torvald, Gaia Visnar as Emmy and Janice Young as Anne Marie. The play will run 90 minutes, with no intermission.

Living Room Theatre’s now well-known production innovation carried over into the play’s staging. Months ago, planning had taken into account COVID-19 protocols to include socially distanced seating, mask wearing and an outdoor show.

Today, since the cast and crew are all fully vaccinated, and Vermont’s state of emergency has been lifted as a result of its nation-leading vaccination rate, Living Room Theatre has adjusted accordingly by making mask wearing optional, not mandatory, for attendance.

McCullough said that the idea of conducting theater in the round, or mostly 360-degree seating, was on everyone’s mind — as was the abandoned swimming pool on the farmhouse property.

“[Jackson] suggested the pool [as a stage] and the idea grew,” Allen said. “Making it stage worthy has been more complicated than we’d imagined, and many people have been involved to make it happen. Now that it’s ready, it’s like a dollhouse roof has been lifted off.”

Jackson concurred with Allen, calling his past experience with theater in the round “immediately authentic and honest.”

“I’ve staged plays in the round with the audience looking down, before … never in an empty pool, but with a similar relationship between audience and actor,” Jackson said. “And looking down creates a sense of examination, like a surgical theater or looking into a microscope.”

Hnath, Jackson continued, literally states the challenge in his stage directions: “I wouldn’t be sad at all if the play were played in the round.” But then, Hnath also states that having a door is “crucial.”

Out of the shadows

Zinn said she is being told almost daily from people calling in for ticket reservations how “A Doll House, Part 2” will be the first play those fans of the stage will have attended since the pandemic began in early 2020.

“Theaters and theater artists have suffered tremendously during the pandemic,” Zinn said. “Employment opportunities vanished so everyone was scrambling. We’re glad to be able to offer work to at least a small group. Our donors rallied to help mount this production and we’re extremely grateful to them. The audience members are so ready for this.”

Walking toward the farmhouse for another dusk outdoors dining with cast and crew, Zinn wore a smile: content, but also ready to work again. The echoes of her company members filled the evening air in much the way they will resound this time next week, on opening night.

Company member Mike Broadhurst, speaking perhaps for all the Living Room Theatre stalwarts toiling away to stage “A Doll’s House, Part 2,” summed up the troupe’s ethos, which he claimed has made it last, and thrive, into its 10th season.

“Writers and other artists have retreats to hone their craft where they find creative rejuvenation,” Broadhurst said. “Such opportunities are virtually non-existent for actors, except at LRT where I can participate in high-level artistic productions while getting away from the more constraining aspects of the industry. Living Room Theatre allows me to rediscover why I went into the field in the first place.”