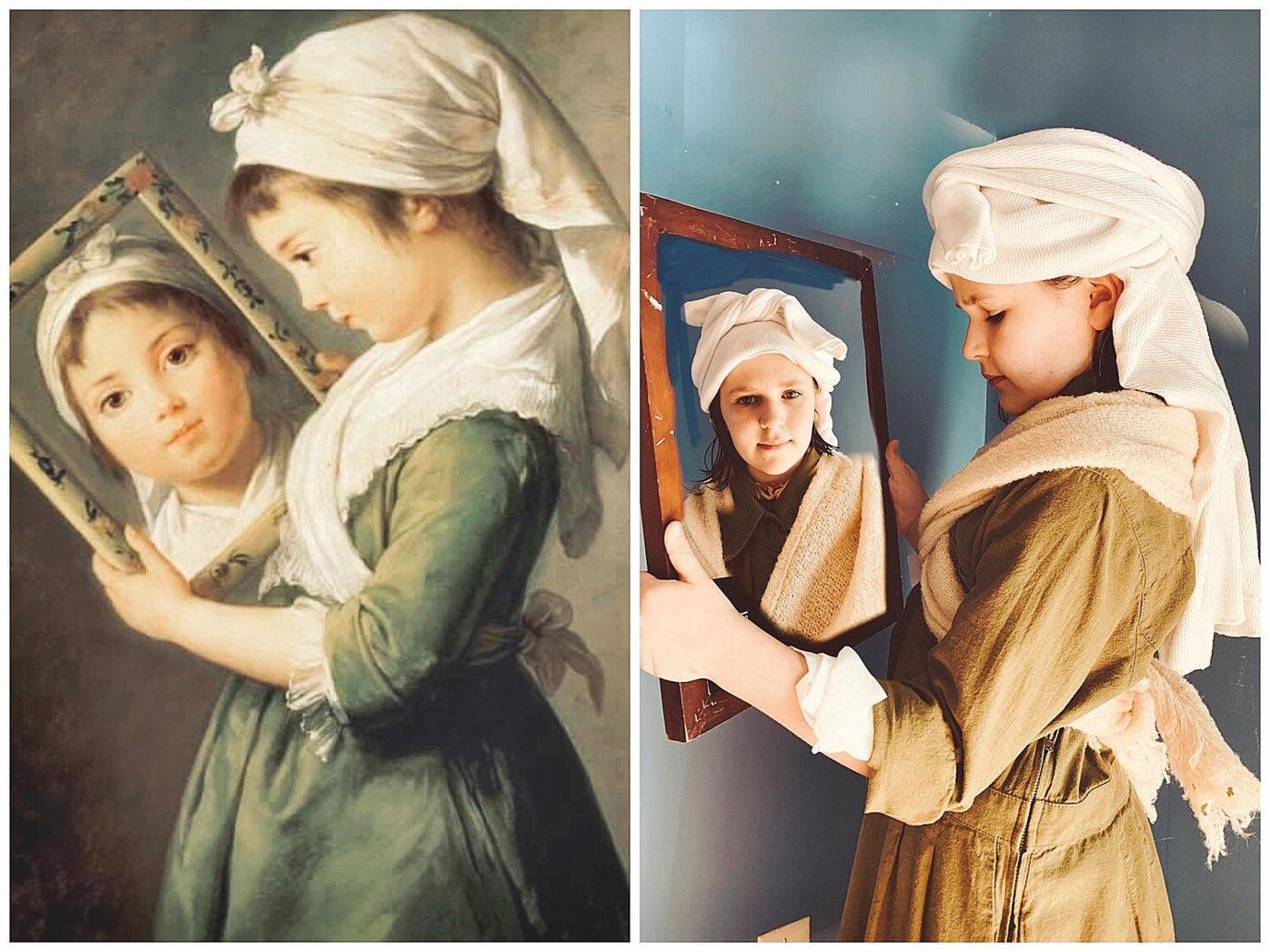 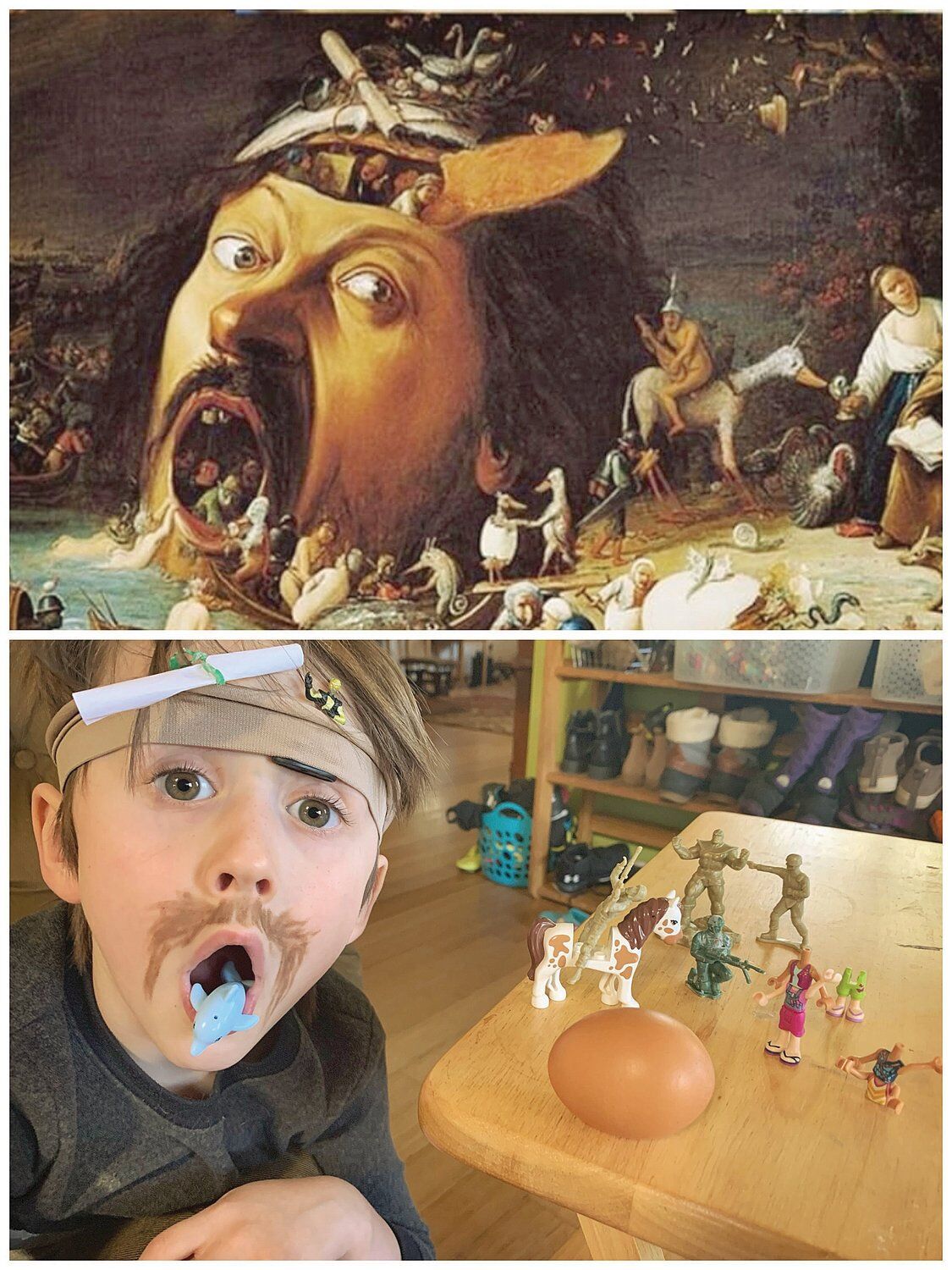 Graham Scaggs, bottom, in a recreation of "Temptation of Saint Anthony" by Joos van Craesbeeck. 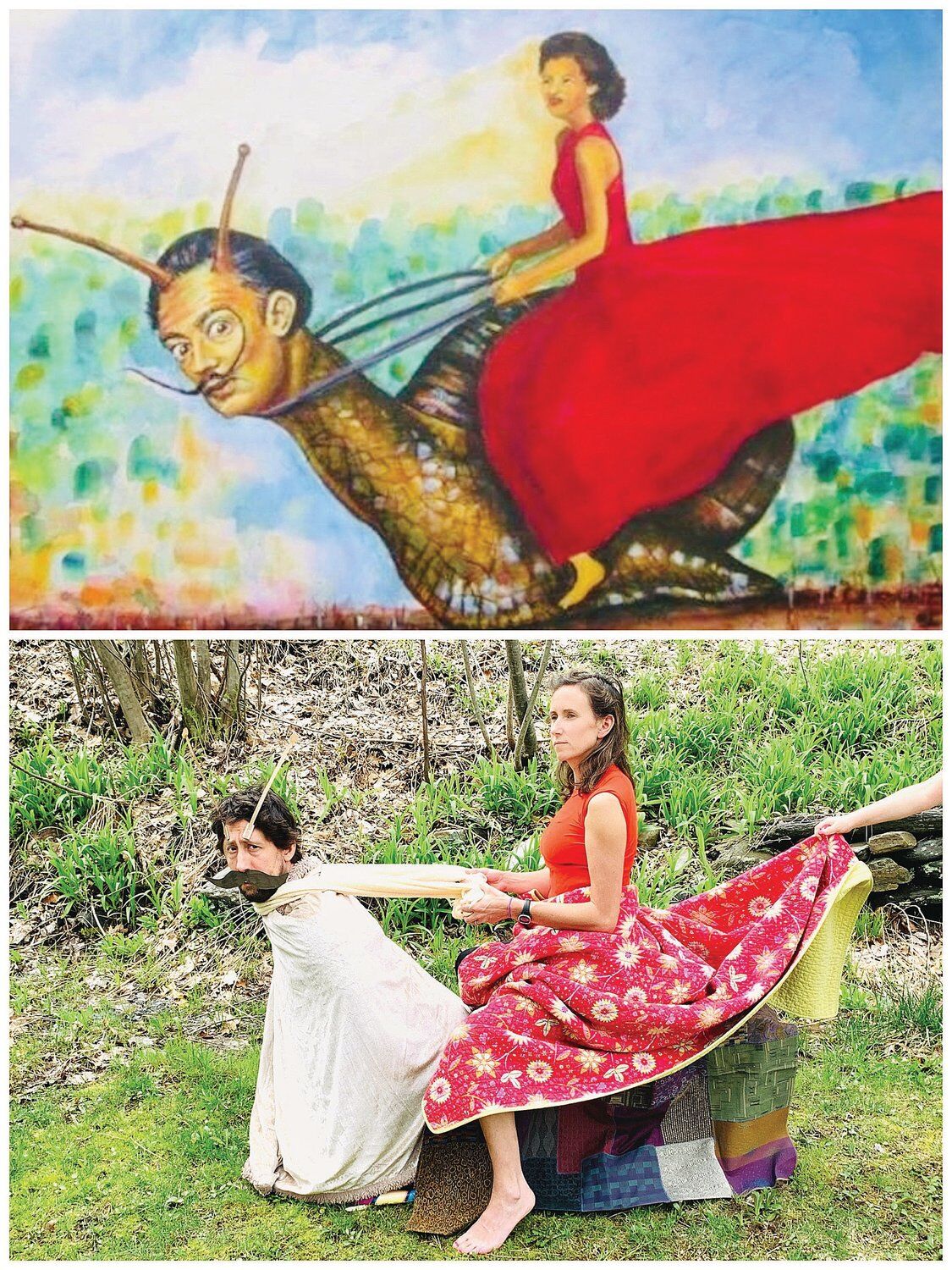 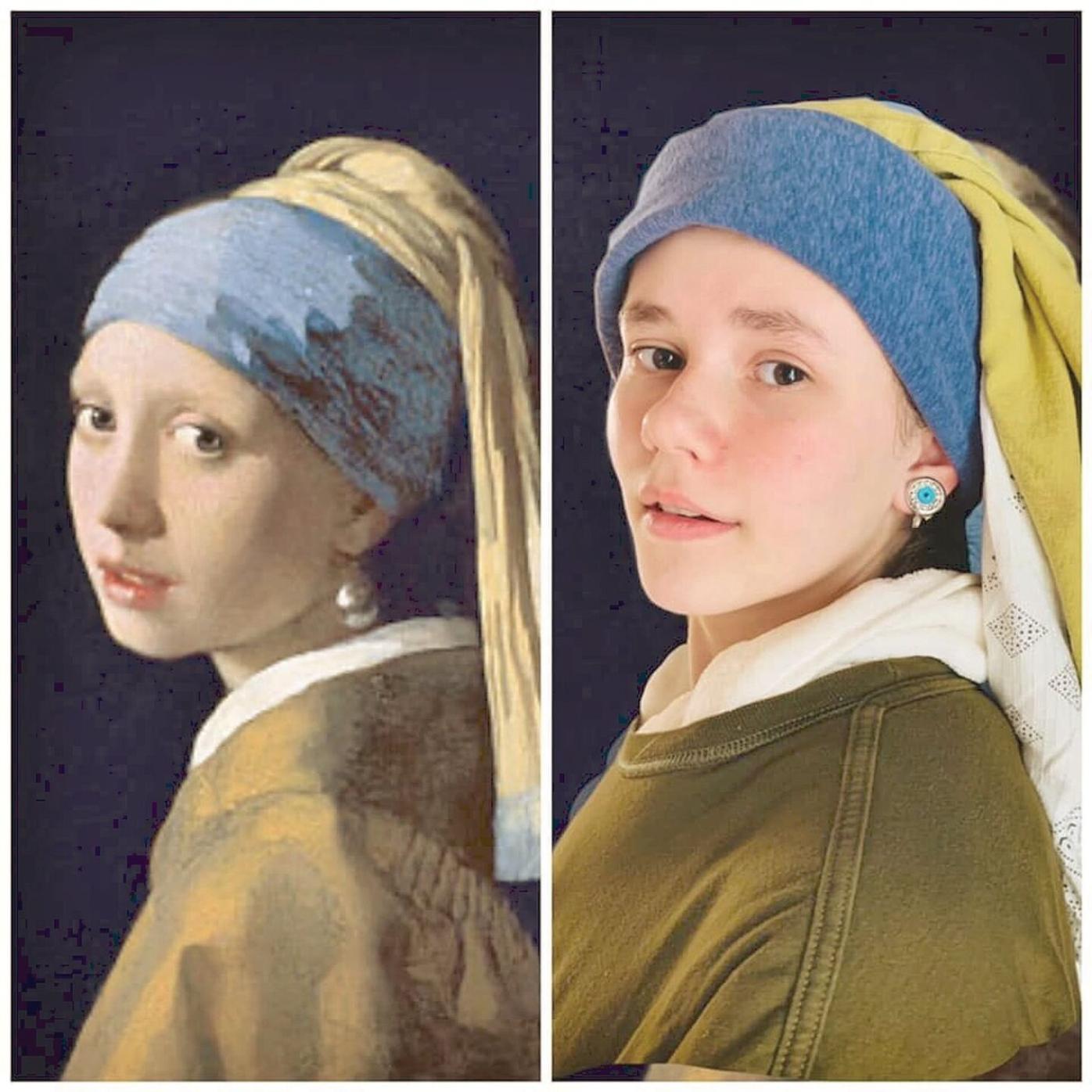 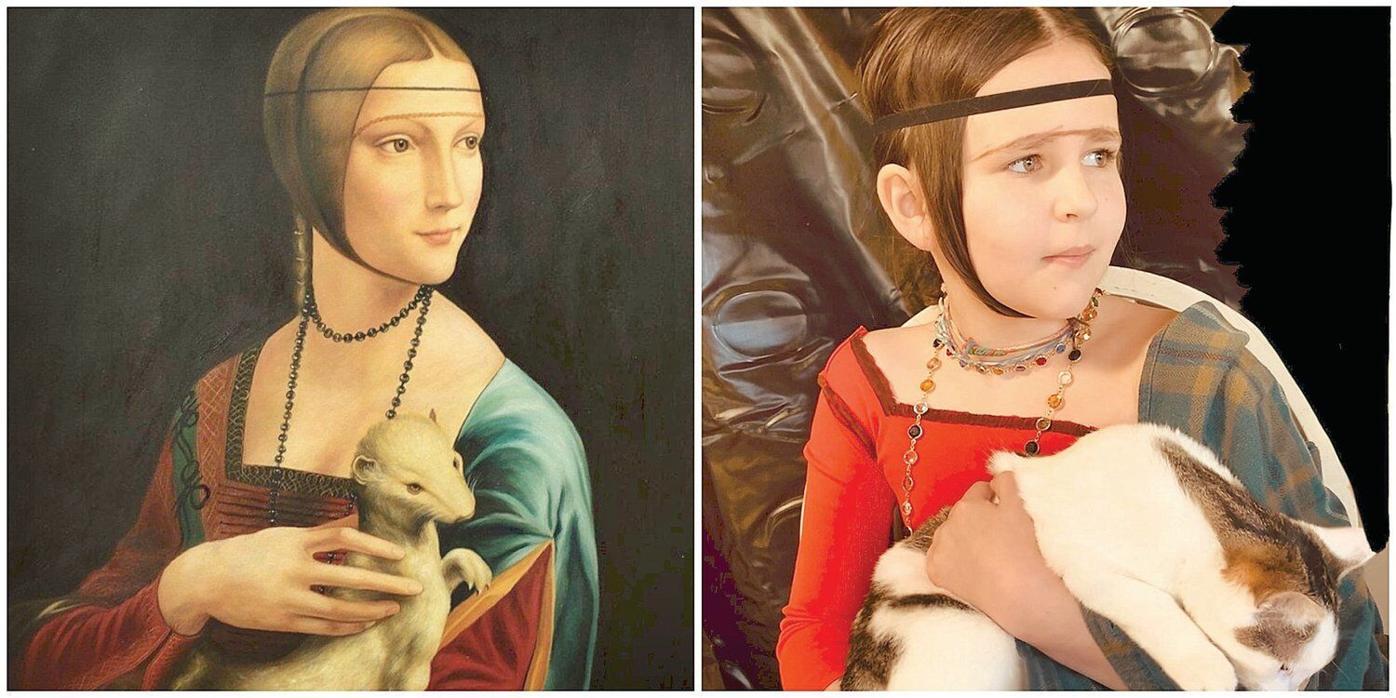 Pearl Scaggs and family cat Karen pose for "Lady with an Ermine" by Leonardo da Vinci. 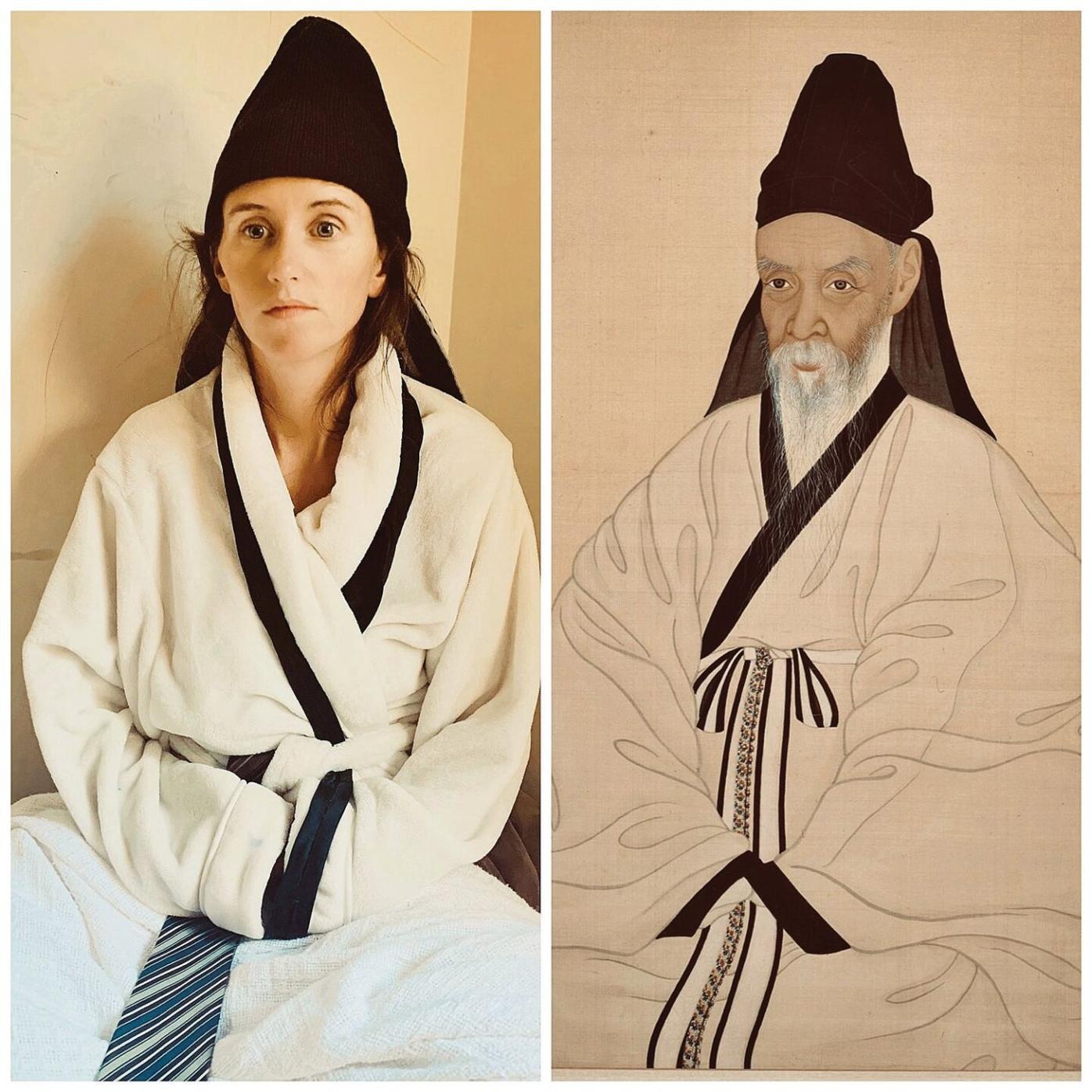 Erin Scaggs recreates the cover of “Treasures from Korea: Arts and Culture of the Joseon Dynasty, 1392-1910”. 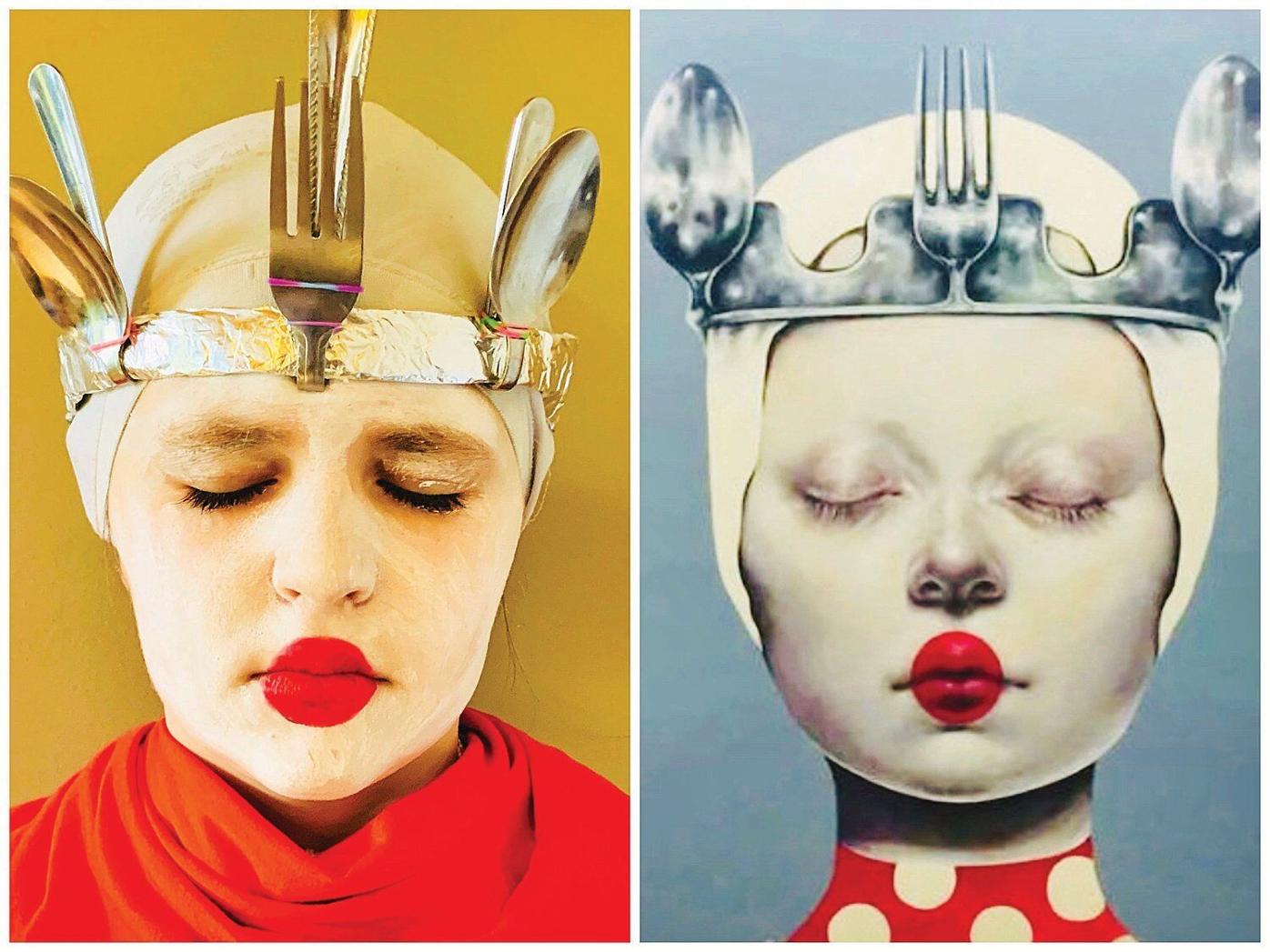 Pearl Scaggs, left, is the subject in a recreation of Afarin Sajedi's "Feast". 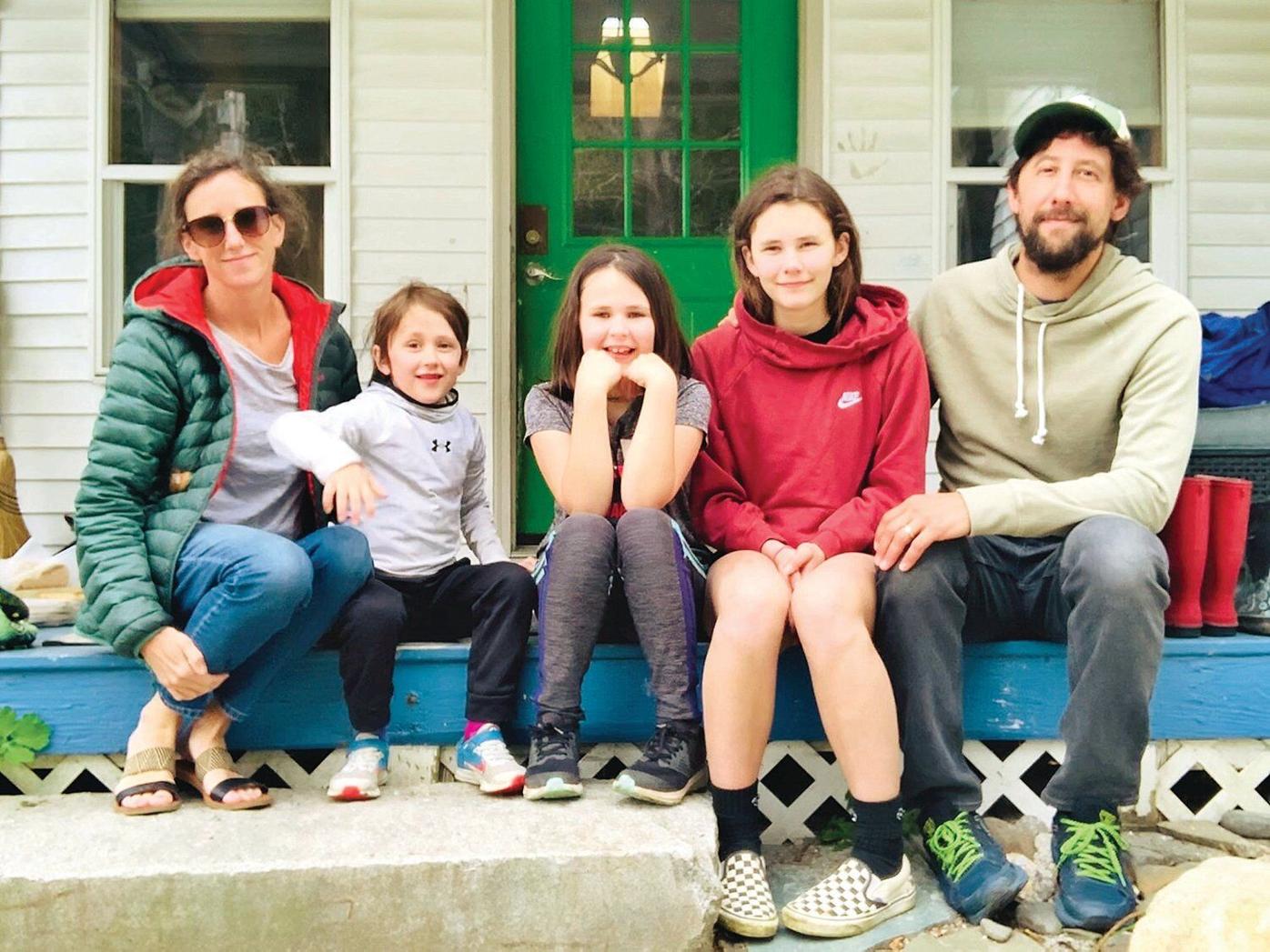 The Scaggs family poses without props or costumes: From left, Erin, Graham, Pearl, Ella and Jason.

Graham Scaggs, bottom, in a recreation of "Temptation of Saint Anthony" by Joos van Craesbeeck.

Pearl Scaggs and family cat Karen pose for "Lady with an Ermine" by Leonardo da Vinci.

Erin Scaggs recreates the cover of “Treasures from Korea: Arts and Culture of the Joseon Dynasty, 1392-1910”.

Pearl Scaggs, left, is the subject in a recreation of Afarin Sajedi's "Feast".

The Scaggs family poses without props or costumes: From left, Erin, Graham, Pearl, Ella and Jason.

WEST CHESTERFIELD, N.H. — In typical times, the Scaggs are a busy family.

Erin Scaggs is a restaurant owner, concert organizer and community activist. Jason Scaggs is a carpenter and musician, and he runs audio and lighting at The Stone Church concert venue in Brattleboro. They are also the parents of three young children involved in school activities and youth sports.

But these are anything but typical times for the Scaggs.

Erin's restaurant, Elliot Street Fish, Chips & More in Brattleboro, has been closed until recently because of the COVID-19 pandemic. Jason's work has been limited as well, and the children — daughters Ella, 14, and Pearl, 8, and son Graham, 6 — have been stuck at home with laptops and virtual learning plans.

But the Scaggs have found a creative, ambitious and often humorous way to pass the time during this self-imposed quarantine: through "homemade" interpretations of iconic or obscure artworks, which they then photograph and post on Facebook, side-by-side with the originals.

"I love to laugh," Erin Scaggs said in a recent Zoom interview. "I try to be laughing all the time, and I want to make people around me laugh, so this is one way of doing that."

The idea came from a challenge, issued by the J. Paul Getty Museum in Los Angeles and picked up by the Metropolitan Museum of Art in New York, among others, which has people recreating classic paintings with anything they can find at home while self-isolating.

"I am a person with a very short attention span, and when I see something fun and shiny, I just sort of gravitate towards it," Erin said. "I saw this (idea) and thought, 'Oh my gosh, that's hilarious, I want to do that.' I mean, I saw somebody being hoisted by a crane with a broom and he was pretending to be Harry Potter, and I wanted to do that, but I don't have a crane."

"That's a slight drawback," Jason added with a laugh.

"But I do have a family that's accommodating and enabling," Erin said, "and this was something they could help me with. (The kids) have been somewhat willing, sometimes more than others. Sometimes I'm twisting their arms, like, 'C'mon, let me dress you up and take pictures, let's be silly,' but a lot of the time they have fun doing it. There's not a lot else going on, so they're kind of a captive audience at this point."

The Scaggs also have ample amounts of wardrobe, face paint left over from Halloween, toys and everyday household items they can use to recreate images such as Afarin Sajedi's "Feast," in which daughter Pearl posed with a silverware "crown" made from a headband, tin foil and some cutlery.

"I don't think we've thrown away a blanket in, like, a decade," Erin said, "and you would be surprised at how many of these you can recreate with just sheets and blankets. Some of them we have had to think more creatively. Some of them are really simple with very little props, and others are really quite detailed and really required a lot of hunting."

Erin said she does not have an art background, and many of the paintings were found through online Google searches for specific artists or types of art. "Sometimes it's because one of the people in the paintings will resemble one of the kids, and so they might be excited to try that one," she said. "Sometimes they'll see a prop or an aspect of a painting that they'll be like, 'Oh my gosh, we have a blanket that looks exactly like that, or I have a dress that looks exactly like that.'"

One painting that son Graham chose was the Hieronymus Bosch-inspired "Temptation of Saint Anthony" by Joos van Craesbeeck. "It's a closeup of a guy's face next to a table and he's eating things and there's something in his mouth and there's like a scroll on his head," Erin said. "That one was just whacked, and (Graham) thought it would be hilarious to pose with all these Legos and an egg.

To recreate the bizarre "Salvador Dali and Gala" by Nikola Golubovski, Jason dressed up as a Dali-faced snail with Erin riding him horseback-style. "He gets extra points for being a good sport in that one," Erin said of Jason.

"I'll get home most days and Erin's always trying to do some kind of photo shoot or had just finished one, or showing me pictures of what she took during the day," Jason said. "And then sometimes when I'm motivated enough, we'll do a shoot."

Erin said the project has been a lot of fun for the whole family, but it has also been educational — in fact, Ella's art teacher at Chesterfield School has incorporated the project into her curriculum, assigning her students to attempt their own recreations. "None of my kids are particularly art-focused," Erin said. "I have a bunch of sporty kids, so this has been sort of a departure for them in a nice way. It's also been a great way for us to pass the time.

"But, equally, I feel like the sharing of it, seeing people's response to it ... you wouldn't believe the number of people who have been, like, 'This is the highlight of my whole quarantine, looking each night for these pictures is getting me through this' — which sounds ridiculous, but sometimes it's just a little spark of positivity that can really make a big change. So I'm happy if what we're doing is in any way a representation of that."