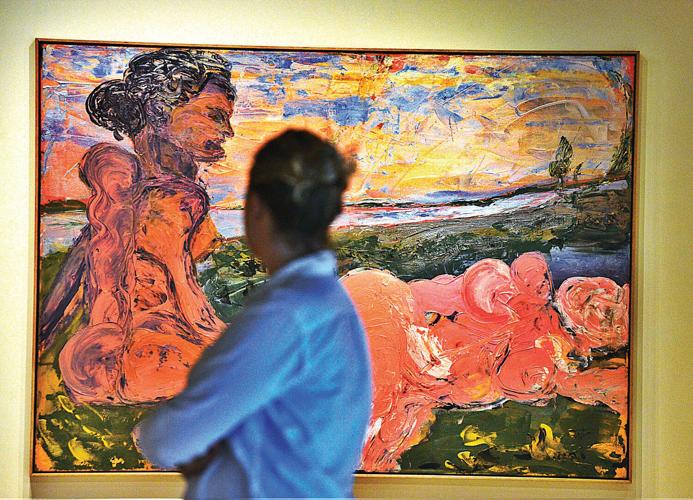 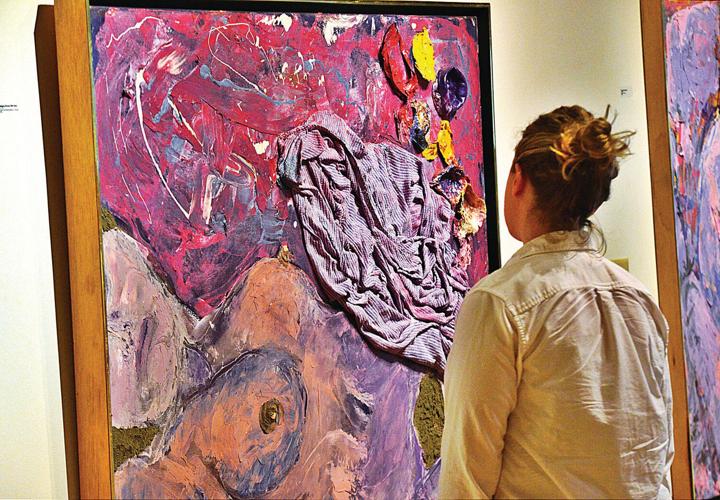 BRATTLEBORO — Lauren Olitski couldn't deny her DNA. Daughter of the late Jules Olitski, an American artist known for his stained and spray-painted abstractions, she first studied poetry at college in an effort to branch out in a different direction from her dad. But she couldn't shake his influence. She said, "The path kept calling," obtaining a Bachelor of Arts degree in 1979 and a Master of Arts degree in 1986. Today she is known for her bold expressions in abstract paintings. However, her exhibition "Figure 1993-2017," a collection of figures rendered in large-scale acrylic with mixed-media on canvas still on view at 118 Elliot through Oct. 30, shows a different side of Olitski, a side not well known.

Each piece is narrative based, telling a story, with many referencing biblical characters. In Olitski's desire to carry these stories onto the walls, she did her own curating, clear about which she wanted on hand and how they were to be lit. Each piece has a strong connection with the next one, creating flow and balance like page design only on a larger scale. Early thoughts about what to show wasn't originally about the figure, but ultimately Olitski wanted to show show female painters that it's about pleasing your own eye, so she featured two decades of figure paintings.

With a long list of solo and group exhibitions in New England and New York as well as Toronto and South Florida, this is the only show of her figure work, showing for the first time in Brattleboro.

Lisa Mendelsund, 118 Elliot's art gallery director for the last two years, met Olitski when curating "Big Stitches, Rough Cuts, Nothing Nice," for the gallery's March 2016 show. She pointed out that the only living forms in the exhibit are humans for which Olitski used live models, woman mostly. That may lead one to think the artist is male. Mendelsund admires that she does that and all of the technical aspects herself such as stretching canvas and building a new web site.

Mendelsund said, "I am hugely impressed by what she does."

What draws Olitski to anything, including the work in this show, is its connection to the human condition, something that can't be quantified, questions as abstract as her paintings including, "Why are we here?"

When she first came to abstract painting she was drawn to working with nature and the structure of the triangle. She said, "There is a danger when working from nature, to get drawn into what is recognizable, then the viewer steps away. It is my job as an artist to get the viewer to stop instead and really view it, to stay engaged." The challenge is to make a painting interesting. For her, it is all about light and structure, positive and negative space to draw the viewer in and hold them.

"I didn't get vigorous with paint until I got a good-size studio in 1990 in Marlboro," Olitski said. So many of the pieces in this exhibit produced from 1993 through 2017 are sizable, often with large subjects bleeding off the page as if cropped, compressing the space, making the art work.

To fully appreciate a piece one must step back, take in its continuity in composition, then step close again to appreciate the detail and texture. She creates texture with various sizes of large pizza spatulas rather than small palette knives, thus creating her signature bold strokes. To get color where she wants it, she manipulates the paint by flipping the large canvases around, banging the back. "You don't have time to overthink about things."

Mendelsund noted, "'Leah' is one of these pieces you want to stand back and want to get close. It has hints of landscape and a balance that doesn't hit you in the face."

A collection of three mixed-media pieces are from an experimental phase in Olitski's career on building up a surface using miscellaneous items, something she said she doesn't do now. But she finds it useful to not dismiss a period of experimentation. Her use of metallic and interference pigments to pick up light in several of those showcased reinforces her bold style. "I like to stretch art a bit to have a physical impact as well as visceral impact," she said.

Olitski respects the evolution of her paintings, to let them be and not to erase her development, but she is also not afraid to revisit a painting that doesn't sit quite right with her. "The Moods" is a prime example, 10 years in the making. Olitski reworked it for the exhibit. It takes courage to change a piece, knowing full well that it may either work or ruin what is already good. After pouring on new paint, adding gold to pull the whole thing together, she is happy with the change.

According to the gallery's press release, "Olitski brings a writer's sensibility to a muscular, modern vernacular. The paintings can be enjoyed for their narrative possibilities as well as their formal accompaniment in composition, gesture, and light."

Ultimately, "Painting is about me not telling you what you are looking at. The work is to be viewed, hopefully, felt. Don't get carried away searching for a 'meaning.' I don't." Olitsky said. But according to Mendelsund there were certainly many "paintingly" conversations about her art during the opening at 118 Elliot earlier this month.

The space at 118 Elliot is a community-based venue, attracting incidental eyes on the art exhibited there.

Lissa Weinmann, co-director of 118 Elliot said, "118 Elliot is always seeking productive partnerships with those who have a vision for the space that will serve the community. Lisa joining us as director of 118 Gallery brings the space into new territories each month for the many people who use the space who might not be 'gallery goers.' The intimate juxtaposition allows them to connect with the art and sometimes decide they want to take one home."