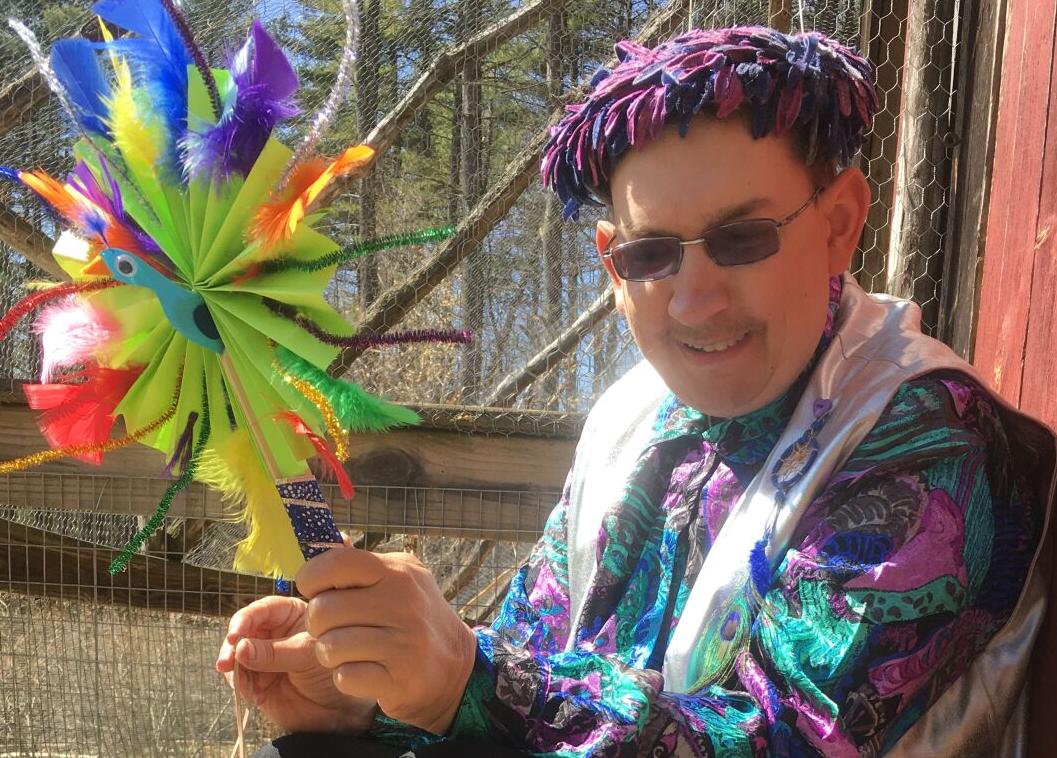 Troupe member Nathan poses with his puppet, Peacock, for "Daydreaming." 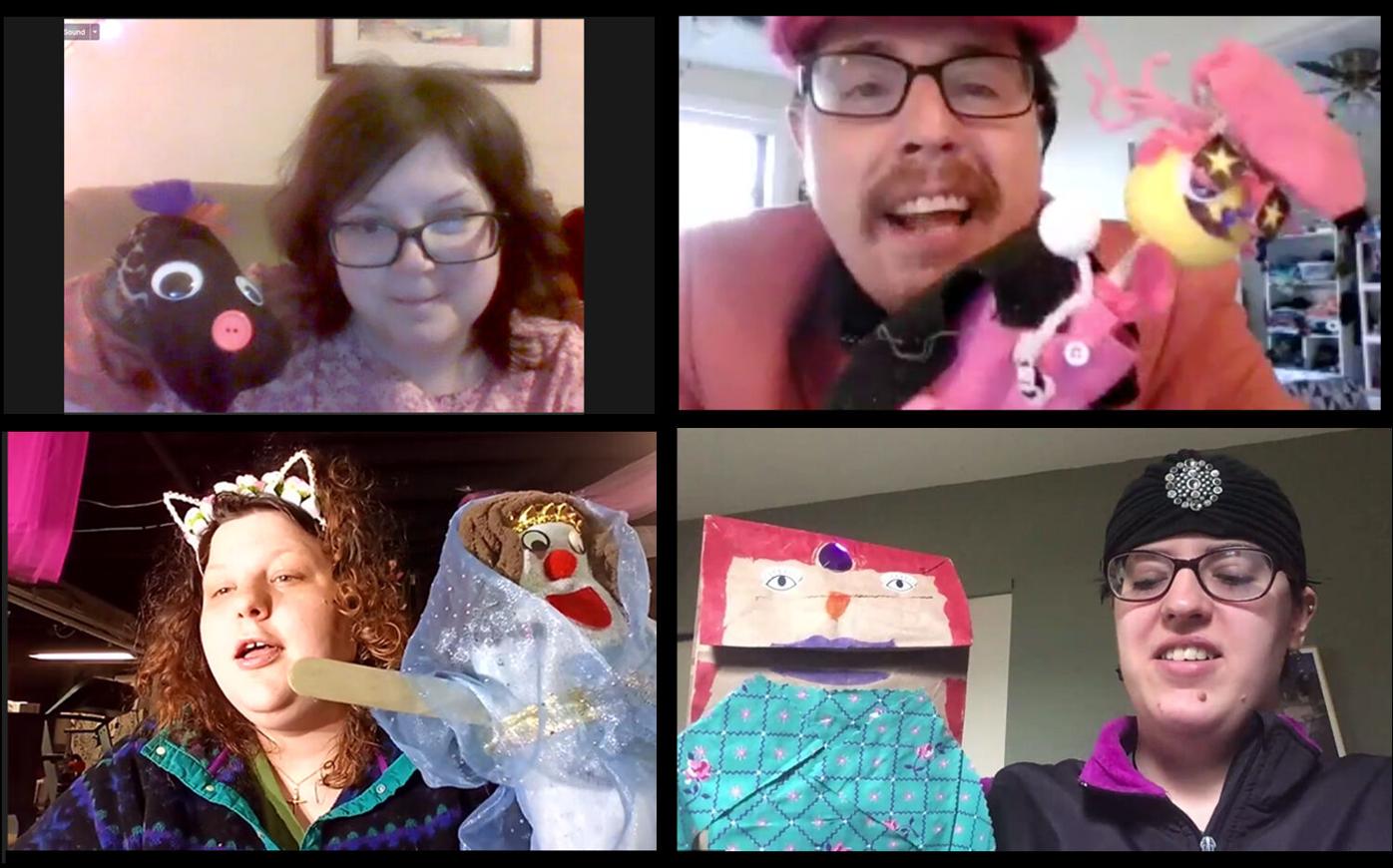 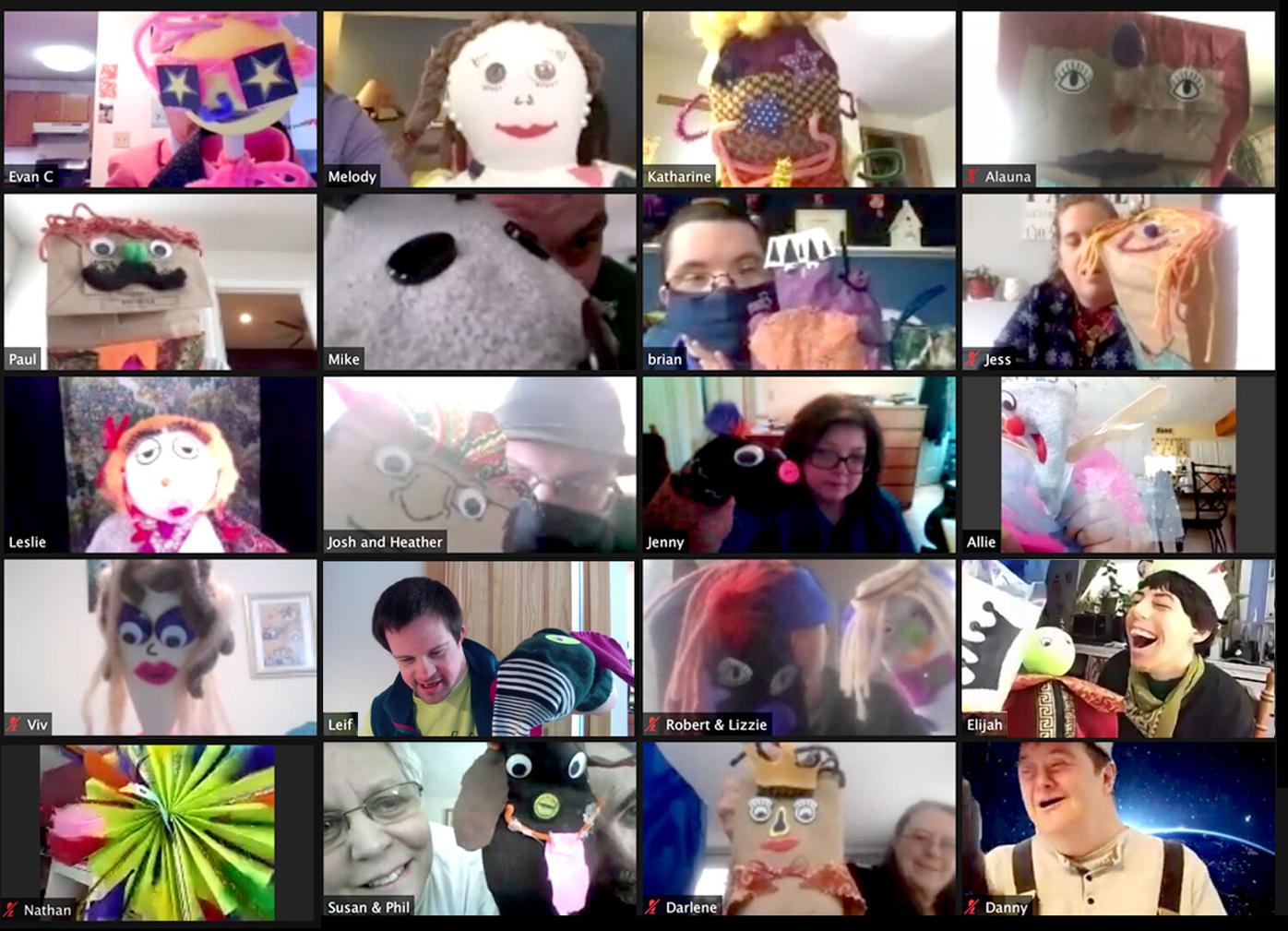 The cast of “Daydreaming” bring their puppets to life during a theater exercise.

Troupe member Nathan poses with his puppet, Peacock, for "Daydreaming."

The cast of “Daydreaming” bring their puppets to life during a theater exercise.

BRATTLEBORO — When the COVID-19 pandemic forced performance spaces to close last year, Theatre Adventure co-director Laura Lawson Tucker is proud to say the theater company for people with disabilities closed for just one week before starting back up, taking all rehearsals and performances online.

After some initial adjustment, most of the actors in the Brattleboro program were consistently participating via Zoom, Tucker said.

“They were amazing. They rallied with us,” Tucker said. “It was clear that we needed to keep Theatre Adventure going.”

“The Zoom window is the perfect size for a puppet, so we started exploring puppets in the summer,” Tucker said.

According to a show description, the puppet characters were developed to express the actors’ “dreams, passions, concerns and desires.”

For example, troupe member Alauna Boyer, 28, created a puppet called “Allyanna.” Allyanna is a psychic who can see all the bad news to come — making the good things in the present more enjoyable.

“I like immersing myself into my character. I’m pretty good at it, too. That’s what I like the most,” Boyer said in a Zoom interview.

Also planned is a performance of “Charlotte’s Web,” showing online May 12, 13 and 14 at 10:30 a.m. Previously, Theatre Adventure performed an original show called “Ordinary Heroes” in November. The virtual show is available for viewing on the Theatre Adventure website.

Member Jenny Rainville, 34, said the online rehearsals and shows provide an opportunity for connection in an otherwise isolating time.

“Acting over Zoom — it’s great because you can connect with everybody still, even if you’re not all together in person,” she said. “It’s just fun, and otherwise, there’s really not much going on, so it’s kind of good to have theater happening.”

Theatre Adventure began as a summer program under New England Youth Theatre in 2004. About a year and a half ago, Theatre Adventure became its own nonprofit organization, and now has 30 students ranging in age from their 20s to 60s from Southern Vermont, Massachusetts, New Hampshire and Connecticut. This year, the organization was awarded four grants — from the Puffin Foundation, Windham Foundation, Brattleboro Town Arts Fund and the Vermont Community Foundation Crosby-Gannett Fund — to support its online programming.

Before the COVID-19 pandemic, rehearsals took place in the West Village Meeting House on South Street in West Brattleboro. Past performances include “Shrek,” “The Wizard of Oz,” “Twelfth Night” and “Stagestruck!” — an adaption of the musical “The Music Man.”

Tucker said art, in all forms, provides opportunities for people with disabilities to express themselves. She noted that individuals who have challenges with spoken language often have a lot to say.

“We have a lot of students who have a strong command of spoken language, as well, but there is just something very powerful about expressive arts that invite discovery of self,” Tucker said. The arts help “folks who might otherwise look or sound different to be recognized as, ‘Oh my gosh, there is an artist’ — someone who has something really awesome to express.”

Tucker co-founded Theatre Adventure with Darlene Jenson of Brattleboro. Jenson’s son, Elijah, who has special needs, was a student in Tucker’s early childhood education program at her home in Guilford when Jenson showed Tucker a video of a performance at an Easterseals school in Pennsylvania.

“Laura was like, ‘We have to do this in Brattleboro,’” Jenson recalled.

At that time, Jenson said she could not find any local arts programs designed specifically for people with disabilities.

Elijah, then 10, became one of the first actors in Theatre Adventure, and is still a troupe member at age 27.

Jenson, co-director and disabilities specialist for Theatre Adventure, said watching how Elijah responded to his peers helped inform her teaching.

“I have to observe him because he makes a lot of sounds and he communicates a lot, but I don’t always know specifically what he is trying to tell me because his speech isn’t refined,” Jenson explained. “He is definitely, in his mind, saying words and communicating things, but I have to watch what he is doing and observe him.”

Through this observation, she soon learned about her son’s capabilities as an attentive audience member.

“From the very beginning, he was very capable to sit there and listen to 11 other students share something, and he was on the edge of his seat,” Jenson said. “He was showing me how this program was helping him learn how to focus and give his attention to other people.

Troupe members’ experiencesBoyer, of Dummerston, joined Theatre Adventure in 2016, having learned about the program from another member, Susan Mandell.

“I talked about it with my home provider, and we thought this might be a good thing to try,” Boyer said. “It worked out really well.”

Tucker said she has observed Boyer become more outgoing through the program. When Boyer first arrived at Theatre Adventure, Tucker recalled, the young woman would bring a book to read before class — a time when troupe members are encouraged to socialize.

“She pretty soon figured out that, actually, we want to get to know you,” Tucker said. “She figured out she could leave her book in the car, and that was OK.”

Tucker noted that an important focus of Theatre Adventure is nurturing a culture of acceptance.

“What’s really good is that for so many of our students, they have been the target of ridicule and bullying and just terrible things, and I think what they learn pretty quickly in Theatre Adventure is they can count on our environment to be free of that terrible harassment,” she said. “We don’t permit it.”

On the Zoom call with Boyer and Rainville, also of Dummerston, was Evan Cross, 35, of Brattleboro. Cross joined Theatre Adventure in 2008, through Families First, a Brattleboro program for people with special needs.

Tucker noted that Cross was one of the first adult participants. He said his favorite roles include the salesman in “Stagestruck!” and the scarecrow from “The Wizard of Oz.”

Rainville joined the program in 2012.

“I feel like it’s been eons ago that I joined Theatre Adventure,” she said. “I moved up here from Massachusetts, so I was looking to check out something in the neighborhood, and a friend said, ‘Hey, how about Theatre Adventure?’ I checked it out and talked to Laura and, yeah, like Alauna, it’s worked out beautiful.”

More information about Theatre Adventure and tickets for the upcoming performances are available online at theatreadventure.org.