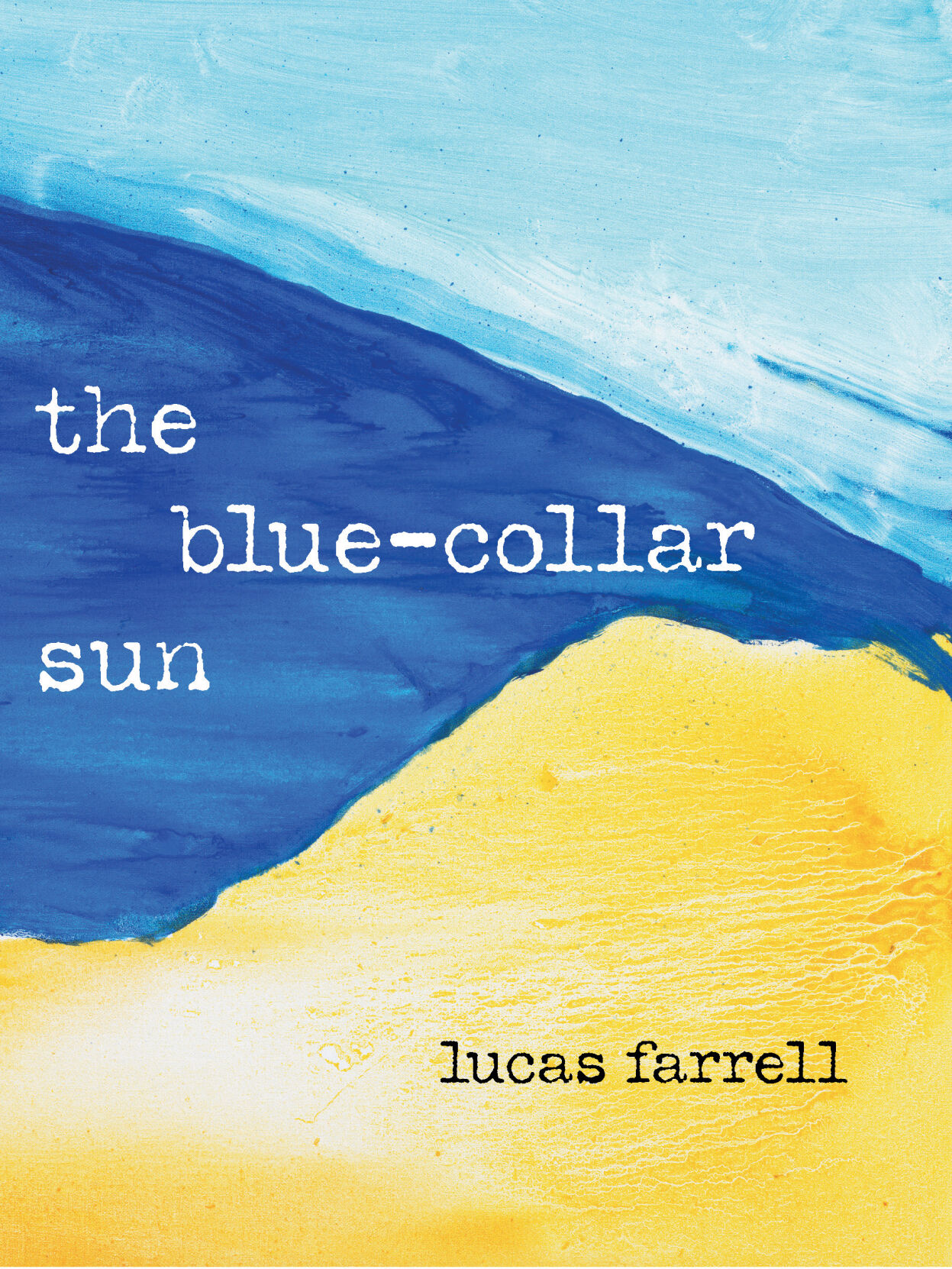 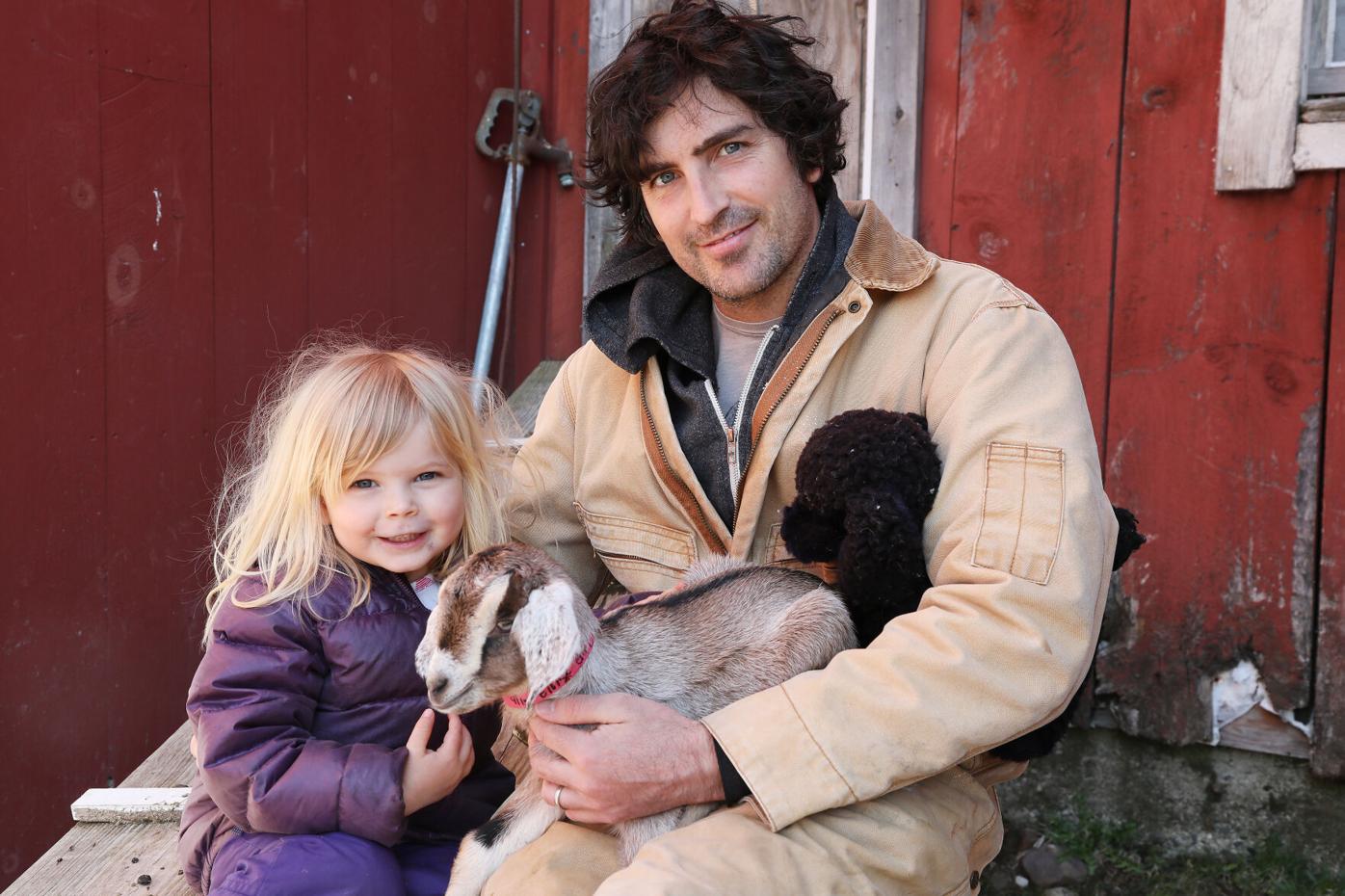 Lucas Farrell and his daughter, Maisie, with a kid at Big Picture Farm. 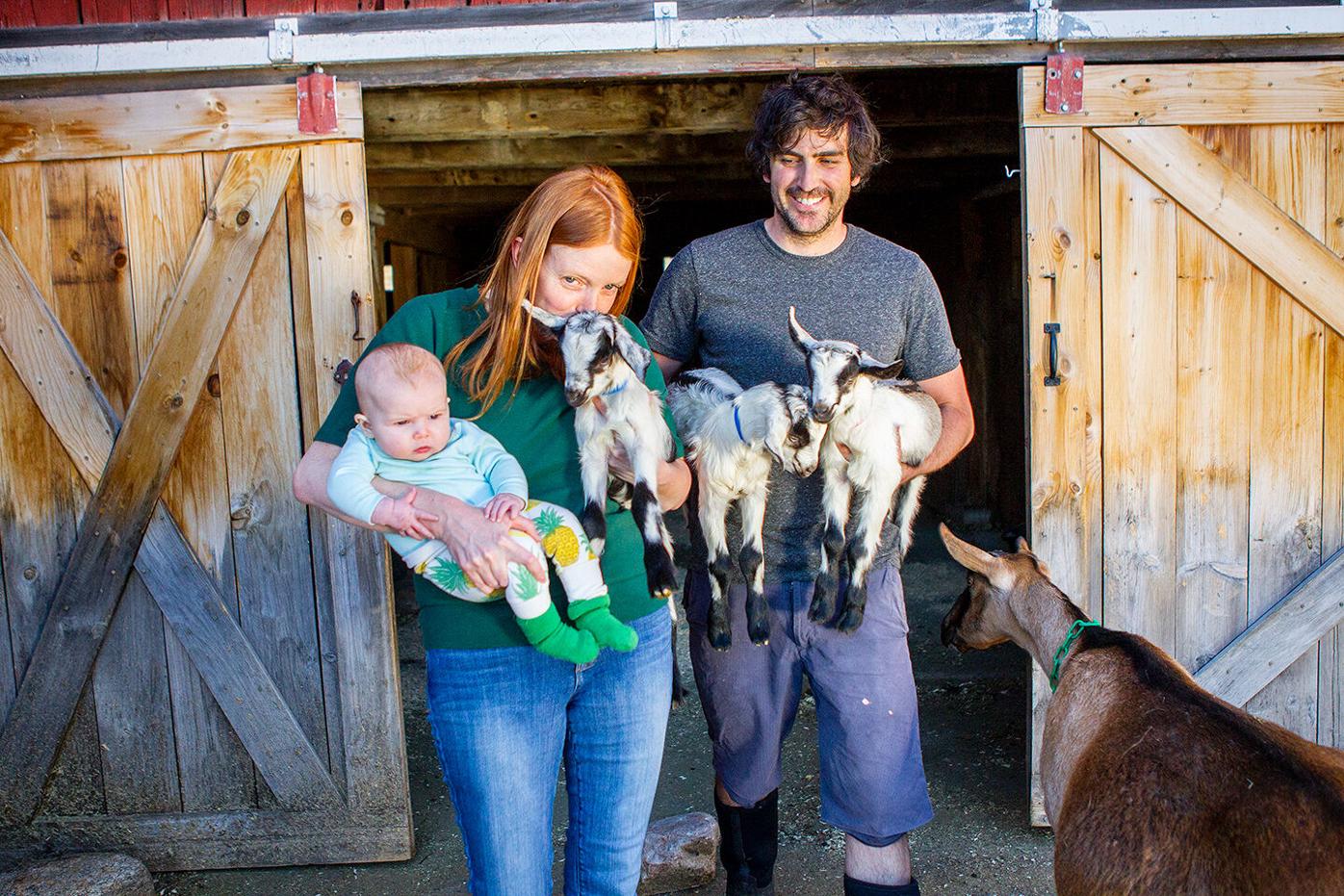 Lucas Farrell, Louisa Conrad and their daughter, Maisie as a baby with goats on Big Picture Farm in Townshend. 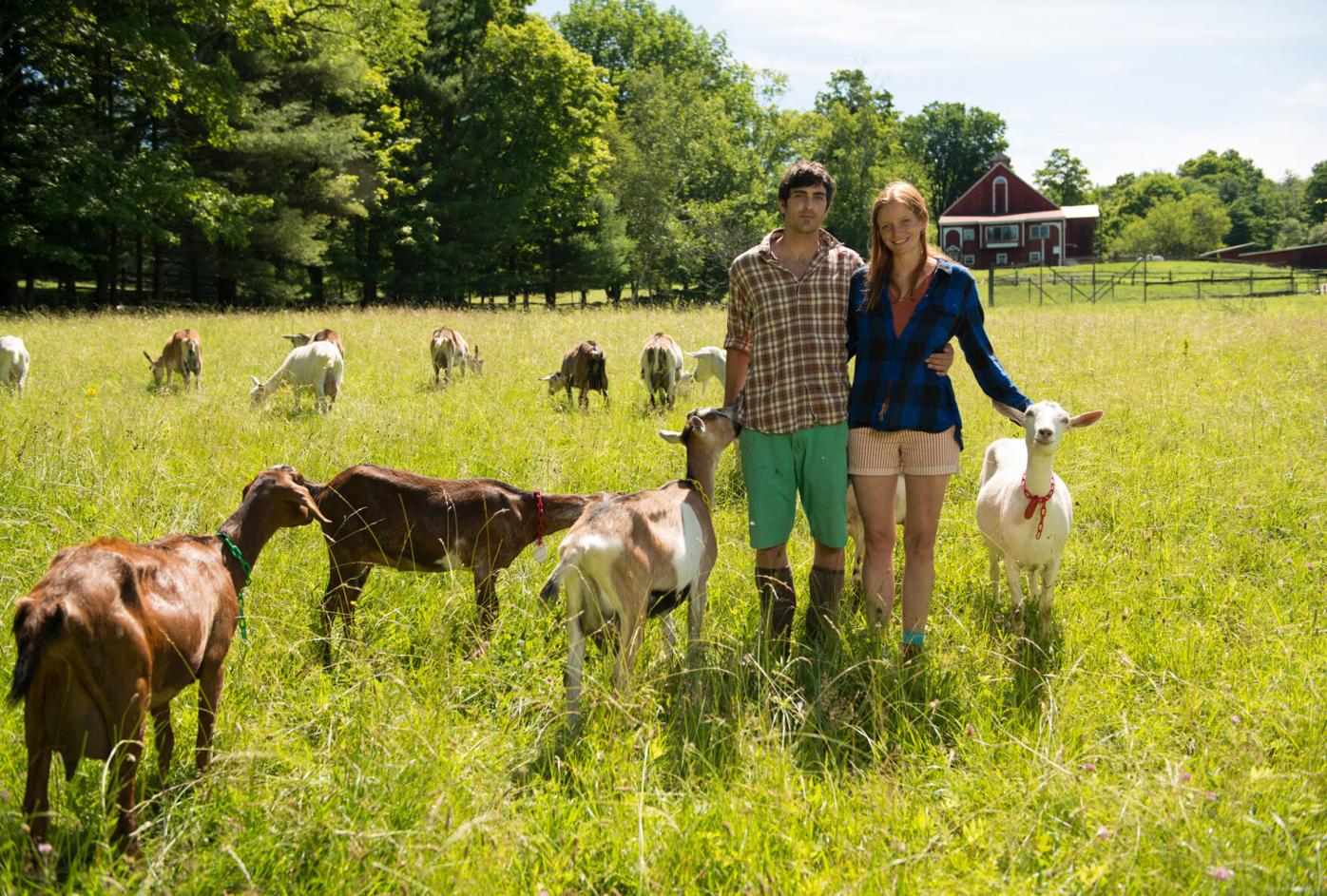 Lucas Farrell and his daughter, Maisie, with a kid at Big Picture Farm.

Lucas Farrell, Louisa Conrad and their daughter, Maisie as a baby with goats on Big Picture Farm in Townshend.

TOWNSHEND — On a trip to Iceland in 2009, poet Lucas Farrell’s wife, artist Louisa Conrad, brought him a fish hook that had pierced the bottom of her boot. The hook sat on his desk for a while as he wrote.

“And then everything I was writing kept steering back to that hook,” Farrell, 39, recalled recently.

His meditations on the fish hook would become the fourth and final section of “the blue-collar sun,” the manuscript that won the Townshend farmer the 2020 Sundog Poetry Book Award for a first or second manuscript by a Vermont poet. This was the first year of the contest, designed to highlight emerging writers.

Farrell’s book will be published in March in partnership with Green Writers Press of Brattleboro. His award also includes a $500 cash prize, 50 copies, a featured reading at the Associated Writing Programs Conference in March and a major book launch in Vermont in April.

Neil Shepard, board president of Sundog Poetry Center in Johnson, said a poet’s first book is often collaborative, having been “combed over, many times, by one’s workshop mentors and peers,” and the second book of poetry is more fully one’s own.

“Our mission at the Sundog Poetry Center is to provide opportunities for a wide range of Vermont poets, so it seemed right to offer something specifically for emerging writers,” Shepard said. The organization aims to promote poetry as an art form and support Vermont poets through workshops, readings and publication.

Farrell, who with Conrad owns and operates Big Picture Farm, is also author of “The Many Woods of Grief,” which was awarded the Juniper Prize for Poetry and published by University of Massachusetts Press.

The first section, written most recently, contains one-page prose poems. The second is a section of erasures, which is a genre of poems that begins with a work by someone else and extracts words from the page until a poem appears. The work Farrell started with was “Under the Glacier” by Halldor Laxness. The third section is one long poem he describes as a “surrealistic fable” that shows a post-apocalyptic view of the world, and the fourth section, which includes the fish hook, is a lyric essay with photos his wife took in Iceland.

Dede Cummings, of Green Writers Press, said she normally does not print in color, but after seeing the photos in the last section, made an exception.

“Because of the red of the blood of the fish — it’s kind of related to the writing in such a way, when I looked at it, I said to him, ‘We’re going to print this in color,’” she said.

Cummings noted that the painting on the cover of “the blue-collar sun” is by the Brattleboro artist Emily Mason, who was married to artist Wolf Kahn. Mason died in December 2019, and Kahn in March 2020.

Cummings’ favorite passages from “the blue-collar sun” include the opening poem, “Ice Storm.” She quotes the lines:

… who is this place, why did it home here,

where’s the beginning, now hurt me. There is an

“The poet is in the world; he is an observer and a participant, as all great poets are, but there is a modern slant to Lucas’ writing, an edge,” she said. “Even though he says it is an ‘honest-to-god answer,’ we know as readers that we are in for a journey, and it might not be an easy right. The hurt is there, always.”

She also highlights the prose poems “Sugaring,” about which she said, “the poet stops everything to listen whilst doing a chore on the farm; he listens with all his senses, his memory, his future” and “Landscaping,” in which the acts of listening, observing and doing simple tasks, she said, “turn into a death march.”

“That is what makes Farrell’s work surprising, uninhibited,” Cummings said. “He is not playing by the rules, and this book shows us a poet who is maturing all the same.”

Shepard, the board president of Sundog Poetry Center, said he admires Farrell’s experimental style that incorporates “the lyricism, sharp imagery, metaphoric zest and linguistic playfulness of the best poetry.”

“And finally, I admire the heart-felt questions he asks (and sometimes answers) about love and loss, about how we see the world and how the world looks back at us,” Shepard wrote in an email.

In a statement announcing Farrell as the winner, Ruefle quoted a line from the third section, “’The world is hard to find once you start looking for it,’” and said Farrell’s book “activates such a search … in such a startling way that by the breath-taking final section the poet finds himself searching for his relationship to a fish hook. Which of all objects looks most like a question mark, so the search becomes not one for answers but for the questions themselves, that Rilkean stance. Questions carry with them the obligation to go on, to carry on in any direction they may take us, and for the sake of the art of poetry, Lucas Farrell does just that. His is a mind that never stops moving.”

Farrell agreed that unanswered questions are a driving factor in his work.

“I think that I’m prompted to write when I am looking for answers, or there is some experience that I’ve had that poses questions or kind of leaves uncertainty that I’m grappling with,” Farrell said. “So a lot of the poems are just, in general for me, working to understand better or represent, emotionally, my experience.”

He began writing poems in high school, and at the urging of one of his English teachers, continued writing at Middlebury College. He said he did not write many poems in college, writing mostly nonfiction, fiction and some screenwriting, until attending the Bread Loaf Writers’ Conference as a senior.

“That was very informative and inspiring for me,” he recalls. “I started writing a lot of poems.”

He attended graduate school at the University of Montana, where he earned his Master of Fine Arts in poetry.

Farrell and Conrad moved to Townshend in 2010, and now have two daughters: Maisie, 4, and Minna, 10 months. He noted that finding time to write can be difficult between farming and raising a family.

“But it’s always been there, just in hiding,” he said. “So it’s nice to get it out and feel motivated to continue writing and be a part of the Vermont writers community, which is so amazing and inspiring.”

Also selected by Ruefle were two runners-up: “This Topia” by Partridge Boswell and “Little Fish” by Lorrie Goldensohn. Among the other finalists are Brattleboro residents Michael Fleming and Arlene Distler.

“the blue-collar sun” will be available for order from the Sundog Poetry Center website, sundogpoetry.org, and independent bookstores around Vermont can order from Green Writers Press’ distributor, Independent Publishers Group in Chicago, or via Ingram.

Information on the 2021 Sundog Poetry Book Award is available at sundogpoetry.org/sundog-book-award.