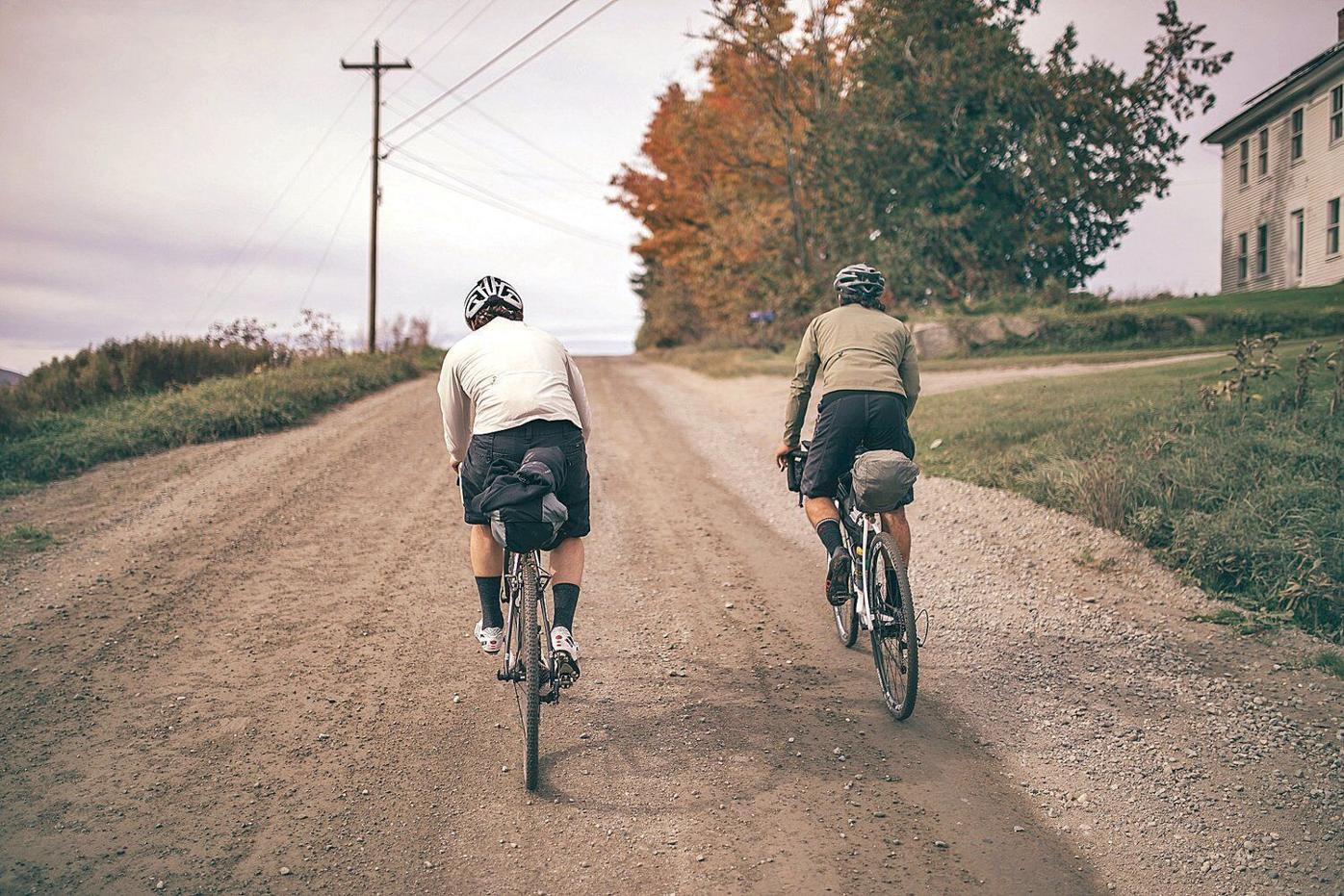 Pastoral scenery and mountain views await cyclists who venture onto the back roads of Vermont. 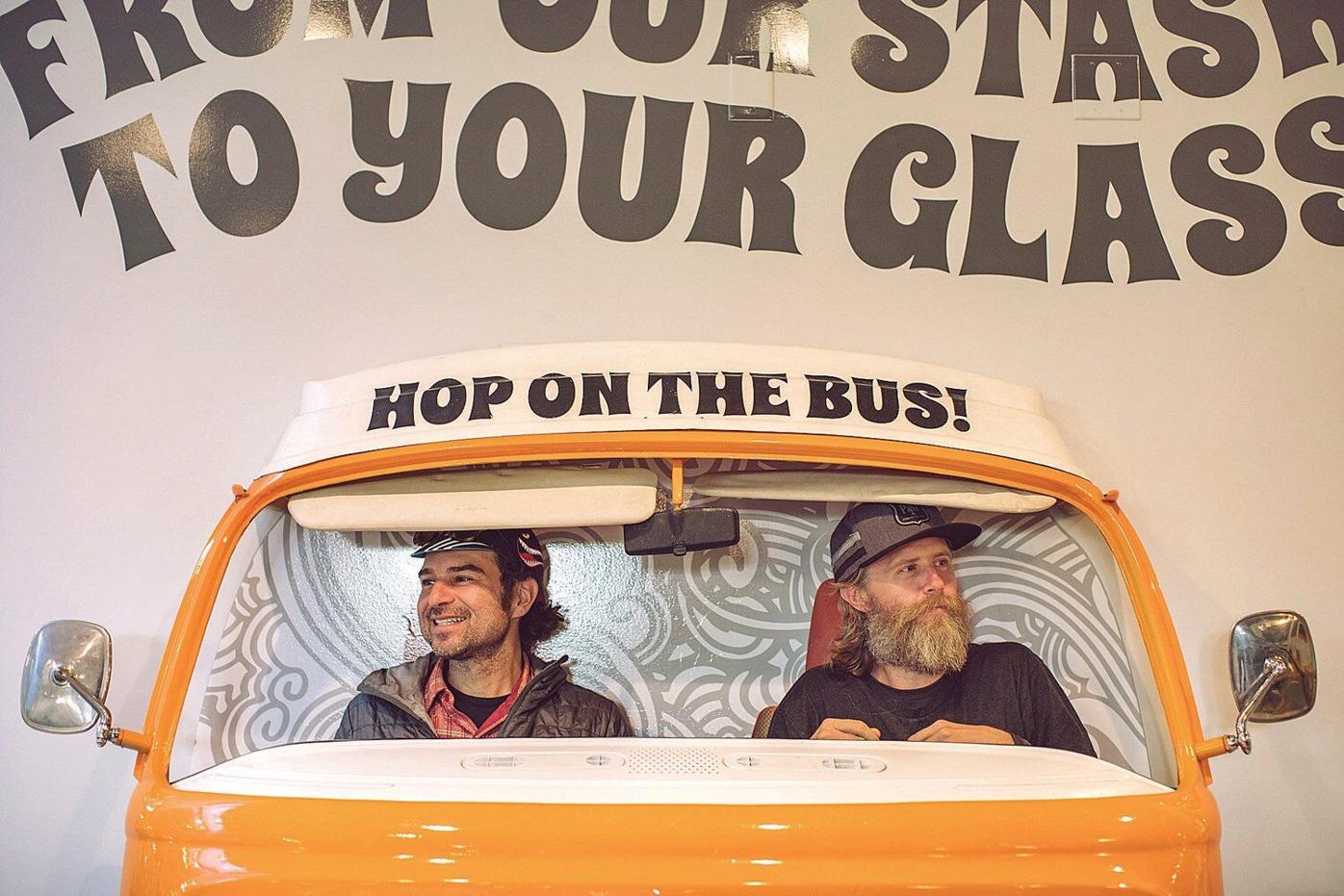 Joe Cruz and Logan Watts hop on the bus at Otter Creek Brewing in Middlebury. 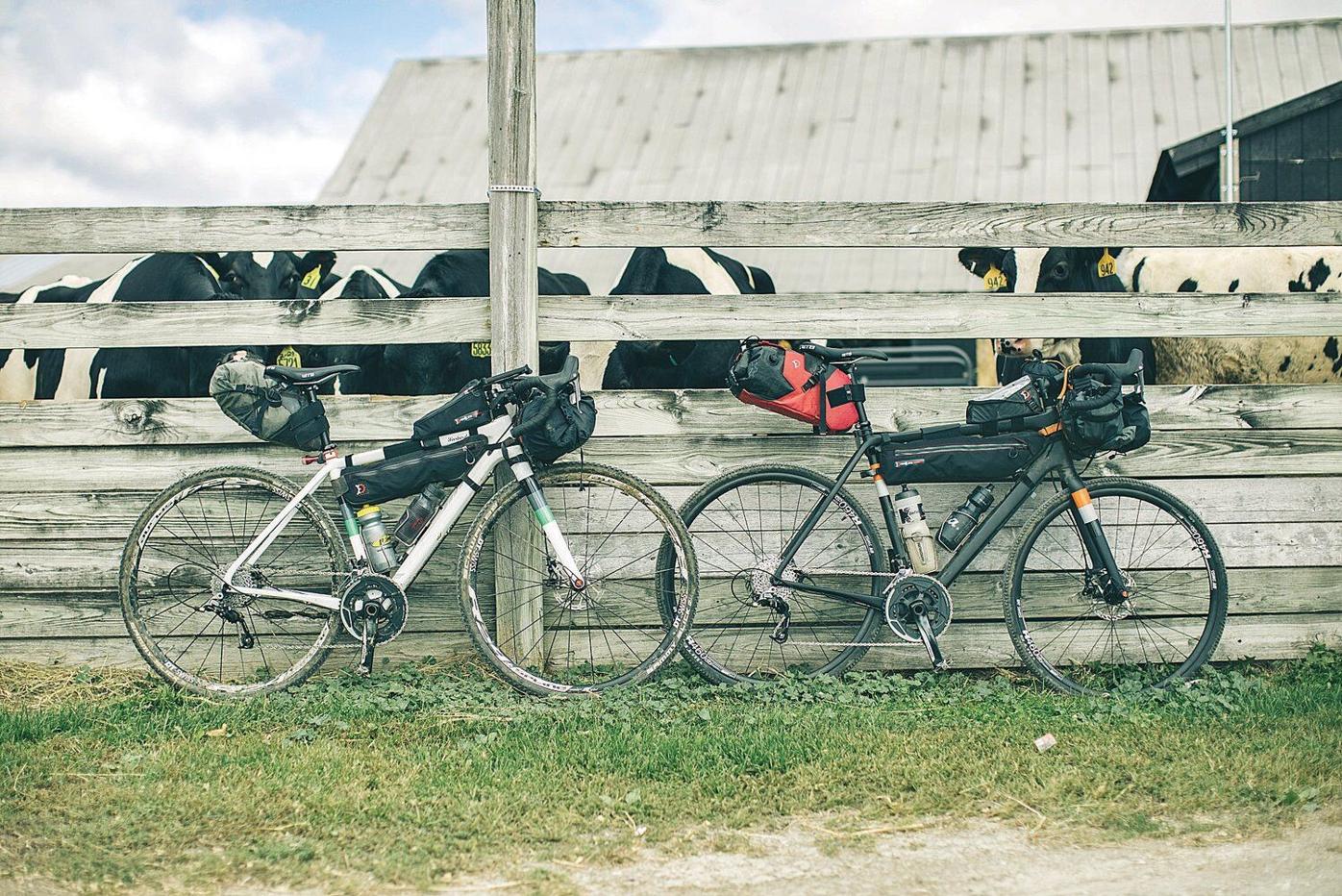 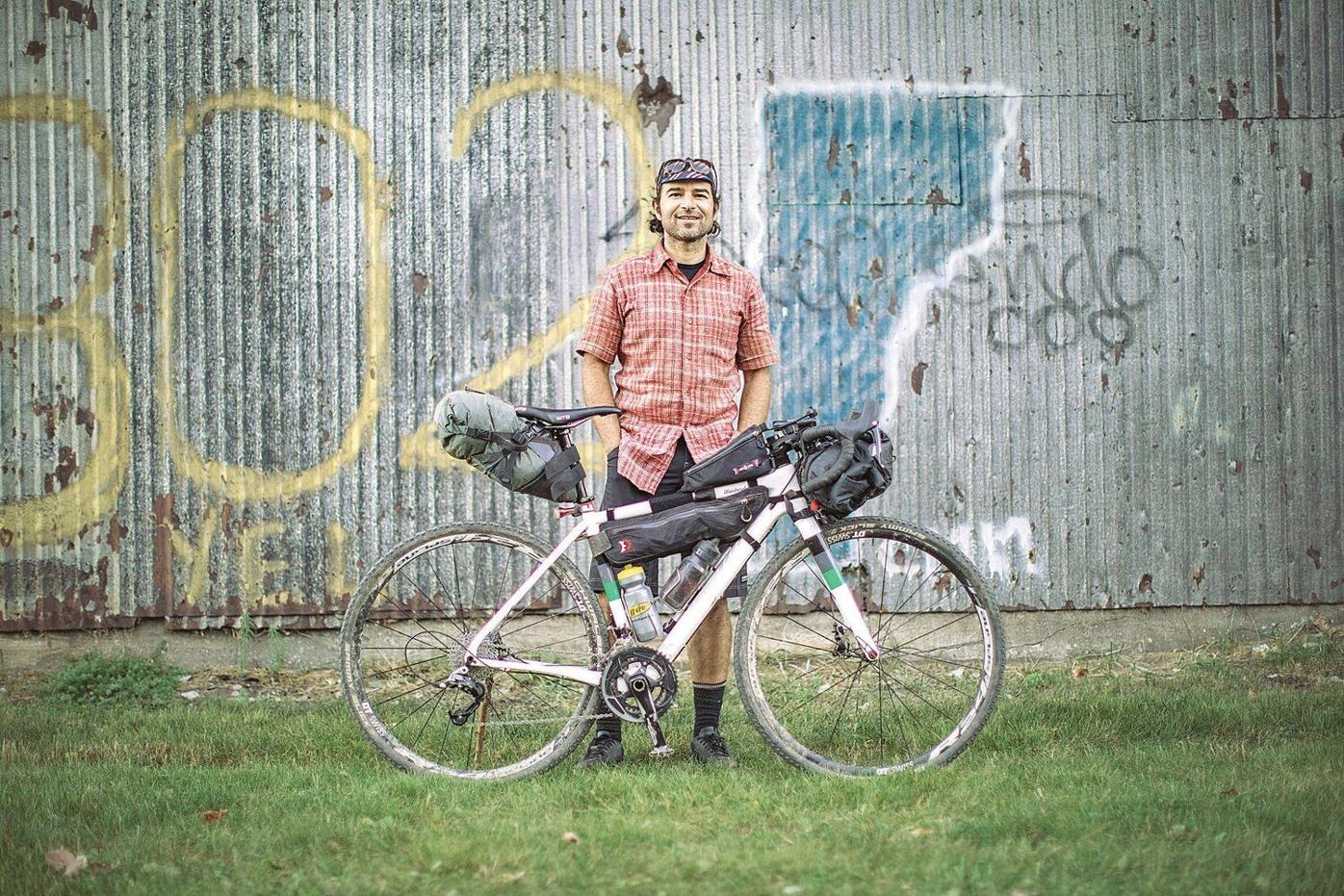 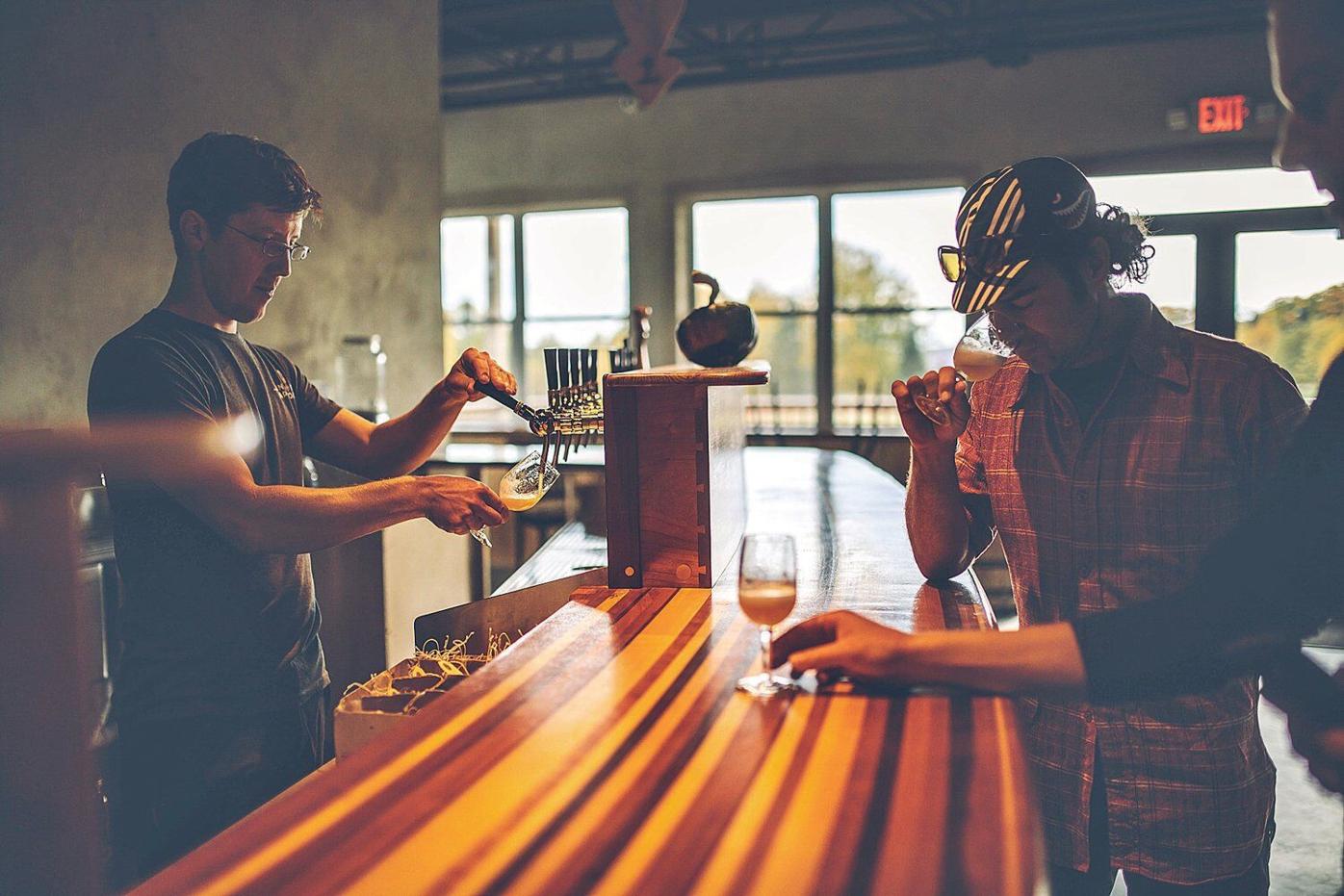 After 13 breweries, your memory can get hazy. Cruz took notes on his tastings.

Pastoral scenery and mountain views await cyclists who venture onto the back roads of Vermont.

Joe Cruz and Logan Watts hop on the bus at Otter Creek Brewing in Middlebury.

After 13 breweries, your memory can get hazy. Cruz took notes on his tastings.

I took my first bikepacking trip in 1988. My partner girlfriend at the time and I boarded an Amtrak train in Albany, N.Y., with our mountain bikes in boxes and our panniers packed with sweaters and spare t-shirts, flannels and cargo shorts. We had bedrolls, a water filter, pots, a Coleman stove and a tent — all borrowed from our college outing club. I had a copy of Ed Abbey's "Desert Solitaire." We were bound for Thompson Springs, Utah, 42 hours away. From there we pedaled down to the White Rim Trail.

I'd sent a check and a self-addressed envelope to the Rim Cyclery in Moab, and they sent me back a map of the route. It was my first trip to the American West, my longest ride by a wide margin, and a powerful introduction to the sense of possibility that comes from watching the world unfold from a bike.

Between then and now I've had the chance to bikepack across the globe, including the length of the Andes from Ecuador to Argentina, a circuitous tour of Alaska, across the Middle East, through Scandinavia and a year-plus solo trip in Asia. But the most popular bikepacking route I've ever posted on Bikepacking.com is here in Vermont.

Bikepacking is what happens when you load up a bicycle with spare clothing and sleeping gear and pedal with the same aesthetic and mindset as a backpacker. The goal is to be in nature for anything from an overnight to an open-ended around-the-world journey. It's pedaling with a sense of curiosity, openness, awareness.

Notwithstanding internet debates about the definition of bikepacking, there are no rules. Five or six years ago, the dominant vision was of riding remote singletrack on a mountain bike with suspension, probably wearing a backpack and not seeing or talking to anyone other than your adventure companions. That's a perfectly fine way to do it and planning for such an expedition brings its own substantial pleasure.

The images and aspirations that make up bikepacking nowadays still involve getting away from paved roads and often involve camping. But the present heart of bikepacking achieves a broader and, to my way of thinking, better expression of the sport. Sure, the availability of capable all-road and gravel bikes has had an influence here, but the shift is about more than putting fatter tires on road bikes.

I think there's a critical mass of thoughtful ways that we can engage with the geography and spirit of a place on a bicycle. Think a zigzag car camping trip mixed with a Long Trail walk combined with an old-school MTB jaunt. Any bike ride where you're carrying provisions to go further than you normally would, counts.

I live in southern Vermont and a few years ago Logan Watts, founder of Bikepacker.com, and I had the idea to create a multiday bikepacking loop that would combine great routes, vistas and camping with a chance to visit some of the best craft breweries in the state. We pictured riders slowing down and savoring their surroundings, perhaps covering 50 miles each day even though they could do more if they hurried. We hoped that those who followed the trail would make stops to picnic on a town green, or take a dip in a swimming hole, and, of course, raise a few sublime pints.

The result was our Green Mountain Gravel Growler, a route that starts in Burlington, heads to Stowe and then the Northeast Kingdom, comes down through Montpelier, southeast to Northfield and curves back west over the mountains to the Mad River Valley then over mighty Lincoln Gap. On the west side of the Greens, it's another couple of days through Middlebury and Hinesburg, then back to the start, totaling close to 250 miles. The best part? We routed it to stop at 13 breweries along the way, with options for even more.

We left in early October for our scout run of the Growler, with morning frost on our tents but weather that warmed enough for short-sleeve riding by midday. Leaving the Burlington waterfront, it didn't take long to get out past the bustle of Williston and Route 2, and turn onto Johnnie Brook Road, a mostly-dirt road that traces the south shore of the Winooski River.

We stopped in Richmond (home of Stone Corral Brewery) and then pedaled on to Waterbury to camp at Little River State Park for our first night, by the shores of the Waterbury Reservoir. From there, we could have opted for singletrack, riding the trails around Cottonbrook (closed now due to a recent landslide) or any of the trails in Waterbury's Perry Hill. Instead, we pushed on up Loomis Hill, across Sweet Farm Road and gravelly Waterworks Road and into Stowe, home to Von Trapp Brewing, along with The Alchemist and its famed Heady Topper, Idletyme Brewing and Stowe Cider.

The breweries on the route were expecting us, as we had contacted them in advance and explained our vision. We were met with enthusiasm, and in most cases we got a tour of the brewery and a chance to talk to the head brewers. We found again and again a confident pride in the Vermont beer scene, and a sense that the landscape and the community were integral to the brewers' ability to produce the coveted craft drafts. We stopped when we could and sat and talked beer brewing — and coffee roasting with the amazing crew at Good Measure in Northfield. Usually we sampled a flight of the current favorites, but with a three-brewery average per day and 8 percent imperial IPAs on offer, we had to keep things moderate.

Where we could, we also sampled singletrack. In Stowe, we rode the tasty Lower Derby trail just off the von Trapp trails and then headed north on dirt roads and logging trails, before spilling out at Morrisville, home to Lost Nation and Rock Art Brewing. From there, it was more dirt roads and a nap in Craftsbury Common. We rolled along an obscure route to emerge at Hill Farmstead for a taste of its world-class brews before making our way south through the towns of Adamant and Calais.

Rolling in from North Branch Park into downtown Montpelier brought a return to cars and pedestrians and sound. We locked our bicycles outside of the Threepenny Taproom and shouldered our way to the bar. The next day we hooked up with MAMBA — the Montpelier Area Mountain Bike Association — for a group ride over Irish Hill, another highlight mountain bike section. After ascending Lincoln Gap late in the day we camped in the Green Mountain National Forest with snow flurries in the middle of the night.

Using breweries as waypoints made for an easy way to give shape to the route. I followed my usual process of sitting with the paper maps and the Delorme Vermont Atlas and Gazetteer, then moving to satellite imagery and multiple base maps. I wrote to riders from the towns that I thought we'd pass though.

There was some hilarity and a bit of pushing over the mountains from Northfield to Waitsfield. Locals saw the bicycles and ask us about our trip. When you're on a big ride for weeks at a time, sharing tales of the journey with a stranger can seem like an exercise in abstraction because the accumulated details are of far away locales.

But Vermonters would light up at the familiar places that we were stringing together and would nod enthusiastically when we'd show pictures of an amazing covered bridge or Holstein cows at a farm at the other end of the hollow.

Most of all, a bikepacking route has to feel like a story, with parts that encapsulate the whole journey. There are hard parts, but on a good trip, you achieve relief through a span of gentler loveliness, with no single emotion taking over for too long. A bikepacking trip of several days makes it so that the small frustrations or low points get absorbed into something that is bigger and more positive.

For our last night we had no camping plan and were well outside of the National Forest. We introduced ourselves to a farmer in Addison County, explained that we were two cyclists who love Vermont, and asked whether there might be a grassy spot on her land where we could camp. We promised to leave no trace of our having been there. She showed us to a flat grassy area, offered us a shower and even invited us to sit by the woodstove before turning in for sleep. That conversation stays with us and continues to speak to us about community and regard for a place. We sent her a thank you note when we got home.

Logan and I have done plenty of trips where we've biked well off the grid and far away. We have relished the sense of sharing and humanity that we've met around the world. We have been lifted by the enthusiasm that people so often have for home when they're asked about theirs with genuine respect and gratitude. We found much the same and I'm hoping others will, too, close to home.

It's an oversight that the unfurling valleys and hollows of southern Vermont don't get the same attention as the justly famous riding of the central and northern regions. This 4- to 5-day bikepacking loop celebrates the scenery and towns of that bottom quarter of our beautiful state. There are breweries, country inns, covered bridges, swimming holes, farmers' markets, and quiet lanes to dream of. It begins in Bennington and climbs over the Green Mountains on a local favorite road, Kelley Stand.

On the other side, the route turns south to catch lovely villages and eventually tacks eastward to Brattleboro. Beyond Brattleboro it heads north to Grafton, and west on an amazing seasonal forestry road to Dorset, where you should swim in the famous quarry. From Dorset it's back south to Bennington. This route is mostly on dirt and easily doable on a gravel or cyclocross bike, but a hardtail mountain bike is never wrong for bikepacking. Expect a lot of climbing—it's Vermont! That's a ready excuse to keep daily mileage low and to appreciate the scenery.

Primitive camping is free and legal in designated areas of the Green Mountain National Forest, with camping options indicated on the map. A fun mellow itinerary would be a five-day inn to inn trip with stays in Readsboro, Brattleboro, Grafton, and in Dorset. An ambitious effort would be three 70-mile days with camping along the way.

Joe Cruz is a Williams College philosophy professor who rides dirt roads to work from his home in Pownal. He has bikepacked and mapped routes from the Andes to Kyrgyzstan. This story previously appeared in the September 2019 issue of Vermont Sports Magazine and is republished with permission.