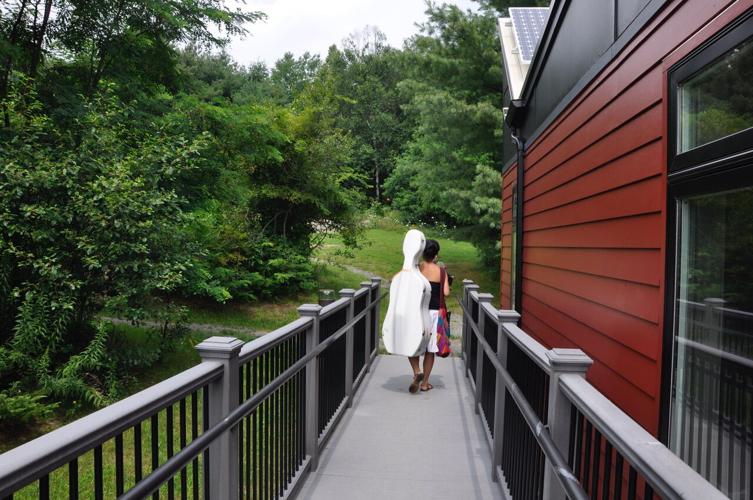 A cellist leaves a Yellow Barn artist studio on campus at the Greenwood School. 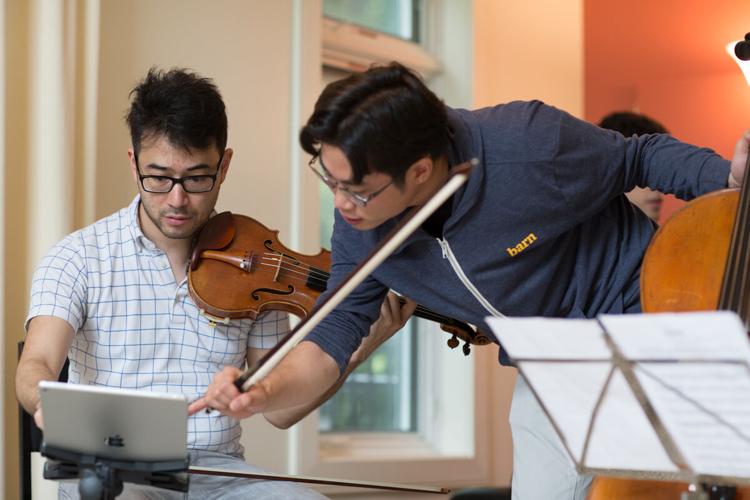 Suliman Tekalli and Yoshi Masuda work together in one of Yellow Barn’s artist studios on campus at the Greenwood School.

A cellist leaves a Yellow Barn artist studio on campus at the Greenwood School.

Suliman Tekalli and Yoshi Masuda work together in one of Yellow Barn’s artist studios on campus at the Greenwood School.

PUTNEY — Yellow Barn’s summer music festival will take place this year in person from July 9 to Aug. 7, but the planning is part of a never-ending process, said executive director Catherine Stephan in a recent interview.

“That’s the invisible side of Yellow Barn,” she said, “that people don’t know.”

In January and February, Seth Knopp, Yellow Barn’s artistic director, goes on the audition tour. He visits eight cities in the United States and three or four in Europe to hear live auditions. These auditions are designed to help the musicians be their “best self,” Stephan said, with the feeling of competition left at the door.

This commitment to non-competition has been part of Yellow Barn since the beginning, she said.

“Our founders, Janet and David Wells, believed the joy of music is in the work itself,” Stephan said. “Performance is just an extension of that work. David was a very humble man who was passionate about music. He said he started the summer program for his students because he wanted them to get better as musicians.”

Even so, over 500 musicians apply for 35 to 40 open positions. At the end of the audition period, invitations are extended.

Once Knopp knows who is coming, Stephan said, he begins planning the programming. This is an open and multi-layered process. He makes a list for each participant of everything they’ve played, and he looks for holes in their repertoire. He also asks them for wish lists of works they’d like to study. On these lists, there may be pieces or composers unknown to him that he then researches.

“Our musicians are not ‘hired,’ to give concerts at Yellow Barn,” Stephan said, “although some who are designated as faculty receive nominal honoraria. It’s more like a family reunion. The musicians know each other so well that over time they bring ideas to Seth.”

Over 90 pieces of music are performed every summer in 19 concerts. Each musician plays between five and seven pieces, staggered throughout the summer. The repertoire ranges from 17th or 18th century to world premieres.

“Seth finds inspiration in composers and pieces that talk to each other,” Stephan said. “He considers how the different pieces interact. Then he programs the season on a big calendar, paying attention simultaneously to how a concert will be heard by someone who attends only one event, and how the season will be heard by someone who goes to every concert. It’s a matrix of the threads of experience both within one concert and throughout the season.”

“My understanding is that as a young musician he played frequently at the Vermont Jazz Center,” Stephan said. “He’s an incredible performer. He will be writing a new piece that explores Miles Davis’ “On the Corner” collaboration with Karlheinz Stockhausen. A mixed ensemble with varying degrees of experience with jazz will collaborate on the premiere performance. ”

Laplante’s work, titled “Wild Tapestry (For the Muse of Miles Davis)” will premiere on July 17.

According to information on the NewMusicUSA website, “Travis Laplante is a composer and saxophonist living in Brooklyn, New York, who is dedicated to remembering music’s original purpose and to bringing it back into modern consciousness. Laplante believes that music is magic that has the ability to transform life back to its true state. This requires the musician to have given his/her life to mastering the art of cultivating sound. Laplante is particularly interested in dissolving the separation between musical performers and listeners and transforming the physical space of the performance setting.”

Also planned is a performance of Jerod Impichchaachaaha’ Tate’s “Standing Bear: A Ponca Indian Cantata in Eight Tableaux.” Tate is a citizen of the Chickasaw Nation.

“Standing Bear was a chief of the Ponca, a tribe that was relocated by the federal government in 1877,” Stephan said. “Many of the tribe died during that time. including Standing Bear’s son. The son desired to be buried in his tribal homeland, so Standing Bear walked for two months, carrying his son’s bones, to bury them in the earth of ‘home.’ In the subsequent legal case, Standing Bear became the first Native American to be granted the most basic civil rights under American law, establishing, in essence, ‘I am a man, and I have a man’s rights.’”

Stephan added that Tate will be interacting long distance via Zoom with the Yellow Barn musicians and audiences. His piece will be performed by Yellow Barn baritone William Sharp on July 24.

There may even be a bit of programming in the old barn at the original Yellow Barn site, Stephan said. The organization acquired the building a little over a year ago.

As noted on the Yellow Barn website, several factors are making it possible to have the full complement of musicians on site rehearsing on the Greenwood School campus in Putney: putting in place a vaccination plan for every member of the Yellow Barn community; also, the Manchester (Vermont) Medical Center is helping to design and administer a testing program for the musicians throughout the summer.

“Yellow Barn is a philosophy,” Stephan said. “We believe that where you live affects your work. We want our musicians to have the feeling of being ‘in residence’ locally. They live on campus, and we rent apartments or guest houses in Putney. Just like us, they sleep here, shop at the Co-op, eat at the Gleanery, go to the bookstore. Our participants say they get as much done in a day here as would take a week at home. There is that kind of energy.”

This summer, audience members are invited to return to the Big Barn in person. Proof of COVID-19 vaccination will be required for entrance. Seth Knopp’s programs are now online, and tickets are on sale. Visit yellowbarn.org for more information and to purchase tickets, or call the Yellow Barn box office at 802-387-6637. As an added safety precaution, seating will be limited to 60 (50 percent capacity), and advance ticket purchases are strongly recommended.

Nancy A. Olson is a freelance writer

who lives in Putney.