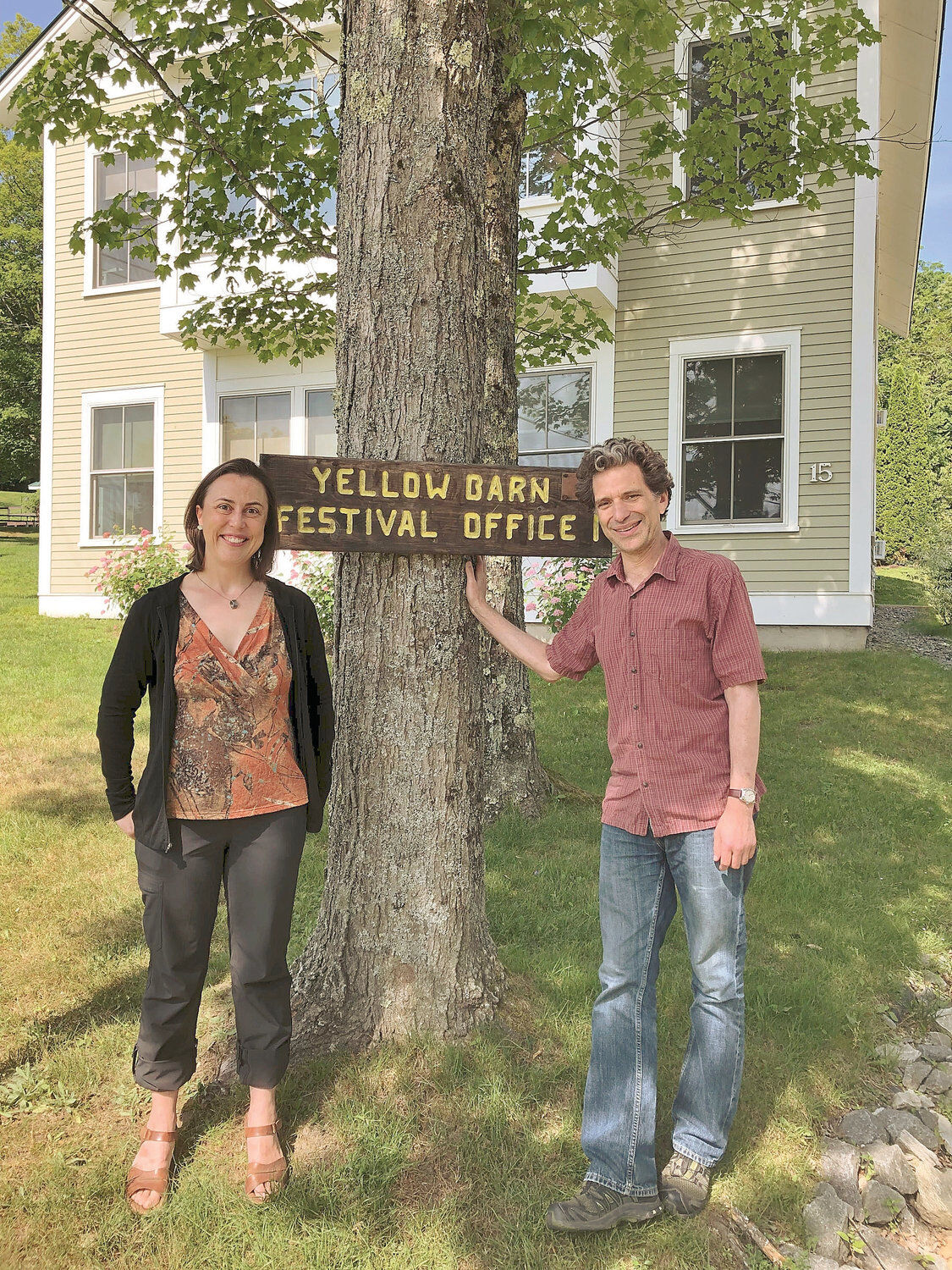 Yellow Barn's Catherine Stephan, executive director and Seth Knopp, artistic director stand in front of their office at the Greenwood School in Putney. 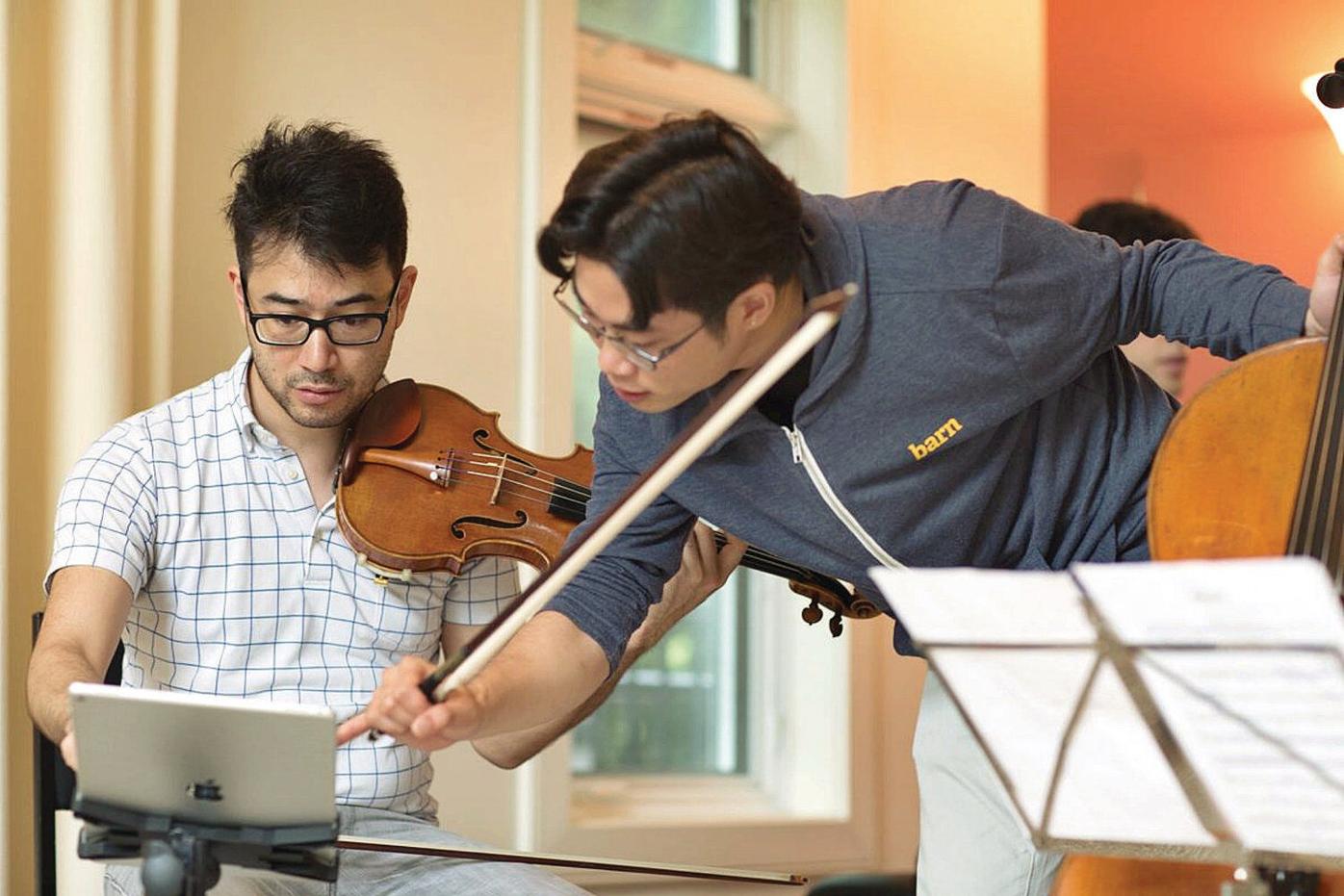 Violinist Suliman Tekalli, left, and cellist Yoshika Masuda rehearsing in one of Yellow Barn's environmentally-friendly artist studios on campus at the Greenwood School. 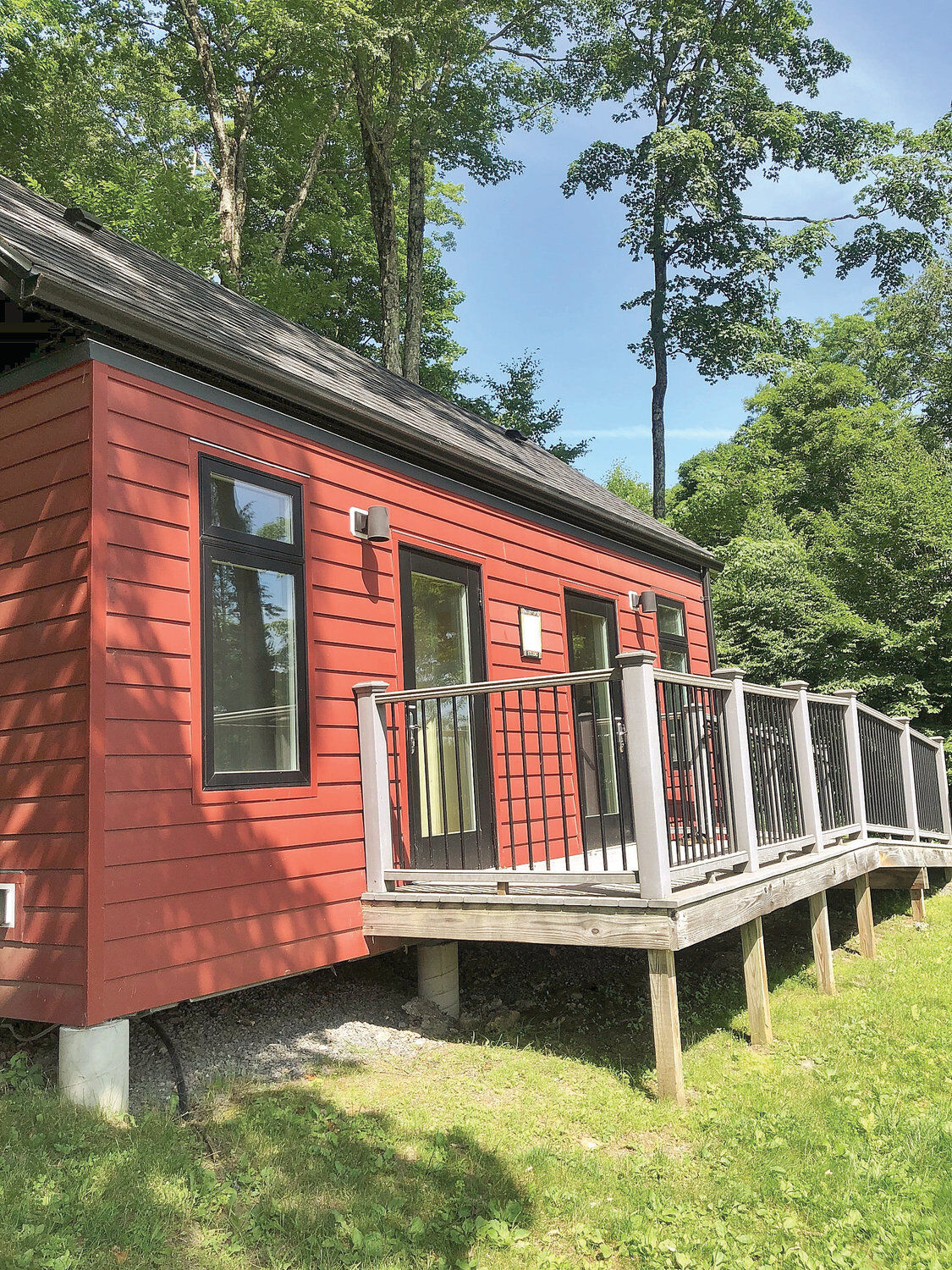 One of the Yellow Barn rehearsal and practice studios in Putney at the Greenwood School.

Yellow Barn's Catherine Stephan, executive director and Seth Knopp, artistic director stand in front of their office at the Greenwood School in Putney.

Violinist Suliman Tekalli, left, and cellist Yoshika Masuda rehearsing in one of Yellow Barn's environmentally-friendly artist studios on campus at the Greenwood School.

One of the Yellow Barn rehearsal and practice studios in Putney at the Greenwood School.

PUTNEY — What happens when you take 40 musicians ages 22 to 84 from around the globe and bring them to the village of Putney for the summer to play chamber music? The Yellow Barn Music Festival, the first retreat program for professional performing musicians in the U.S. and a top notch chamber music festival attracting 500 applications for 40 spots.

On Saturday, Yellow Barn will turn 50 years old. Founders David and Janet Wells began the festival as "an informal summer retreat" for David's music students. It was called "Yellow Barn" for the color of the Wells' farm house in Putney village.

Seth Knopp, artistic director for the past 22 years says, "I'm proud of what David and Janet (Wells) started through their pure desire and love of music, simply to make music together during summer months."

Musicians from 12 countries rehearse from 9 a.m. to 9 p.m. six days per week, and will present a total of 19 concerts, performing 90 pieces of music of compositions spanning four centuries. It looks like a rigorous schedule but they relish the idea of being on the picturesque Greenwood campus (their home base) and living, studying and practicing with their peers and mentors. They refer to it as "a musical haven."

Twice awarded the ASCAP/Chamber Music American Award for Adventurous Programming, a critical part of Yellow Barn's philosophy comes alive in Knopp's programming. "We're playing new music building on the traditions of the past," explains Knopp. He programs every concert so that it is a complete experience from beginning to end — over the course of a season — both for the person who attends one concert to the person who attends every concert. Knopp adds, "Programming for Yellow Barn is a complex puzzle between seeing which musicians are here and what music fits with them."

He goes on to say, "Our job as musicians is to find ways of reaching people, to give them an experience that creates openness and purity of listening — not by making listening easy, but by making it possible for them to experience music on a fundamental level."

Two Yellow Barn faculty members that have returned each summer since 2001 are pianist Vivian Hornik Weilerstein and her husband Don Weilerstein, violinist, of Brookline, Mass.

"It's really an experience that one looks forward to all year: the combination of incredible musicians, incredible music, and a beautiful location. Yellow Barn is unique in so many ways. Once we get there, we are discovering all kinds of music that you've never heard before," says Vivian.

Don adds, " there's an incredibly special atmosphere at Yellow Barn. I particularly like the places that we have to rehearse, and the wonderfully beautiful campus with all the green hills of Vermont. All of this is just fantastic."

Current Yellow Barn participant Yoshika Masuda, a cellist from Kobe, Japan, says, "Yellow Barn is where inspiration is not only found, but created. The atmosphere and the environment really helps me to be in touch with my soul. Obviously, Yellow Barn is a place where your knowledge expands. But most importantly, I think, the experience at Yellow Barn reaffirms the necessity of music in my life. And Yellow Barn is also where lifelong friendships are formed."

Catherine Stephan, Yellow Barn's executive director since 2010, was a cellist at Yellow Barn for three summers and studied with Yellow Barn founder David Wells. She says, "David was an inspiration. He really believed in everyone's potential, and he had a way of bringing out the best in people. He loved music so much and just wanted everybody to experience it to its fullest."

She explains that when Seth Knopp joined the festival, he had long conversations with David about what he hoped Yellow Barn would give to musicians, and to music. To this day, Knopp remains committed to David's vision. "There is a story that once when David was on campus with Knopp, he looked around and saw all that was happening and said with genuine incredulity, 'Look what we did!'"

Stephan adds, "In order for the musicians to do the work that they have come here to do, we create an environment where it is truly possible for them to leave everything at door, all of the pressures of being a professional musician. That includes relieving them of additional financial burden. As a result we depend on a fully-funded program — $10,000 per musician — which we raise from the ground up each year."

"We moved to Greenwood in 2008. Since then we have fostered a uniquely collaborative relationship," says Stephan. Yellow Barn occupies their campus in the summer and Greenwood utilizes some of YB's studios during the school year. YB built eight sound proof studios that are sprinkled throughout Greenwood's campus.

On an educational level, YB conducts workshops with the Greenwood School's student body (grades 6-12) during its Artist Residencies. Stephan points out, "The way in which Greenwood fosters connection and communication is very much aligned with our mission, and this allows us to find points of intersection in various parts of their curriculum."

She adds, "YB has this incredible renown in the music community and is internationally known. So many faculty think of this as their musical home. The local community celebrates this festival with us. It's our institutional focus to protect that sense of place."

In 2002, recognizing that YB needed a larger space than the original barn, Putney resident and Yellow Barn supporter John Michael McKenzie designed and built an acoustically superb new concert venue he called "The Big Barn," which he leases to YB each summer.

Audiences now enjoy Yellow Barn concerts in an air-conditioned space with seating for 125 people, plus, in keeping with tradition, a loft for the 50 or so musicians at Yellow Barn, who attend every single concert together. The facility also includes ample room for the larger instruments that Yellow Barn requires — multiple concert grand pianos, a harpsichord and a plethora of percussion.

Recently, at a Yellow Barn concert, the Reformer spoke with audience member Kathleen Graves who lives in Brattleboro and attends about four Yellow Barn concerts each summer. Graves says, "I love the enthusiasm of the musicians for each other, and there's a sense of equality and appreciation between the younger musicians and their mentors."

Fifty years ago on that first night, the first Yellow Barn musicians watched the first moon landing together. On Saturday, there is a pre-concert discussion by Harvard University Professor Avi Loeb followed by a performance "inspired by human interactions with the moon ranging from the 17th to 20th centuries."

Loeb's pre-concert discussion is about the significance of the moon landing, cosmic modesty, and the search for interstellar life on the moon. The event takes place at the Putney Public Library Saturday at 7 p.m. and includes a Q & A session moderated by Yellow Barn Artistic Director Seth Knopp. A concert follows in the Big Barn, beginning at 8 p.m.

Victoria Chertok is a freelance writer and frequent contributor to the Reformer.