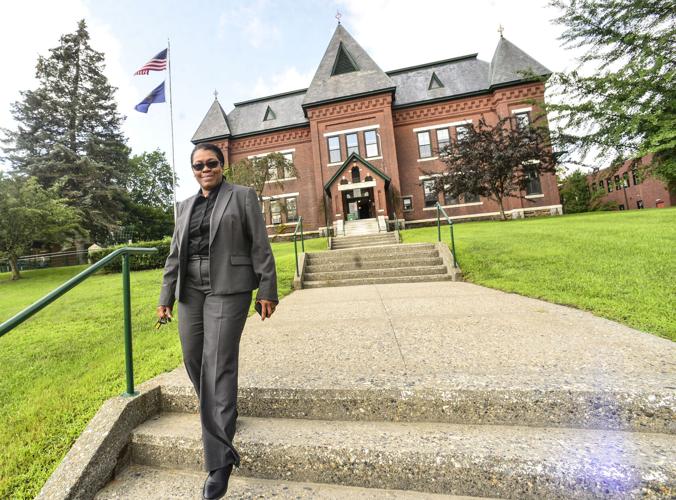 Norma Hardy, the new Brattleboro Police Chief, walks around the town to get familiar with her surroundings on her first day on the job on July 28. Hardy is Vermont’s first black female police chief. 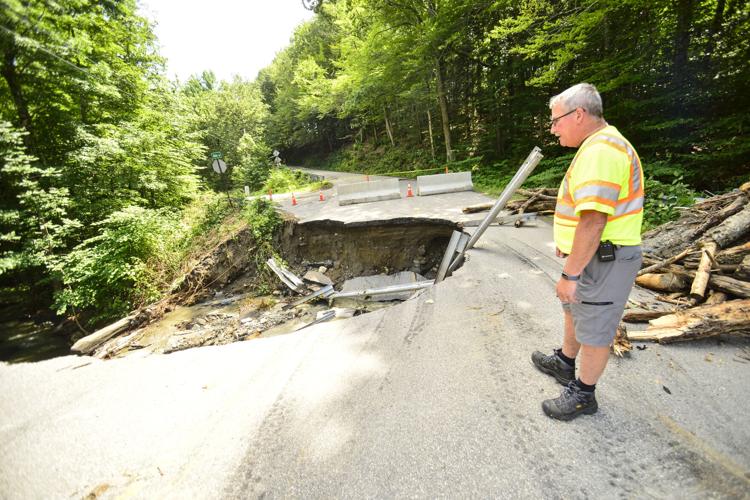 Steve Barrett, public works director in Brattleboro, talks about the damage to Hinesburg Road after the July storm.

Norma Hardy, the new Brattleboro Police Chief, walks around the town to get familiar with her surroundings on her first day on the job on July 28. Hardy is Vermont’s first black female police chief.

Steve Barrett, public works director in Brattleboro, talks about the damage to Hinesburg Road after the July storm.

BRATTLEBORO — The Brattleboro Select Board began its regular Tuesday meeting by expressing support for its newest employee, Police Chief Norma Hardy, and thanking one of its longest-term employees, Department of Public Works Director Steve Barrett, on his retirement announcement.

Select Board Chairwoman Liz McLoughlin began by noting that there are many people in the community who have committed to taking action to support the most vulnerable members of the town.

“All this good work is playing against the background of our shared goals for anti-racism and equity in the community,” she said. “It makes it particularly disheartening when we recognize that there are racists at play within the town of Brattleboro and the actions toward our police chief this past week were deplorable and sad.”

On Monday morning, the Brattleboro Police Department posted on its Facebook page that it had received racially biased memes and comments aimed at Hardy, who took over the department in late July.

“There is also no place for hate on this page, including instant messages,” states the message. “This behavior should stop immediately.”

In response, the Facebook page was flooded with messages of support for Hardy, the first black female police chief in Vermont.

“I was happy to hear of the many, many voices in support that hopefully drowned out all that online hate,” said McLoughlin.

However, she noted, “It just shows us that we have work to do in this town. We need to be vigilant to combat racism in Brattleboro and continue with the work that we have pledged that we would do.”

According to information received from the Brattleboro Police Department, the racist messages were sent by a single individual, who the department declined to identify.

Hardy came to Brattleboro after spending 26 years with the Police Department of the Port Authority of New York and New Jersey. Hardy served as the chief of that department, the first black woman to do so.

Town Manager Peter Elwell also addressed the offensive memes and messages that were directed at the new police chief.

First though, he said he was proud of the department’s “measured response” of placing a general statement on its Facebook page, affirming its commitment of keeping its page free of hate speech, “rather than specifically calling out the individual person or act.”

“Given the differential in the power of the BPD as an institution versus this individual who was acting in a way that is offensive to the work that we are doing in the community, it was important that the police department response to that showed restraint,” said Elwell. “I appreciated that that’s how they dealt with a difficult situation.”

He also expressed gratitude to the dozens of people who rallied around the town’s new police chief by posting supportive comments.

“A cross-section of the community demonstrating together that we aren’t going to tolerate hateful speech and actions in Brattleboro,” said Elwell.

Nonetheless, he was saddened by the reminder that “we do have overt racism and other forms of hate present here in Brattleboro.”

“This incident underscores the necessity of our maintaining our long-term, ongoing commitment to intentional anti-racist work,” he continued. “Both to address systemic racism institutionally as well as to confront person-to-person racism when we witness it.”

Board member Tim Wessel said in these instances “I’m always reluctant to give more power to a very small, few people who have these ugly beliefs.”

But he also said it’s important to acknowledge the town is committed to moving past such displays of hate and making Brattleboro more welcoming to people who have lived here a long time or to those who are coming in from a foreign country. Wessel was referencing the news that Vermont was soon to become home to 100 Afghan refugees and that a refugee support office will be opening in Brattleboro soon.

Ian Goodnow, vice-chairman of the Select Board, said the behavior displayed toward Hardy was unacceptable, though it is “one of the many reminders I see living in Vermont that there is so much more work to be done.”

Board member Daniel Quipp read from a memo from the town’s last community safety meeting, a process that was started to examine how town resources are currently utilized and how they could be best utilized to ensure equitable community health, wellness, and safety.

“I know, for sure, that Chief Hardy is not surprised by this,” he said. “We get to walk through our days being able to comment on something like this rather than actually fully experiencing it.”

Quipp said he at first was not going to comment on it but “silence on this would not be the right thing either.”

“Chief Hardy has dedicated her life to public service and is an exceptionally qualified and experienced person to lead our police department,” said Quipp. “I am really glad that’s she here ... she has really broad shoulders and will manage this and we will stand with her ...”

Elwell also announced the retirement of Steve Barrett, the director of Brattleboro’s Department of Public Works.

“Steve has been a part of the town team since 1974,” he said, including 33 years as a call-firefighter with the town’s fire department, and starting as water pollution operator in 1980, working his way up to become the director of the DPW in 1996, with responsibility for “the largest and most complex variety of services that we deliver to the community.”

Barrett was involved in two wastewater plant upgrades, said Elwell, the construction of the town’s first water treatment plant, the planning and approval for the replacement of that water treatment plant, the construction of water storage tanks, the rerouting of traffic for the installation of the Park Place/Linden Street/Putney Road roundabout and the rerouting of traffic on Fairground Road as part of the high school renovation project.

But perhaps most importantly, said Elwell, was Barrett’s leadership in responding to “numerous emergencies and countless winter storms.”

“In particular, Steve’s actions on the day of Tropical Storm Irene and throughout the days and weeks that followed enabled Brattleboro to recover more quickly and fully than many other communities,” added Elwell. “That was arguably Steve’s finest hour, as he put on full display his rare combination of technical knowledge, courage and communication skills.”

Elwell also announced that Dan Tyler, the town’s highways and utilities superintendent and assistant director of the Department of Public Works, would be succeeding Barrett as DPW’s director.

Wessel said he was only 7 when Barrett started with the town’s fire department in 1974.

“I wish him the best,” he said, noting he lives across the street from Barrett and they chat often. “He’s leaving quite a legacy behind.”

Goodnow also thanked Barrett for his service, noting “water and sewer is one of the things I really like to talk about.”

“[Steve’s] always been just so knowledgeable and kind and walking me through it as a layperson and also sharing a little bit of his passion for it with me,” he added. “I’ve been very grateful for that energy.”

Quipp and McLoughlin also thanked and congratulated Barrett on his retirement and Tyler on his promotion.

BRATTLEBORO — Dan Tyler likes to look at everything with an open mind.