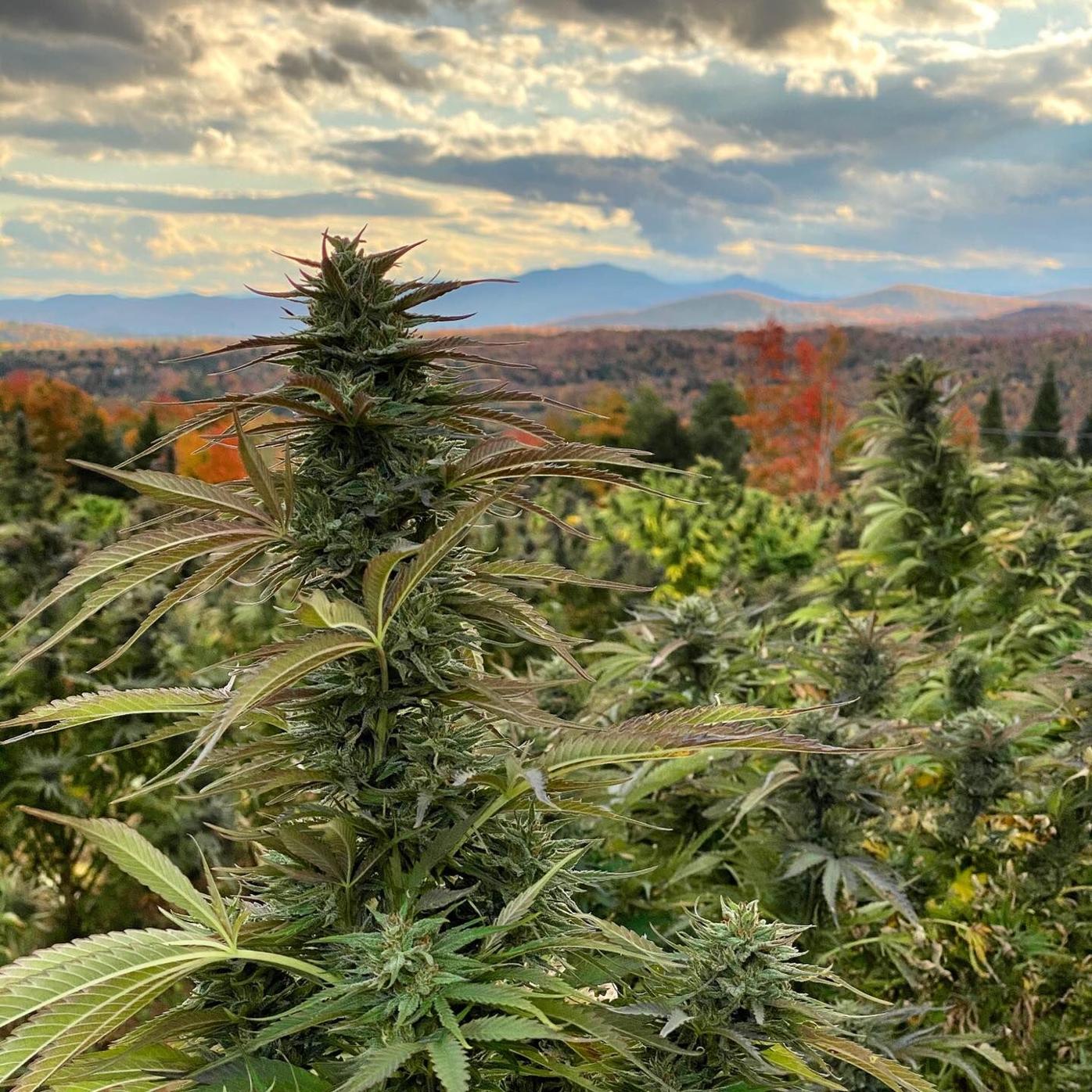 Vermont Hempicurean in Brattleboro works with Vermont growers of hemp — like Lily Hill CBD in Eden, above — to bring top quality hemp and CBD products to the Southern Vermont and online consumers. Owner Scott Sparks is also looking forward to opening an adult-use cannabis business in town in 2022. 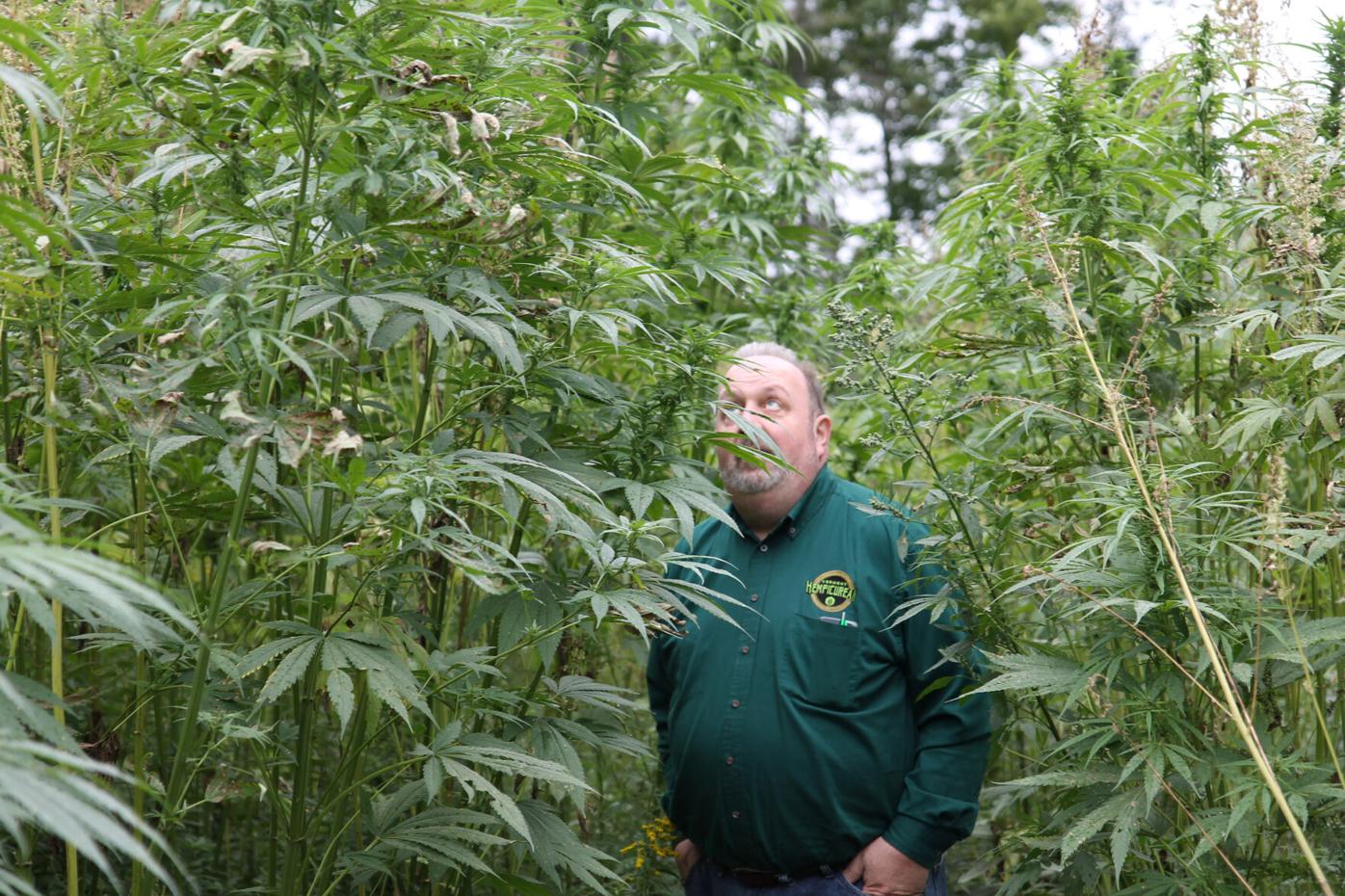 Scott Sparks stands among giant hemp plants, which are bound for Vermont Hempicurean once processed. 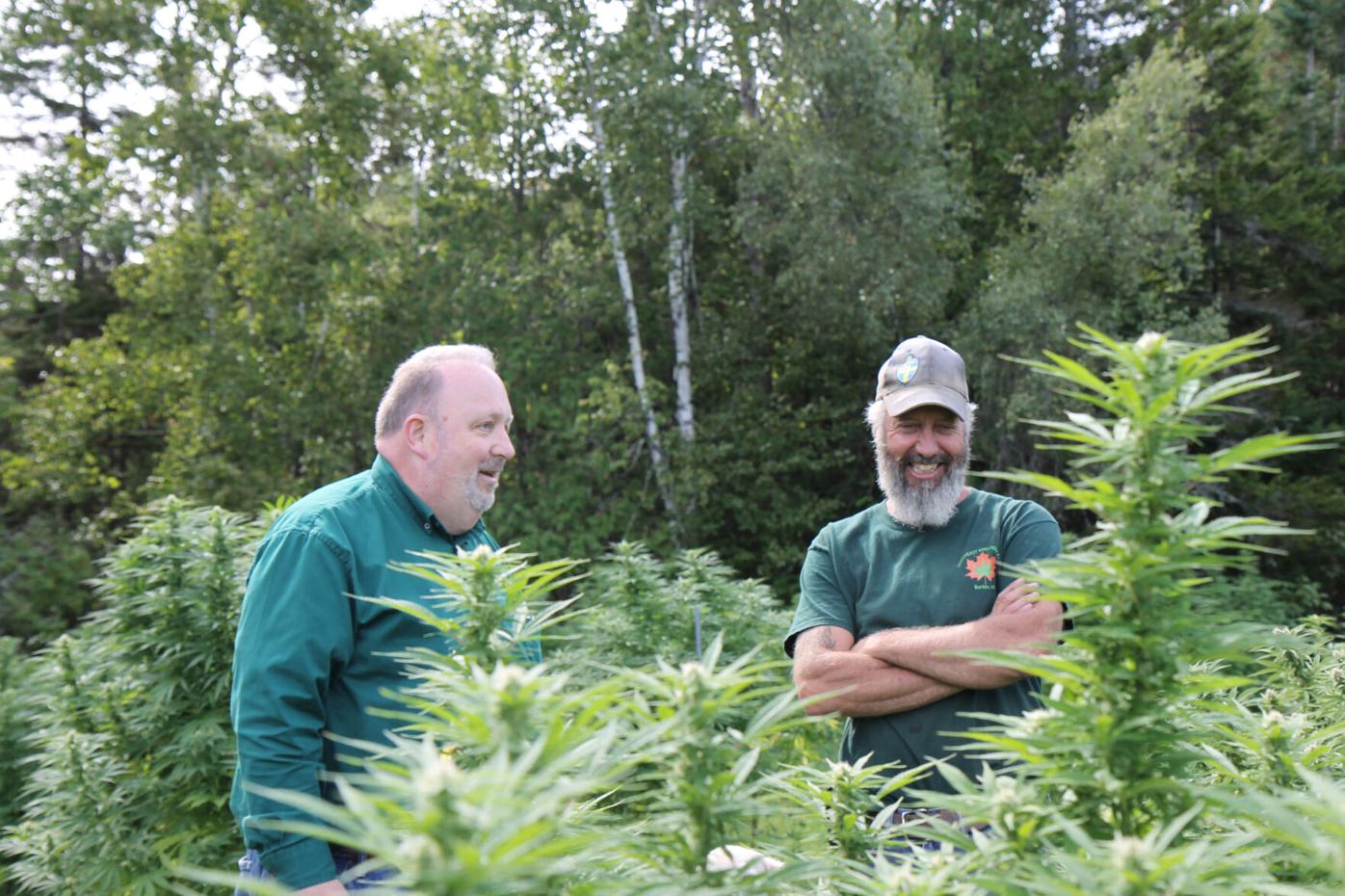 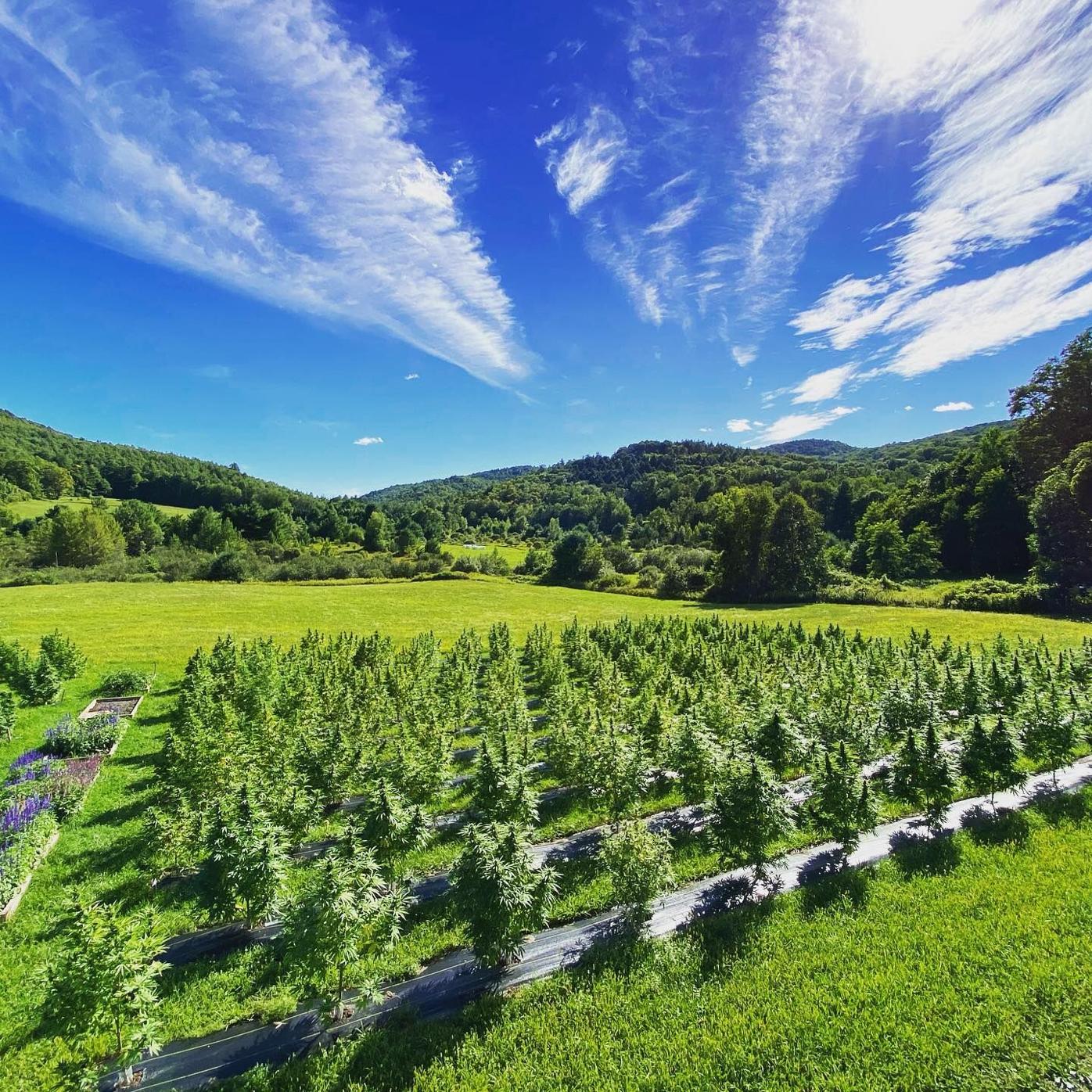 A wide view of some hemp plants at Bravo Botanicals in Guilford, one of the many Vermont farms that is supported by Vermont Hempicurean.

BRATTLEBORO — That his name is Scott Sparks gives you much of what you need to know about him.

Sparks is a man whose creativity brought forth the Vermont Hempicurean on Flat Street, his extension of the farm-to-table movement that he started after leaving his position as vice president of sales for Black River Produce. To augment the mainstay of his business, cannabidiol, or CBD, Sparks also sells horticulture supplies.

And for his latest creative venture, Sparks has been laying the groundwork to open a new site with several sister businesses that sell, grow, process and cook cannabis, which next year can be sold in stores in the Green Mountain state.

For now, Sparks is still very focused on his three-year-old CBD business, connecting more than 20 Vermont hemp farmers with fans of cannabidiol. Most of the farms are in the northern reaches of the state, although two hyperlocal farms — Bordertown Farm in Brattleboro and Bravo Botanicals in Guilford — are much closer.

‘Know where your hemp comes from’

“A lot of people like to know where their food comes from, and when you come to my store, you know where your hemp comes from,” says Sparks. A slideshow at the store will take you on a virtual site visit to all his partner farms.

“What I really try to do is connect the farmer to the consumer; so the consumer understands that when they buy this tincture or salve, they’re helping this farmer keep their farm and keep Vermont land open,” notes Sparks.

Even though CBD is ubiquitous these days, when Sparks was starting out, all he heard was negative.

“I was told ‘no’ everywhere I looked. When I went to do things that I thought would be no big deal, like credit cards, just getting insurance. ‘No, we won’t insure you.’ Payroll company. ‘No.’ Just finding a landlord,” recalls Sparks. “When I first opened this business, there were no models for me to go on. It sounds odd now, but there weren’t any CBD stores. I had to create my own model here.”

Hurdles were not insurmountable

Fortunately, Sparks credits his determined nature with how he cleared the cultural, municipal and political hurdles.

“I’m a stubborn guy. I persevere. I don’t take ‘no’ easily. I follow things through until I see it’s absolutely impossible to do what you want to do,” says Sparks.

Today, Hempicurean serves a broad clientele with CBD-based products and flower that is used for a number of ailments, from anxiety and stress to sleeplessness and pain relief.

When he first began the steps to open Hempicurean, CBD was still considered a Schedule 1 drug, like heroin or cocaine, although certain states allowed hemp to be grown under the hemp pilot program in 2014. That changed with the federal Agriculture Improvement Act of 2018, which cleared the way for farmers to grow it in the states.

Sparks doesn’t make any health claims but will share testimonial evidence from his customers and currently available data. However, he says people come in for two primary reasons: anxiety, stress and sleep problems, and also pain relief.

Ailments that he hears about run the gamut from veterans with PTSD and insomnia to systemic pain like fibromyalgia or arthritis.

“I have some clients who have tremors and other nervous system disorders. Some people get better results than others, but it’s worth trying,” says Sparks. “They might want to take something internally, like a capsule. Other times it’s a bad knee, shoulder, elbow, around with surgery, and they don’t want to take the opioids, and they’ll take CBD after surgery or they’ll use it long-term. They report back that they get relief from pain,” says Sparks.

Sparks says he is generally not an anxious person and doesn’t suffer from any serious pain issues.

“I occasionally get back pain from driving, and I’ll use it for that, but I’m not a regular user. I’m just not a stressed-out person. It’s not who I am,” says Sparks. “My motto, throughout life, is ‘what’s the worst thing that could happen?’ I kind of go with the flow and do what I can to correct problems.”

Years of high pressure work in restaurants where “everything is a crisis” makes the ups and downs of owning a small business easier to bear, he says, “and you learn.”

His primary crowd stops by for CBD, which includes people buying tincture, capsules and gummies. He says they tend to be ages 35 to 70 and are primarily female. The purchasers of flower skew younger, he says.

A younger crowd, ages 21 to 50, visits mostly for grow supplies.

“They tend to skew male and often are just coming out of the shadows of underground growing. There are some women that are growers, but it’s mostly male,” says Sparks; to this reporter, that sounds like a challenge, ladies.

Even though it’s an identical-looking plant to cannabis, and grows and is processed similarly, it’s vastly different.

Brattleboro voters to get cannabis vote in March

And, he notes, a plant that’s high in CBD will almost always have low THC, just as a high THC plant will contain low CBD.

By law, hemp plants must contain less than .3 percent THC when harvested, says Sparks. There’s an effort afoot to try to raise the limit up to 1 percent, he says, but it hasn’t happened yet.

Even though they’re different plants, customers still come looking for cannabis at his shop. Sparks says he has to direct them to Massachusetts as they search for CBD’s wild sister, because some folks automatically expect him to sell that, too.

“I still have to turn people away looking for cannabis, every day, all the time,” says Sparks.

Sparks appreciates the interest in cannabis and has invested considerable time, energy and money into identifying a suitable location in town; he says a lease is imminent.

Towns in Vermont must opt-in to allow cannabis sales, notes Sparks, and he adds that it’s more difficult to pass a positive vote for cannabis than a negative one. Despite that, the measure passed at Town Meeting this year.

Small businesses face the most challenges from COVID-19

“Six weeks of full-page ads, radio, advertising to get the word out. I think it worked. I won’t take full responsibility, but the vote was 3 to 1, and we won,” says Sparks.

Even with some significant opposition, Sparks says he felt he was able to make his case to town planners and the Select Board.

“I just wanted to let them know: ‘I’m here. I feel I run a respectable business and am an asset in town. I think I’ve made a positive move being down here and been a contributing member of the business community,’” recalls Sparks of his message to the boards.

The soonest he could legally open isn’t until October 2022.

“It gives me time. I’ve already picked out a location. I plan on having multiple businesses there: I’ll have a cannabis store; Vermont Hempicurian, the CBD store, and the grow business, and edibles kitchen, and a grow building, a 1,000-foot canopy grow facility,” says Sparks of his vision.

He can already envision his house brand, and intends to buy boutique and craft cannabis from others.

“Just like what I do now, buying from small farmers. I don’t want to sell the Coke or Pepsi of cannabis. I’d rather be known as the quality Vermont guy where you go for the real select product,” says Sparks of his near future.

To accomplish his next feat, Sparks will be moving from his downtown location, all part of his plan to make the entry of cannabis into Brattleboro as smooth as possible.

“I’ve tried to remove all the barriers that I knew of up front, at least the obvious ones: not near any schools, churches, no traffic problems, plenty of parking. And the neighbors are industrial. I don’t foresee any big issues, and if they do come up, I feel I can handle them,” says Sparks.

Just as with his earthly hurdles with opening a CBD store, opening a cannabis shop has them in oodles, too. Property, for instance, can’t be mortgaged, only owned. That stopped one of his first picks in its tracks.

“By the time I connected with the right investors, I found out someone else bought the building,” says Sparks.

But, some connections and a few Zoom meetings later, and Sparks says he’s come to an agreement with a landlord.

“I can’t say it publicly yet, as we haven’t signed the lease yet, but all the pieces are in place,” says Sparks.

Opening such a business will bring a number of jobs to the area, above and beyond his current full-time employee.

Meantime, Sparks says he’ll continue to be offering a wide array of hemp and CBD products, including two brands of hemp seed so folks can grow their own, as well as pet products to assuage the ailments of our feline and canine friends.

“We have quite a few dog customers and cats, too. Some of the dogs have stress and anxiety issues, from simple things like fireworks, or riding in the car, or going to the vet. Others have itchy skin. Also, as dogs get older, their hips and joints go. They use it for the same reasons people do,” says Sparks.

Just make sure to get your CBD from a reputable source, Sparks notes.

“You can buy CBD in a gas station, although friends don’t let friends buy CBD from gas stations. I doubt any gas station could ever provide you with a certificate of analysis. And it’s doubtful the staff at a gas station has much knowledge on the use of CBD,” says Sparks.

Hemicurean staff, meanwhile, can direct you to the right hemp-based product, whether it’s a salve, gummy, capsule, edible, hemp flower or a beverage.