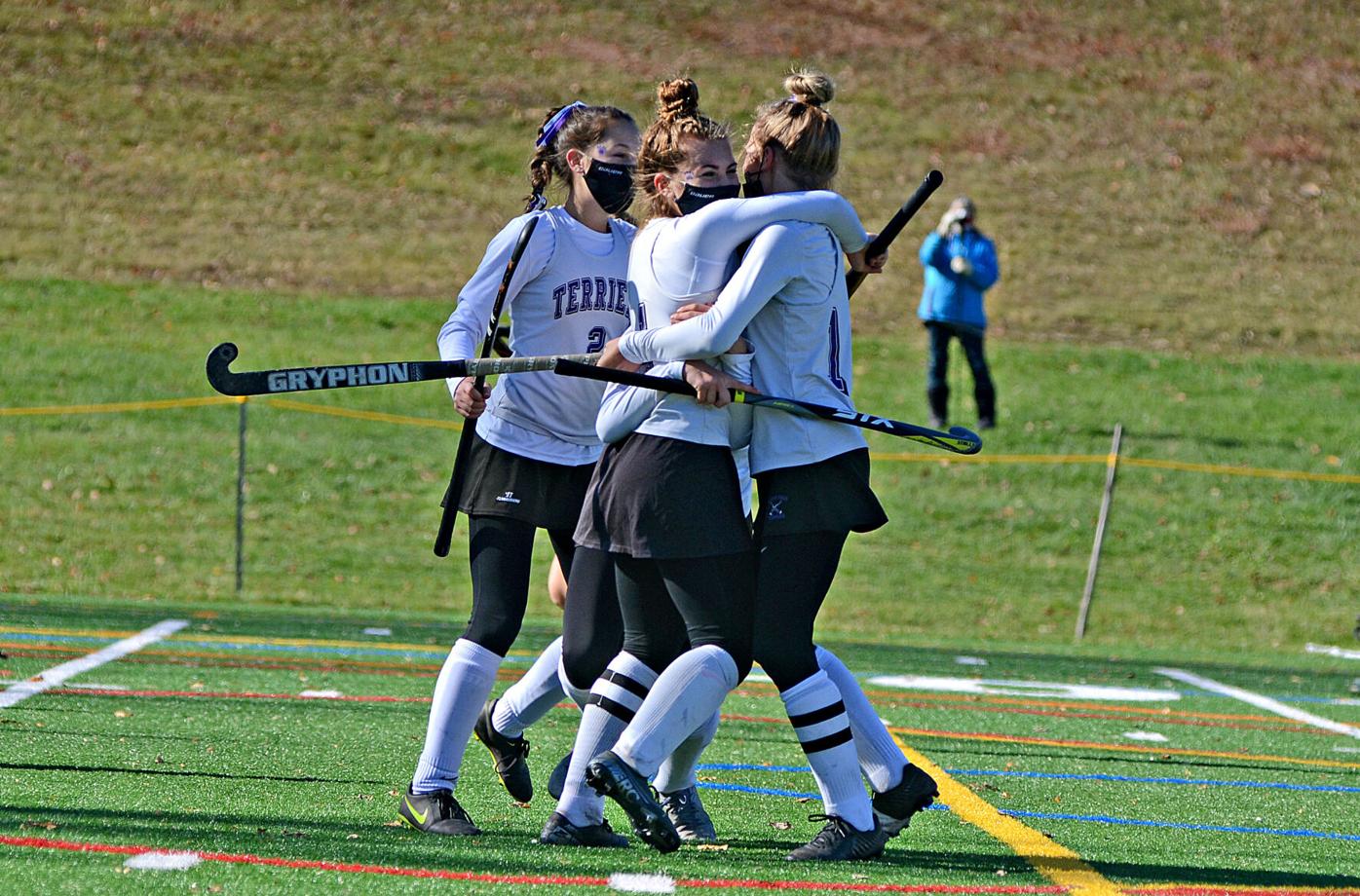 Bellows Falls’ Grace Bazin, center, and Maya Waryas celebrate a goal by Bazin during the Division 1 state championship field hockey game in Manchester. Goalie Jaia Caron made five quality saves in the last 15 minutes as the Terriers topped CVU 2-0 to cap off a perfect season. 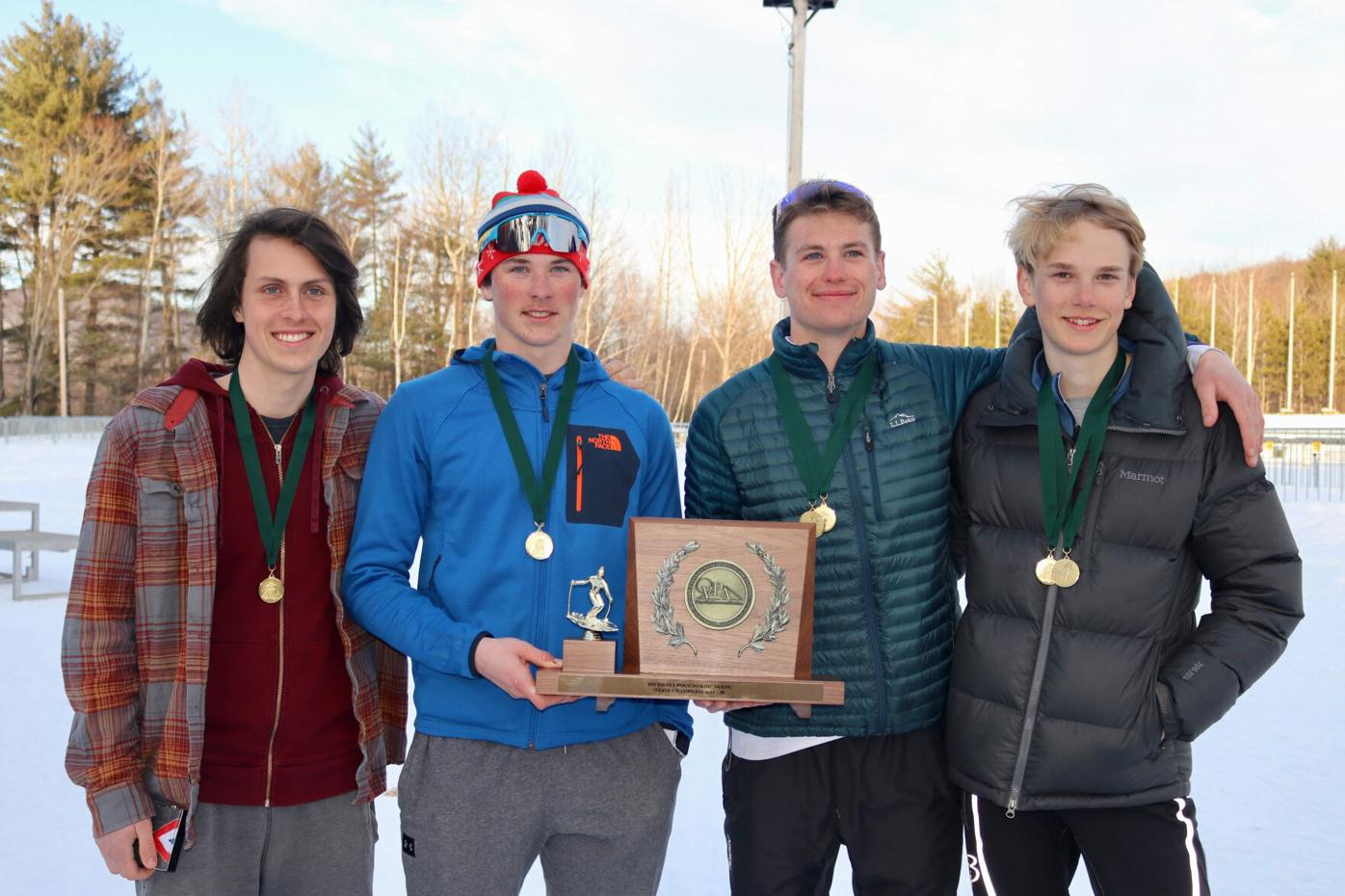 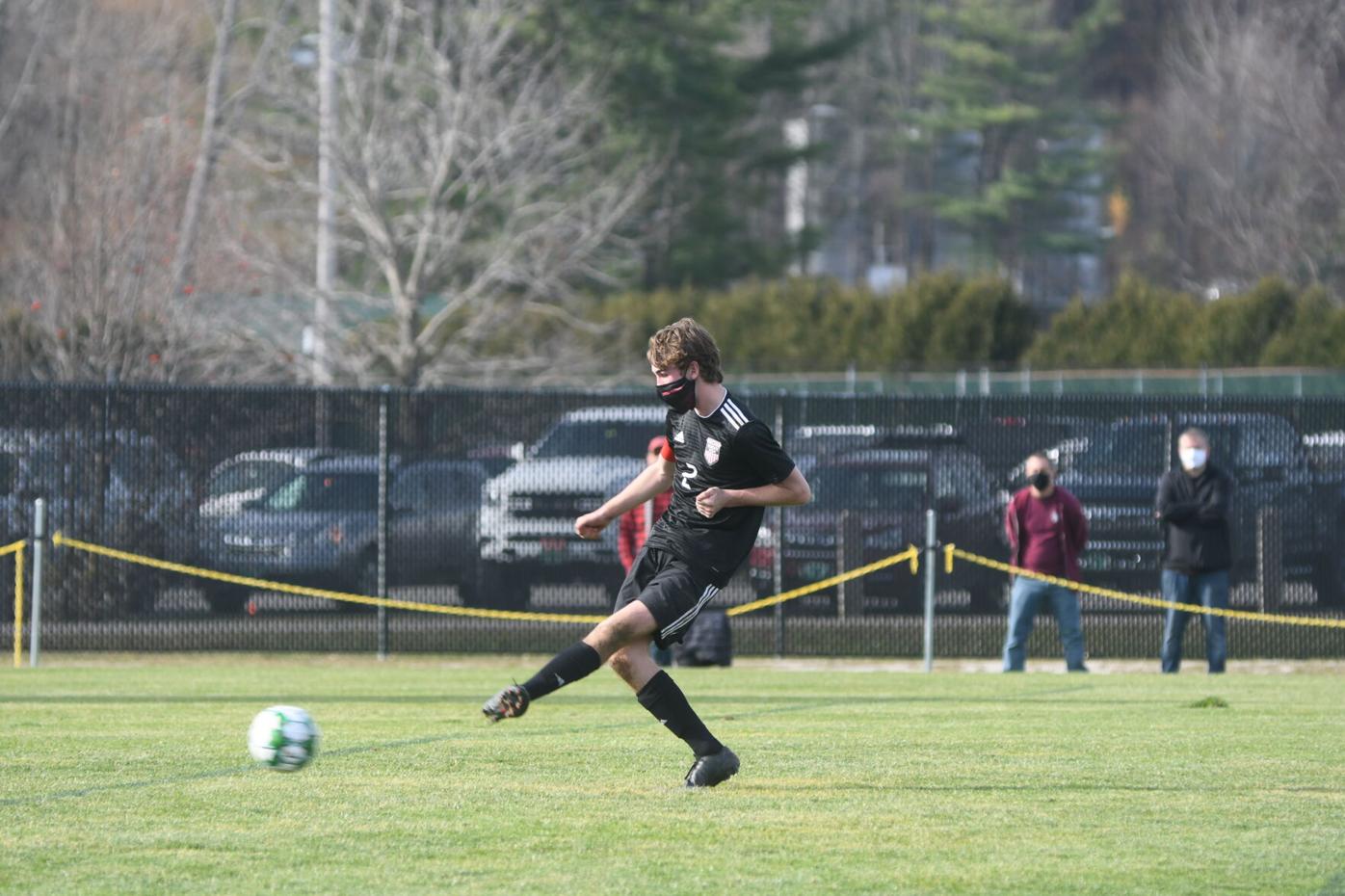 Twin Valley’s Colin McHale converts his penalty kick during a shootout with Proctor in the Division 4 state championship soccer match on Nov. 7 in Manchester. 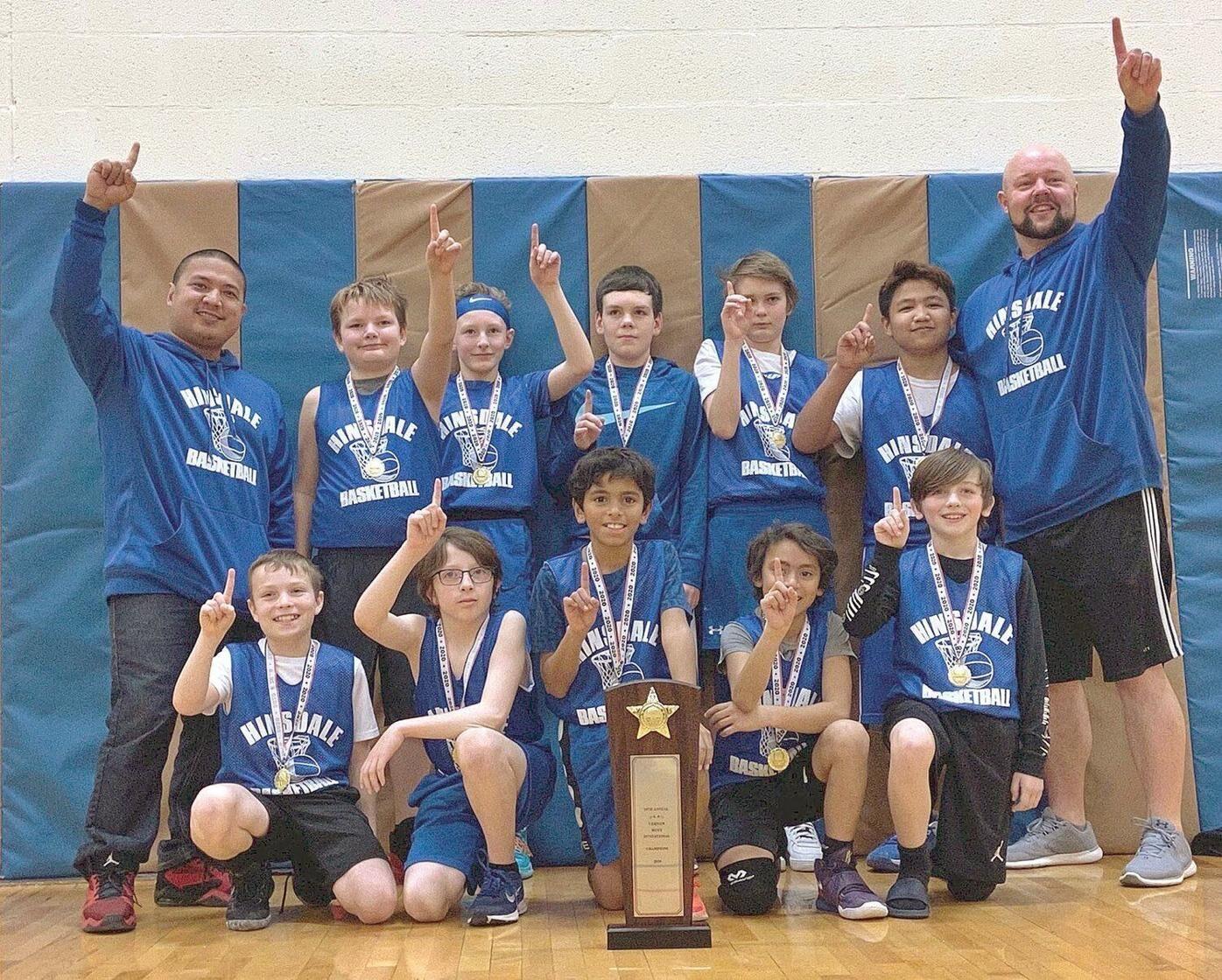 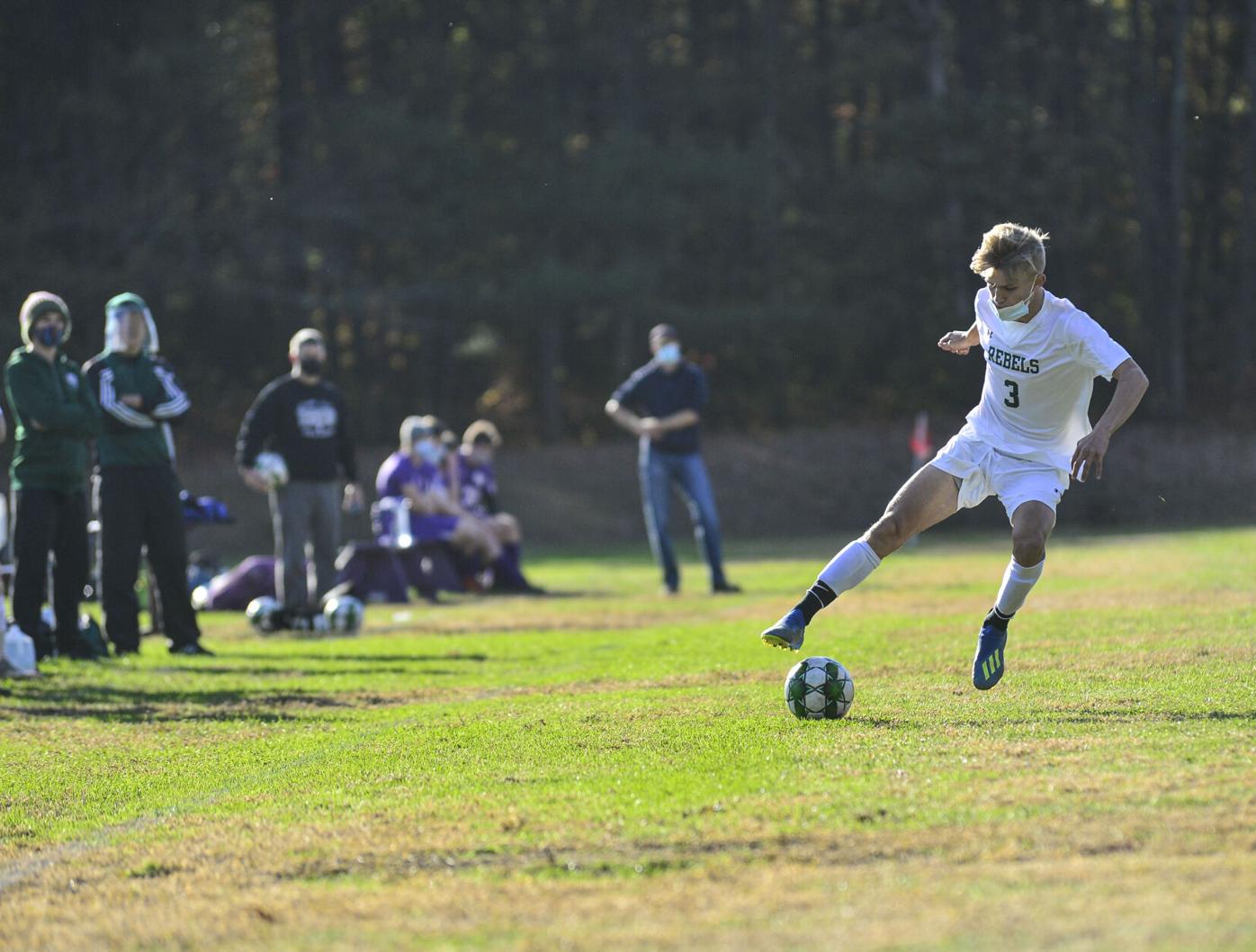 Bellows Falls’ Grace Bazin, center, and Maya Waryas celebrate a goal by Bazin during the Division 1 state championship field hockey game in Manchester. Goalie Jaia Caron made five quality saves in the last 15 minutes as the Terriers topped CVU 2-0 to cap off a perfect season.

Twin Valley’s Colin McHale converts his penalty kick during a shootout with Proctor in the Division 4 state championship soccer match on Nov. 7 in Manchester.

BRATTLEBORO — With a mask covering her face and media members keeping their distance, Grace Bazin responded to questions about her undefeated varsity field hockey team on Halloween in Manchester.

“We came together as a family this season,” said the Bellows Falls junior. “We’ve been practicing hard and we all really wanted it.”

The 11-0 Terriers, who have been named the top Reformer sports story for 2020, worked especially hard on penalty corners this fall. They scored on two of them in the Division 1 state championship game, with Bazin driving the ball home from in close each time.

“We had several very successful corners this year, with the ball going to various players on the circle and then another player stationed inside the circle ready to either deflect the ball in or get the garbage goal off the goalie’s pads,” noted Bellows Falls coach Bethany Coursen. “All of this takes skill, patience, and keeping your stick down and being aggressive.”

It’s something that the Terriers work on during every practice, which has helped the powerhouse program win five state titles over the last six seasons.

“I think my team is pretty amazing. They work super hard,” Coursen added.

The Reformer’s other top sports stories from 2020 are shown below.

Legendary coach Buddy Hayford had held mock shootouts after some of his practices this year to simulate the players’ legs being heavy following an overtime session. The prepared Wildcats then went 5-for-5 on penalty kicks to beat Proctor in the state finals.

“I truly believe the key to our success over the years with penalty kicks is simple — they have no fear of making mistakes and they are very good at visualizing the ball hitting the back of the net,” Hayford said. “They are taught to have a particular routine every time: the run-up to the ball, the appropriate surface contact between the foot and ball, non-kicking foot placement, and to never change their mind with regards to where they plan to shoot the ball.”

Colin McHale, Luke Rizio, Aaron Soskin, Izaak Park and Finn Fisher all beat Proctor keeper Ian French from 12 yards out on Nov. 7 in Manchester to keep the trophy in Whitingham.

Just after the movie “Parasite” swept the Oscars in February, the Brattleboro Union High School varsity boys Nordic ski team brought a broom to the trails.

Sam Freitas-Eagan, Nolan Holmes, Henry Thurber and Declyn Tourville won all four Division 1 state championship events for the Colonels, including a pair of 5k races and a couple of relays. In the freestyle relay, Tourville led off, Holmes put the purple and white in front, Freitas-Eagan extended the lead and then Thurber brought home the gold medal.

“At the start of this season, their team goal was unequivocal — win states,” BUHS coach Amanda Dixon said. “And win they did.”

“#BLM” for “Black Lives Matter” was an important movement when members of the Bellows Falls varsity girls cross-country team were preparing for a three-peat during the warmer months.

“The kids (for all sports) had all summer to prepare themselves for the fall season. I felt there was no excuse for any kid, in any sport to come into a season not physically ready,” commented BF coach Josh Ferenc.

The Terriers would go on to win the Division 3 championship again, beating runner-up Thetford 27-33 at the state meet.

“All season I instilled a pragmatic approach of what we could control: thoughts, effort, attitude and behavior,” Ferenc recalled. “Then it came down to race day, and the execution of all the summer miles, workouts, teachings and practices.”

The Dow Jones industrial average wasn’t the only thing that dropped in March.

Taylor Goodell went up high to catch a pass from Molly Potter, dribbled across the paint and kissed home a left-handed shot over Winooski defender Amina Osman to give herself 1,000 career points.

“That milestone meant so much to me. My hard work over my four years and especially my senior year to get to that point all paid off,” Goodell noted. “It is a great memory that I’ll have forever and I’m so thankful for all of my teammates, coaches, family, and supporters from over the years.”

The Bellows Falls senior entered that playoff game with 998 career points and had at least five cameras aimed at her whenever she touched the ball.

“I remember not being able to hit a shot almost the whole first half and being very frustrated because I knew that all I needed was one basket,” said Goodell. “However, I didn’t give up and I kept giving my best effort.”

As murder hornets became a threat in Washington, Tammy Richards was chasing people down in the Green Mountain State.

The Williamsville resident swept all four Brattleboro virtual Fun Run road races during Week 10 over the summer. She also prevailed in the Run For Recovery 5k and three-mile Jerry Gagliardi Memorial Turkey Trot.

“I’d have to say that one of my best running memories was setting a PR for myself up Stickney Brook, as I’ve never really embraced the hills as a flat-lander from New York,” she stated. “My second best memory is helping to pace my friend Max as she set a marathon PR in a virtual event out on Green River Road.”

Richards, who participates in Hank Lange’s Tuesday morning track workouts at Brattleboro Union High School, is looking forward to the Island Pond marathon as well as doing the Mount Washington race next year.

The Weeknd had the top song of the year and it almost looked like goalies were affected by “Blinding Lights” each time Riley Barton took a shot on the pitch.

Barton finished his high school soccer career with a Leland & Gray record 69 goals, which topped Ben Shulga’s previous mark of 56 tallies. The midfielder helped the Rebels to a 30-23-3 record in his four varsity seasons.

“The game allows me to escape from life and just enjoy myself,” the senior said.

Just before the toilet paper shortage, one of Hinsdale’s youth basketball teams was on a roll.

Chris Colon hit a buzzer-beater with .01 seconds left, assisted by Elijah Colon, to give the Granite Staters a thrilling 22-21 victory over Bernardston in a semifinal. Hinsdale 2 then defeated Hinsdale 1 26-25 to secure the Vernon Recreation Department’s Grades 5-6 Invitational Basketball Tournament title.