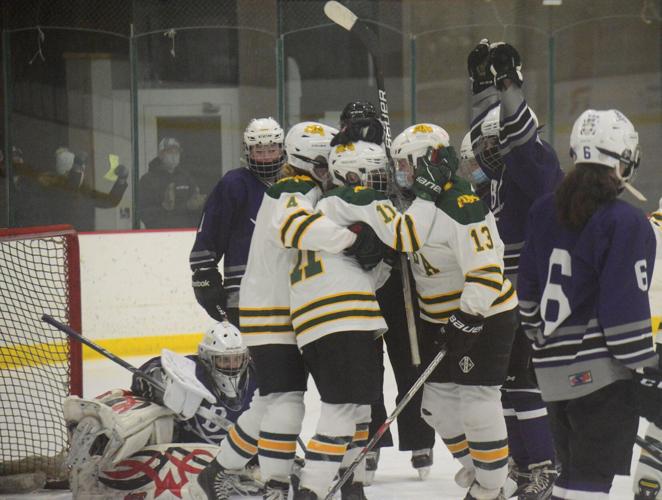 Burr and Burton players celebrate after scoring a goal during Monday's game against Brattleboro. 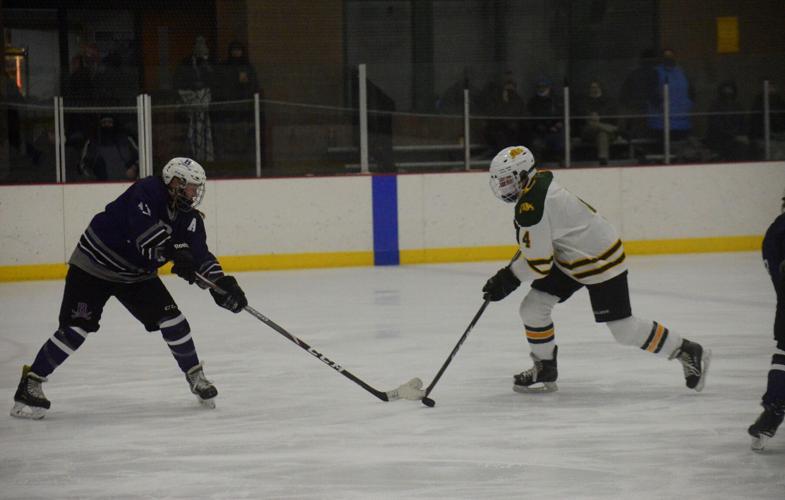 The Bulldogs erased a three-goal deficit to beat Brattleboro 4-3 on Monday.

Burr and Burton players celebrate after scoring a goal during Monday's game against Brattleboro.

The Bulldogs erased a three-goal deficit to beat Brattleboro 4-3 on Monday.

Then Mia Paligo lit the lamp for the Bulldogs with 8:16 left in the period, and they never looked back.

BBA strung together its best two periods of the season for an epic 4-3 comeback victory.

Skylar Smith got things going for BBA on the power play goal, slicing past multiple Colonel defenders. The BBA forward made her way around the Brattleboro net, pressuring goalie Angela Jobin with a shot on net. Jobin denied the chance, but Paligo was there for the rebound to get the Bulldogs on the board.

BBA seized the momentum from that point forward.

“I thought that we dominated play from that power play on,” said BBA coach Ed Lewicki. “We worked our butts off. I couldn’t be happier.”

A Lauren Barrows score four minutes later, again on a power play, pulled the Bulldogs within one. Smith once again skated past a pair of Brattleboro defenders and pressured the defense.

The equalizer and eventual game-winner both came off of Kaelin Downey’s stick in the third period.

With 13:42 left in regulation, Downey fired a one-timer into the top right of the net. The BBA sophomore had open ice in front of her on a breakaway and made the Colonels pay. Two minutes later, Downey stuck her stick into the crease as the puck escaped Jobin. The Brattleboro goalie couldn’t find the puck, and Downey punched in the difference maker with 11:33 left. BBA continued pressuring the Brattleboro net over the final 10 minutes, staying the aggressor.

The visitors struck gold with its first real scoring opportunity at the 13:07 mark of the first period. BBA was called for tripping, giving the Colonels a two minute power play. They would only need five seconds to cash in on it.

Senior captain Juliana Miskovich won the face-off near the Bulldog net, sending the puck toward the center of the ice and right to Willow Romo’s stick.

The Brattleboro defender fired a slapshot past BBA goalie Mac Thuermer, giving the visitors a 1-0 advantage less than two minutes into play.

Three minutes later, another penalty bit BBA. This time, it was Miskovich on the scoring end of an assist from Romo.

The Colonels added to their lead at the 10:13 mark of the second period. Sophia Mikijaniec was the beneficiary of Brattleboro flooding the net, finding the puck and flicking it past Thuermer to make it a 3-0 contest.

Brattleboro looked as if it was about to cruise to a win in Manchester, but that’s when BBA stepped on the gas.

Thuermer stepped up huge over the final two periods, making save after save to keep the momentum in BBA’s favor as it chipped away. She finished with 13 saves.

Her last one showed her improvement as the game progressed. Brattleboro had a face-off near the BBA net with 45 seconds left. Miskovich once again won, sending it to Romo at mid-ice for the one timer.

The same play that gave Brattleboro the lead early was denied in the final seconds by Thuermer, who made a nice leg save to seal the win.

BBA improved to 3-9-1 on the season and will host Harwood at Riley Rink on Wednesday.