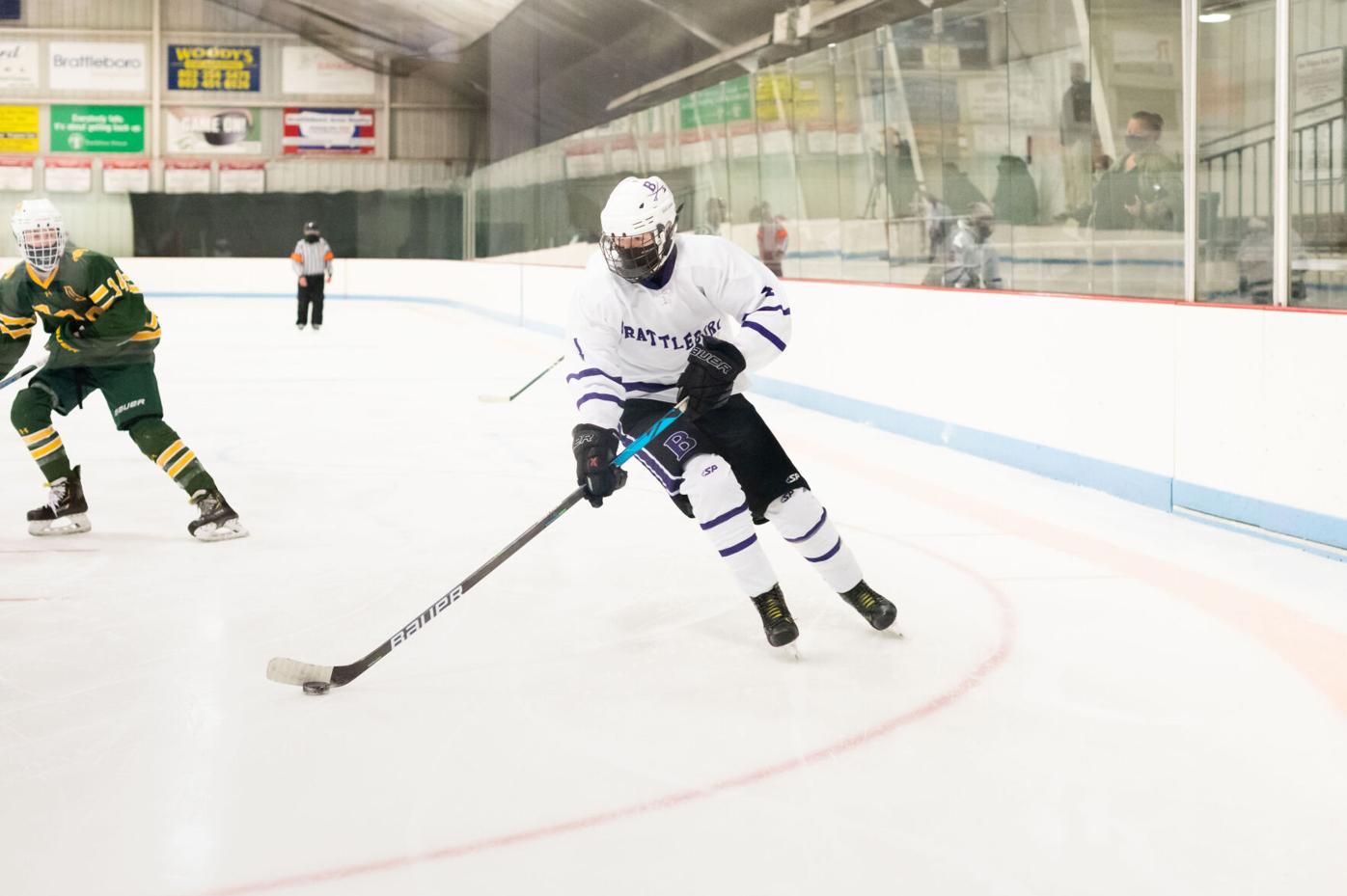 Brattleboro’s Will Taggard advances the puck towards the net during Saturday’s heated Division 2 semifinal game against Burr and Burton at Memorial Park. 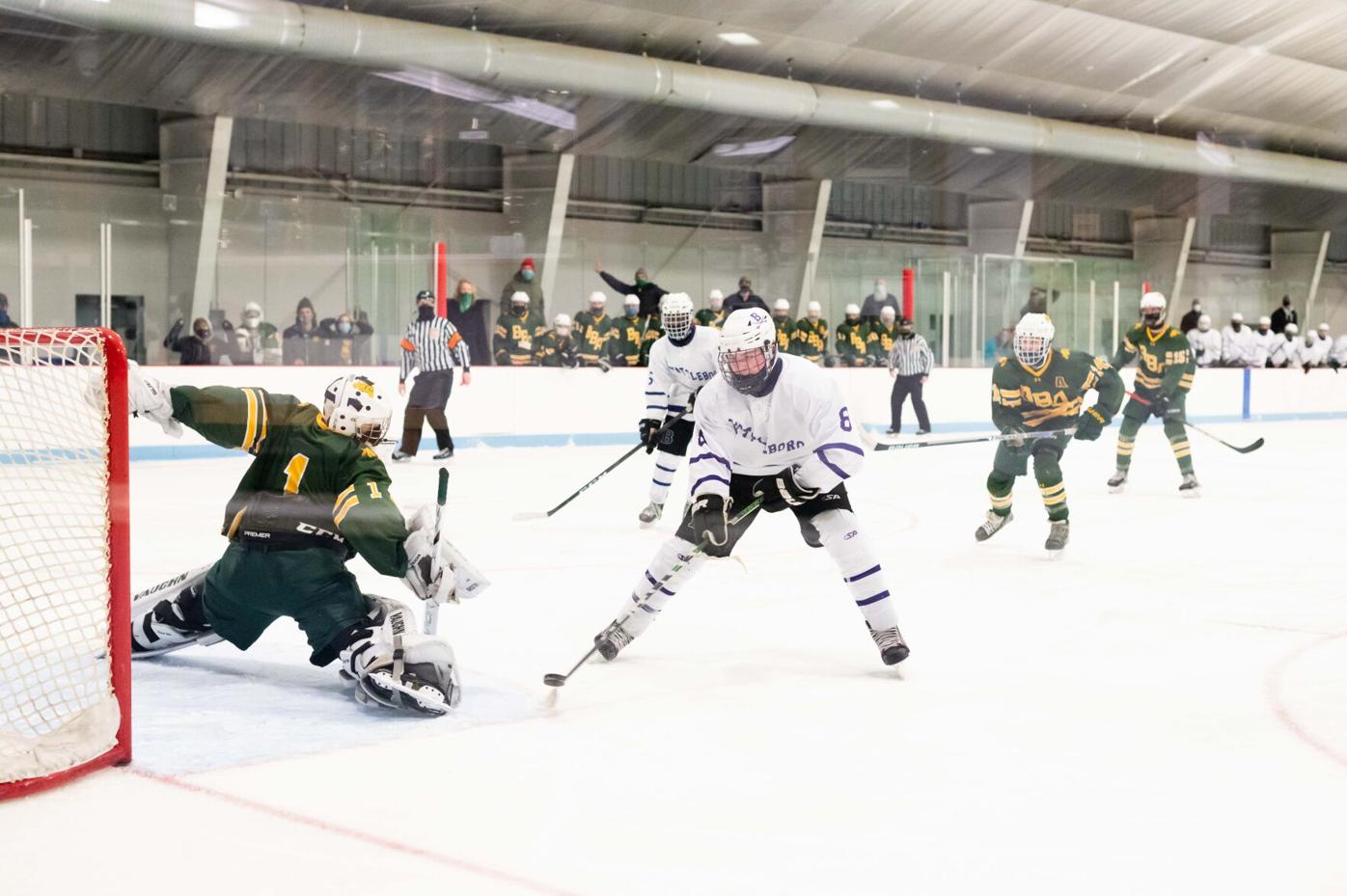 Jack Pattison moves in for the Colonels. 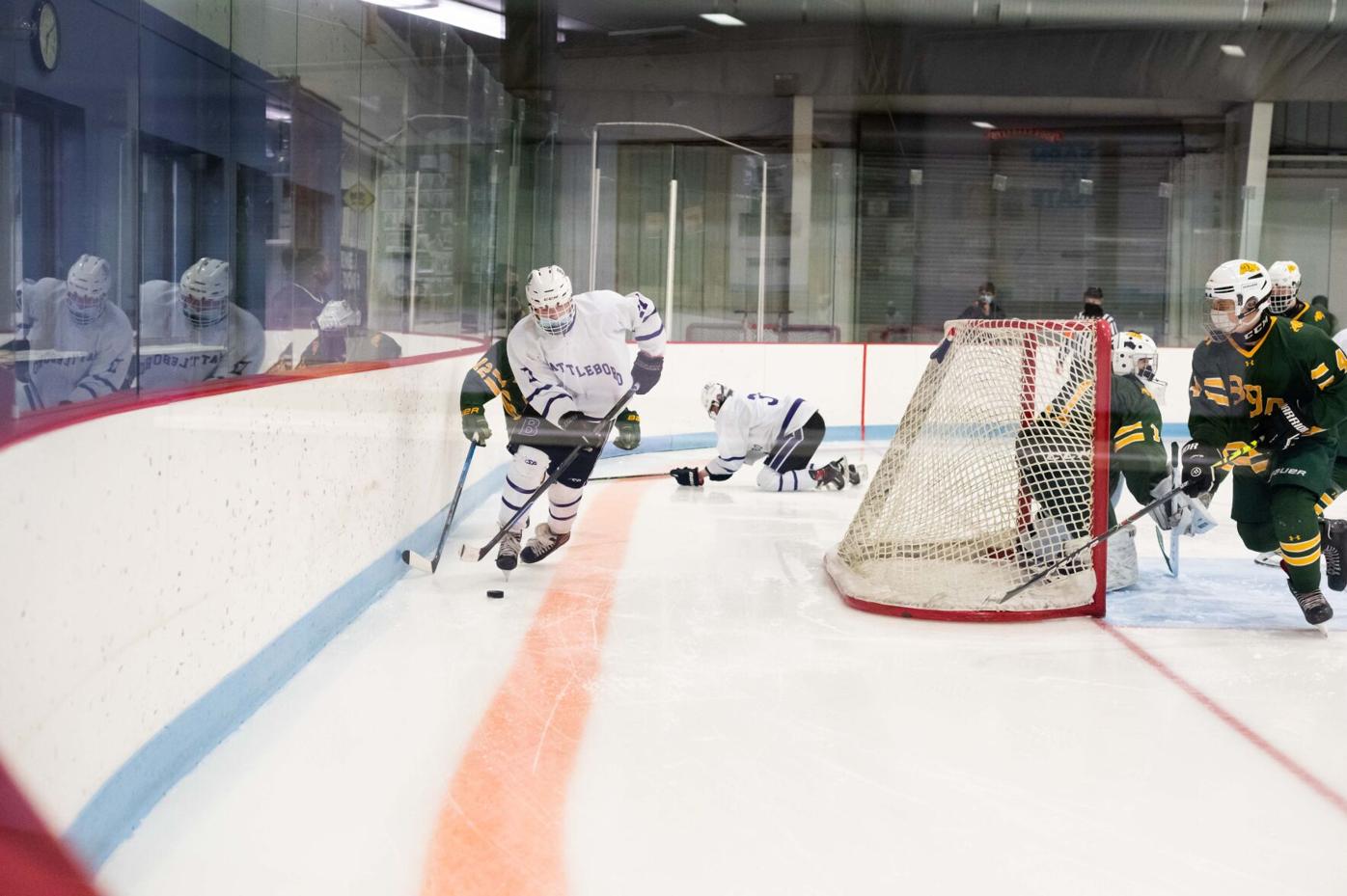 Brattleboro’s Mason Foard brings the puck behind the net. 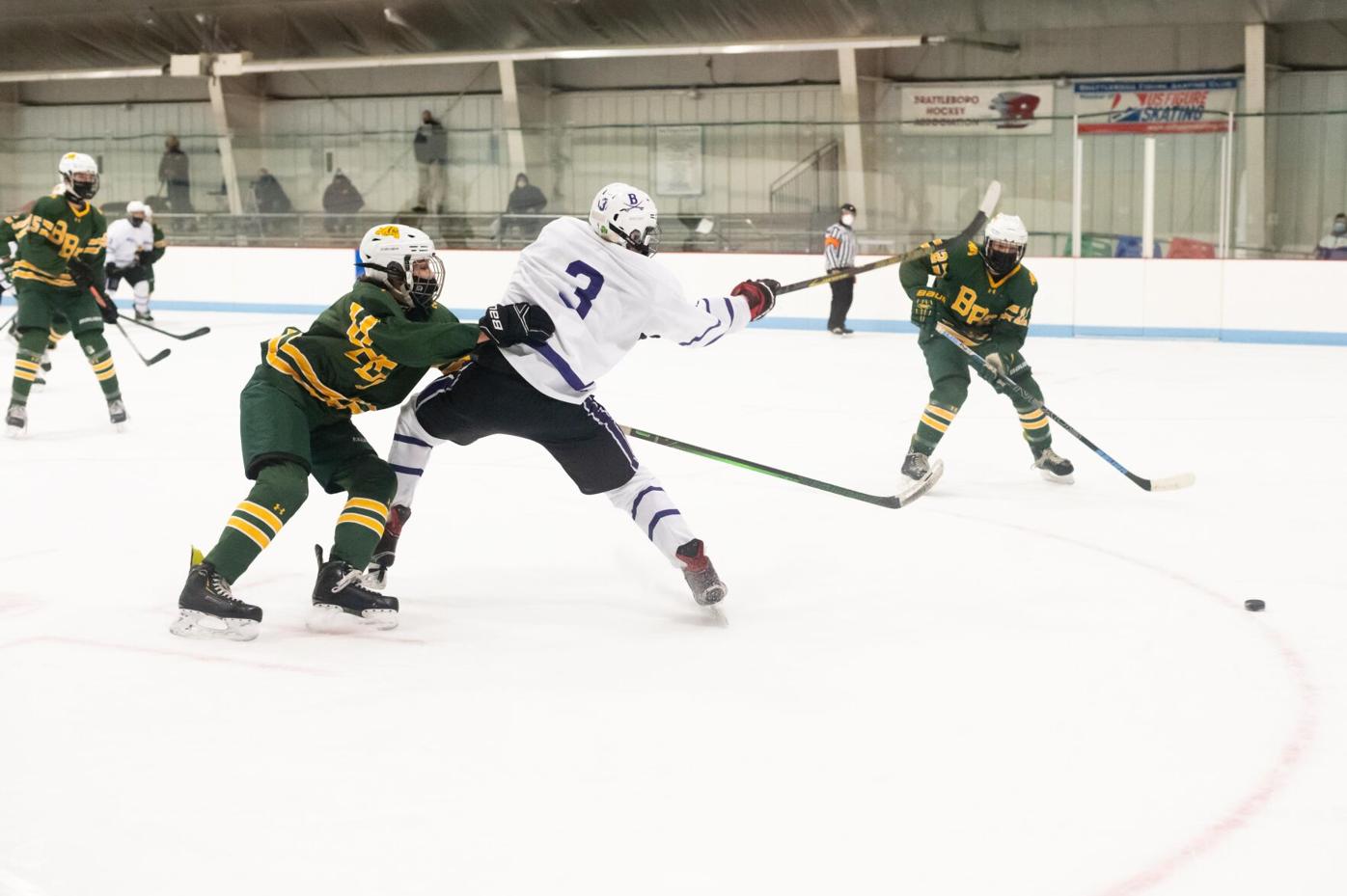 Brattleboro’s Gavin Howard gets a shot off.

BRATTLEBORO — The Madness of March clearly is not limited to basketball. In a crazy affair Saturday, which would have been befitting of a packed rink, the second-seeded Brattleboro boys ice hockey team bested No. 6 Burr & Burton 6-5 with a wild third-period comeback in a Division 2 semifinal.

The Colonels are chasing the school’s first ever title in a return to the state championship for the first time since 1994. They will face defending champion Harwood on Wednesday at 7:30 p.m. in Barre. Harwood advanced with a 3-0 victory over Middlebury in the other Final Four matchup.

Brattleboro started quickly. Will Taggard won the opening faceoff, securing the always important puck possession which led to a sudden score just 21 seconds into the game. It was Jack Pattison from the right side, assisted by Sam Hall and Taggard. The positive start continued with a huge early check by team hitman Hall, who plastered a Bulldog into the boards. The good vibes continued when Hall drew a tripping penalty against B&B as he circled into the slot. The Colonel power play was ineffective, however, and things could have got worse had Ryan Gerard not broke up a B&B 2-on-1 rush with a poke check. Nine seconds before the end of the period, B&B was whistled for too many men on the ice and the Colonels took a power play into the second period after getting the best of the play in the defense dominated first.

The start of the second period was the beginning of the madness. When was the last time, at any level of hockey, that a team scored on the power play and on the next drop of the puck was down 5-on-3 with two in the box? The Colonels pulled off the embarrassing feat. After Pattison scored on the power play from Mason Foard and Gavin Howard, two Colonels took foolish game changing penalties for hitting after the whistle. Rather than stomping out the Bulldogs’ will, the penalties gave them life. Within a minute, B&B made it 2-1. Then Taggard broke up a dangerous 3-on-2 with an old fashioned hip check at the blue line. At this time, coach Eric Libardoni gathered the troops for his own version of March Madness. B&B would tie it up at 1:38 from the slot and things weren’t going the Colonels’ way. Taggard scored what looked like a huge momentum breaking goal at the :20 mark. Gerard sent him in alone with a long pass to the blue line and Taggard beat the keeper top shelf glove side with a forehand.

The stemming of the tide didn’t last long, however. At 13:22 of the third, B&B in on a 2-on-2, had the off puck rusher spin a Colonel defender around at the blue line. That made it a 2-on-1 and he scored after the puck was passed to him. B&B took the lead after a Colonel defenseman was caught pinching on a play and the Bulldogs converted the 2-on-1 with a snipe wrister from the top of the circle. Midway through the period, B&B made it 5-3 on a top shelfer. Less than a minute later, Gavin Howard came up big: after a pass from Gabe Heiden, he moved to the slot and wristed it in. The Colonels tied it at 5-5 with 3:52 to go, with Taggard being set up by Pattison and Hall. Less than 30 seconds later, Derek Parsons sent Howard steaming out of the zone down the right side and his wrister from the right circle became the game winner.

After the game, coach Libardoni was frustrated with the Colonels’ needless penalty situation which let a great opportunity for these kids and a game in control almost slip away. He was very proud of the comeback, however. The message was clear to the team postgame, that better emotional control would be needed against top-seeded Harwood.

Harwood is led by forwards Finn O’Hara and Skylar Platt. They were the difference on Feb. 27, when Harwood beat the Colonels 6-4. Brattleboro had rallied from down 5-2 before Harwood hit an open net. The Colonels’ hopes hinge on their season-long scoring ability and containing the two big guns.