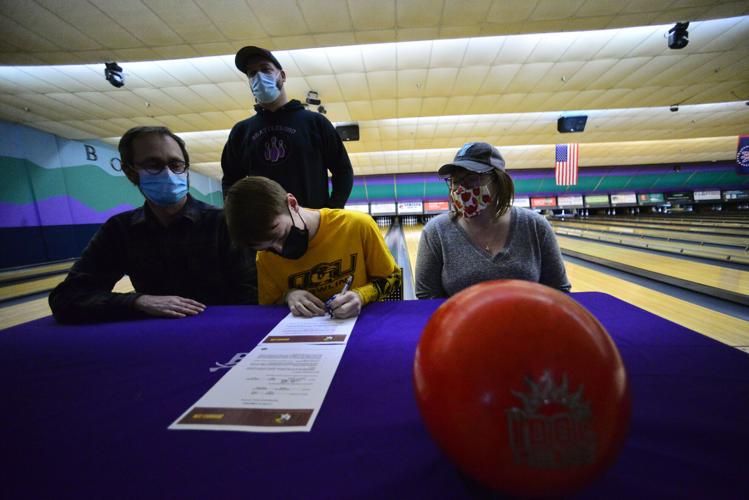 With his parents and coach looking on, Brattleboro Union High School student Lucas Forthofer signs a National Letter of Intent on Thursday to bowl for Quincy University. 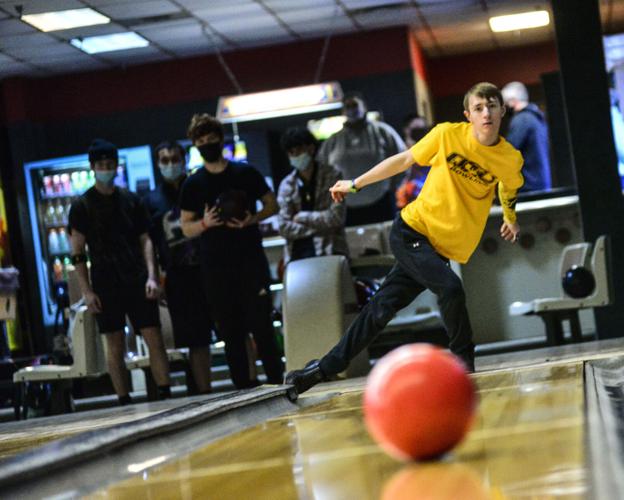 Lucas Forthofer is currently ranked third in the state with a 196.1 average.

With his parents and coach looking on, Brattleboro Union High School student Lucas Forthofer signs a National Letter of Intent on Thursday to bowl for Quincy University.

Lucas Forthofer is currently ranked third in the state with a 196.1 average.

BRATTLEBORO — Lucas Forthofer has been using his steady left hand to roll strikes and pick up spares for the past eight years, but the southpaw was reaching for a pen instead of a ball on Thursday at Brattleboro Bowl.

The Brattleboro Union High School senior was about to sign a National Letter of Intent to compete for the Division 2 Quincy University men’s bowling team.

“I have given a lot of hard work to the sport over the years and I hope I can contribute this hard work to make an impact to the program during my freshman year,” said the son of Scott and Sara Forthofer.

The 18-year-old is currently ranked third in Vermont with a bowling average of 196.1. He took the time to explain what goes through his mind during each attempt.

“Once I pick up the ball and step onto the approach, I am thinking of where I need to be standing and where I have to put the ball on the lane before I’m set. Once I become set, I take a deep breath and clear my mind until the ball is out of my hand. Once a ball is delivered, it is in the back of my mind and out of my worries while I focus on my next ball — whether it be picking up the spare, beginning the next frame, or making an adjustment.”

Forthofer, who moved from Montana to Dummerston with his family in August, recalls his fourth-grade teacher handing out flyers for a youth bowling league. A few weeks later, he participated in the league and the alley eventually became his second home.

“My favorite thing about the sport has to be the people involved within the bowling community, including competitors, teammates, coaches, and fans. It’s just one big family that supports each other through everything, and I am very proud to be a part of it.”

He helped the Colonels finish first in the Southern Vermont League this winter, ahead of Windsor and Hartford. The purple and white are now tied for second in the state with Burlington.

“I have many great memories involving bowling, but my favorite memory has to be competing in the Junior Gold Championships last July in Indianapolis. It was amazing to bowl alongside some of the best youth bowlers across the country and I get to do it again this July in Grand Rapids, Michigan.”

Forthofer visited Quincy University in January. He will be majoring in Aviation at the Illinois school, with a goal of becoming an airline pilot.

“He will bring a lot to the Quincy team, and I think he can really help build that up-and-coming program. They’re lucky to have such a confident yet kind bowler coming to their program, who I know will do well,” mentioned BUHS coach Will Bassett.

On Senior Day, Forthofer powered his squad to victories over Windsor and Hartford with individual games of 192 and 212.

“Lucas is a fantastic bowler who seems unflappable, even in high stress moments. He’s cool under pressure and is incredibly consistent with his spares,” said Bassett. “He’s been easy to coach and is very driven to be the best bowler he can possibly be.”