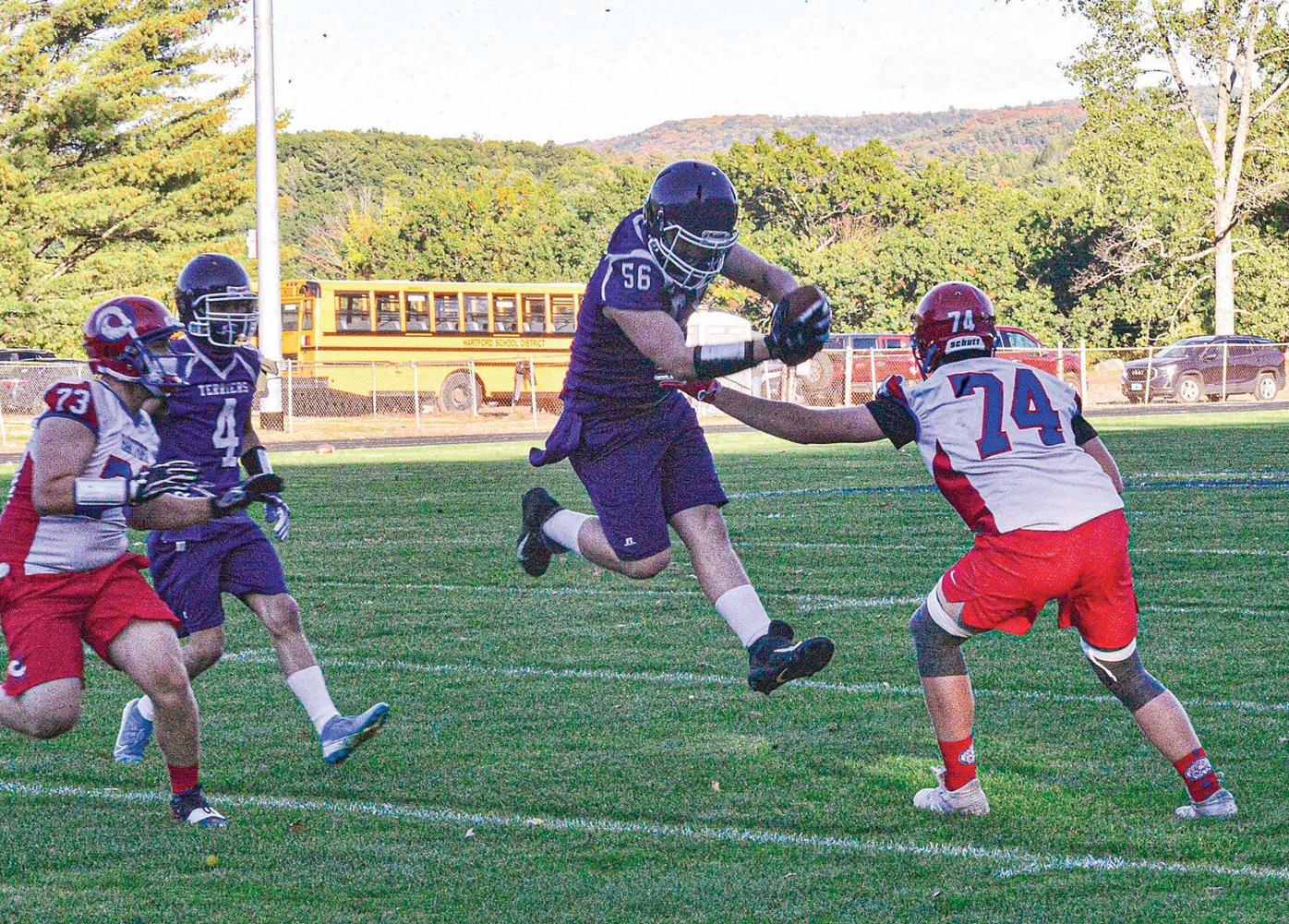 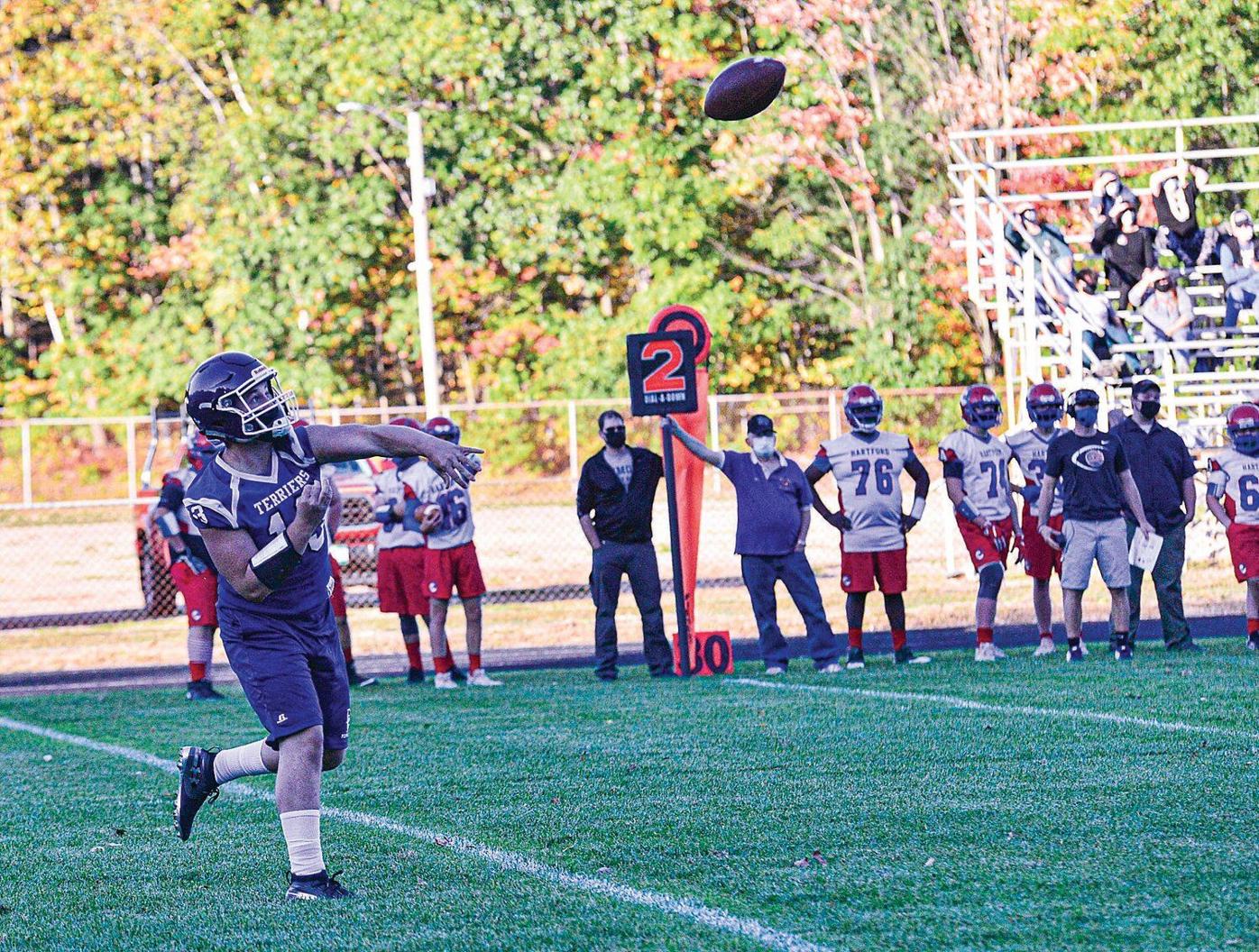 Grady Lockerby throws a second-quarter bomb for the Terriers. 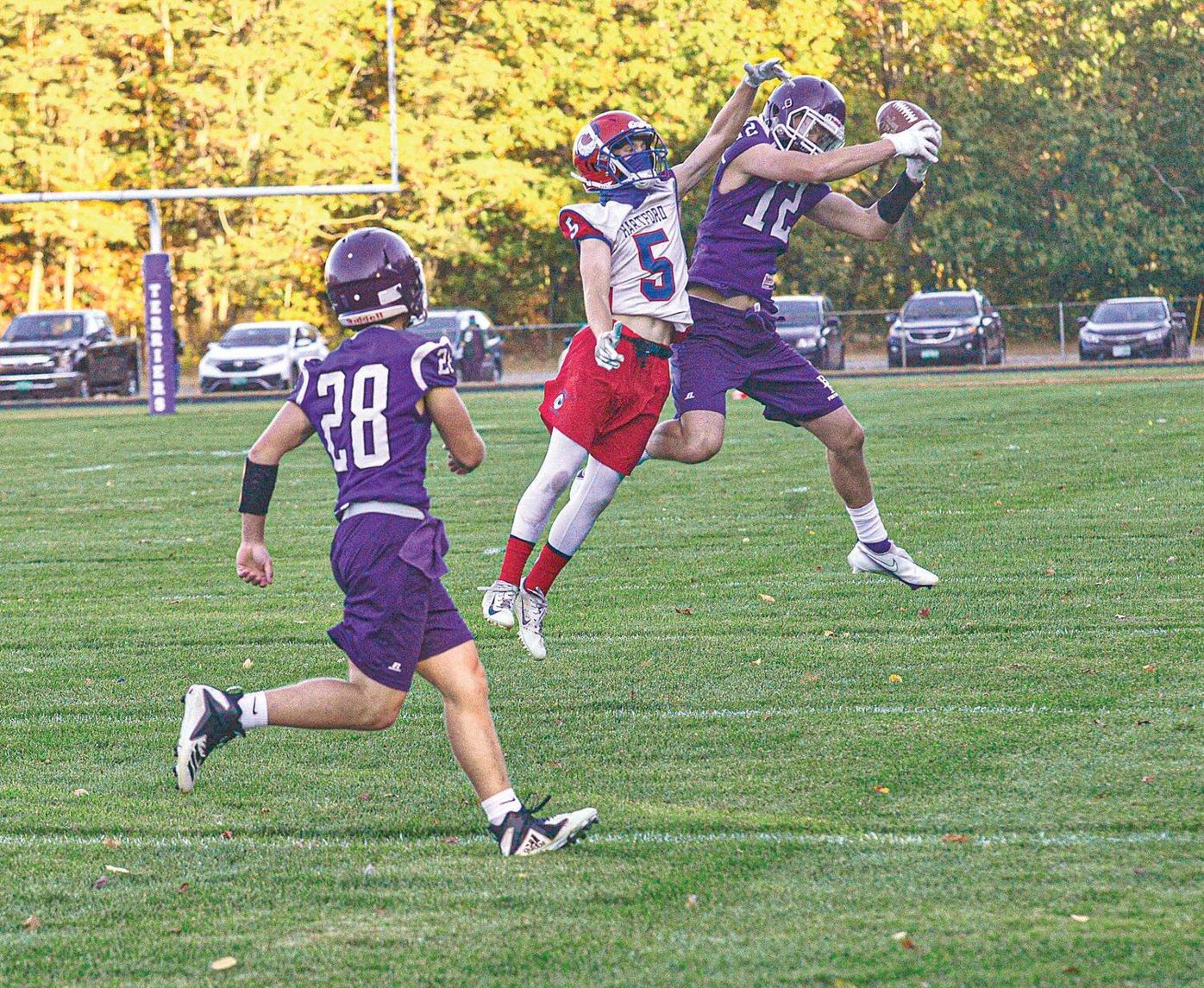 Bellows Falls senior captain Logan Lisai catches the ball for a 16-yard gain during the second quarter of Wednesday's season opener while being covered by Hartford's Alex Bushway. 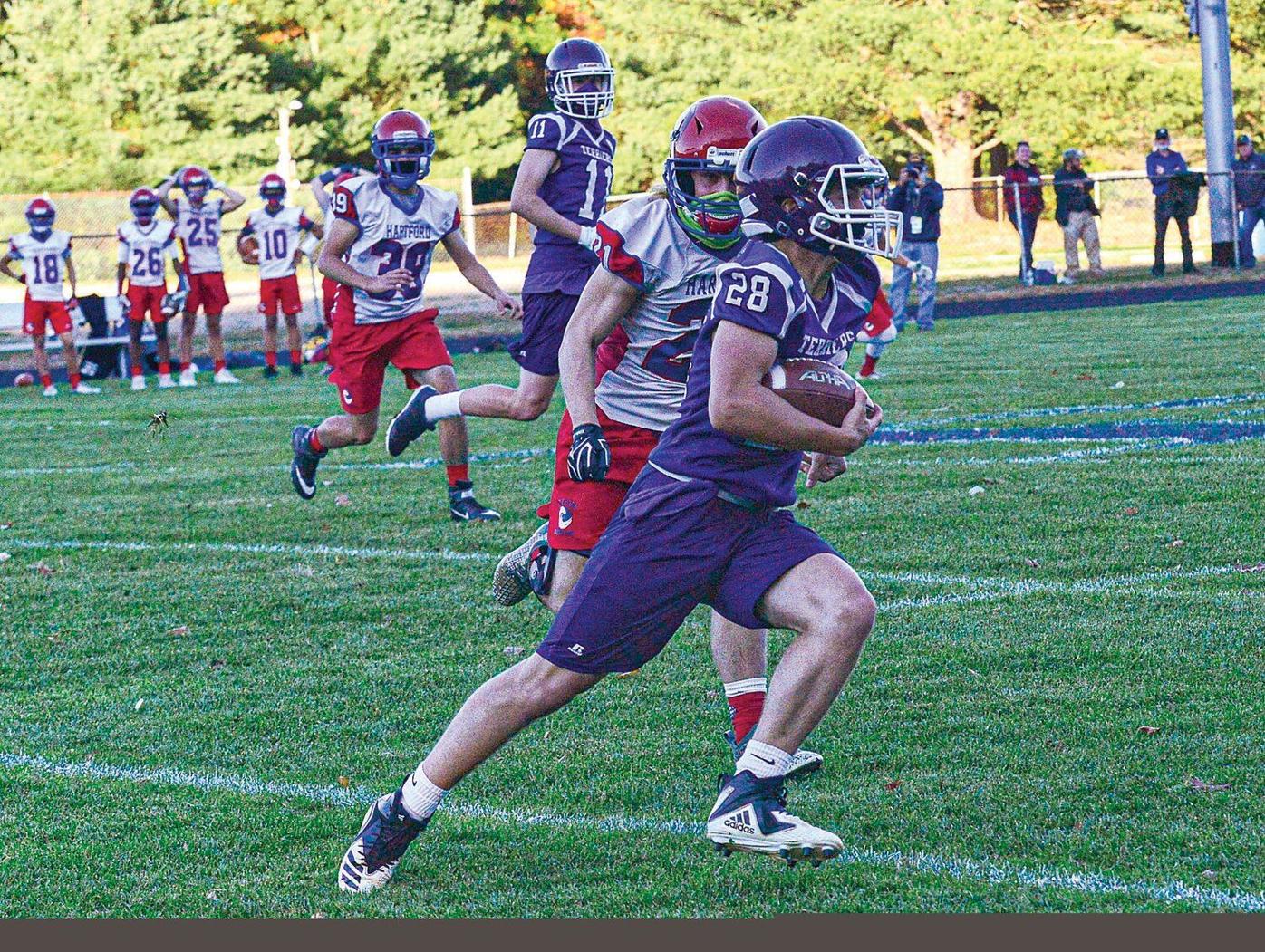 BF's Harrison Gleim gets loose in the open field after hauling in a Grady Lockerby pass.

Grady Lockerby throws a second-quarter bomb for the Terriers.

Bellows Falls senior captain Logan Lisai catches the ball for a 16-yard gain during the second quarter of Wednesday's season opener while being covered by Hartford's Alex Bushway.

BF's Harrison Gleim gets loose in the open field after hauling in a Grady Lockerby pass.

WESTMINSTER — Hearing such things as the school band performing and car horns being honked in order to celebrate touchdowns were some of the things being missed by the few fans at Hadley Field on Wednesday afternoon.The sounds of vicious hits were also lacking.

In its first touch football game of the season, the Bellows Falls varsity team turned the ball over four times and lost to visiting Hartford 37-20.

"Watching today's 7-on-7 game was a much different experience than what we are used to. Masks for every person on and off the field. Very few fans. Marked seating. Extremely low energy from the normally super enthusiastic Bellows Falls players and fans. A strange version of what they are calling football is what our boys are forced to play this season," said Heather Gleim, who was there to root on her son and the Terriers. "They're strong boys, both inside and out, and will make the best of the season that's been handed to them. We are proud of them, and will be there to support them all the way."

She was able to see each Bellows Falls captain catch a touchdown pass in a game that used a running clock, was 100 percent passing, and gave quarterbacks a maximum of four seconds to throw per play. Grady Lockerby threw a quick six of 55 yards to Jack Burke and added a three-yard TD pass to Logan Lisai, while Jonathan Terry pitched in with a one-yard scoring strike to Dominic Kendall.

"I can't wait until next fall and neither can the kids," said Bellows Falls coach Bob Lockerby when asked after the game what he thinks of this style of football. "We were really looking forward to an outstanding (tackle football) season. You have no idea how hard we have worked."

As fans entered the parking lot, they were handed a roster that had a COVID-19 rules sheet stapled to it. Just before the game began, Bellows Falls Athletic Director Ian Fraunfelder announced that spectators needed to stay at least six feet away from each other, keep their mask on, and remain outside of the fence that surrounds the field.

Cole Jasmin completed his first 10 passes and threw a trio of TD strikes, helping the Hurricanes to a 20-7 lead in the first half. An underhanded scoring flip from Terry to Kendall got the hosts back in the game, before Hartford scored 10 consecutive points to pull away.

Seniors Kobe Peach and Jacob Dwinell each put on a show for the visitors. Peach caught seven total passes for 113 yards, while Dwinell looked like Barry Sanders at times — often eluding two or three touches after securing a quick hitter.

Jackson Balch, Jacob Seaver, Nolan Morse and Brody Tyburski all picked off a pass for the winners. Jake Moore had the Purple Gang's lone interception, on a ball that was tipped up in the air by teammate Owen Perry.

"This was the first time we've ever played it," noted coach Lockerby. "My kids entered the game all pumped up, wanting to hit people. This is a finesse game, though."

Known for pounding the ball between the tackles, Bellows Falls had four completions of over 35 yards in this one — Burke and John Herrington each hauled in two of those bombs. The hosts also used a little bit of trickery, with Lisai catching a short pass and then lateraling to Harrison Gleim.