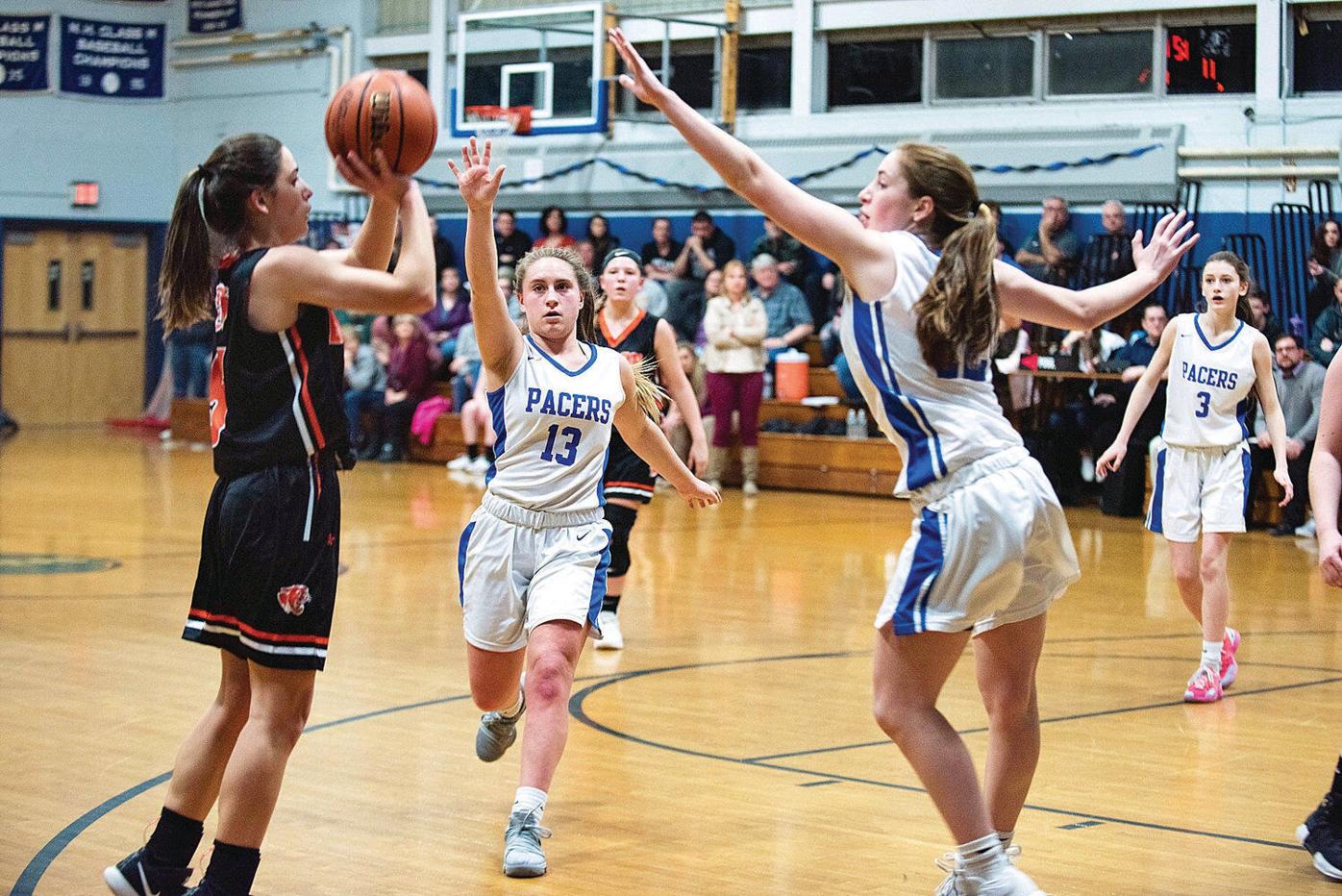 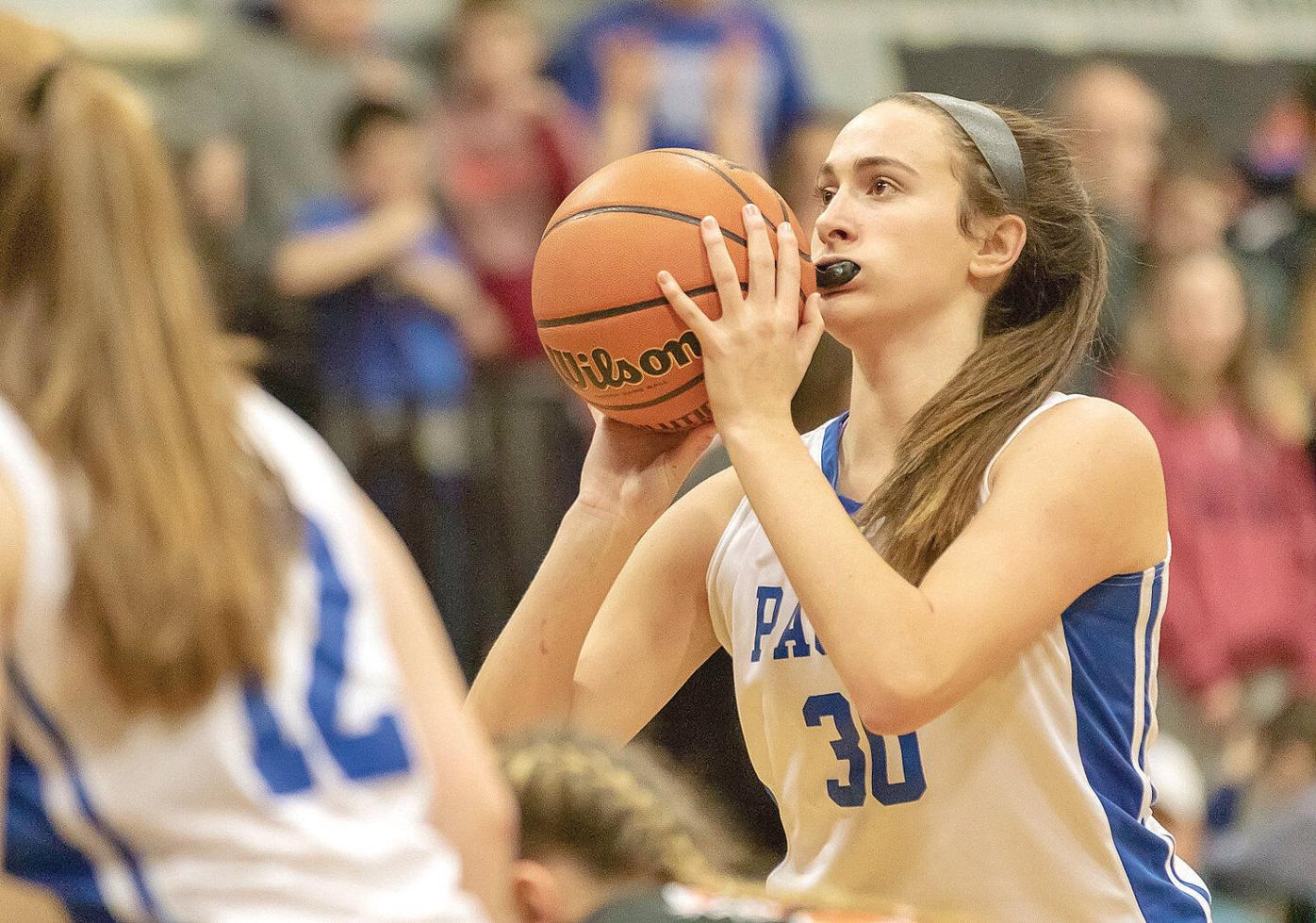 Hinsdale sophomore Angelina Nardolillo (30) scored a game-high 22 points on Thursday night to reach the 1,000-point milestone for her varsity career.

Hinsdale sophomore Angelina Nardolillo (30) scored a game-high 22 points on Thursday night to reach the 1,000-point milestone for her varsity career.

HINSDALE, N.H. — When she was younger, Angelina Nardolillo was watching as Skylar Bonnette and Skyler LeClair reached the 1,000-point milestone.

On Thursday evening, she was the one being mobbed by teammates.

The sophomore center made a layup with 2:25 remaining in a Division 4 quarterfinal, which gave her a game-high 22 points and one grand for her varsity career. Those in the student section went crazy and the nine other Hinsdale players swarmed their star.

"It felt amazing. It was so much stress off of my back. It felt good to do it on my home court," said Nardolillo after having her picture taken with several fans. "This is a big statement. I would say determination is what got me to this point."

The feat came during the sixth consecutive playoff victory for the third-seeded Hinsdale girls basketball team, which went on to beat No. 11 Lisbon 59-34 at "the Stable."

The defending champion Lady Pacers (19-1) will now face No. 7 Colebrook in a semifinal on Wednesday evening at Plymouth State University. Sage Smith pumped in 35 points as the Mohawks upset second-ranked Farmington 52-47 on Thursday.

"It's huge to get back to the Final 4. I'm glad that we are going again," stated Nardolillo. "It is a lot of pressure to repeat. We can do it."

Megan Roberts (12 points) and Delaney Wilcox (16 points) combined for seven trifectas in the first half as the hosts took control early versus Lisbon. A skip pass by Kleay Steever and a dish by Wilcox set up back-to-back treys by Roberts in the opening quarter, giving Hinsdale an 11-3 lead.

Audrey Martin drained a deep deuce, Amelia Tacelli scored with a strong move in the paint, Wilcox knocked down a pull-up jumper in transition, and Nardolillo delivered against a double team after going up high to catch a lob before the Lady Pacers took a 33-15 advantage to the intermission.

Hinsdale limited the Panthers to just one field goal in the third quarter, upping the spread to 45-18.

"De-fense! De-fense!" chanted members of the Hinsdale student section in unison. Olivia Pangelinan and Martin responded with solid zone defense along the baseline and steady rebounding.

Despite foul trouble, Nardolillo got hot in the second half. She made a couple of free throws and scored eight times in the paint, with her last layup — which was set up by Kloe Valladares — giving her 1,000 points for her varsity career.

No. 1 Littleton and No. 4 Woodsville will meet in the other semifinal matchup, meaning the 2019 Final 4 is the same as last year's.