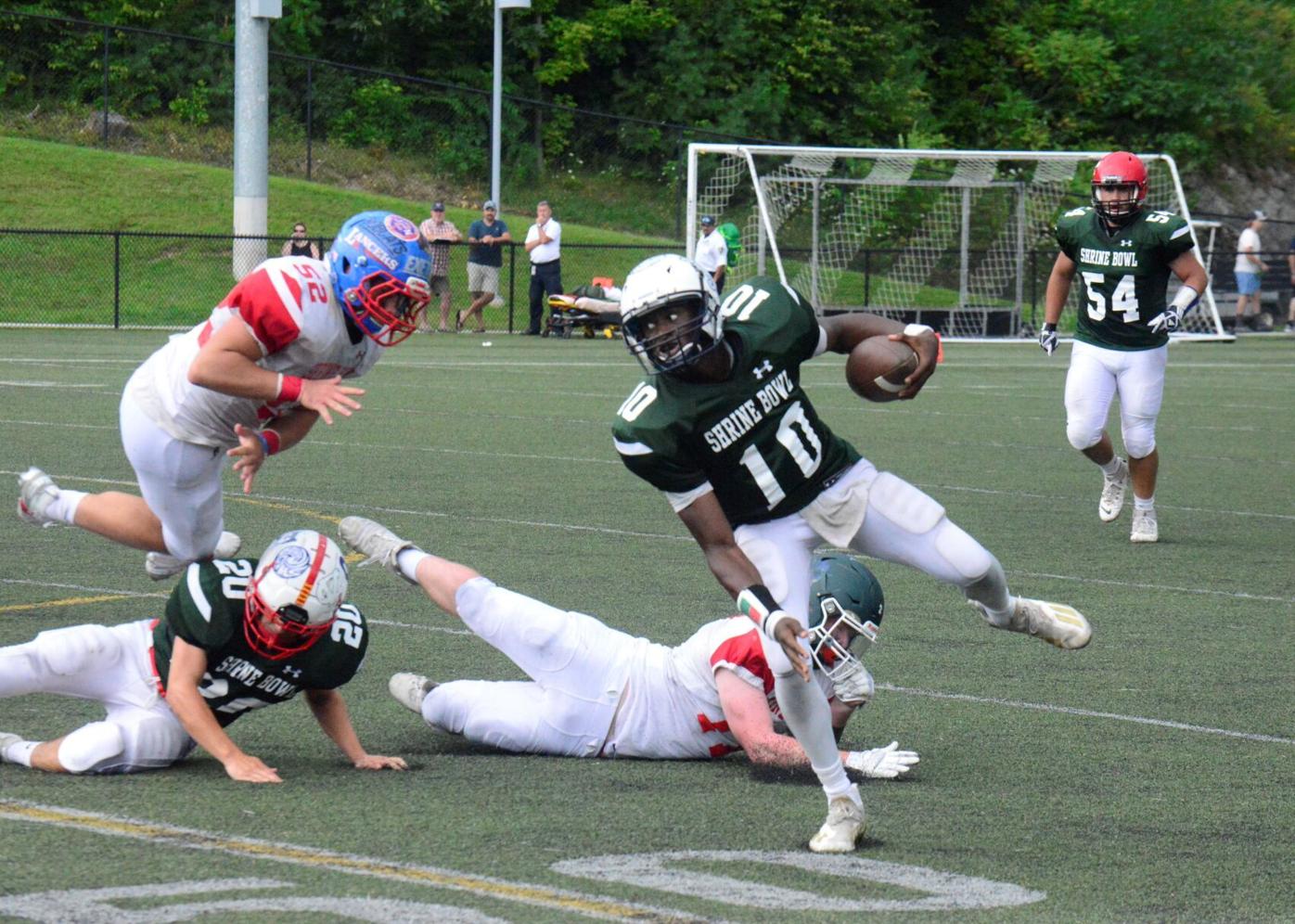 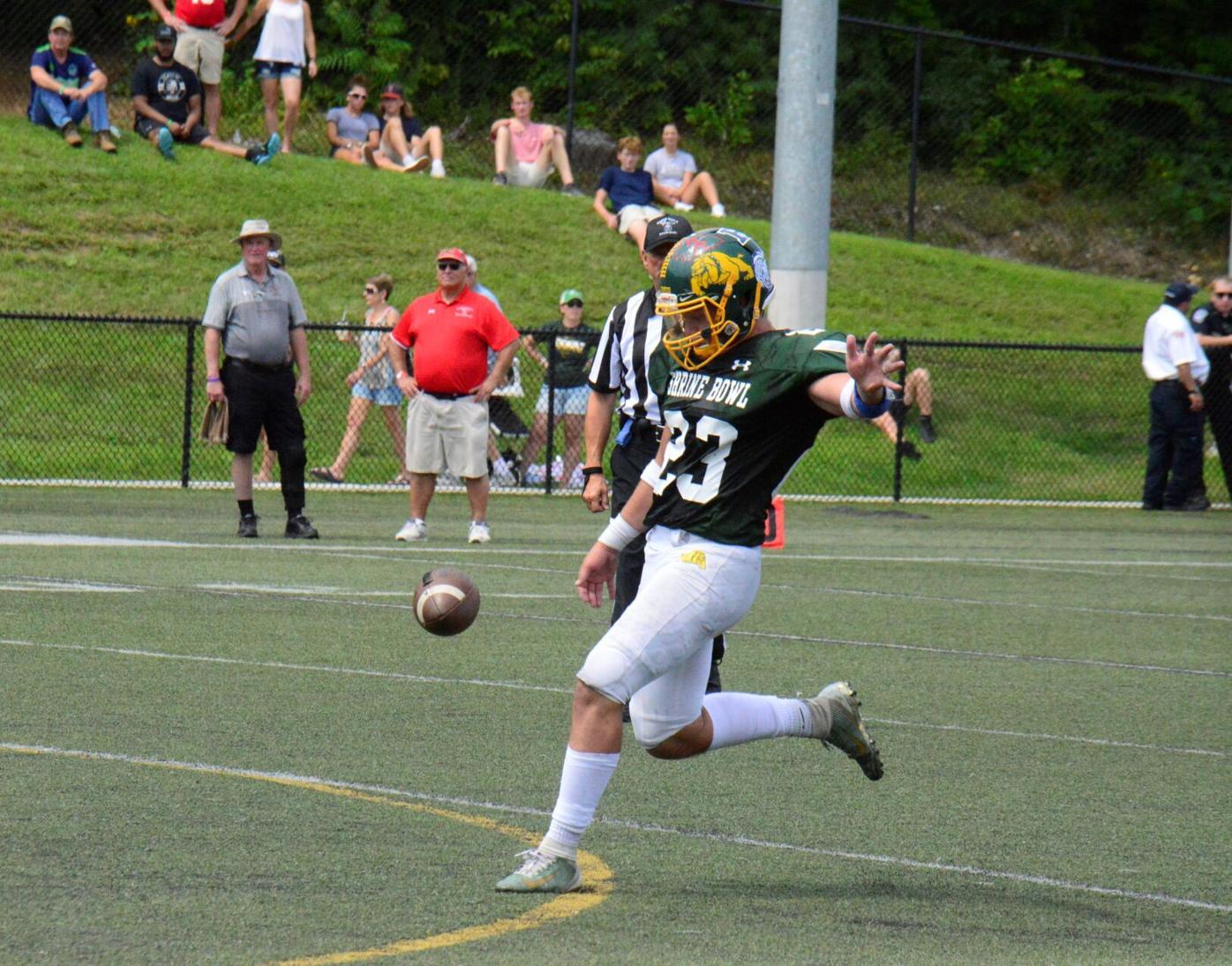 Burr and Burton’s Mark Carthy punts during the first half of the Shrine Bowl on Saturday. 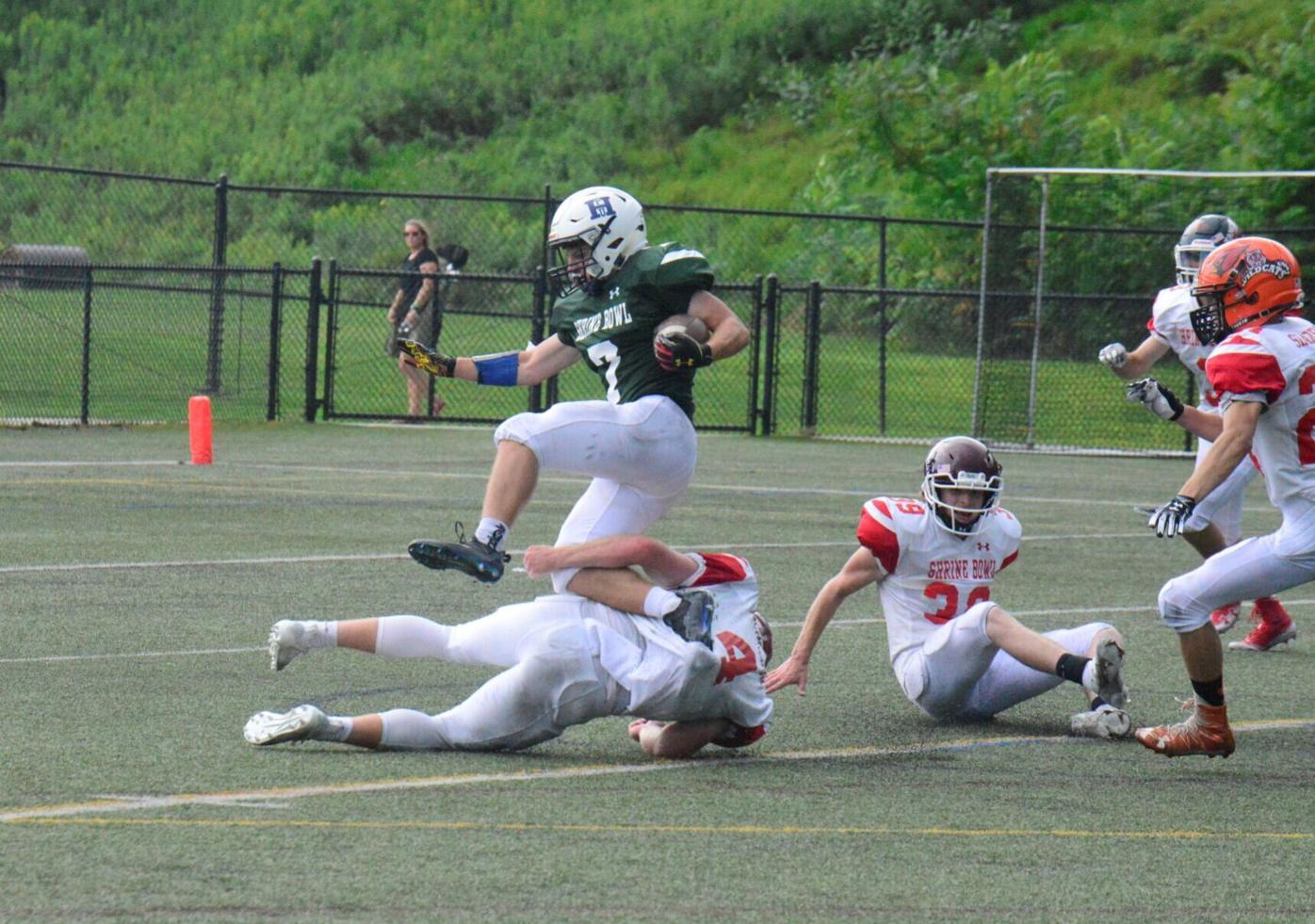 Kohlby Murray spins away from a pair of New Hampshire defenders during Saturday’s Shrine Bowl.

Burr and Burton’s Mark Carthy punts during the first half of the Shrine Bowl on Saturday.

Kohlby Murray spins away from a pair of New Hampshire defenders during Saturday’s Shrine Bowl.

CASTLETON — The Granite State’s solid defense and a commitment to the run game on offense lead them to a 21-0 victory over Vermont in the 68th Shrine Maple Sugar Bowl on Saturday at Castleton University.

A staggering 56 rush attempts compared to just four pass attempts -all incompletions — set the tone that New Hampshire coach Paul Landry had been eluding to in the week of practice leading up to Saturday’s game. New Hampshire wanted to run the ball, and that’s exactly what they did.

Exeter’s Uly Ellis did the most damage out of all New Hampshire backs, turning his 17 touches into 111 yards on the ground, including the games first score with just under five minutes to play in the third quarter.

The first half saw each team jockeying for field position, as neither team even entered the red zone in the first 24 minutes of action. Both defenses held their own all afternoon.

Burr and Burton linebacker Mark Carthy anchored the Vermont defense. The former Bulldog played every single defensive down for Vermont, and found himself around the football all afternoon as New Hampshire went to the run time and time again.

“Our defense killed it out there, I left everything out on the field that I could,” Carthy said.

“It’s the most electric thing I think I’ve ever played in,” Carthy said. “Such a fun time. I feel honored to be able to play in a game like this that I’ve dreamed of since I was a little kid.”

The Granite State didn’t waste any time padding its lead after Ellis’ score. Vermont’s first play the following possession was picked off by New Hampshire defensive back Josh Sharron. Sharron jumped a Bassiru Diawara pass attempt and returned the ball for a 20-yard score. After more than 30 scoreless minutes, New Hampshire put up 14 points within 12 seconds of game clock.

New Hampshire would punch in its final score with less than four minutes to play in the contest as Thomas Johnston found the end zone on a 1-yard run with 3:13 to play, making it a 21-0 ballgame.

Vermont’s offense couldn’t get anything going against the Granite State defense all afternoon. It’s best chance came during the games final possession. Vermont found itself in the red zone for the first time, and were five yards from the goal line with less than a minute to play. Just as it appeared Vermont was about to get on the scoreboard, lightning struck forcing the game to be called with 51.9 seconds left in regulation.

The New Hampshire win makes it two in a row for the Granite State, who also won in 2019’s contest. The 2020 game was cancelled due to the COVID-19 pandemic.

New Hampshire now holds a 49-17-1 record in the all-time series.