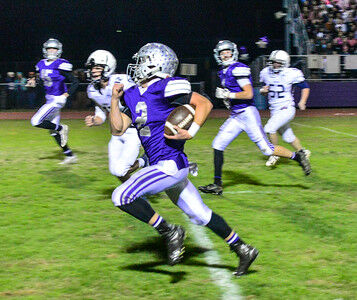 Brattleboro quarterback Tyler Millerick runs the ball 50 yards for a touchdown against Fair Haven during his senior season in 2019. 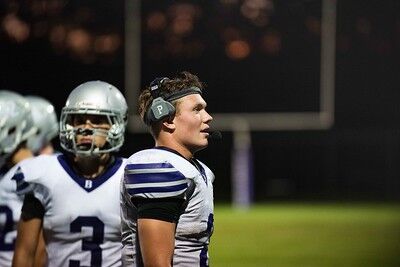 Millerick receives coaching instructions through a headset during a varsity football game in Westminster.

Brattleboro quarterback Tyler Millerick runs the ball 50 yards for a touchdown against Fair Haven during his senior season in 2019.

Millerick receives coaching instructions through a headset during a varsity football game in Westminster.

Freshman quarterback Tyler Millerick will be trying to keep it that way.

“Tyler is a tremendous student-athlete. He has good positive energy in everything he does and always gives great effort,” said Lebeau. “The future is very bright for Tyler. Tyler will continue to develop as a student-athlete and make positive contributions for our program and university as a whole.”

Millerick helped Brattleboro Union High School to an 11-0 record during his senior year, including a victory over Bellows Falls in the Division 2 state championship game. He threw 29 touchdown passes and ran for 21 more during that perfect season.

The son of Chris and Courtney Millerick is one of 10 quarterbacks on the Western New England roster. Alec Coleman and Brendan Smith took turns under center for the Golden Bears in 2019, but they were both seniors at the time.

“Our fall season consisted mostly of lifts and workouts. Our team lifted in the weight room three times per week for the majority of the semester. Our number one goal was to get stronger this fall,” mentioned Lebeau. “We were also able to get on the field a few times a week in small groups in a progression format. It was a great opportunity for young guys like Tyler to learn our systems and understand how we do things here.”

It’s certainly working. The Springfield, Mass. team is 17-5 in Lebeau’s two seasons at the helm, including a seven-game winning streak during year two.

“Our QBs need to be smart and athletic,” said Lebeau. “We look for them to be the point guard of the offense.”

Millerick ran the show on the court and the gridiron while at BUHS.

As a high school senior, he fired four touchdown passes against Spaulding, North Country and rival Mount Anthony Union. During the regular season, he rushed for 100 or more yards six times.