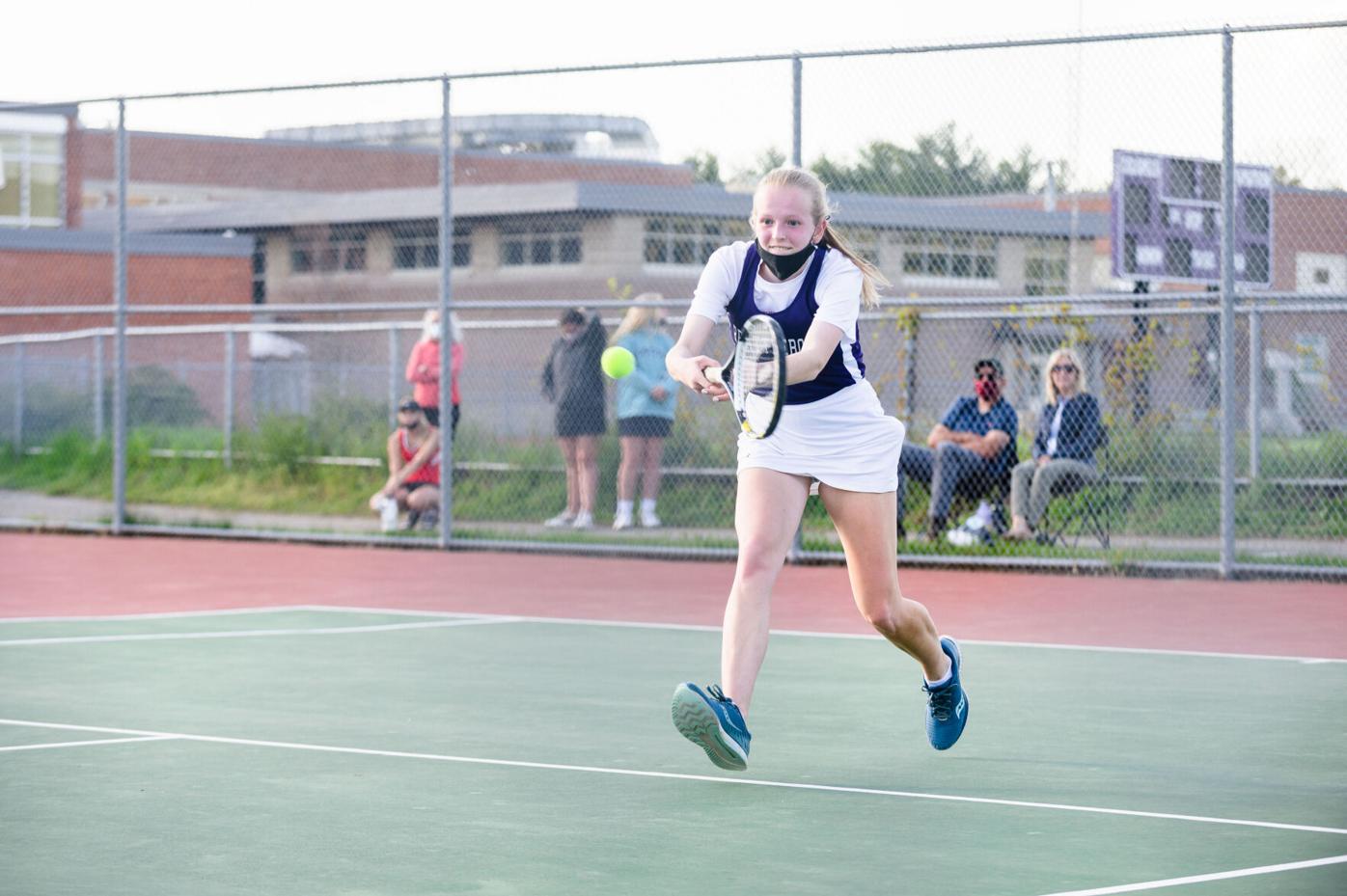 Brattleboro’s Cearra O’Hern, known by her teammates as Fairy Godmother, prepares to hit a backhand shot on Thursday afternoon. 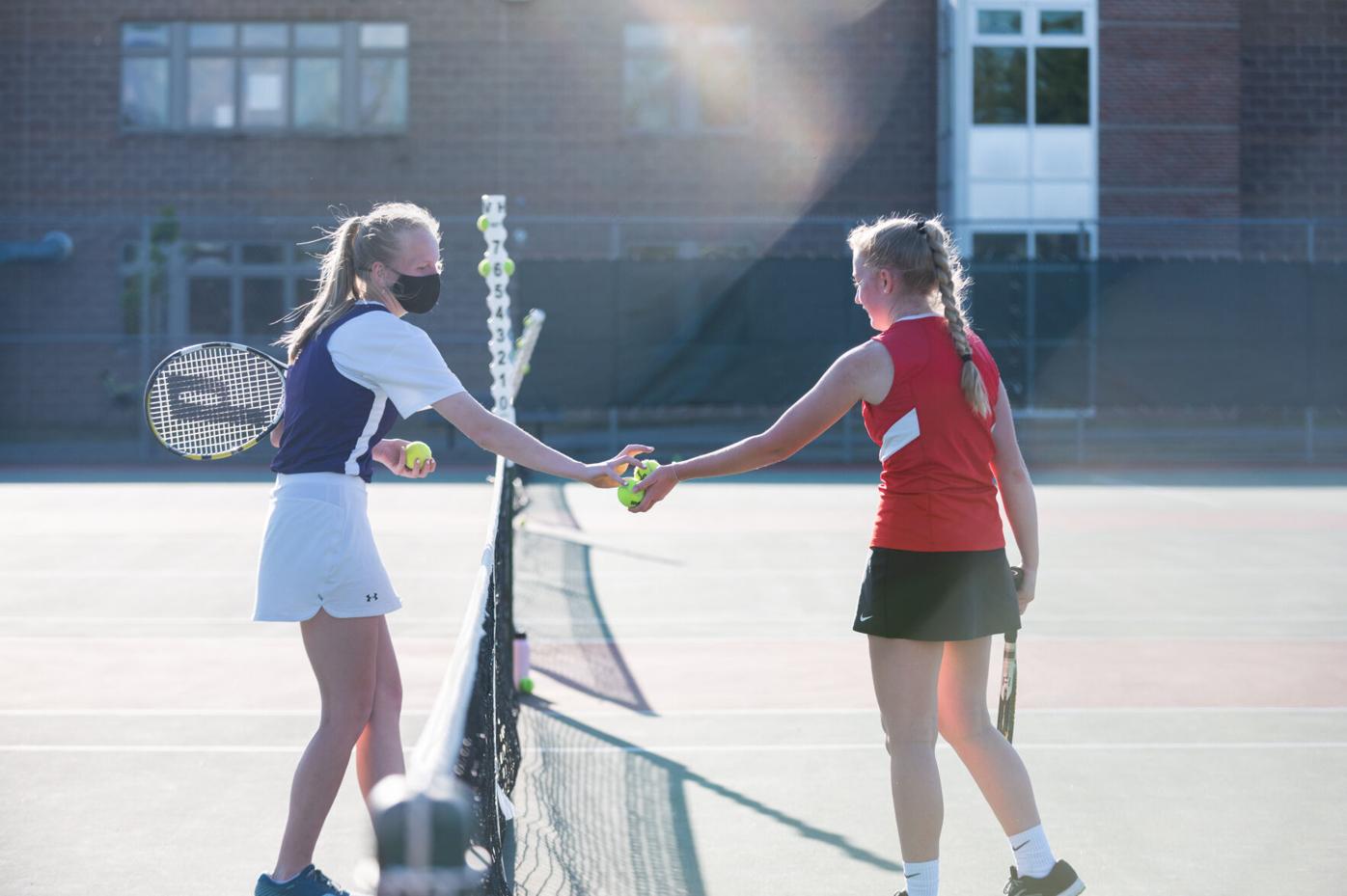 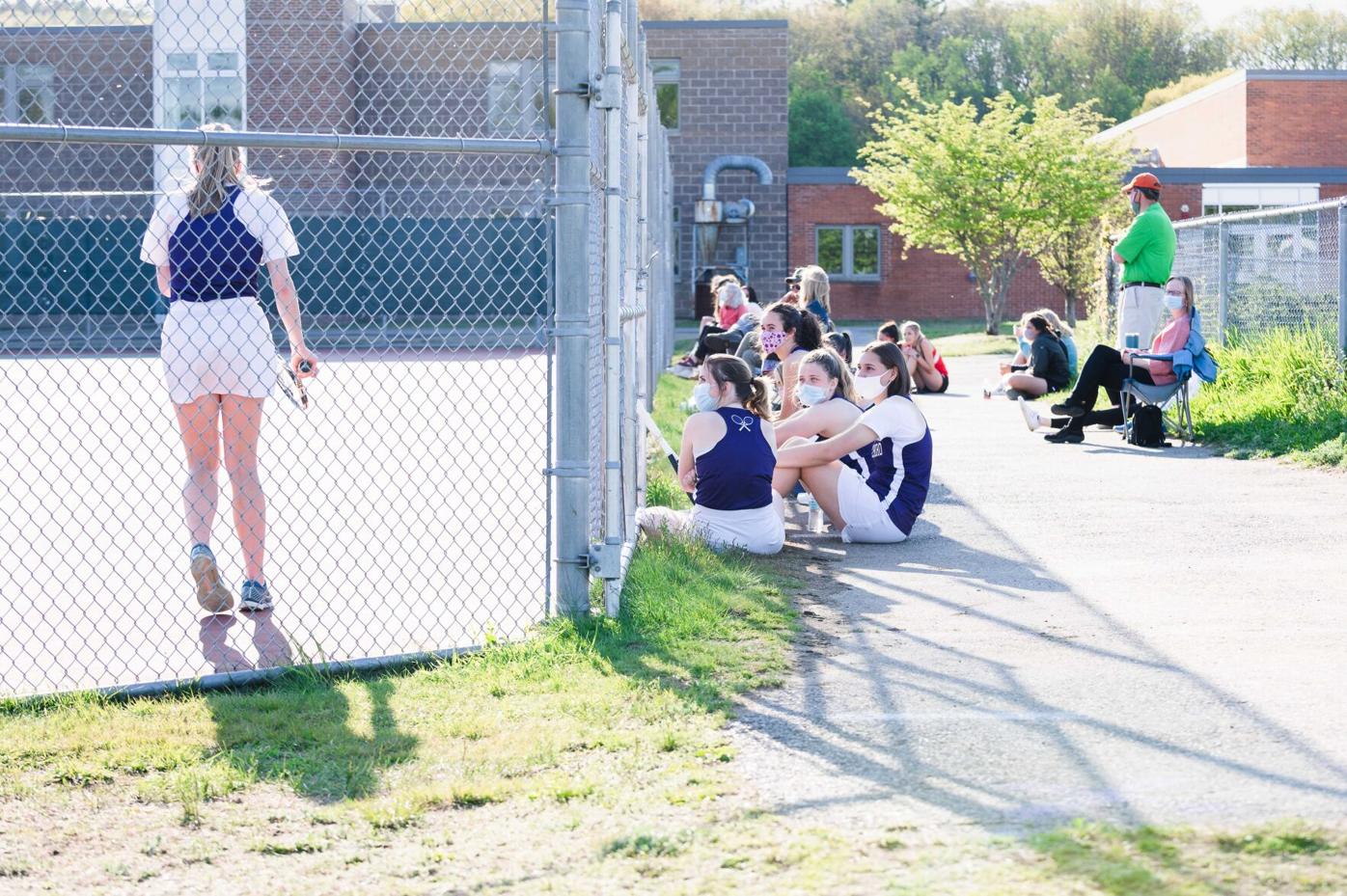 O'Hern is encouraged by her Brattleboro teammates during the No. 3 singles match.

Brattleboro’s Cearra O’Hern, known by her teammates as Fairy Godmother, prepares to hit a backhand shot on Thursday afternoon.

O'Hern is encouraged by her Brattleboro teammates during the No. 3 singles match.

BRATTLEBORO — Known to her teammates as Fairy Godmother, Cearra O’Hern used all of her magical powers during just the second singles match of her varsity tennis career.

The Brattleboro Union High School senior put on a show, with 30 people glued to the only contest still going on a beautiful Thursday afternoon, before finally falling to Rutland’s Olivia Andrews 6-2, 7-6 (7-5) in the third slot.

“She put everything out on that court. You could see her focus and determination,” said BUHS coach Chris Brewer.

The second-set tiebreaker was back and forth action. O’Hern trailed 4-2 and later 5-3 before pulling even at 5-5 thanks to a couple of well-placed shots. Andrews would then put an end to it with consecutive points.

“Right after the match, Cearra asked if she could play her (Andrews) again on Saturday and said that she thinks she could beat her,” Brewer mentioned.

The Colonels, who forfeited one of the doubles matches, lost to Rutland 7-0.

Brattleboro’s Marley Hathaway, AKA Scottie Pippen, is responsible for giving out each player’s nickname. She was defeated by Anna Galippo 6-2, 6-2 at No. 4 singles.

“There you go mom,” she said with a laugh after accidentally hitting the ball over the fence and in her mother’s direction.

Hathaway often made Galippo run side to side. Her deep lobs were on the money. She even crushed one down the line that her foe had no chance at.

At second singles, Lauren Stockwell was downed by Rutland’s Eva Menconi 6-0, 6-2. “Herbacious Tomato Sauce” wowed the crowd with a couple of nice net charges, used a little trickery, and also smashed a forehand down the line.

“Amanda (Rodriguez) has come so far,” the BUHS coach said of his No. 5 singles player known as King Kong, who was defeated by Bethany Solari 6-0, 6-0. “She is extending rallies to five to seven shots every time.”

Shipley kept delivering powerful serves. “Cotton Quilted” responded with some strong returns, continually charged the net and kept her opponent back, and even fooled Shipley with some off-speed stuff.

“She is always up against the best players in the division and in the state. You see her grinding out every point. She is such a fierce competitor with such a fiery side,” explained Brewer, who was exactly like that when he played for the Brattleboro boys.

In the lone doubles match, Caroline Naylor and Maxine Hlavaty fell to the duo of EA Rushing-Arikka Patorti 6-0, 6-2.

“Every day, they come here and work hard,” Brewer said of the players known as Lollipop Smuggler and Distinguished Valedictorian. “Rutland was just able to control the net play in doubles today.”

The BUHS boys tennis players took a break from practice to look on, spectators were sprinkled around the outside of the fence, and O’Hern’s teammates were sitting behind her court during the longest match of the day. “Fairy Godmother” raced to her right during the second set and somehow drove the ball all the way across the court and out of Andrews’ reach.

The senior would then push her talented foe to the limit in the tiebreaker before being nipped 7-5.

The rematch is set for Saturday, when the 1-5 Colonels will visit Rutland.