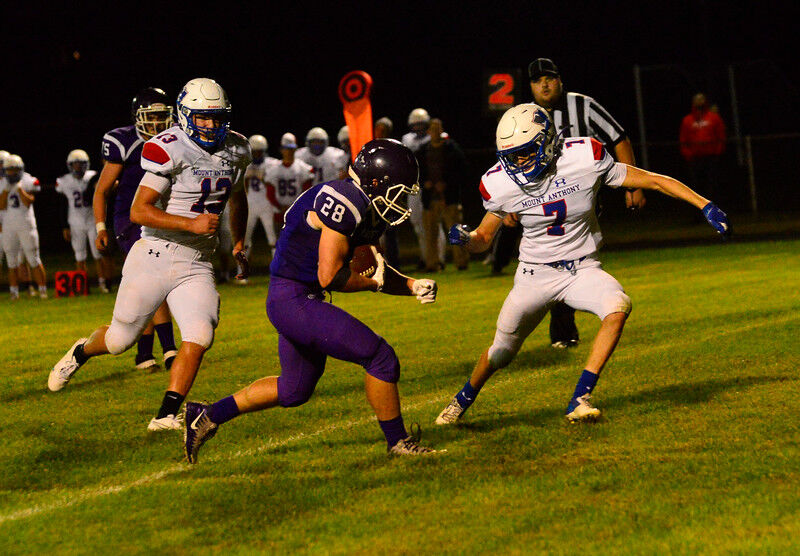 Harrison Gleim runs the ball for the Terriers during a Week 2 victory over MAU. 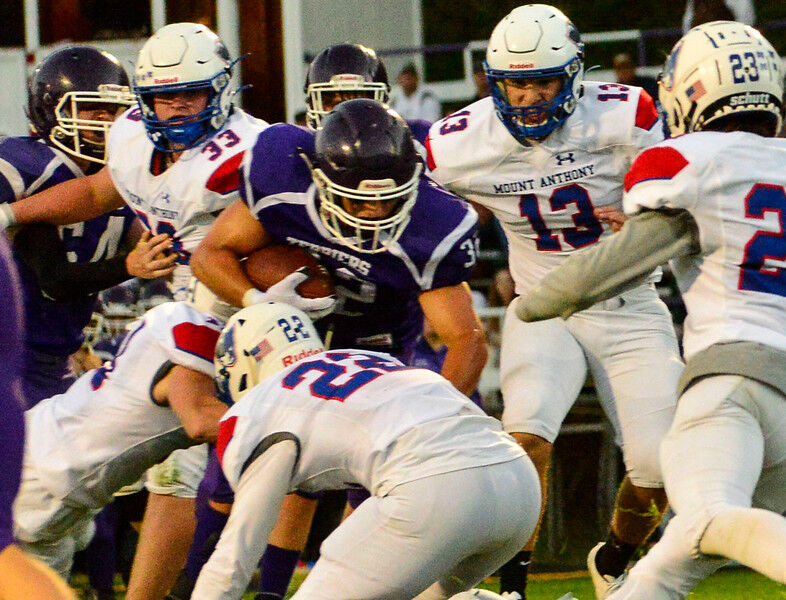 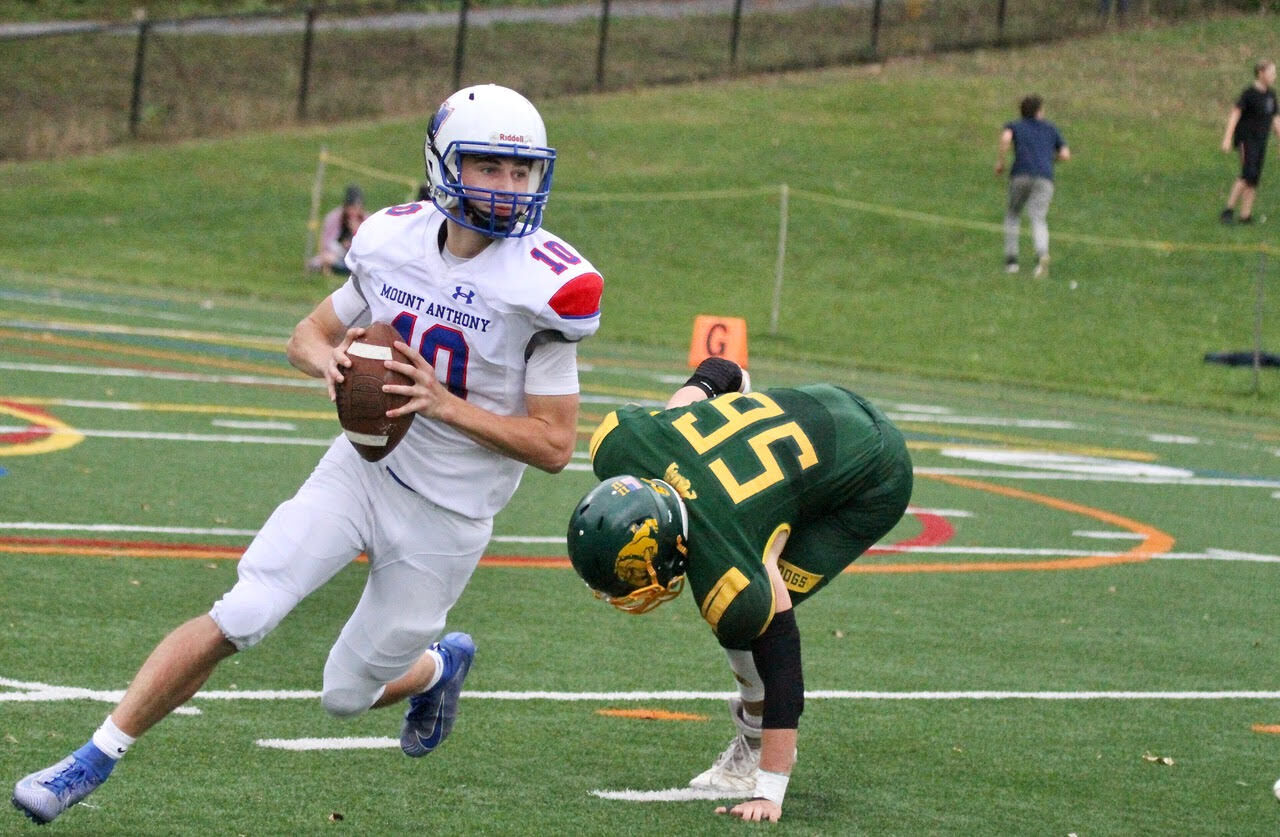 MAU quarterback Tanner Bushee is 70-of-132 for 1,041 yards and 16 touchdowns through the air this season. 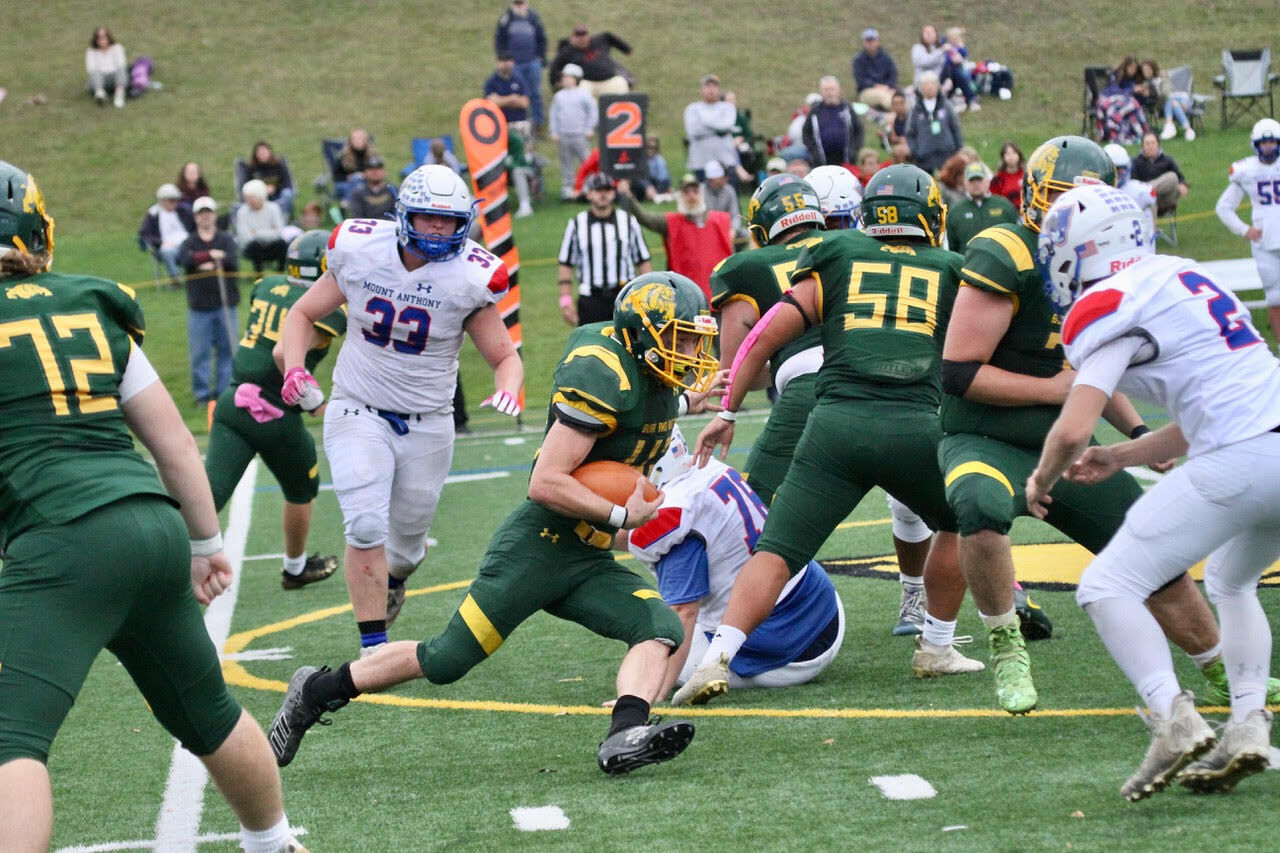 Hayden Gaudette (33) is second on the MAU team with 54 tackles and leads the way with five sacks.

Harrison Gleim runs the ball for the Terriers during a Week 2 victory over MAU.

MAU quarterback Tanner Bushee is 70-of-132 for 1,041 yards and 16 touchdowns through the air this season.

Hayden Gaudette (33) is second on the MAU team with 54 tackles and leads the way with five sacks.

WESTMINSTER — While his mother sold homes this fall, Harrison Gleim and his backfield mates were busy taking the ball to the house.

They ran for 3,500 yards and 61 touchdowns, helping the Bellows Falls varsity football team to a 10-0 record.

“The largest part of our offense is our linemen,” said Gleim. “They don’t have the biggest bodies but definitely have the biggest hearts, and no skill position player would be able to produce numbers that we can without them.”

The top-seeded Terriers will take on No. 2 Mount Anthony Union (8-2) in Saturday’s Division 2 state championship game at Rutland High School at 11 a.m.

“It feels great to be a part of a team that could have a perfect season, but we won’t find out until Saturday afternoon. It’s an unforgettable feeling to be a part of a band of brothers unlike I’ve had before,” said Gleim, who noted that he looks up to and takes advice from his father as well as all of the coaches he’s had along the way.

BF’s first-string defense, which has only given up one touchdown this season, will have to figure out a way to get pressure on MAU’s young star, sophomore quarterback Tanner Bushee.

“I look up to Russell Wilson as my favorite QB but I believe that I play like Marcus Mariota did at Oregon, due to his mobility and ability to throw the ball,” said Bushee, who has 1,041 passing yards and another 356 on the ground for the Patriots this season.

Austin Grogan is the team’s top target with 580 receiving yards. Carter Thompson is next with 309 while big Braedon Billert has 270 yards through the air.

“As far as weapons go, our whole offense has been gelling and putting the ball into the end zone,” said Bushee.

Tailback Ayman Naser and fullback Hayden Gaudette are the team’s leading ball carriers, with 775 and 416 rushing yards respectively. Gaudette, who is considered to be one of the best players in the state, also leads the Patriots in sacks with five and is second in tackles with 54.

“Our passing game has improved since we made the switch at QB, from Billert to Tanner. QB ability wise they are both equally good, but Billert is a good tight end and helps us get the best 11 on the field,” said MAU coach Chad Gordon.

With Billert under center, the Patriots lost to the Terriers 45-14 in Week 2.

“Ball control hurt us last game. I think we had three or four turnovers,” Gordon said. “Ball security will be crucial.”