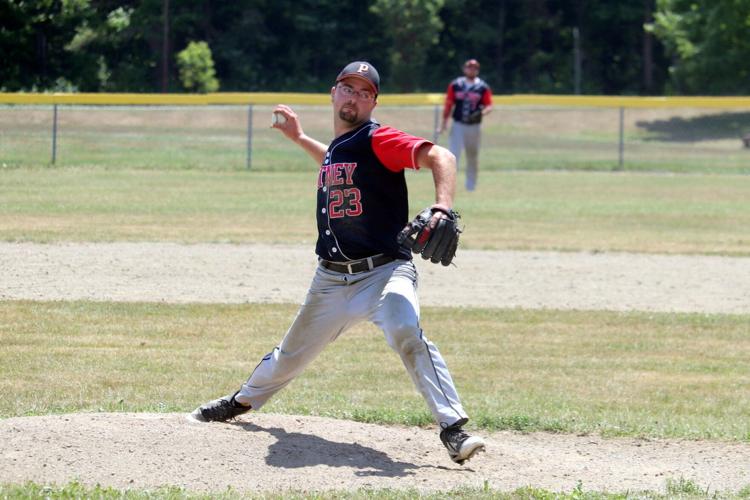 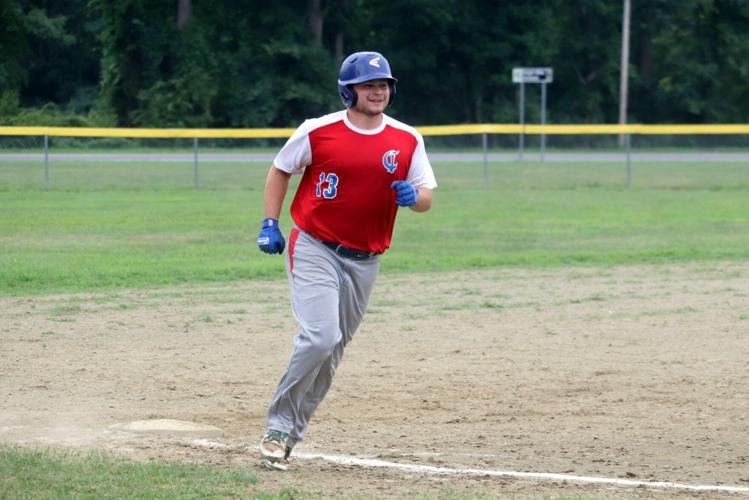 Jake Perkins of the Connecticut River Iron Men rounds third base during his home run trot on Sunday in Dummerston.

Jake Perkins of the Connecticut River Iron Men rounds third base during his home run trot on Sunday in Dummerston.

After three innings, Walpole actually led by a score of 3-1, but the Iron Men exploded for 10 runs in the top of the fourth. Bornholdt led off with a double, Kyle Young followed with a single, then Perkins hit the first dinger of the day. Walpole pitcher Koltin Stetson struck out the next batter, but the next nine Iron Men reached base safely, with St. Pierre and Bornholdt slamming back-to-back home runs — a feat they would accomplish again in the seventh inning.

The afternoon game between Mt. Monadnock and Putney seemed as though it would be a similar affair, when Mt. Monadnock’s leadoff batter, Gavin Motuzas, launched the second pitch he saw from Putney starter Pete Wagner over the center field fence. But Wagner bore down after that, not allowing another run until the ninth inning. He finished the day with a complete-game 4-2 victory, scattering seven hits and walking three while striking out 12.

Hot-hitting Alex Gauthier (2 for 4, double, 2 RBI) and Ryan Lawley (2 for 3, double) led the Putney offense, while Wagner helped his own cause with two line-drive singles and a run scored.

Connecticut River Valley Baseball League (CRVBL) action resumes on June 26 and continues every Sunday, through Aug. 7, with the exception of July 3. Single-elimination playoffs are scheduled for Aug. 14 and Aug. 21. All games take place at Claude Gouin Field at the Dummerston School. Each Sunday, the morning game starts at 10, and the afternoon game starts around 1:15. For more information, including box scores, stats, and the complete 2022 season schedule, visit crvbl.com.