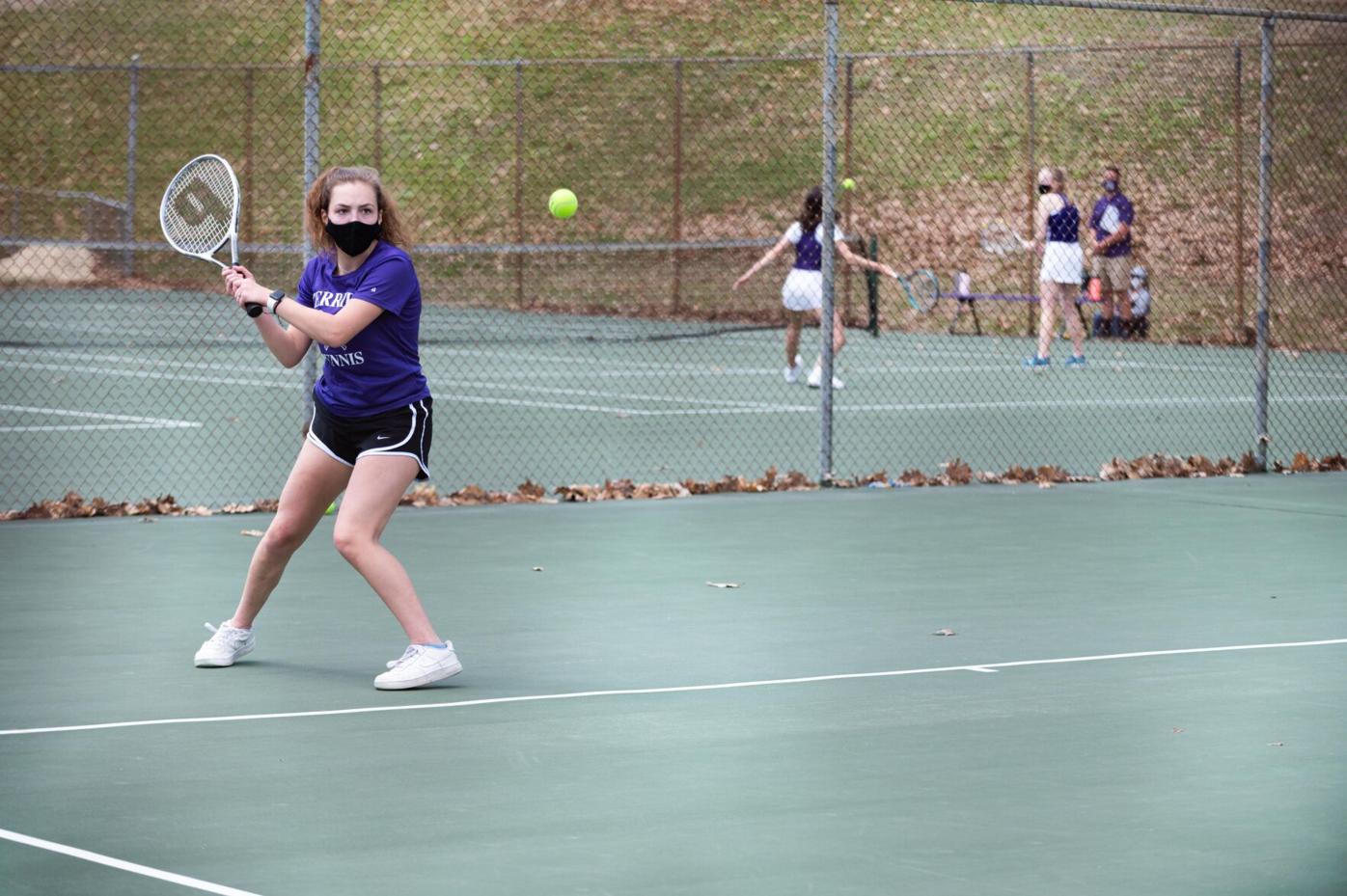 BF’s Haley McAllister readies for a return during Saturday’s tennis match against Brattleboro in Westminster. 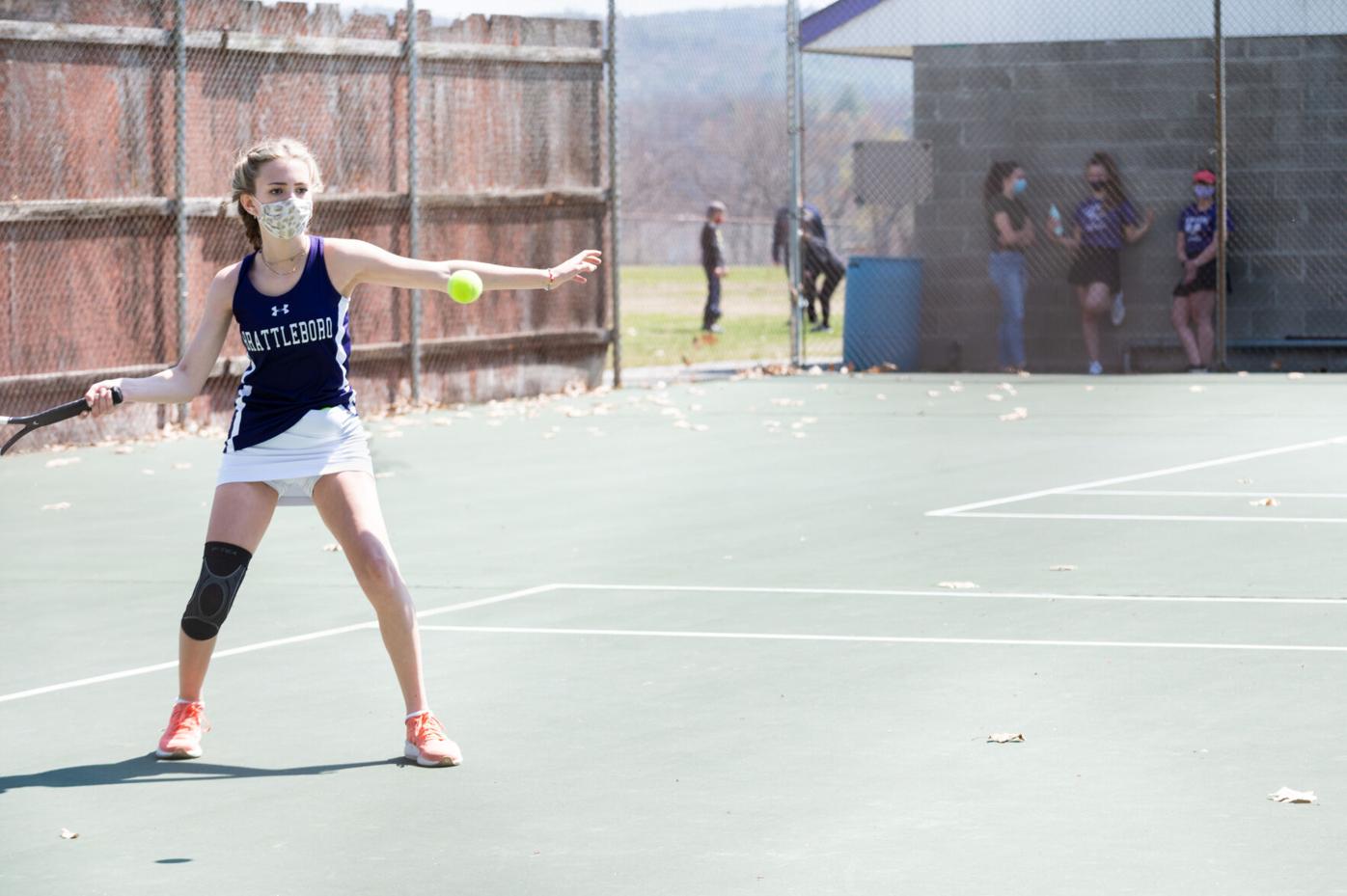 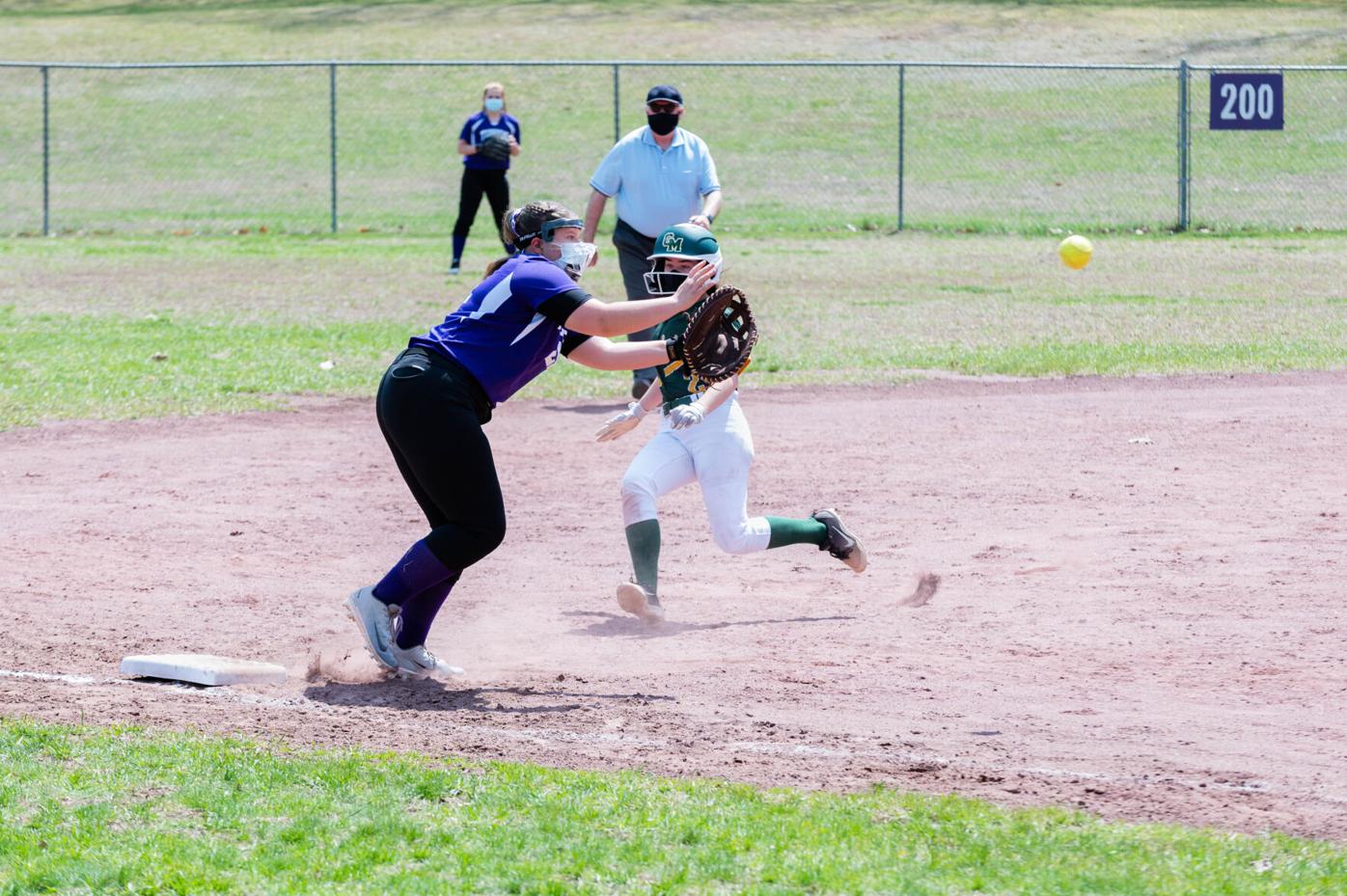 Abby Joslyn makes a play at third base for the Terriers.

BF’s Haley McAllister readies for a return during Saturday’s tennis match against Brattleboro in Westminster.

Abby Joslyn makes a play at third base for the Terriers.

“It was extremely competitive and evenly matched the entire day. The match lasted almost four hours with four matches going the distance to a third set tiebreak,” mentioned BUHS coach Chris Brewer. “This was our first match opportunity this year and I couldn’t have been more excited for this group. After being away from competitive play during COVID-19 for so long and a majority of the team having very limited match experience, the team really came into their own and showed a great level of ability on the courts. I am excited to see what we can do the rest of the season.”

Clara Seymour won 6-3, 6-4 at No. 2 singles for the Colonels. Brattleboro’s Lauren Stockwell and Maxine Hlavaty prevailed by the same exact score at second doubles.

Alina Secrest sprinted to victory in the 100 and 200, also helping the BUHS girls capture the 4x100 and 4x400 relay races. Ava Whitney (400 and long jump) and Fiona Kidder (100 hurdles and 300 hurdles) each won two events for the Colonels, who also got wins from Sylvie Normandeau (800), Katherine Normandeau (1500) and Montana Frehsee (shot put).

Brattleboro’s Finn LaMorder prevailed in the 100 and helped a couple of relay teams to victory while teammate Magnus vonKrusenstiern took the 400 and 800 along with being a member of the gold-medal winning 4x400 foursome. Tenzin Mathes added a win in the 1500. Nolan Holmes was fastest in the 3000.

Elijah Ghia won the 800 and 1500 and was part of BF’s winning 4x400 relay team (along with Owen LaRoss, Mack Ross, Devon Porier). LaRoss also prevailed in the shot put and discus, and Tylar Stanley took the 300 hurdles.

Harrison Gleim added seconds in the javelin, 100 and triple jump for the hosts.

BRATTLEBORO — Brianna Paul scored five goals and Ally Foard added one of her own as Brattleboro fell to Champlain Valley Union 19-6 in Saturday’s home opener.

“CVU is a very experienced team and we knew it would be a hard fight. Given how lean and young our team is, I thought the girls played well. We have adjustments to make in terms of cutting in the attacking zone and better communication on defense, but I am continually impressed by how hard our girls work. They always play with a ton of heart,” noted first-year BUHS coach Sarah Armour-Jones.

The Colonels (0-3) were coming off of a 12-7 loss to St. Johnsbury on Friday. Paul netted five goals, while Willow Romo and Juliana Miskovich added one tally each. Abbey Squiers finished with 10 saves.

“The girls played very well against St. Johnsbury, which is always a really strong team. We had many more shots on goal than our first game, defense played much more cohesively and the team worked together really nicely,” the BUHS coach stated.

“We showed a lot of fight and toughness Friday night. We did everything we were supposed to and got our first win of the season. Was nice to score some runs after being in every game in the previous three. Now we need to build off of the victory and continue to improve,” said winning coach Sam Kilelee. “I thought our pitchers threw very well again. We have had very solid pitching so far this season and it continued on Friday night with Brayden Eastman and Aidan Davis.”

Davis started the game off with a double and Dan Tetreault followed with a triple as the Pacers took an early 2-0 lead. The teams were tied at 5-5 and later 7-7 before Lindsell became the hero.

Leland & Gray swept a doubleheader at Proctor on Saturday, winning those games 8-4 and then 15-6. Pitchers Kristian Pierson (7 Ks) and Parker Richardson picked up the victories.

Riley Barton and Ethan Cutts rapped out three hits apiece in the opener, while Dylan Greenwood had two of his own. Pierson, Richardson and Cutts strung together consecutive singles in the third inning of the sequel to help the Rebels rally from a 4-1 deficit.

The Hinsdale varsity softball team lost to Wilton 8-7 on Friday.

Aleah Owen had four hits and two RBI to lead the 1-3 Lady Pacers offensively. Addy Nardolillo finished with two hits and one run driven in.

In other action, Bellows Falls fell to Green Mountain 15-10. Taryn Darrell went 3-for-5 at the plate and also drove in a pair of runs to pace the Terriers.