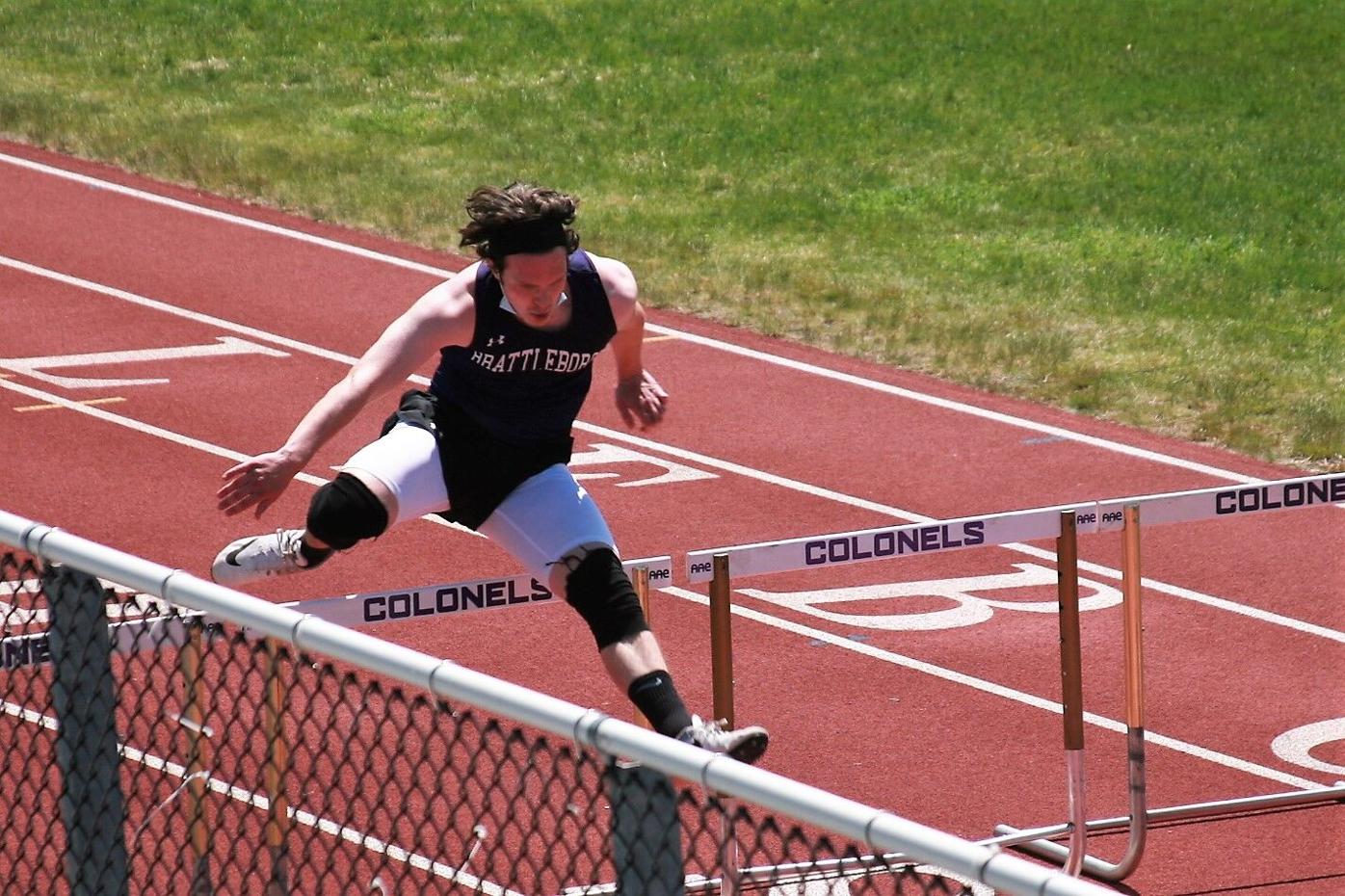 Brattleboro’s Alexander Shriver placed ninth in the 300 hurdles at the Essex Invitational on Saturday. 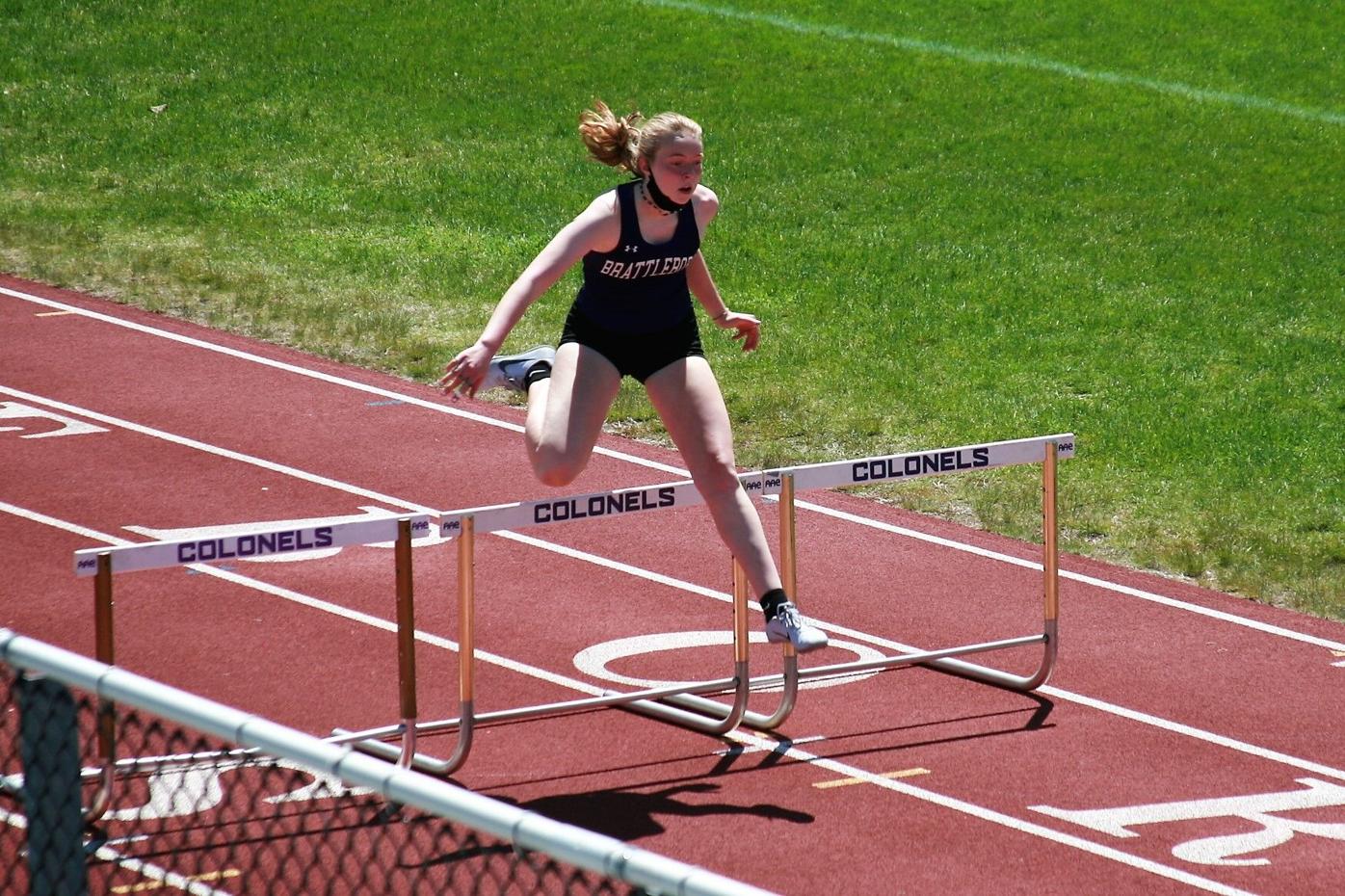 Brattleboro’s Fiona Kidder took 14th in the 100 hurdles in Essex.

Brattleboro’s Alexander Shriver placed ninth in the 300 hurdles at the Essex Invitational on Saturday.

Brattleboro’s Fiona Kidder took 14th in the 100 hurdles in Essex.

ESSEX — Sylvie Normandeau tied for fifth in the pole vault by clearing 2.30 meters to lead Brattleboro Union High School at the Essex Track and Field Invitational on Saturday.

Also competing for the BUHS girls were: Genevieve Redmond (12th in high jump and 21st in triple jump), Fiona Kidder (14th in 100 hurdles) and Addison DeVault (15th in pole vault).

Finn LaMorder finished eighth in the long jump to pace the Brattleboro boys. Alexander Shriver added a ninth in the 300 hurdles.

Leah Madore threw a one-hit shutout to pick up the win. She struck out 10 and walked zero.

“Leah’s pitches were working really well today. She had complete control of the game and did a great job changing up her pitches,” stated winning coach Kelly Markol.

Logan Austin went 2-for-3 with a double and four RBI to lead the Brattleboro attack. Aliza Speno was 1-for-2 with an RBI, Alexa Kinley was 1-for-1, drawing three walks and scoring four runs. Brittney Wright also added a hit for the 9-4 Colonels.

It was the final regular season contest for seniors Natalie Hendricks, Nina Belliveau and Kinley.

BRATTLEBORO — The Colonels were nipped by Woodstock 7-6 on Saturday.

“Despite Saturday’s really awful weather, we celebrated our seniors and had a great matchup against Woodstock. We came out slowly in the first half, regrouped at halftime, and scored five of our six goals in the second half. It ended up being really close and a great game,” stated BUHS coach Sarah Armour-Jones. “Despite our record this team has been amazing — they have worked so hard, developed their skills and kept a great attitude. As a coach you can’t ask for more.”

Paul and Romo each had four tallies when Brattleboro fell to rival MAU on Tuesday. Miskovich added two goals and Mikijaniec also scored.

BRATTLEBORO — Aden McMahon went off for five goals during Brattleboro’s 7-6 loss to MAU on Friday night. The Patriots had won the previous two meetings, 14-0 and 18-3.

“We’ve said all along that these kids work hard and this effort shows that. We had the opportunity to compete for four quarters and that’s what it’s all about. This was a great game for this team to have,’’ said Brattleboro coach Chris Sawyer, whose team honored seniors Trevor Thibault, Anthony Franceschetti, Elias Isham and Spencer Lawrence prior to the contest.

Thibault had one goal for the purple and white, while Alex Baker finished with four assists. Defenders Lawrence, Elias Isham, Josh Curtis, Brett Parsons and Django Grace were solid all night in front of goalie Thad Sawyer, who had an outstanding night between the pipes, finishing with 23 saves.