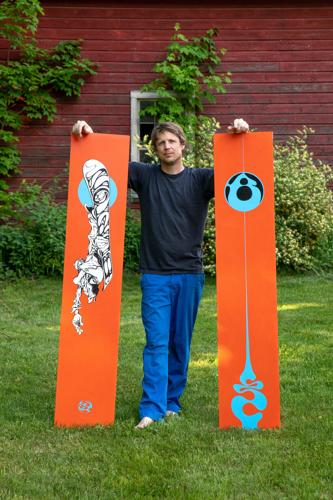 Scott Lenhardt has designed graphics for about 60 snowboards for Burton Snowboards. 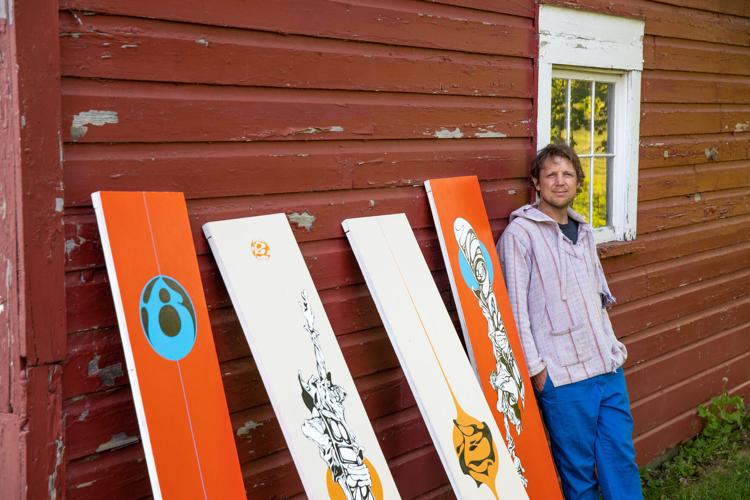 Scott Lenhardt's work is on display until October at the Vermont Ski and Snowboard Museum in Stowe.

Scott Lenhardt has designed graphics for about 60 snowboards for Burton Snowboards.

Scott Lenhardt's work is on display until October at the Vermont Ski and Snowboard Museum in Stowe.

At the virtual Red Bench Speaker Series hosted Thursday by the Vermont Ski and Snowboard Museum in Stowe, where an exhibit featuring his work will be on display until October, Lenhardt described being “stoked” when he was first offered an opportunity to work on Burton board graphics. He also contributed graphics that went in the company’s catalogs and on its billboards.

“I always felt like making things by hand,” he said, using painting and paper as mediums. “More than the finished product, the making of it felt good to me.”

Regardless of the technology available, he still choose to work by hand.

Sometimes, Lenhardt would show art directors an idea he developed. Other times, they would present one to him.

Pro board models he has designed include those for local Olympian Ross Powers, along with Shannon Dunn, Craig Kelly and Danny Davis. Lenhardt also has worked with Adidas, Mountain Dew and Nike on projects.

Chris Copley, who moderated the discussion and worked as a pro team manager for Burton and announcer for the U.S. Open at Stratton, recommends anyone with an interest check out the exhibit featuring Lenhardt’s art.

“For fans of Phish, wait ‘til you see the work he’s done for Phish,” Copley said. “His art is just really diverse. So what you’re going to see is the way his work translates to really great art on snowboards.”

Lenhardt recounted growing up a half hour away from Manchester in West Rupert. His home mountain was Bromley Mountain, where he once worked in the rental department, getting guests into ski boots.

The following season, he decided not to work at the resort and “just ride.” He and a friend would film each other and find inspiration from other riders who were going so much bigger and having a fun time.

“That camera changed my life,” he said, noting that it is on display in the exhibit.

“Word got out and people were reaching out once in a while,” he said, “and I just realized I made a lot of art for different things but with these pet portraits, I knew exactly where it’s going. It’s going into the hands of people who love these creatures.”

Lenhardt got the chance to hang out with Phish frontman Trey Anastasio when he designed the cover for the musician’s entirely orchestral album “Seis De Mayo.” The art features Anastasio in his barn with his guitar and effect pedals.

As a guitarist himself, Lenhardt likes to think about the specific audience when it comes to both artwork and music.

“I make up people to think about when I’m doing it,” he said of his art.

He also takes a snooze now and then to help stir up inspiration.

“I take naps because I think, in between being asleep and awake, I just get good ideas,” he said.