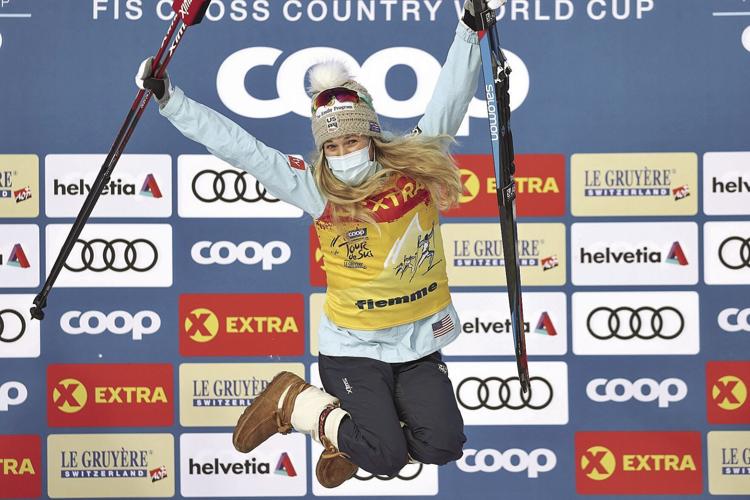 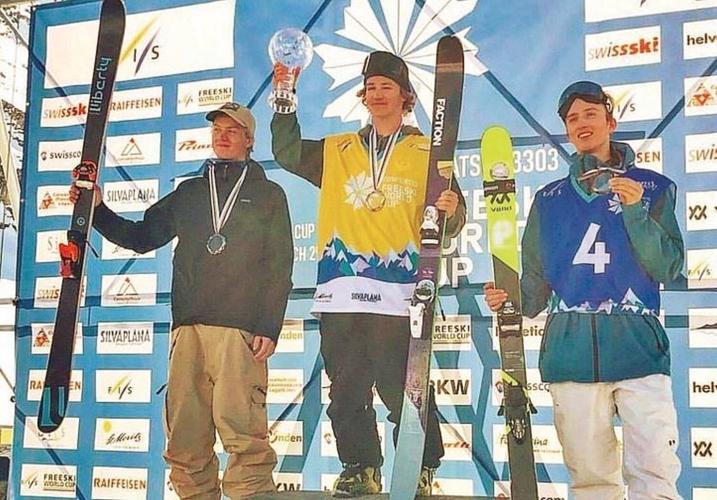 Mac Forehand (center) stands atop the podium after winning the 2019 Crystal Globe at the final World Cup event of the season in Switzerland. Forehand, a Stratton Mountain alumnus, will compete for Team USA in the 2022 Beijing Games.

Mac Forehand (center) stands atop the podium after winning the 2019 Crystal Globe at the final World Cup event of the season in Switzerland. Forehand, a Stratton Mountain alumnus, will compete for Team USA in the 2022 Beijing Games.

The 2022 Winter Olympics are set to begin in Beijing on Feb. 4. Jessie Diggins headlines the list of Southern Vermonters looking to lead Team USA to gold.

She trailed Sweden’s Stina Nilsson — who won gold in the individual sprint eight days prior — heading into the final turn.

Diggins gained ground as the finish line neared, much to the delight of NBC commentator Chad Salmela on the TV broadcast. As Diggins closed the gap, Salmela cried out, ‘Here comes Diggins!’ adding to the drama of the moment. And then Diggins lunged with her skis to the finish line, crossing a fraction of a second — .19 of a second to be exact — before Nilsson to clinch the gold in one of the more dramatic finishes in Olympic history.

It will be difficult to follow up that performance, but that’s what Diggins looks to do in Beijing. She’s now one of the veterans for Team USA’s cross-country ski team. Fellow Southern Vermonter Sophie Caldwell Hamilton, of Peru, held that title until her retirement from the sport last year.

Diggins is one of four Team USA cross-country skiers with prior Olympic experience heading to the 2022 Games. Rosie Brennan, Caitlin Scott and Scott Patterson all also competed in the 2018 Games.

The remaining 10 members selected to the USA cross-country ski team will compete in their first Olympics, including two with Southern Vermont ties.

Landgrove native and University of Vermont student-athlete Ben Ogden is excited to represent his country on the world’s biggest stage.

“I’m really excited to be named to the Olympic team,” Ogden told U.S. Ski & Snowboard. “Growing up in Southern Vermont, I have been inspired by Olympians my whole life and becoming one myself has always been a dream. I am excited to race hard and have some fun in China.”

“I am very excited to be named to the Olympic team; it is a dream come true,” Kern told U.S. Ski & Snowboard. “I believe the team we are bringing is really strong and will do great things at the Olympics.”

Mac Forehand is the most recent SMS grad (2020) to be named to team USA. He will compete in the ski slopestyle and Big Air events.

Lindsey Jacobellis, a 2003 SMS grad, hopes to reach the podium for the second time in her Olympic career. The snowboarder earned a silver medal in the women’s snowboardcross at the 2006 Turin Games.

Jacobellis has been a staple in the snowboarding community over the past two decades. 2022 will mark her fifth Olympic appearance, making her tied for the most experienced Team USA Olympian heading to Beijing. Curler John Shuster, skeleton slider Katie Uhlaender and snowboarding icon Shaun White will also compete in their fifth Games in February.

Southern Vermont will once again play a part in how successful Team USA is in the Winter Games.

Even more athletes with ties to the Green Mountain State are set to compete in this year’s Olympics. Mikaela Shiffrin — a two-time gold medal winner — highlights the list. The alpine skier attended Burke Mountain Academy.