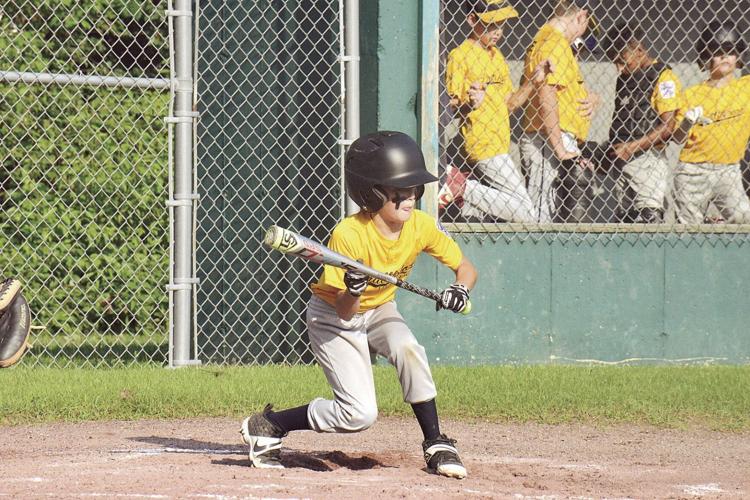 A Brattleboro batter prepares to bunt. 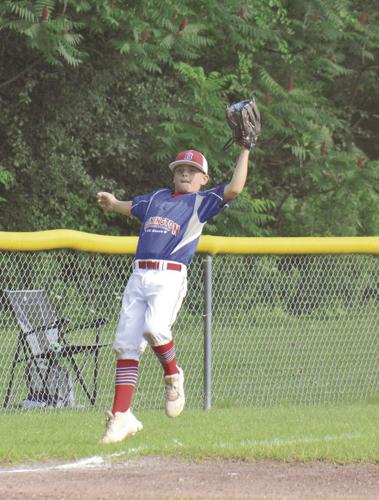 Bennington's Sawyer Tatro makes a leaping catch at third base. 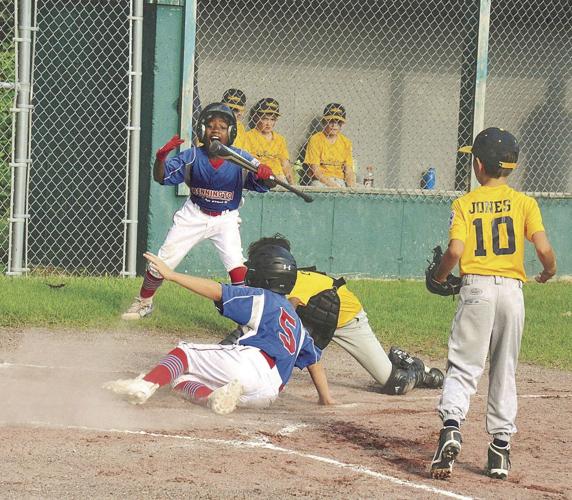 A Brattleboro batter prepares to bunt.

Bennington's Sawyer Tatro makes a leaping catch at third base.

BENNINGTON - The first two games between Bennington 10u all stars and Brattleboro featured both teams reaching the double digit mark in runs, with Brattleboro taking the first game 14-13 and Bennington evening the series with a 14-12 victory in game two.

Bennington starter Ben Burnell made sure things went differently for his team on Thursday afternoon.

The right-hander struck out the side in the top of the first, and the quick half inning gave the Bennington Little Leaguers confidence. They parlayed that momentum into a 13-3 victory in five innings of play.

Bennington’s bats showed patience in the bottom half of the first, drawing six walks and advancing on wild pitches. Nolan Sherman had the big hit of the inning, a single to left field that drove in two runs. By the time Brattleboro got out of the inning, Bennington plated six runs and took a commanding lead.

Brattleboro had just one batter reach base in the first two innings, on a walk, as Burnell continued dealing. Burnell lasted two and two thirds innings and did not allow a hit, while walking three and striking out seven batters. He did allow two runs, one earned, as Brattleboro’s Dominic McKay scored from third on a wild pitch after drawing a walk in the top of the third.

Addison Dwyer came on in relief, finishing out the final two and a third innings for Bennington. With an inherited runner on first base and two outs, Brattleboro’s Azyi Crews slapped a triple down the third base line, plating Brattleboro’s second run of the game and making it a 9-2 contest.

Crews would come around to score by stealing home plate on a successful double steal, bringing it to 9-3 as the top of the third concluded.

Dwyer settled in during his final two innings on the mound, not allowing a run. He looked especially good in the fifth, where he surrendered the Brattleboro bats in order.

“Addy’s probably one of my more consistent throwers. He throws strikes,” Burnell said.

The home team had a great opportunity to end the game in the bottom of the fourth. After plating three runs to make it a 12-3 ballgame, Bennington needed one last run to reach the 10-run mercy rule and end the game. With two outs and runners on second and third, Brattleboro coaches decided to intentionally walk number two hitter Kullen O’Donnell.

Burnell, next to bat, got the count to three balls and no strikes. The third pitch got past Brattleboro’s catcher and made its way to the backstop. The Bennington runner on third tried his luck, but Crews, Brattleboro’s catcher, recovered quickly and tagged the runner before making it home.

Bennington kept their heads up, and they scored the one run needed to end things the following inning.

Burnell drew a leadoff walk in the fifth, and advanced two bags on a couple wild pitches. Sawyer Tatro dug in for his at bat, and hit a liner to the right side of the infield, past Brattleboro’s second baseman for the walk-off single.

“He did great. We talked to him before and said ‘hey look if Ben gets on, we really need you to come up big,’” Burnell said. “Kid did great today, he really stepped up his game.”

Bennington takes a 2-1 series lead in the best of five against Brattleboro. They will look to close out the series during Saturday’s 1 p.m. contest in Brattleboro.