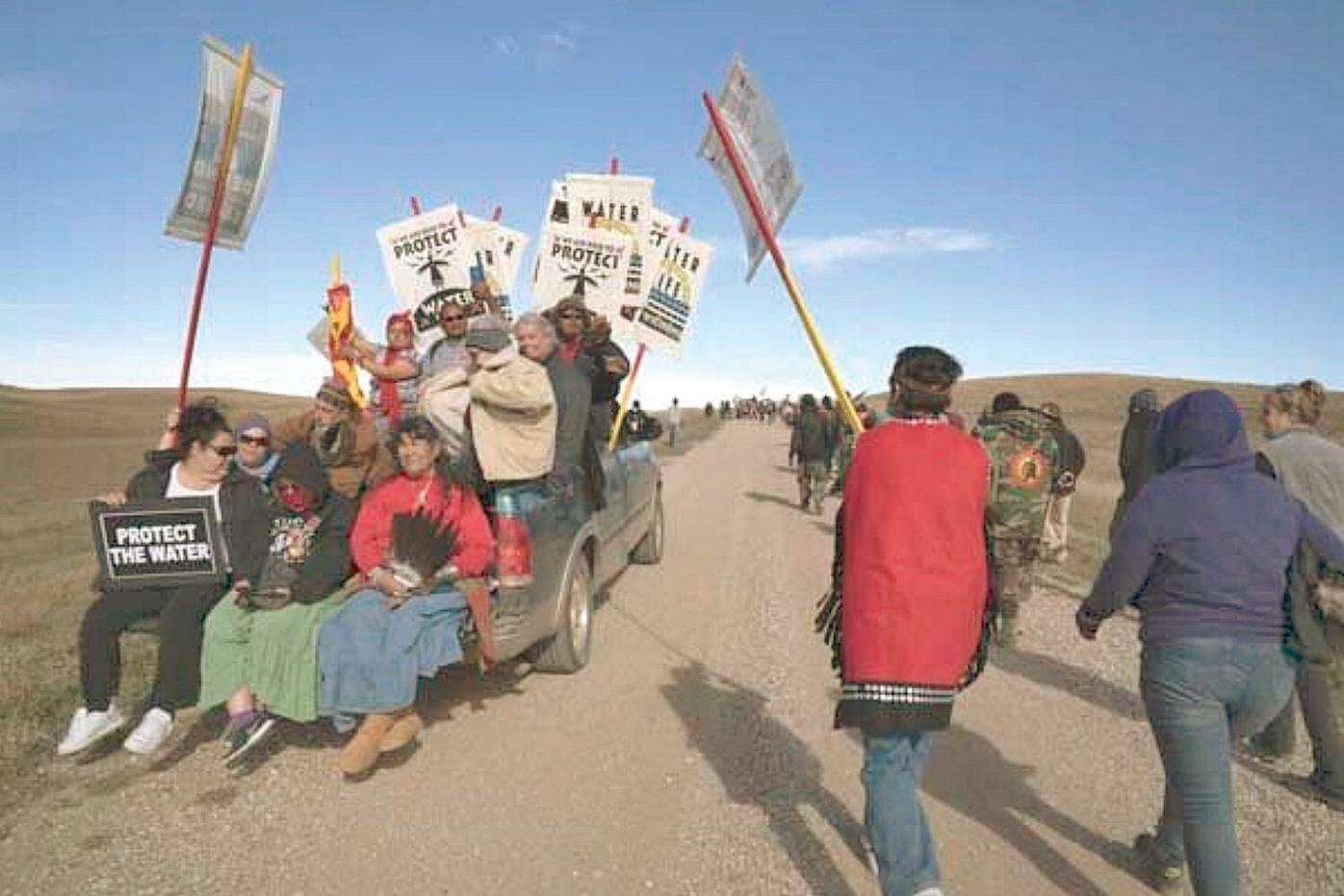 An impromptu road block was set up to protect North Camp from a perceived threat by a law-enforcement caravan coming south from Bismarck, North Dakota in this photo by Marlboro College professor John Willis at the Standing Rock Reservation. 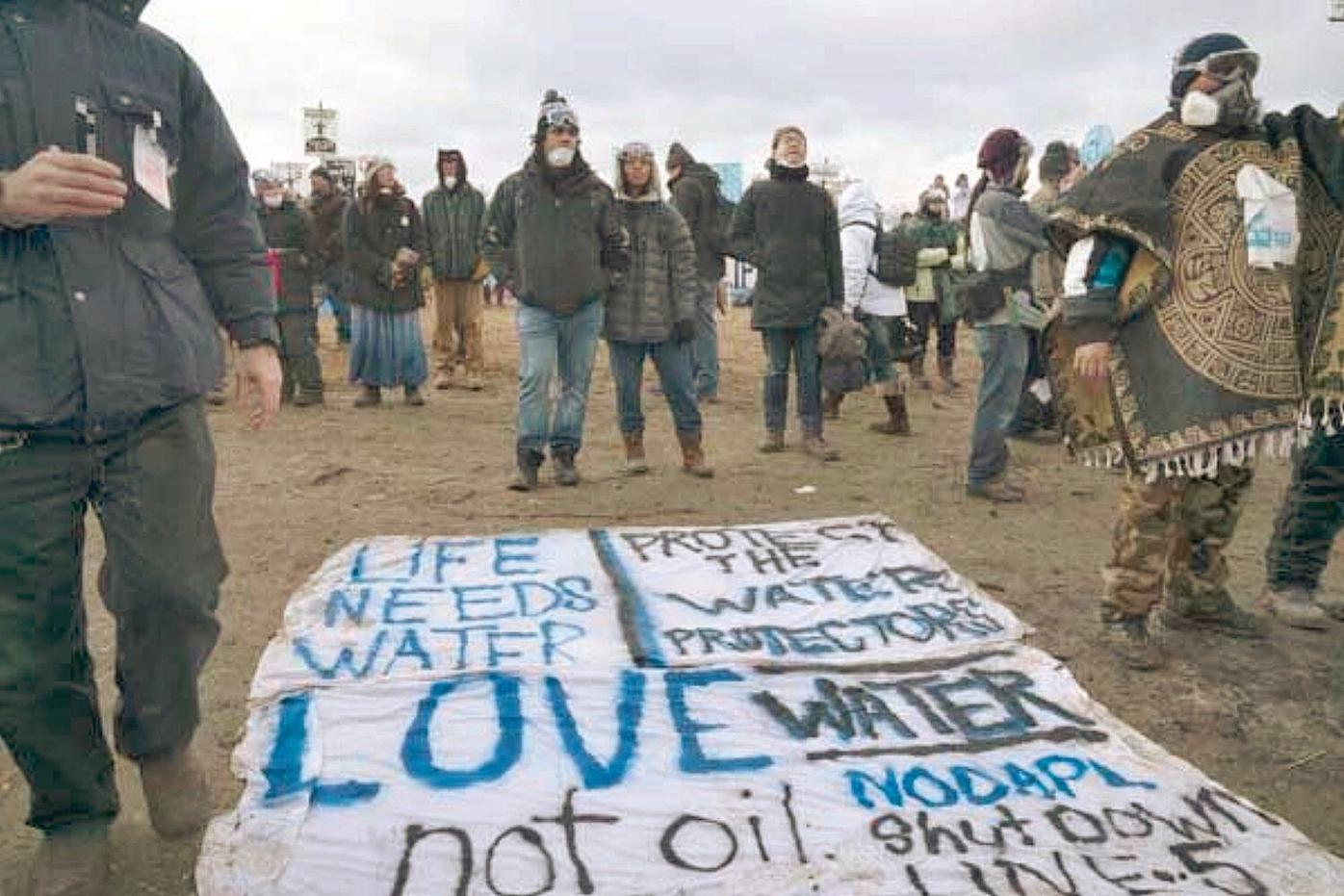 A Thanksgiving Day action near the site where Dakota Access Pipeline would be placed beneath the Missouri River adjacent to sovereign Standing Rock Lakota land. 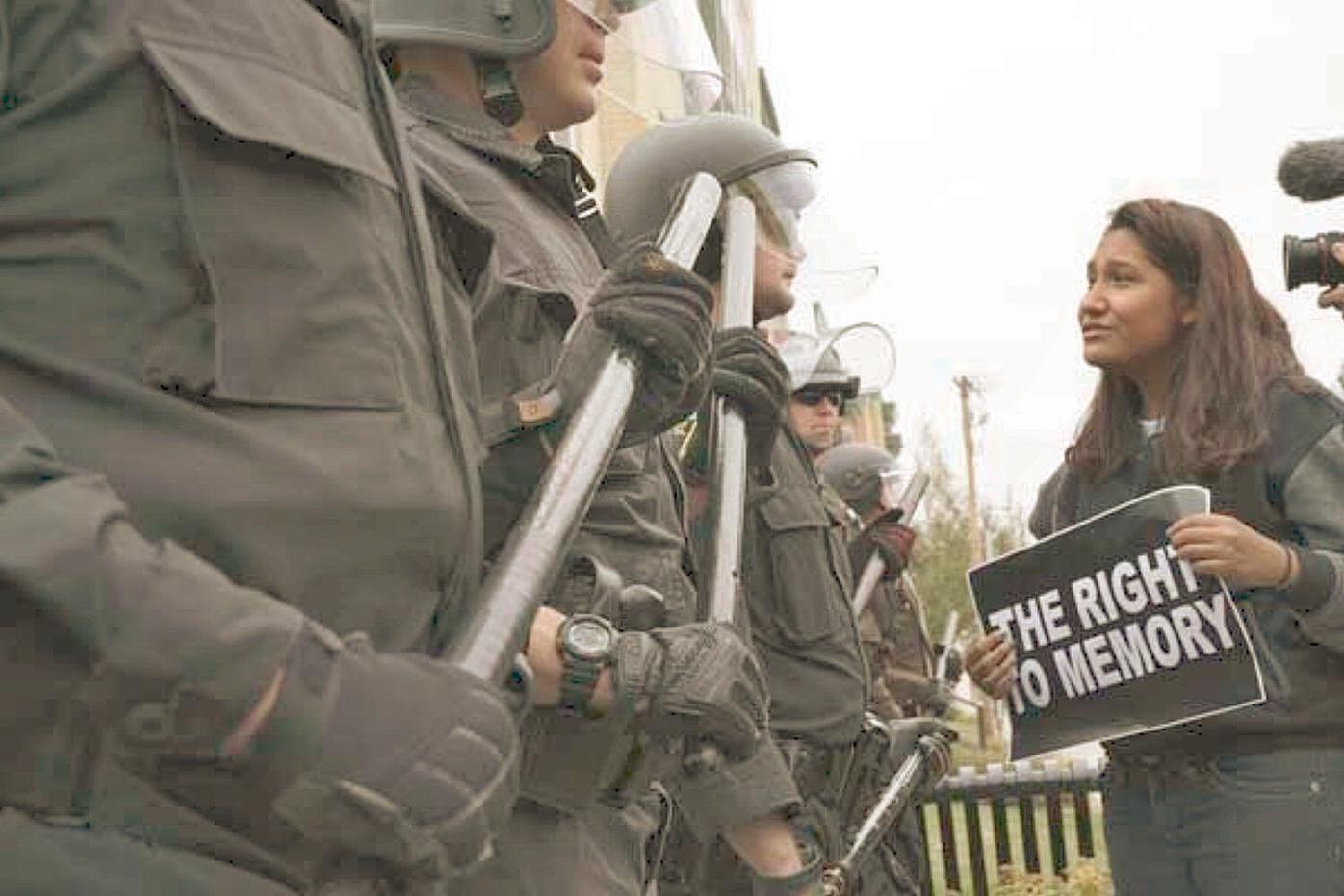 Water protectors plead with police officers in Mandan to consider water for the health of their children, grandchildren, and all future generations in this photo by Marlboro College professor John Willis. 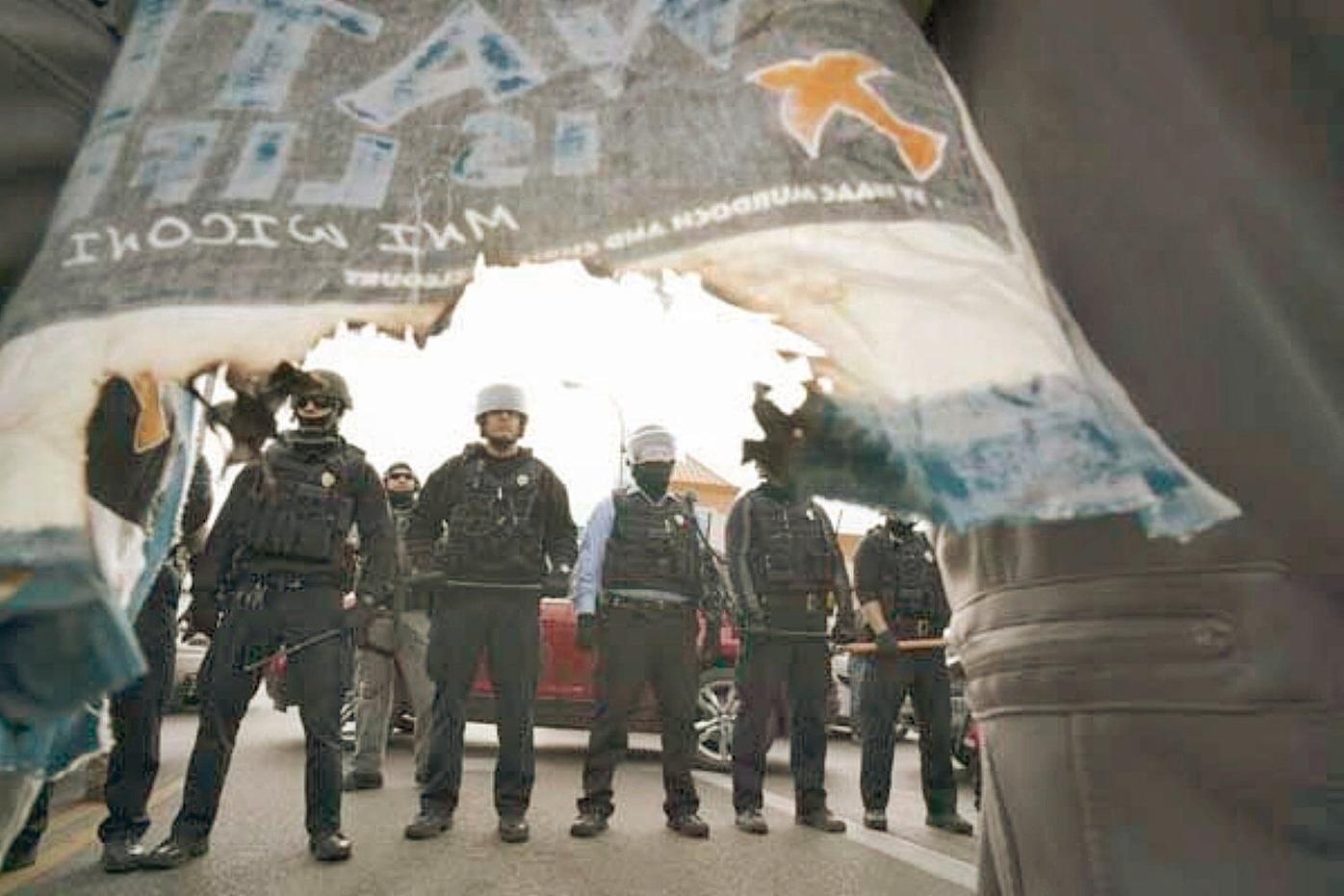 A standoff between water protectors and police outside the U.S. Courthouse in Bismark, N.D.

An impromptu road block was set up to protect North Camp from a perceived threat by a law-enforcement caravan coming south from Bismarck, North Dakota in this photo by Marlboro College professor John Willis at the Standing Rock Reservation.

A Thanksgiving Day action near the site where Dakota Access Pipeline would be placed beneath the Missouri River adjacent to sovereign Standing Rock Lakota land.

Water protectors plead with police officers in Mandan to consider water for the health of their children, grandchildren, and all future generations in this photo by Marlboro College professor John Willis.

A standoff between water protectors and police outside the U.S. Courthouse in Bismark, N.D.

MARLBORO — Photographer John Willis dedicates his new book, "Mni Wiconi Water Is Life: Honoring the Water Protectors at Standing Rock and Everywhere in the Ongoing Struggle for Indigenous Sovereignty," to all water protectors in the world, starting with the indigenous people who, from April 2016 to February 2017, led the movement to resist the location of the Dakota Access Pipeline on the sovereign, sacred lands of the Standing Rock Sioux Nation's reservation in North Dakota.

By the end of the resistance, Willis said, more than 100,000 supporters had participated in the movement.

In 2016 Willis, on sabbatical from his tenured faculty position at Marlboro College, was planning a trip to the Pine Ridge Indian Reservation in South Dakota, which he has been visiting since 1992.

At the suggestion of his colleagues, he invited three Marlboro students, whose individual plans of concentration included connections to indigenous concerns (land issues, treaty rights, and education), to accompany him, and the focus of the trip shifted to Standing Rock.

"Their professors said they could go for a week," Willis said. "In 48 hours, thanks to the generosity of the Brattleboro and college communities, we raised $2,500, filled a van with camping gear, and drove to the Oceti Sakowen campsite (one of three camps for resisters and allies)."

Controversy over the routing process for the pipeline had enveloped the project early on. According to reporting in the Bismarck Tribune, the Army Corps of Engineers rejected a route crossing the Missouri River north of Bismarck, N.D., because municipal wells could be at risk. The route given final approval by the Trump administration took the pipeline under the Missouri River just north of the Standing Rock reservation.

"That's where the Standing Rock tribe gets its water from," Willis said. "The river serves five reservations in the Dakotas, and millions of people in the central part of the country. A pipeline break could be devastating." (The pipeline passes through North Dakota, South Dakota, Iowa, and Illinois.)

The camp had strict guidelines to live by, as explained by camp security at the entrance, Willis said: no guns, no weapons, no drugs or alcohol.

"Everyone was welcomed," he said, "but you were expected to contribute more than you took. Right below the fire circle, there was a volunteer tent where they talked to you about your skills. You weren't forced to participate, but encouraged."

"No one was allowed to photograph the sacred fire circle," he said. "The fire keepers kept the fire lit 24 hours a day the whole time. ... This was a sacred movement. The leaders did not like the word 'protestor' or 'riot' or 'rebellion.' To them it was prayer."

By the end of the week, when Willis and the students had returned to Marlboro, he knew he was going to go back to Oceti Sakowen.

"Between September and the first snows in December, I made at least six trips," Willis said. He and his wife went to the camp in early October, and his last trip there during the book project was in March 2017.

Almost every day, Willis said, there were actions, some kind of public awareness-raising or some type of resistance. Before supporters could participate in actions, they had to receive non-violent action training, which the leaders gave every day.

"You might stand outside banks that were funding the pipeline, or stand on the side of the road where the pipeline was being buried that day. There was never any intention to create violent acts, rather to have prayerful ceremony," Willis said.

In "Mni Wiconi Water Is Life," due out in early December, Willis includes the voices of Lakota people and their allies. The resulting book he describes as "a layered assemblage of contemporary and historic photographs, stories, poems

It's collectively meant to portray a partial story of the 11-month-long peaceful resistance through the accounts of more than 50 contributors, so that readers get a true sense of what happened at Standing Rock and why.

"The national media missed so much, and this book is meant to fill in the many gaps in the coverage. It was a gift—a wopila—for me to be able to work with the contributors," he said.

One hundred percent of his royalties from this project, Willis said, will go to legal defense funds supporting the 814 cases of individuals currently charged through the judicial system, through the Water Protectors Legal Collective. If there is no longer a need to provide financial support for the defendants in those court cases, the remaining funds will be donated to support environmental causes on reservations.

When Willis first visited the Pine Ridge Indian Reservation in South Dakota in 1992, he met Eugene Reddest, an Oglala Lakota elder, and his family, of Lost Dog Creek. At first the family wanted nothing to do with photography.

"Indigenous people have an understandable mistrust of film and cameras," Willis said, explaining that in the early 20th century, photos of religious ceremonies were used as evidence in court to prohibit the practice of traditional ceremonies. That didn't change until 1978 with the passage of the Religious Freedom Act.

That first year, Willis photographed landscapes. But as he continued to visit, he earned the family's trust, and he was asked to bring his camera to Reddest family events, such as birthday celebrations and graduations — but never ceremonies.

"The last conversation I had with Eugene before he died," Willis said, "he asked me what I planned to do with the photos I'd taken. I said I didn't know. He asked me to use them to help his family and his people."

With permission granted, Willis sold some photos to Hunger Mountain Literary Magazine, a publication of Vermont College of Fine Arts. He used the money to buy the Reddest family a chain saw.

To accompany his photographs in the first edition of "Views from the Reservation," Willis enlisted indigenous voices to offer a more complete story, including Lakota elders and high school students from the Pine Ridge Reservation. The revised edition adds a bit more contemporary narrative since the 2010 edition.

"Being around Eugene, I realized how strong family and culture can be," Willis said. "This was something sorely lacking in my suburban upbringing with a family who denied or did not know details of our European heritage. I fell in love with indigenous culture and the people."

In addition to teaching at Marlboro College and actively engaging in his own creative work, Willis is co-founder of both the In-Sight Photography Project in Brattleboro, a non-profit program that teaches photography to adolescents regardless of their ability to pay, and its Exposures Cross-Cultural Youth Program. His website, www.jwillis.net, provides comprehensive information about — and several portfolios of — his work.

Freelance writer Nancy A. Olson contributes to Southern Vermont Landscapes from Putney and can be reached at olsonnan47@gmail.com.