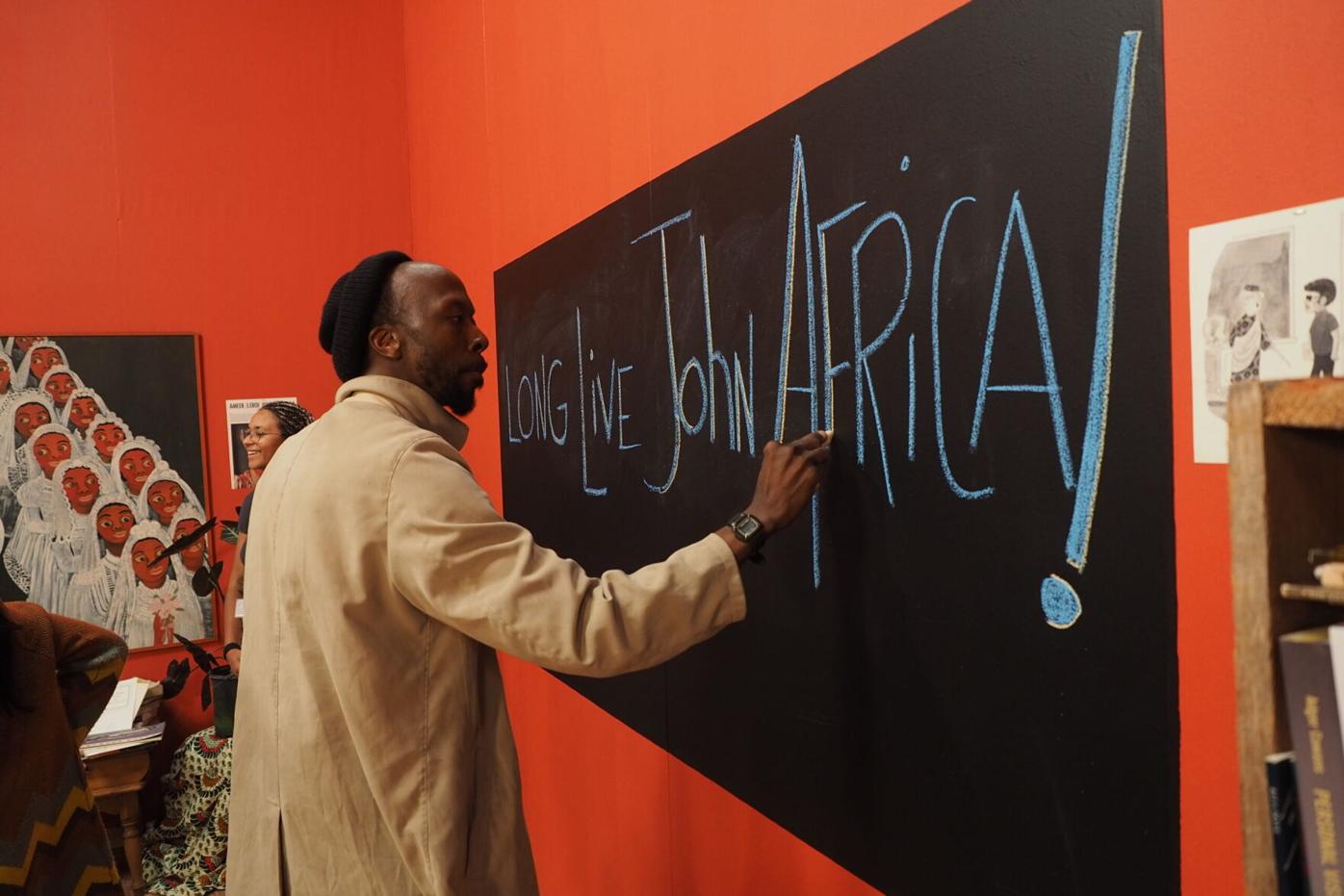 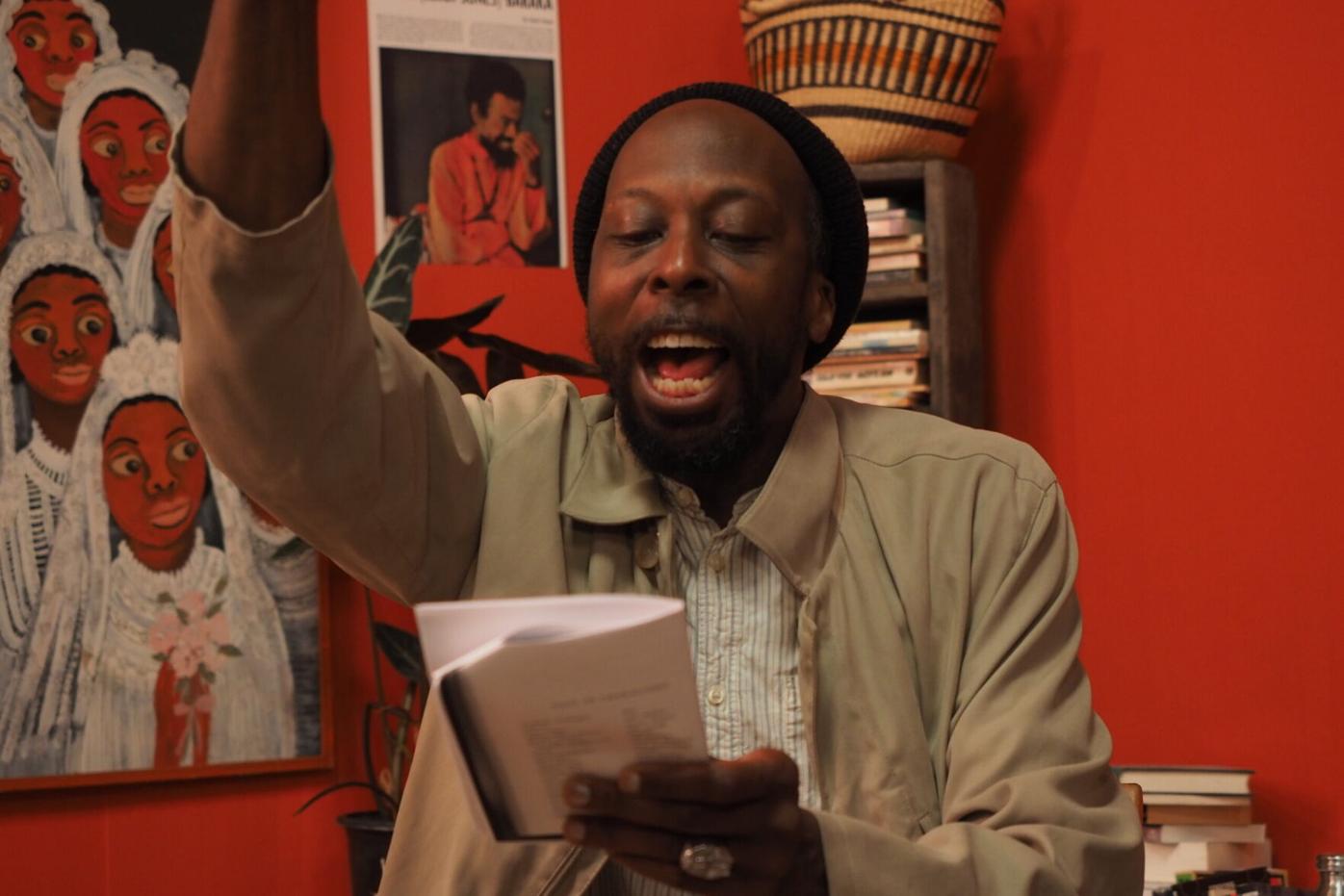 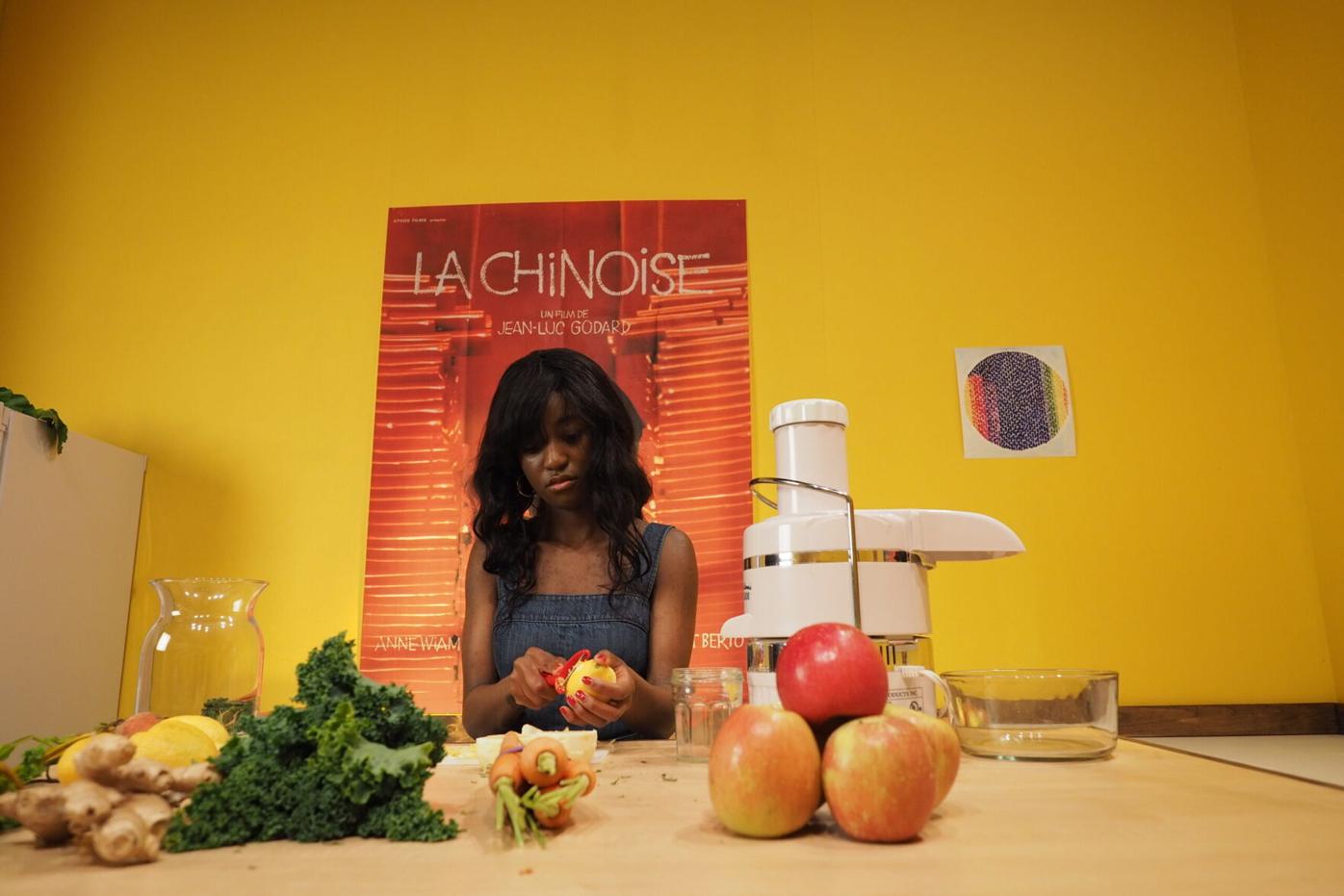 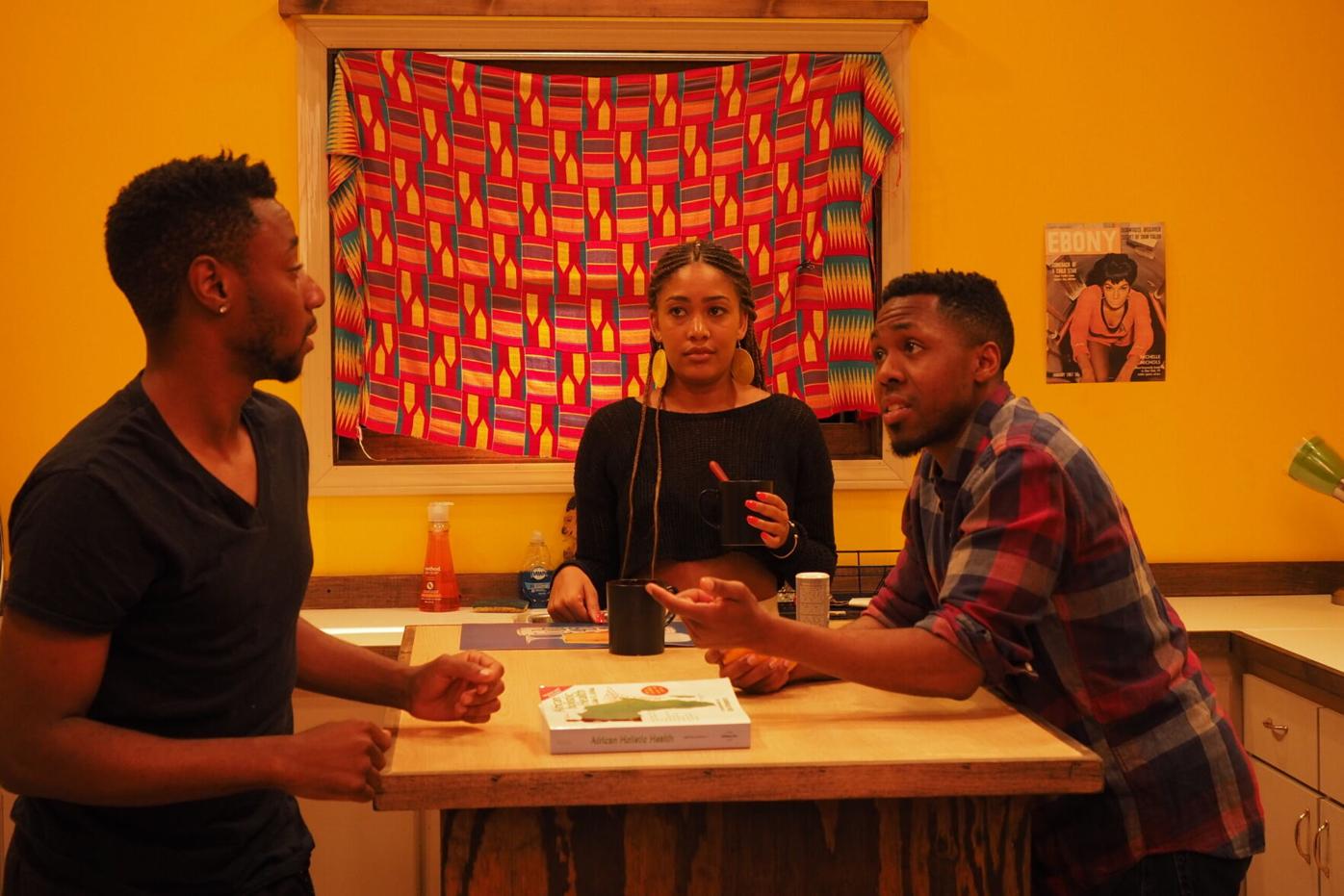 Author’s note: The MOVE Bombing: On May 13, 1985, at 6221 Osage Ave., an armed conflict occurred between the Philadelphia Police Dept. and MOVE members. A Pa. State Police Helicopter dropped a bomb on MOVE’s house. An uncontrolled fire killed 11 MOVE members, including five children, and destroyed 61 homes. Students at the Jubilee School, a private middle-school at 42nd and Chester streets, researched the 1985 MOVE bombing and successfully campaigned for the State Historical Marker installed on the southeast corner of Osage Avenue and Cobbs Creek Parkway in the summer of 2017.

What does it mean to awaken and what sacrifice is required? And as we talk about decolonizing, what does it require? In other words, what does it cost of us beyond our ability to use the accepted social justice language of the moment?

These and other questions are posed by the film, “The Inheritance,” a directorial debut by Ephraim Asili, in ways that stretch the imagination of the viewer. This speculative narrative and sensorial film are rooted within the very real events related to the Philadelphia 1972 group, MOVE. Throughout the month of March (March 6 through March 26), Epsilon Spires — a center of communication, illuminating the relationships between creative arts, natural sciences and sustainability using multimedia platforms — is bringing “The Inheritance” to Vermonters, and anyone who wants to access this film through their website. Tickets, available through the website at Epilonspires.org, will be $10. It has also premiered at the Toronto International Film Festival.

MOVE is a Black liberationist group that started in Philadelphia in 1972, a group who sought to deconstruct racial oppression and seek self-liberation. True to the facts taken directly from the historical marker that opens this piece, MOVE was bombed by the Philadelphia police.

Asili’s film defies category in terms of how it bends time to connect facts related to MOVE and connect the characters to the history of that time and space. The viewer is immediately enveloped and greeted with surprises around each turn of the film. This is especially true within the opening scenes, which include an image of a “DO NOT ENTER” sign along with an image upon a concrete wall with a heart and words in the center of it — “What’s Mine is Yours.”

No different than the opening chapter of a book teaching its reader how to read it, the opening scenes of “The Inheritance” skillfully teach us to engage with the film and its characters as neighborhood, art, history and the bodies involved in this telling are intimately intertwined.

The interwoven nature of all of these and other elements is also the charm. The additional allure is the way Ephraim Asili curated “The Inheritance” in a way that encourages the viewer to ask the tough questions, especially as it relates to the language we use.

I had a chance to ask Asili to expand on the challenge of terms like decolonize and other language.

“These are the questions I am always asking myself and one of the questions I asked myself in making the film, and that was kind of the premise, ‘In what way can the film be helpful in these regards.’ I think a lot of us struggle with this issue of words and language. Sometimes when we use terms like decolonization, I fear that it’s such a wide term. How exactly do we decolonize X, Y or Z? One of the goals with the film is trying to show how, maybe in some subtle ways, this group of young activists are absorbing information and then trying to use it to transform their personal lives. Primarily in this film, and then that that will spill out into change in the real world. It’s kind of this idea of like recalibrating, like OK, how can I decolonize my relationship? And then from that, how can I then go and talk to my neighbor? But just that step of how can I decolonize my relationship with my partner? Well, that’s a big thing right there.”

Within the film, Asili’s vision for answering this question is conveyed through the main character, a young man who inherits his grandmother’s house set within West Philadelphia. We are taken through the experience of the transformation of the space, the relationship of this young man to his grandmother’s possessions inside of the house, his relationship to his partner and their relationship to others as they work to make it an activist collective in response to the events of the current moment.

We are not given any specific date, but we do know that the main characters are navigating the tension between historical, political and artistic revolutionaries — such as Shirley Chisholm and the appearances of poets Sonia Sanchez and Ursula Rucker — and what their response needs to be for this specific moment.

This film couldn’t be more timely given that we find ourselves within a moment in which we have experienced an unbroken continuation of violence against the Black body, especially at the hands of law enforcement. “The Inheritance” immerses us into the tensions of race, class and gender while raising questions about the educated and those who do not fall into that category. Or to quote one of the characters reading from a text, this film encourages to think about, “…art versus aint, life versus death, creativity versus destruction…”

Asili’s skill is in the way that these layers are uncovered in dimensions that extend beyond the usual on our screen. Some of these instances are when it feels like the fourth wall is broken between the characters and the viewer, like when one of the characters is reading from a text that asks:

The layers and textures are also embedded in the skillful incorporations of live music that balances with the speculative narrative. The way words are woven in from a few powerful quotes strategically placed within scenes as key parts to the visual landscape of the film, to the ways that the viewer is often enmeshed within scenes that become spoken word.

Additionally, what does not go unnoticed are the ways that space is used within “The Inheritance.” We are physically brought inside of the space and the characters being transformed while also given well-paced opportunities to explore the other space that all of this occupies: the surrounding neighborhood and events that navigate between nowness and past.

I encourage you to come to “The Inheritance.” As you come to it, be ready to be immersed beyond the screen.

And this is key especially for many of us who live in the Zoomverse these days. The immersion of this film becomes a sensorial and multi-textured experience that takes you beyond images and transcends place.

Also, do not be surprised if you come away from the film with notes for other explorations beyond “The Inheritance” as Asili has intended for the film to leave all of us with more as he shares, “I wanted it to be a collage. Maybe you don’t get everything, but you’ll at least walk away with maybe a book you want to read, a musician you want to check out, or just an idea you hadn’t thought of that you want to revisit.”

In other words, as time is bent, we are summoned to think about: What are the ancestral voices that laid foundations for us to think about how to respond to this moment? What does it mean to be a revolutionary? As we use words like “decolonize,” what will that demand of all of us and our relationships to others?

All to say, if we are speaking the language of the now, how do we craft a life to match fighting against what does not work? As you open yourself to Ephraim Asili’s “The Inheritance,” be ready to question how we are awakening to the now.

And on a personal level, what does it mean to inherit, because as the film implies, an inheritance of history, revolution and even art, demands that we make space for it. It demands that we open ourselves to an expectation that breaks beyond anything that does not work for us within the pressure of a status quo.

Shanta Lee Gander, of Brattleboro, has had her work featured in many publications, is the 2020 recipient of the Arthur Williams Award for Meritorious Service to the Arts and was named as the Diode Editions full-length book contest winner for her debut poetry compilation, “GHETTOCLAUSTROPHOBIA: Dreamin of Mama While Trying to Speak in Woke Tongues,” forthcoming in June. Gander gives lectures on the life of Lucy Terry Prince as a member of the Vermont Humanities Council Speakers Bureau and is the 2020 gubernatorial appointee to its board of directors. To learn more, visit Shantaleegander.com.