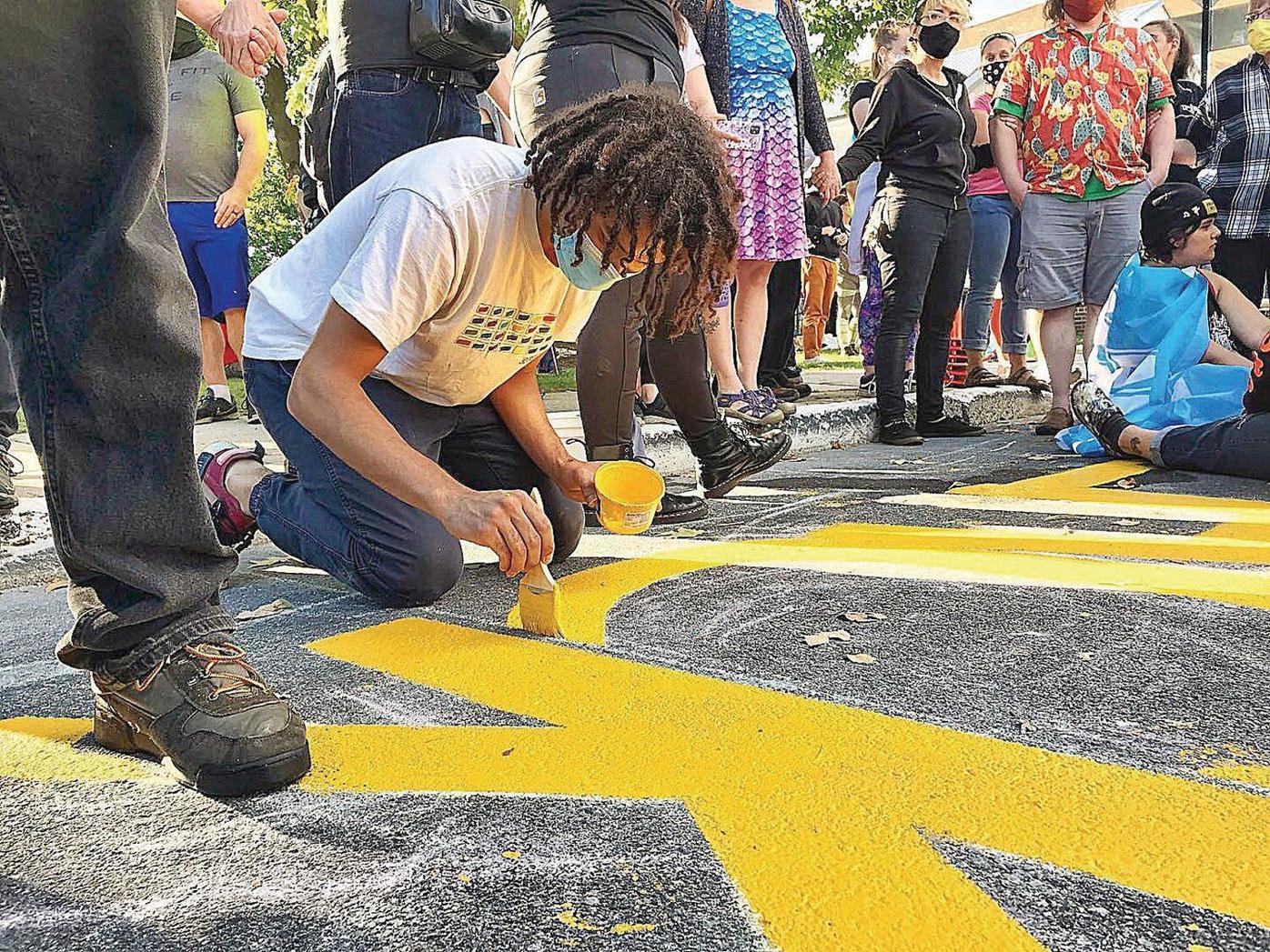 Izaiah, who asked that his last name not be used, calmly and carefully paints around the feet of a protestor in an attempt to block the painting of the Black Lives Matter mural along South Street in Bennington late Sunday afternoon.photos by CAROLINE BONNIVIER SNYDER BENNINGTON BANNER 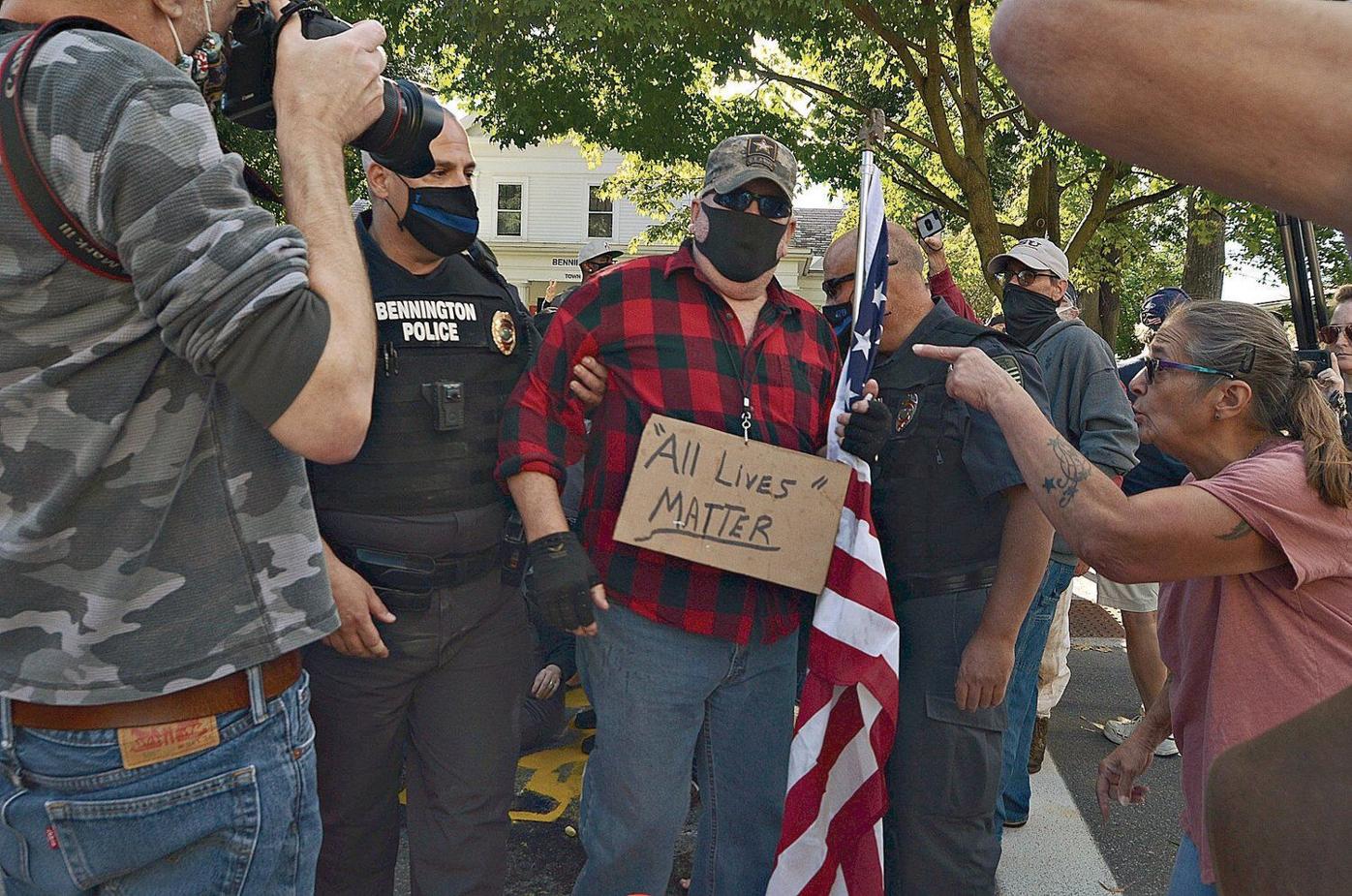 A protester is escorted away from the Black Lives Matter mural by a police officer along South Street in Bennington late Sunday afternoon.

Izaiah, who asked that his last name not be used, calmly and carefully paints around the feet of a protestor in an attempt to block the painting of the Black Lives Matter mural along South Street in Bennington late Sunday afternoon.photos by CAROLINE BONNIVIER SNYDER BENNINGTON BANNER

A protester is escorted away from the Black Lives Matter mural by a police officer along South Street in Bennington late Sunday afternoon.

BENNINGTON — Painting of a Black Lives Matter street mural in front of the Bennington town offices was a community event, as the organizers hoped, but it also involved a confrontation with people there to protest and often disrupt the effort.

Rising and falling levels of confrontation, which led to at least four arrests after shoving or other incidents, was focused on protesters standing on sections of the pavement marked off for the mural or otherwise interfering with volunteers as they painted in the mural letters.

Before and throughout the three-hour mural painting, from 4 to 7 p.m., a number of protesters stood in the way, while many supporters of the mural joined hands to form a circle around the area to protect space for the volunteer painters.

The mural had been marked off in chalk by a group of artists to form the words Black Lives Matter at the edge of South Street in front of the town offices.

A crowd estimated at approximately 250 volunteers and protesters attended the event, which included music from groups and individual performers. Snacks also were provided by the organizers. But the atmosphere never reached the level of relaxation common to a downtown street fest.

The police presence was strong, with a dozen officers continually walking the area, including Chief Paul Doucette and Lt. Camillo Grande. Officers moved in quickly whenever voices of those debating the mural were raised or shoving or a confrontation began along the line of the mural site.

Among those arrested was Max Misch, who at one point tried to duck under the arms of those protecting the mural and later walked in wet paint across the lettering, police said.

Misch admitted trolling former state Rep. Kiah Morris, of Bennington, on social media prior to her decision in 2018 to drop her re-election bid because of racially motivated and other harassment. During the event Misch, like some other protesters, carried an anti-Black Lives Matter sign.

Tempers also flared when a Black man apparently objected to comments from some protesters, but he was removed from the area by friends.

Doucette said those arrested and taken into the nearby police station would be cited and police will be issuing a release concerning charges.

Among those protesting by standing in the mural space was Mindy Jo Harrington, who said she and others were really protesting the national Black Lives Matter movement.

"I don't think it belongs in Bennington," she said. "They [the BLM movement] want to de-fund the police; we want to defend them. Talking to a supporter of the mural she added, "I'm here because I'm against BLM, not you guys."

Mike Bowen, who said he came to the site at 1 p.m. and remained throughout, said his major concern is that the entire town did not have a say in allowing the mural, which was approved by the Select Board after a request from the local group.

Also protesting by standing in the mural site was Josh O'Dell, who has stood recently on the Four Corners wearing a Guy Fawkes mask and carrying a rifle. He wore the mask on Sunday but was not armed.

In attendance as well were several people holding "Support Our Police" signs who gathered on the steps of the police station, and a large Trump flag was displayed for a time across South Street near the Union Street intersection.

All of the protesters moved off the mural site after the event officially ended at 7 p.m., and traffic along South Street, which had been diverted by police, was allowed back through the area about 15 minutes later.

"I think it went very well," said Mary Gerisch, one of the organizers, said. "All things considered, not only do I think it went well, but I think the protesters demonstrated to most people how much we need [a Black Lives Matter mural]."

The group of artists and others "had to totally change our format of how we are organizing the painting," Gerisch said, because of protesters standing or sitting on the mural site. She lauded the volunteers for not engaging in arguments with protesters and attempting to ignore the interference.

Those who were arrested, she noted, were not among those working on the mural. In remarks to the crowd, Gerisch said the mural will become an important symbol for visitors or potential new residents who are from a minority or marginalized community that they are welcome in Bennington.

Cynthia Taylor, one of the artists who planned the mural and chalked off the lettering for volunteers to fill in with paint, said afterward that group members counted on having to touch up lettering and other sections once everyone left for the night. She said the paint, acquired through private donations, is designed for use on road surfaces and "turned out to be great" in part because it is fast drying.

In addition, the group will have artists on call 24 hours a day to repair any sections that might be vandalized or otherwise defaced. The town has mounted surveillance cameras near the mural, and police have agreed to notify the group if something happens to the mural.

"We're fine for today," Taylor said. "We can't do anything else until the obstructions move. And now in a legal sense, once it's complete, if anyone defaces it from now on they'll be charged."

Doucette said he and other members of the department planned to be at the site until well after 7 p.m. He added that, given the amount of harsh commentary on social media the site will likely have to be monitored for some time.

He said that after conferring with the State's Attorney's office, the Attorney General's office and with other officials in the state concerning other BLM events, the department would not be arresting people for merely standing in the street in protest.

"However, if people become disorderly or they become physically violent, they will be arrested," he said. "That's the way we are going to handle it. We will continue to let both sides say their piece and explain to each other why they are here."