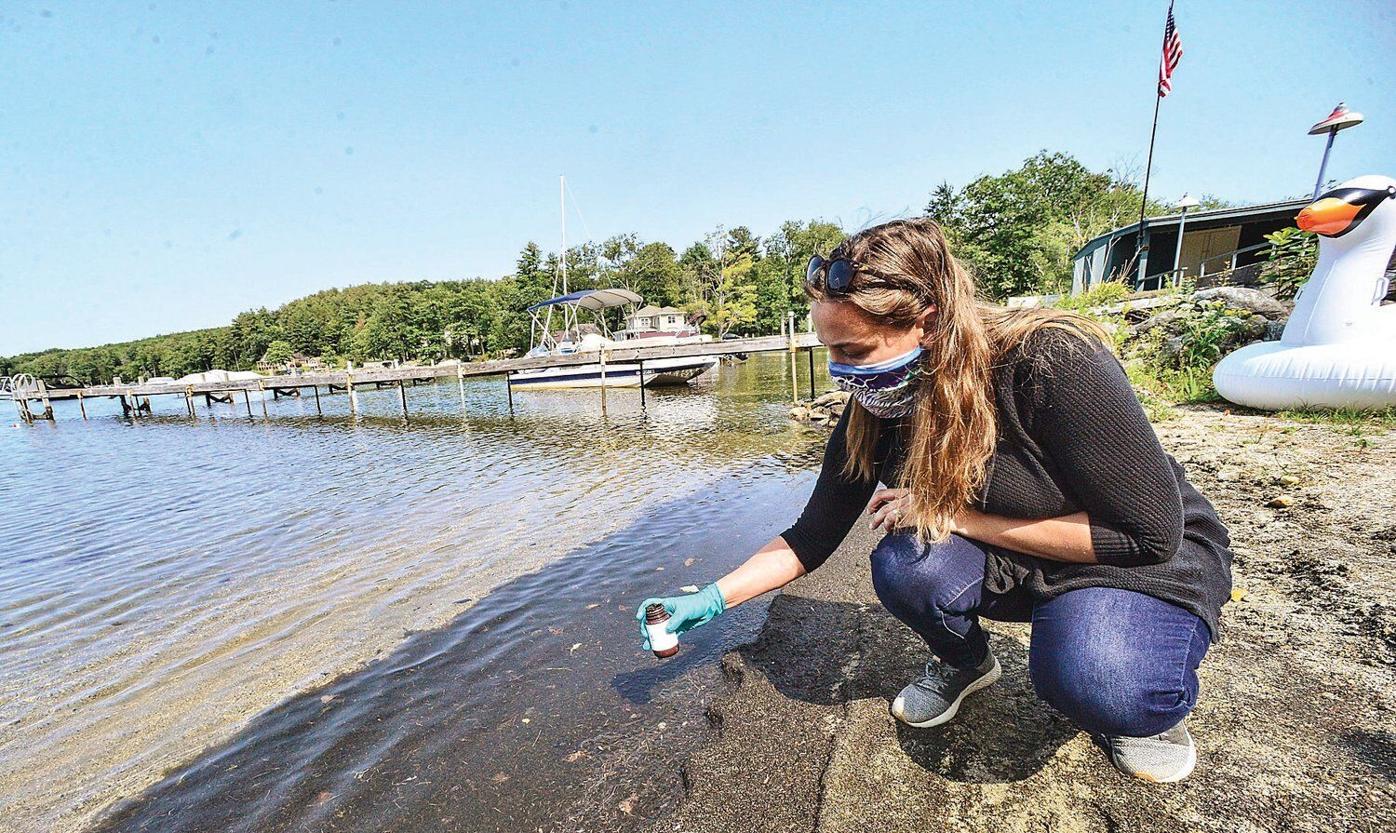 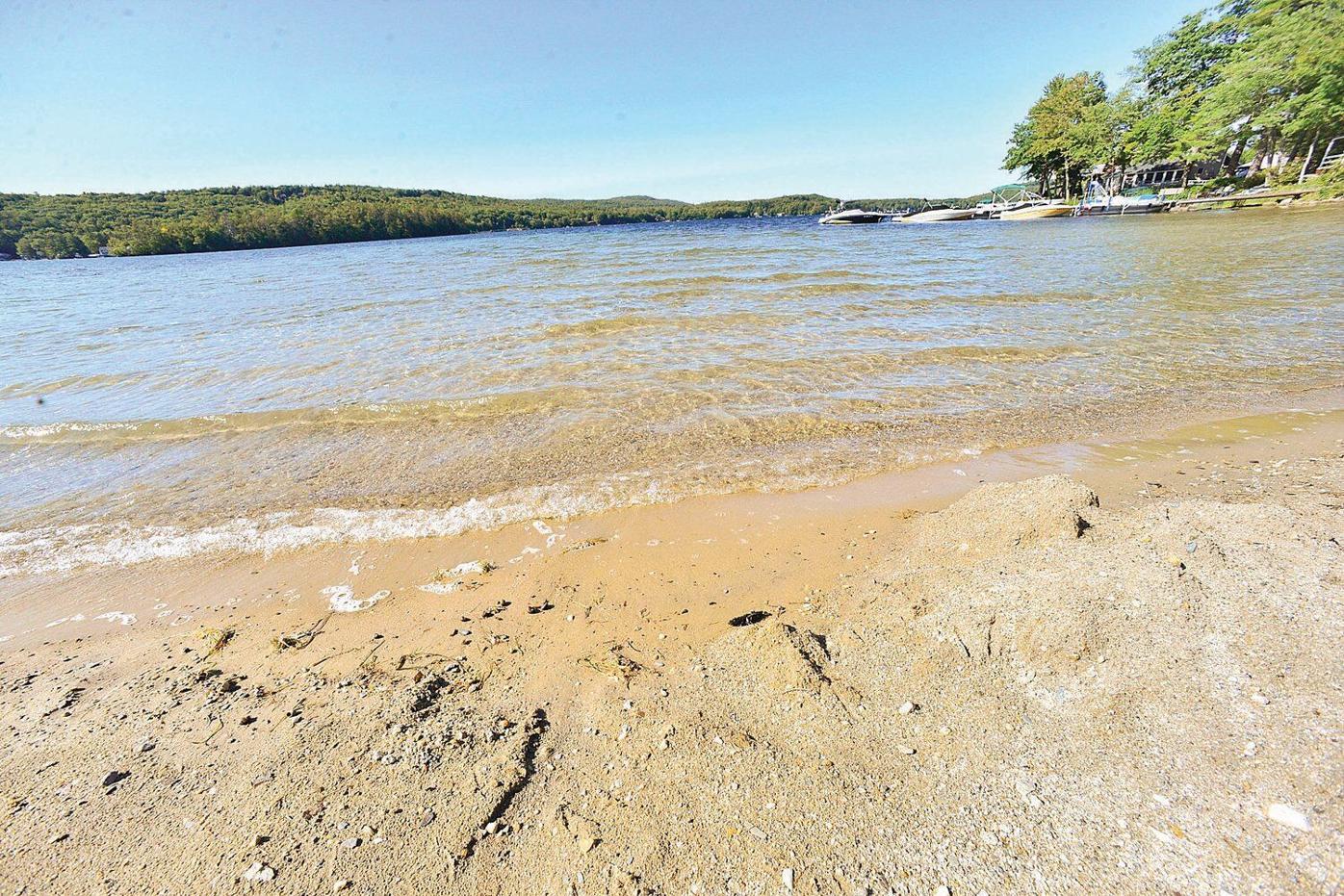 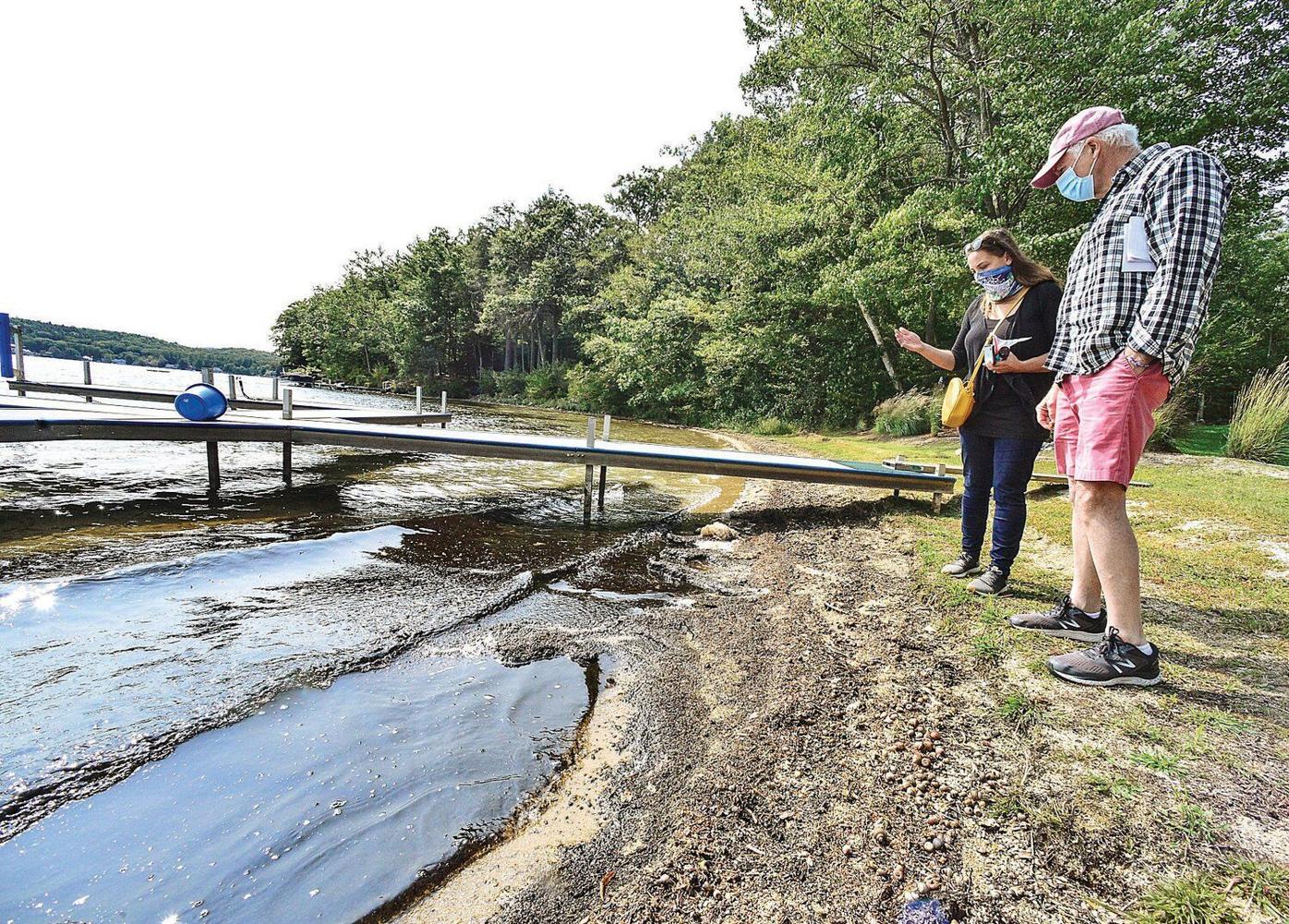 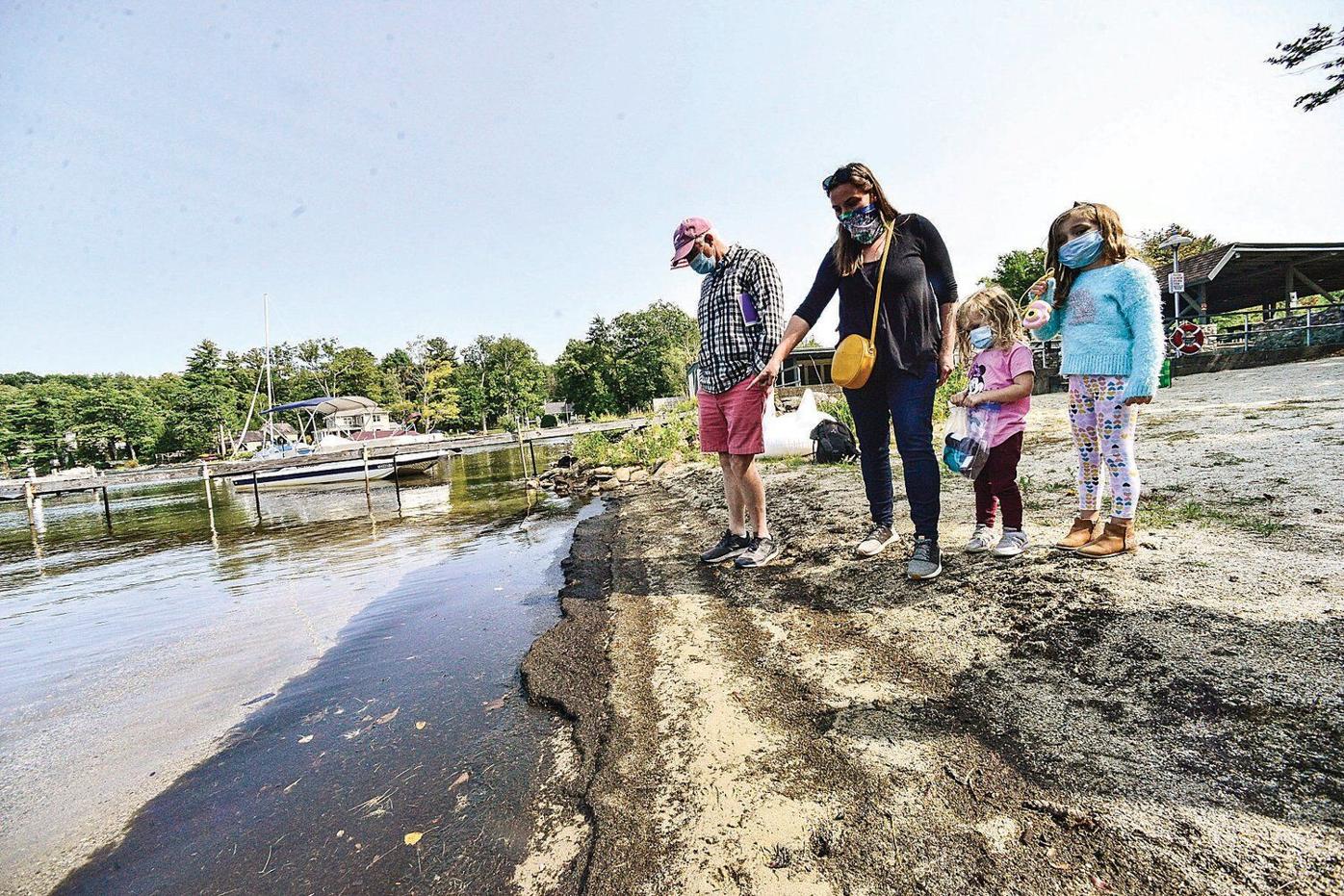 CHESTERFIELD, N.H. — One state official is scratching her head trying to determine what has caused unsightly, smelly and possibly toxic blooms of cyanobacteria in the crystal clear waters of Spofford Lake.

"There are a lot of factors that might have caused the perfect combination to support this growth," said Amanda McQuaid, coordinator of the New Hampshire Department of Environmental Services beach program and harmful algal and cyanobacterial bloom program, after visiting the lake and taking samples on Wednesday.

On Sept. 10, the New Hampshire Department of Environmental Services issued a warning for Lake Spofford for a "quite unusual" cyanobacteria bloom.

The cyanobacteria, also commonly known as blue-green algae, was initially identified as Lyngbya wollei, appearing as a black sludge, which is "not typically found in New Hampshire lakes," stated the advisory.

McQuaid said without a DNA analysis, she can't confirm 100 percent that the bloom is actually the species known as wollei, but it is definitely of the genus Lyngbya, which belongs to a genetic family that includes nearly 2,700 species of the algae. Scientists believe there are actually close to 7,000 species of cyanobacteria, and McQuaid believes Spofford Lake might be home to one of those as yet unidentified species.

"We are curious if it's a new species we haven't characterized," said McQuaid. "That would be exciting but also concerning."

The state was called to Spofford Lake after black, oily mats began washing up on a couple of private beaches.

"It's possible it's been growing down there for some time, but we've never seen it until now," said McQuaid.

As a precaution, the state warned people not to go in the water at the lake's public beaches. On Wednesday, McQuaid visited the lake and took samples. She said she was alarmed to learn that it appears the blue-green algae is more widespread than first indicated.

"It's very natural to have mats of cyanobacteria," she said. "But this is a very unusual scenario where it's piling up. And it's excessive. How extensive it is in the lake is unknown at this time."

Lyngbya is the type of cyanobacteria that grows at the bottom of lakes. Certain conditions can cause the algae to detach from the bottom and float to the surface.

"Sometimes it just takes a little bit of agitation for it to become dislodged ," she said.

McQuaid said the mats look to most people like normal detritus — rotting leaves and other materials that might get washed into the lake during a rainstorm. But when you get closer, she said, the odor and appearance quickly dispel that notion.

Lyngbya is not uncommon in New Hampshire, though the species wollei has not yet been found in New Hampshire, said McQuaid, and while it's not considered an invasive, it is also not native to the lake. She said it's almost impossible to pinpoint when this type of algae might have been introduced to the lake, considering how intensely Lake Spofford has been used over the past 100 years.

Lyngbya cells can be transferred from one water body to another by boat hulls and bilge water, according to the Center for Aquatic and Invasive Plants at the University of Florida, and by many animal species such as birds, turtles, alligators, raccoons, and insects. "Cells can also be transported by wind events such as storms and hurricanes that can transport water droplets or particulate matter over large distances.

McQuaid said this year's high temperatures, the lack of rainfall, human activity and the lack of solid ice last winter might have contributed to the blooms popping up around the lake. But the major factor, she said, is most likely climate change.

"Certainly the warming temperatures have supported its growth," she said. "You also have a very clear lake that allows more sunlight to get down to the bottom."

Other factors include nutrients being washed into the lake during heavy downpours, followed by hot, sunny days with little rain. Shorter winters, earlier springs and hotter summers might also have contributed to the blooms.

As with Spofford Lake, heavy development along any lakefront can add nutrients to the water. But despite the number of houses and cabins around the lake, the state classifies it Class A with excellent water clarity.

McQuaid said the lake is one of the finest in the state, and having excellent clarity also means more sunlight on the bottom, feeding cyanobacteria.

The lake is 739 acres, or 1.1 square miles in size, according to the Chesterfield Conservation Commission, with an average depth of 30 feet and maximum depth of a little more than 60 feet. Its water is provided mainly by surface run-off and groundwater infiltration. There is a dam and outflow on the eastern side. For its size the lake has a fairly small watershed, according to the Commission, which is largely comprised of undeveloped wooded hillsides surrounding the lake.

McQuaid said DES does not currently permit for the use of algaecides to kill cyanobacteria blooms, it is considering doing so. But even if algaecides are used, she doubts it would be very effective on something that roots on the bottom of lakes. Dredging a deep lake could cause problems not related to the blooms and might even stir up more blooms, so that's not going to work either, she said.

"Everyone can do their part," said McQuaid, by following local and state regulations, and using best management practices in the lakefront district.

Right now, the best thing people can do is to not touch it and don't allow dogs near it.

"Dogs are attracted to the smell and taste, but it makes them sick," said McQuaid.

McQuaid warned that people should be careful removing it.

"It can cause rashes," she said. "If someone was to consume it, which is unlikely, it's toxic. We just don't know how toxic."

According to the Environmental Protection Agency, in some case, Lyngbya wollei can cause fever, headache, vomiting and bloody diarrhea in humans.

McQuaid said the blooms on Spofford Lake might be "a sneak peak" as to what to expect in the future, but she doesn't think the current bloom means Spofford Lake's ecosystem is in danger.

"We're not going to eradicate this," she said. "We might see more of it in the future."

And then again, she said, "We don't really know what to expect. It could happen again or not happen again."

This fall, as the lake starts to cool and water flows in response, more of the Lyngbya might pop up.

She advised anyone along the lake to keep a look out over the next several weeks.

"People just need to be on the lookout and understand what it is," she said.