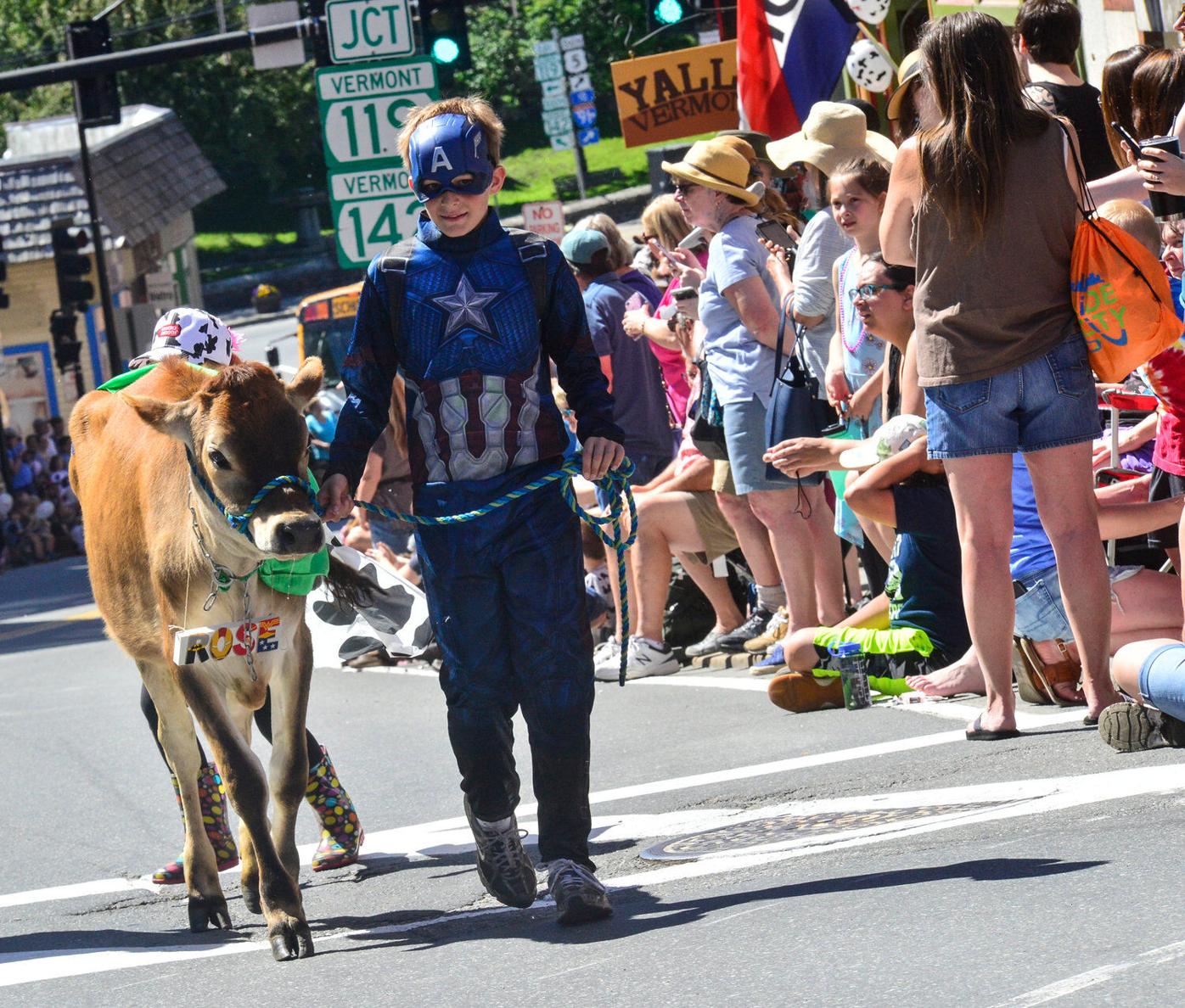 Dominic Palazzo dresses as Captain America while walking with a heifer during the annual Strolling of the Heifers parade in Brattleboro on Saturday. 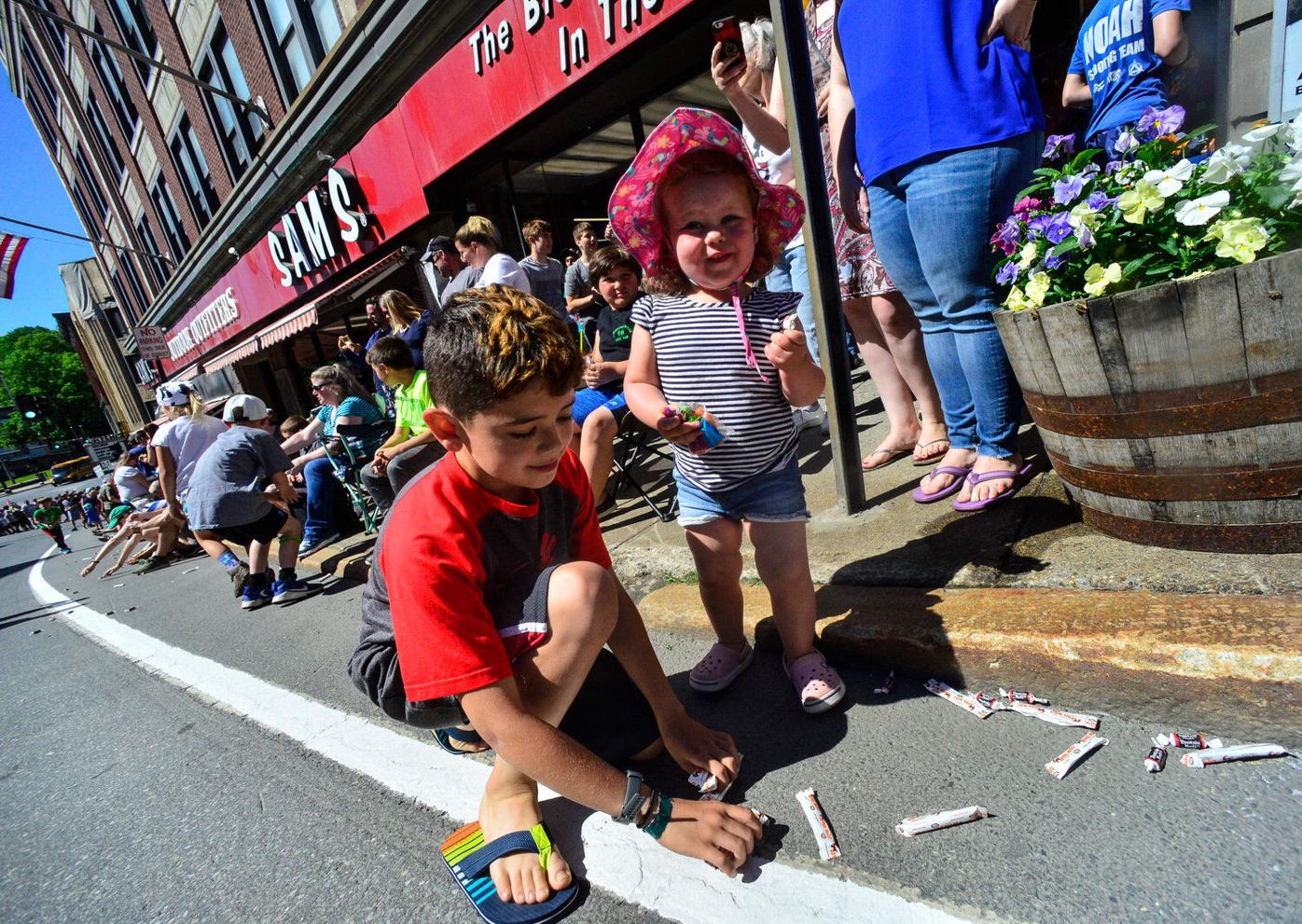 Sam Rodriguez, 9, and Celeste Unrath, 2, from Jericho, Vt., grab pieces of candy during the annual Strolling of the Heifers parade on Saturday. 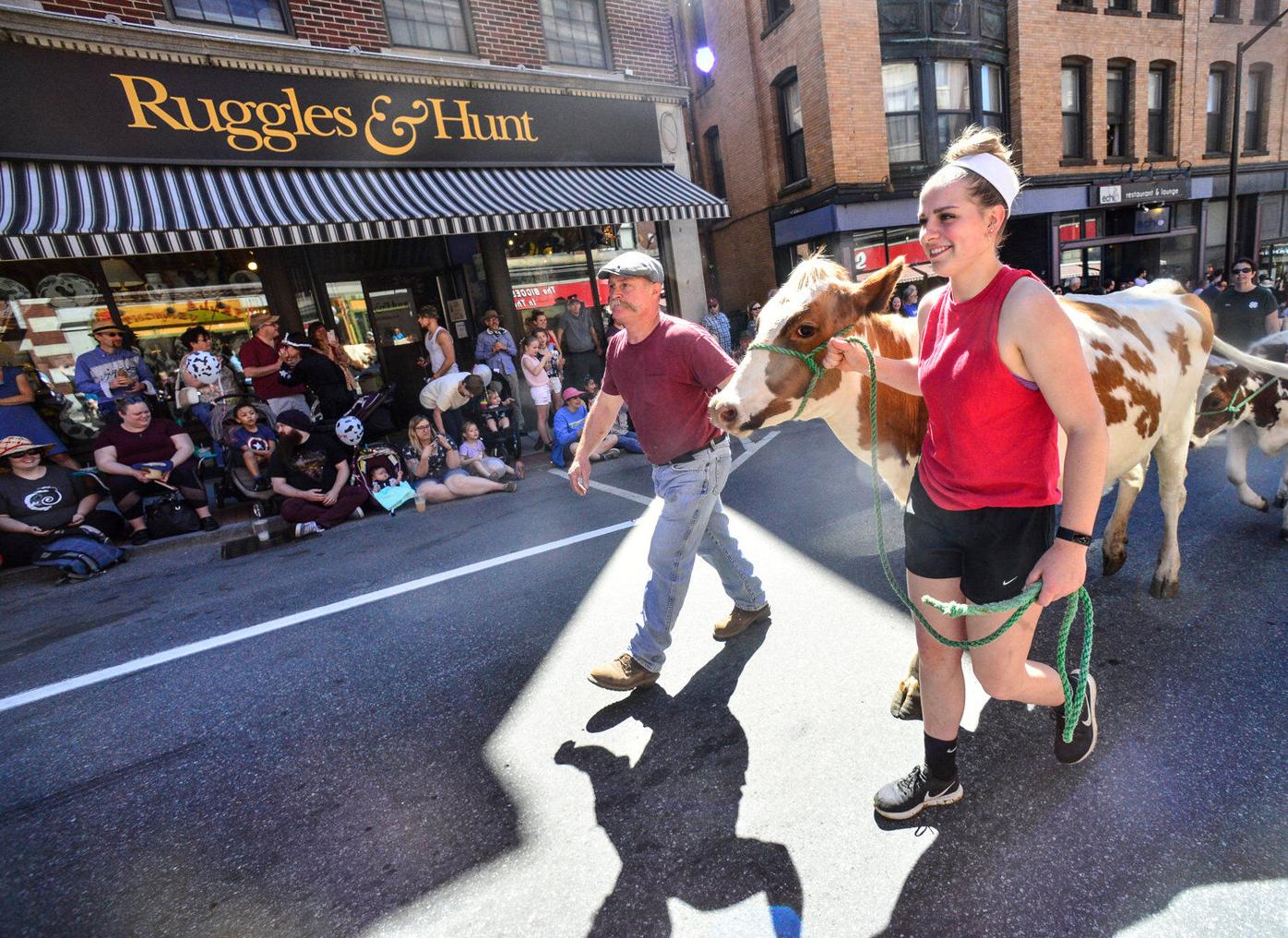 Andie Majewski, of Winchester, N.H., walks a heifer during the annual Strolling of the Heifers parade in Brattleboro on Saturday. 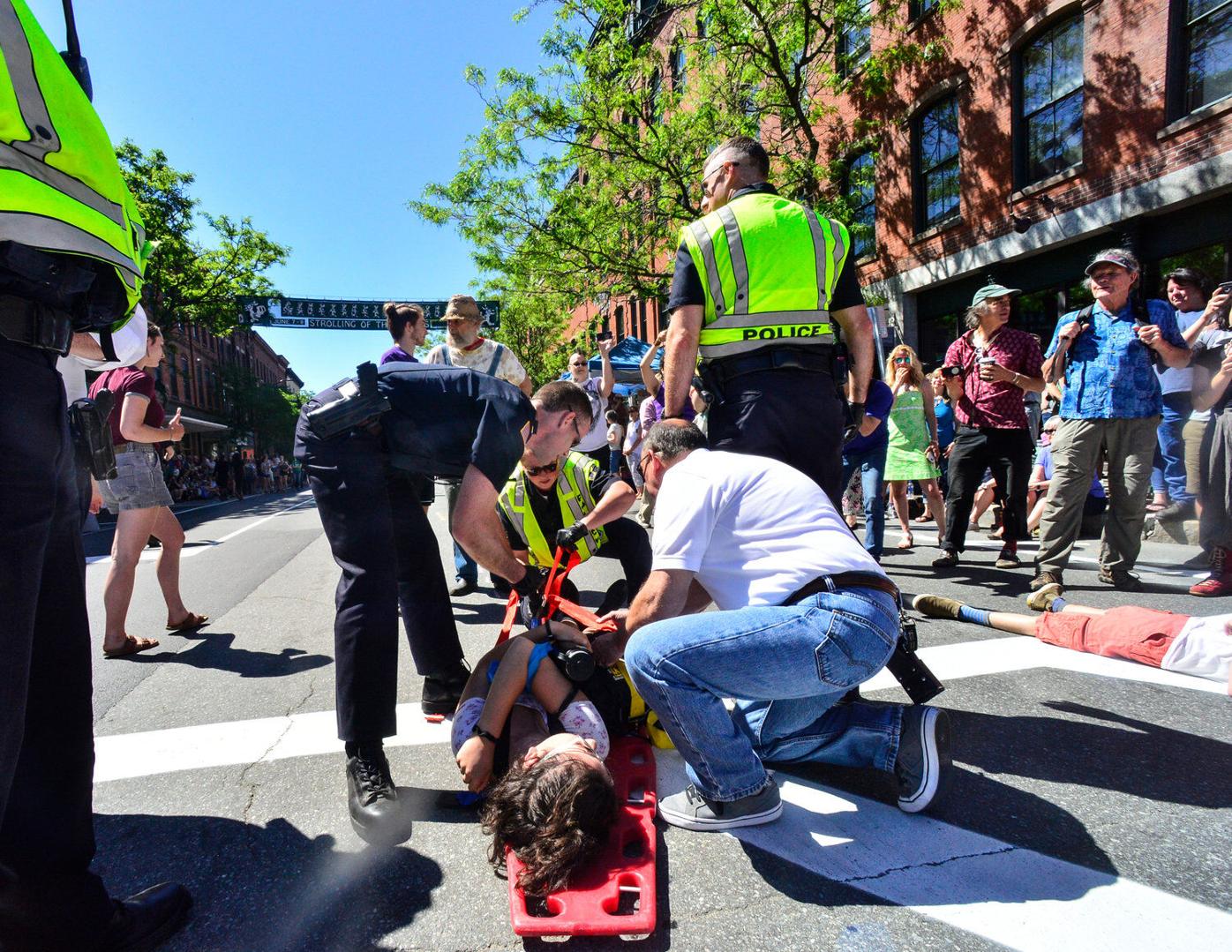 Members of the Brattleboro Police Department briefly detained two protesters after a group protesting climate change laid down in front of the stage, causing the Strolling of the Heifers parade to halt for around 20 minutes on Saturday. 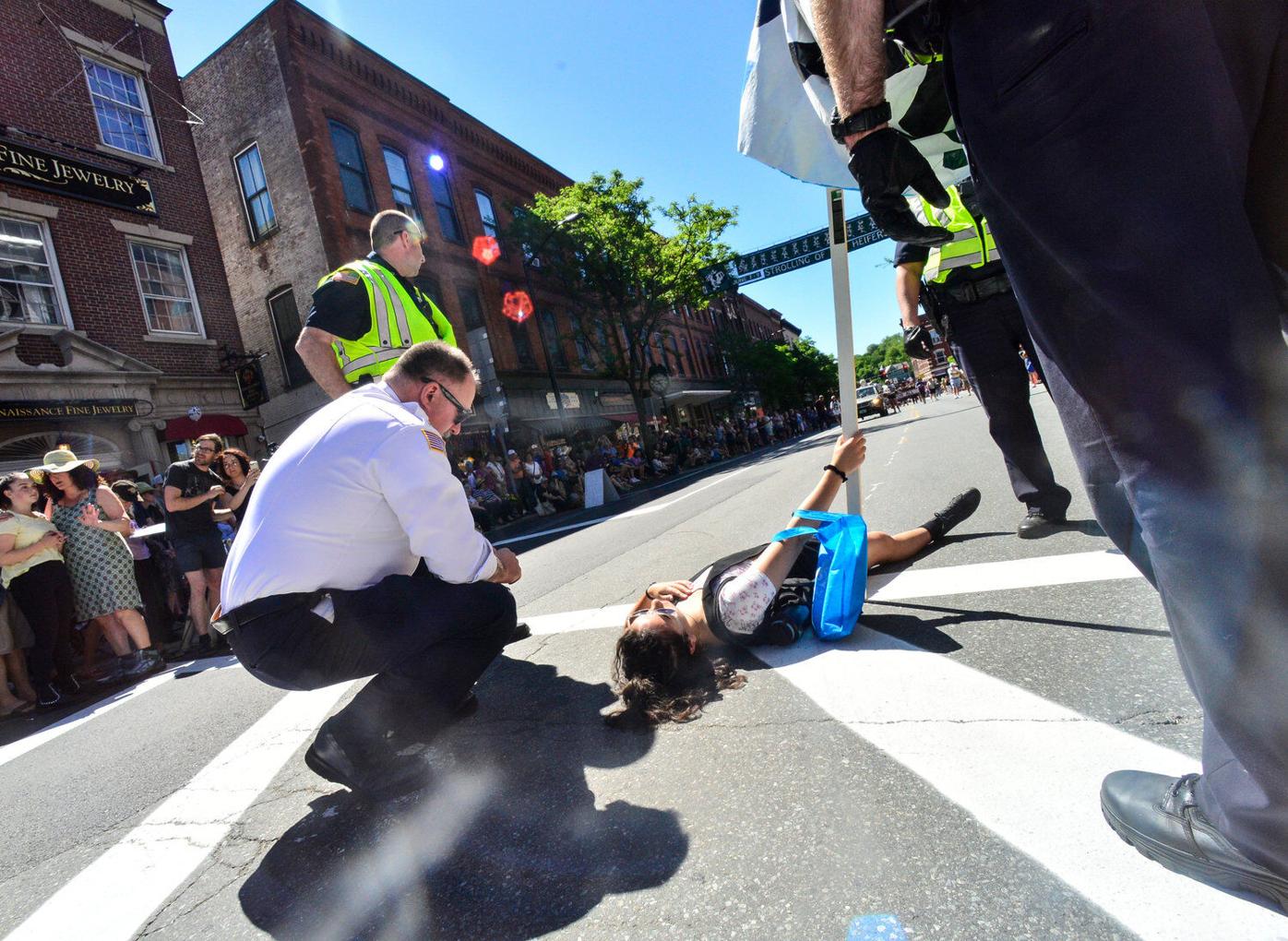 Brattleboro Police Chief Michael Fitzgerald asks a protester who was lying the in street to move so officials could get the Strolling of the Heifer parade going again.

Dominic Palazzo dresses as Captain America while walking with a heifer during the annual Strolling of the Heifers parade in Brattleboro on Saturday.

Sam Rodriguez, 9, and Celeste Unrath, 2, from Jericho, Vt., grab pieces of candy during the annual Strolling of the Heifers parade on Saturday.

Andie Majewski, of Winchester, N.H., walks a heifer during the annual Strolling of the Heifers parade in Brattleboro on Saturday.

Members of the Brattleboro Police Department briefly detained two protesters after a group protesting climate change laid down in front of the stage, causing the Strolling of the Heifers parade to halt for around 20 minutes on Saturday.

Brattleboro Police Chief Michael Fitzgerald asks a protester who was lying the in street to move so officials could get the Strolling of the Heifer parade going again.

BRATTLEBORO — It was a glorious day for a parade Saturday, as the 18th annual Strolling of the Heifers parade took center stage with thousands of people enjoying Vermont's multi-faceted agricultural heritage and dozens of little heifers - who really did stroll up Main Street.

But it was too much of a tempting target for a group of Brattleboro area protesters, who laid down in the middle of the parade near the reviewing stand, under a large banner, demanding the town declare "a climate emergency."

The protesters refused to move and held up the parade for about 20 minutes, as members of the Brattleboro Police Department, and even Lt. Gov. David Zuckerman, who was sharing parade commentator duties, tried to convince the protesters to move since they were holding up the parade.

After a few minutes, most of the protesters got up and went to the sidewalk.

But two of them remained, including Rio Daims, 17, and Django Grace, 13. Daims said afterward that the climate change activists thought the heifer parade was too much of an opportunity to pass up.

Police rolled the two protesters onto backboards, strapped them on and one by one carried them a short distance away, and the parade resumed.

Daims, who was one of the leaders of this year's Brattleboro Youth Vote, later stood at the foot of High Street with others holding their street-wide banner which proclaimed "Declare Climate Emergency: Act Now: Save Our Farm." Daims said she and others were upset with the Brattleboro Select Board's inaction on climate change, although she didn't have a specific complaint.

After the parade, Stroll founder Orly Munzing said she was disappointed by the protest, which she said was the first one to interrupt the tribute to the area's agricultural heritage.

She said the Stroll, which has grown into a three-day event focusing on sustainable foods and agriculture - "slow living," in the organization's phrase - shared the protesters' concerns about climate change.

"We all share their concerns," she said. "But I feel it was very disrespectful," she said.

"It's not respectful of our farmers," she said, to hold things up - not just for the people and animals in the parade, but many of the people and young children on the sidewalk, waiting in the hot sun.

While Daims and the other protester were carried on a backboard a short distance away, so the parade could resume, the police gave the activists back their banner, which they held up by the side of the parade route.

Afterwards, several people came up to Brattleboro Police Capt. Mark Carignan to thank him and the other police officers for their restraint and their peaceful handling of the protest.

Carignan said it was the only protest he could remember happening during the Stroll. The two protesters were not arrested, he said.

He said the police acted because they were interrupting traffic.

Earlier, the popular heifers, which came predominantly from 4-H clubs in Vermont, New Hampshire and Massachusetts, as well as a few dairy farms, had charmed the large crowd. Many of the little bovines sported small capes, a nod to this year's theme of "Farmers Are Our Super Heroes."

Leading the heifer parade were two 4-month-old chocolate brown Irish Dexter calves, named Joanna and Maya, lead by Colleen and Jody Routhier of Goshen, Mass.. who were part of Heritage Breeds 4-H Club of Franklin County in Massachusetts. "We raise them for beef and milk," said Colleen, who said that the small heifers were well accustomed to walking on a lead. "We practice every night," she said.

In addition to some of the more exotic breeds, including a Belted Galloway, there were the iconic Holsteins, as well as Ayrshires and Jersey heifers.

"Where would you be without food?" Zuckerman asked the crowd. He and his wife run an organic vegetable farm in Hinesburg.

Amelia Struthers was in her best "dairy godmother" costume, spreading fairy dust among the crowds. There was an abundance of residents in cow costumes.

Rayleyne Dionne-Couture and her son Hezekiah, both of Hinsdale, N.H., took in their first Stroll parade, with Rayleyne outfitted in a cow costume from Walmart.

After the parade, thousands of parade watchers streamed north the short distance to The Commons and surrounding areas for the Slow Living Expo, where vendors sold and explained everything from beeswax food wrappers to replace plastic wrap, or to meditate for a minute in a special tent set up by the Insight Meditation Center. You could buy everything from dog treats with CBD oil, henna face painting on bowls and baskets made in Kenya, to exotic peony plants.

Brattleboro's Commonwealth Dairy was handing out free cups of its quark, Liebe, "which means 'love," said Kelly Foley of Commonwealth. The dairy estimated they handed out 75 cases of the Bavarian-style quark, in flavors such as plain, lemon or "raspberry rapture." "It's creamy and cheesy," said Foley. "It doesn't have the bitter taste of yogurt."

Drawing large crowds in the Windham Superior Court parking lot were aerial artists from New England Center for Circus Arts, as well as Walter Hagedorn and his whimsical Love Sheep Project, which included a silver-painted rocket ready to "launch" some of his toy plush mechanical sheep into 'orbit.'

Hagedorn said he hoped to expand his sheep project and hoped other people would follow his lead and play with sheep, setting them up in creative and humorous activities outside his Brattleboro home. The Love Sheep have more than 3,000 followers on social media, he said. "I want to create a global network of Love Sheep," he said.

This was the first year since the beginning years of the Stroll where organizers did not overflow onto the Brattleboro Retreat grounds. Instead, the many vendors and organizations set up their tents in the parking lots of businesses and organizations near the Commons, including C&S Wholesale Grocers, which was giving away candy.