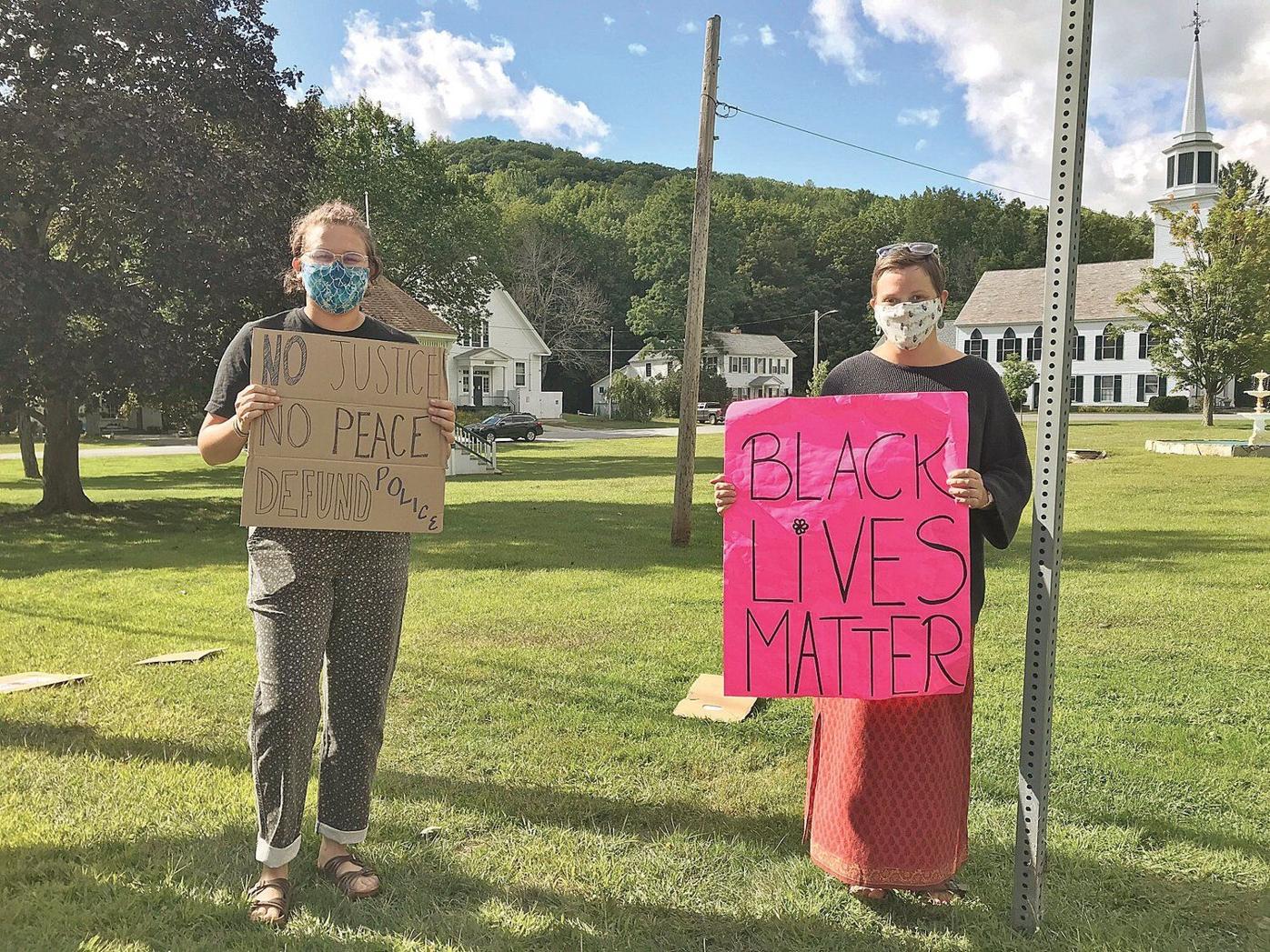 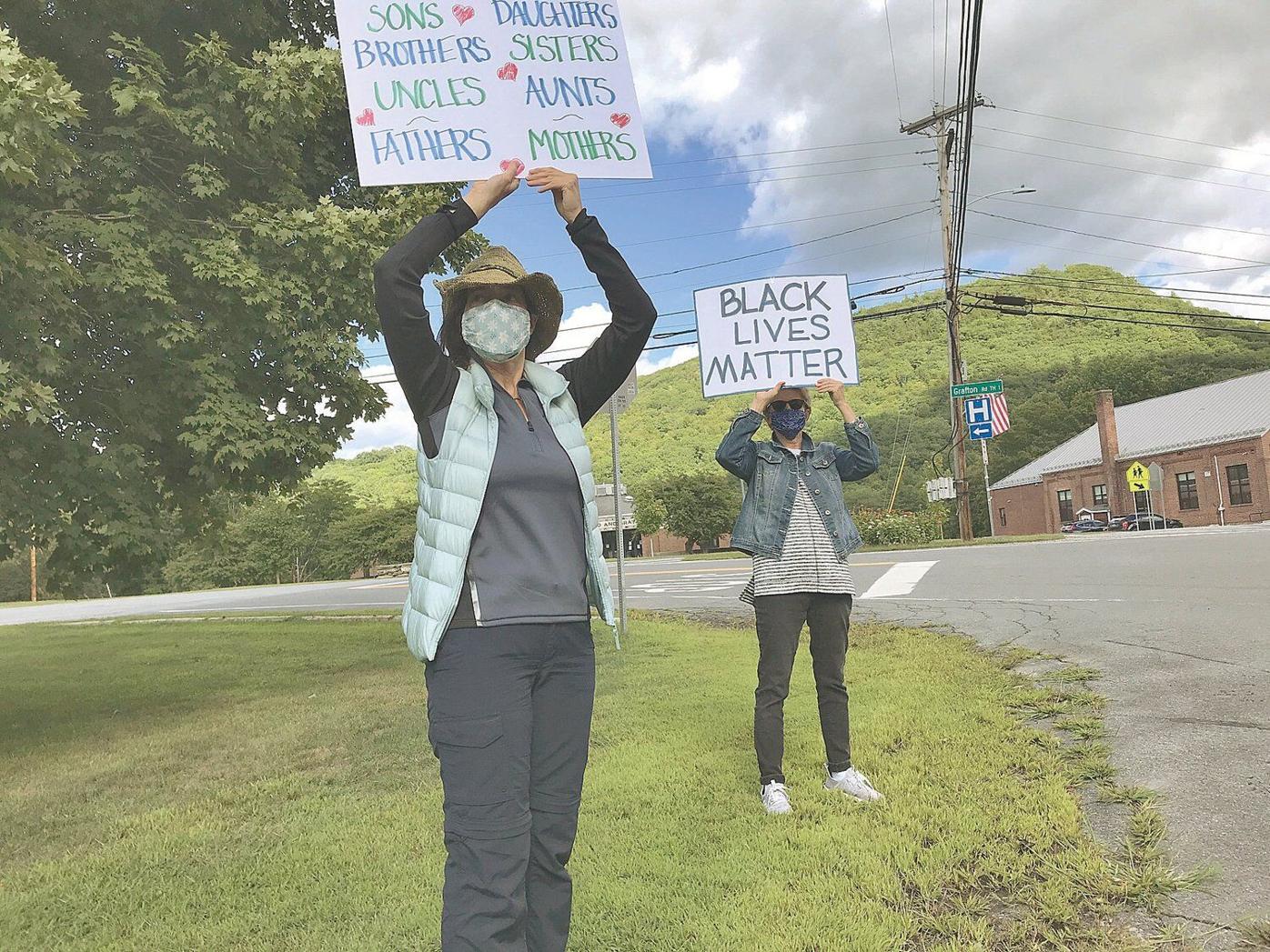 Jen Frey of Brookline and Priscilla Cotton of Newfane stand with signs supporting Black Lives Matter on the Townshend Common on Sunday, Aug. 30. 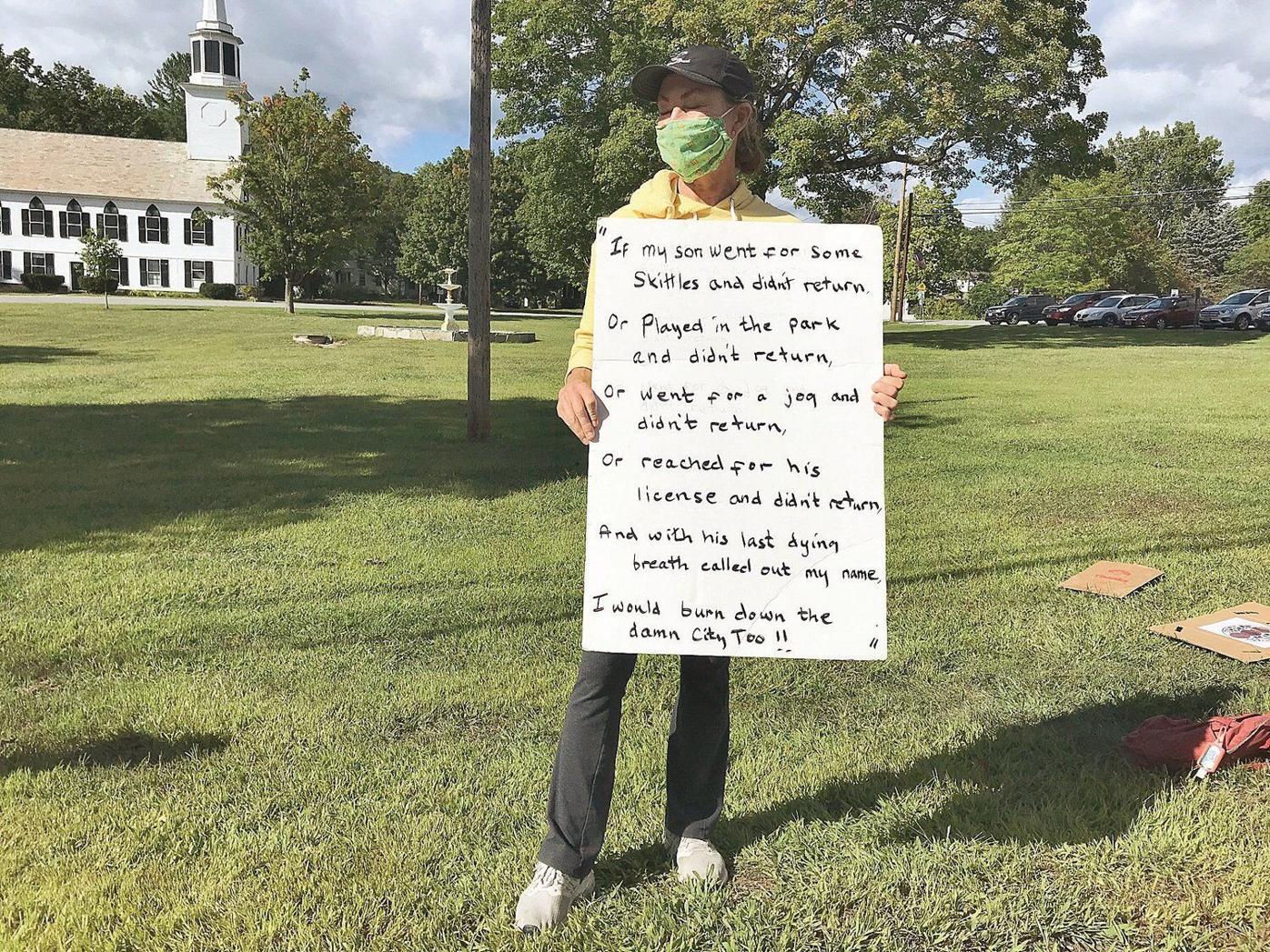 Jen Frey of Brookline and Priscilla Cotton of Newfane stand with signs supporting Black Lives Matter on the Townshend Common on Sunday, Aug. 30.

Communities and municipalities around Windham County have responded to national and local events with a clear message: They will fight racism and stand with the Black Lives Matter movement.

"We have so much work to do, but there are many of us willing to do it," said Senate Majority Leader Becca Balint, D-Windham. "It gives me such hope when I see so many communities coming together to reject racism and discrimination."

Brattleboro, where graffiti saying "BLM is Racist" was discovered on Western Avenue on July 22, is currently seeking a facilitator and committee members to review public safety with an eye toward eradicating any racism within local systems. The town is accepting proposals until Sept. 8.

"We are working towards a community that is free of white supremacy in all of its manifestations!" Out in the Open, a local nonprofit that connects rural LGBTQ people and builds community, said via Facebook. "We are building a process which will review and examine the Brattleboro Police Department, Town support for non-profit organizations, social service agencies and other community resources, as well as identifying currently unmet community needs. This open process will invite in the wealth of knowledge and life experiences that our community holds about police, social services, racism, oppression, and alternatives to punishment and violence."

Community members also participate in Solidarity Friday events downtown at Pliny Park. Attendees are "demonstrating against injustice and for a world where people's lives really are more important than profit," according to a Facebook post from the Root Social Justice Center.

In Putney, where the same graffiti message seen in Brattleboro was found near the Post Office and was reported to the Windham County Sheriff's Office on the same day, the town's Equity and Inclusion Committee issued a statement titled "Black Lives Matter."

"This is not the first act of racism to ever take place in our community and it has not been the last," the statement reads. "We must challenge, check, and change our systems and structures for equity every day, and this requires a life-long commitment. We do that by sending messages of love and support and acknowledging that we, as a community, have a lot of work to do. It is our responsibility to speak louder — much, much louder."

The committee called for "dismantling systems of racism and white supremacy."

The Putney Select Board agreed to support a Black Lives Matter mural in town. The project was proposed by the Windham County National Association for the Advancement of Colored People on July 29.

The Select Board also committed to having all town staff participate in bias training by the end of the year.

Board Chairwoman Laura Chapman said before the spray paint incident, the committee was engaged in "ongoing work of examining town policies for bias and is charged with exploring local policing practices within Putney." The committee, in partnership with the Putney Central School's leadership council, also started an anti-racism book group.

Local activists are looking for the Newfane Select Board to adopt a resolution condemning the vandalism. The same spray painted message from Brattleboro and Putney was found in Newfane on the same day on Route 30 near Cross Street.

"Newfane respects and cherishes all of its citizens, regardless of race, gender, sexual preference, or socioeconomic position," the draft resolution reads. "We do not see these racist incidents as just an attack on a particular group of people in our town; we understand that they are an attack upon all of us, and we pledge to respond as an entire town in a manner that heals the damage and works to prevent it from recurring. Any citizen who is the target of public ideological attacks that instill fear or intimidation will receive all possible support within the town's capacity to repair damage caused. We pledge, as possible within our purview, to hold the perpetrator(s) accountable in the most appropriate manner, whether it be encouraging criminal investigations, instituting restorative justice, or other meaningful methods of reconciliation."

The Select Board in Jamaica, where a similar graffiti incident was reported to the sheriff's office on Aug. 2, issued a statement condemning in "the strongest terms any effort to spread targeted messages of hate that are designed to induce fear in any member of our community."

"Hateful speech aimed at any member of our community will not be tolerated," the statement reads. "Happily, Jamaica is a diverse and vibrant community. We support all of the members of our community who engage in peaceful demonstration and constructive dialogue."

The sheriff's office said in Jamaica, three males were reported to have spray painted an intersection of Route 30 and Route 100 with the phrase "White is right BLDM." BLDM stands for Black Lives Don't Matter.

After a swastika was found spray painted on the shoulder of Route 100 near Ahmeek Road on Aug. 14, the Dover Select Board signed a resolution condemning the act.

"We do not know who is responsible for this, and do not know their motives," the resolution states. "But we, the Select Board, residents, business owners, and visitors in Dover are appalled by this action. It goes against what we all hold dear about Dover — its friendliness, strong sense of community, and welcoming character. We apologize for the perpetrators and regret any pain this may have caused. This is not Dover."

Community members also supported the resolution, which covered a full page in the Aug. 27 edition of the Deerfield Valley News with all the names of those who signed it.

In a letter anticipated to be sent to the Newfane Select Board soon, local activists said at least three incidents of vandalism targeted the homes of Black or interracial people in the West River Valley.

"Racists sought to intimidate specific families and to send a chilling message to the whole community," the letter states. "Racist threats are not a political point of view about which reasonable minds can differ. We can't let Newfane be a place where anybody feels threatened, or be a community that allows racism to fester, encouraged by our silence. Because of the history of racist violence in this country, statements like 'White Lives Matter' or 'Black Lives Don't Matter' are uniquely threatening. The targeted escalation with each episode makes it clear that intimidation is the intent of these vandals. By failing to stand up for what is right, we become a community that tolerates bullying, threats to our neighbors, and racism. That is not who we are."

After the death of George Floyd at police hands in Minneapolis in May, Sen. Balint began documenting local support for BLM by posting photographs of signs found around the community on Instagram.

"I'd heard from a friend on social media (who is a person of color) that it does matter to her when she sees a sign in support of BLM," she said in an email response to the Reformer. "It's a signal to her that she is not alone; it helps her to feel just a little bit safer. I thought about that a lot, and decided to snap a picture whenever I see a BLM sign on a house, an apartment or a business in my district, and then post it."

Balint said she wanted her social media followers to see just how many friends and neighbors support the movement.

Unfortunately, Balint said, she has friends whose signs have been stolen or vandalized.

"But I think these scared, angry people who are lashing out are in the minority," she said. "There are more Vermonters on the right side of history. But as a historian myself, I know it is going to take a long time to face the hundreds of years of injustice perpetrated against Black and Brown Americans — from housing discrimination, to lower pay, to being excluded from many provisions of the GI Bill and the New Deal."

Priscilla Cotton of Newfane held a BLM sign at a demonstration Sunday on the Townshend Common, the second local event she attended to support the movement.

"Have to do something," she said.

Sandy Glaser of Townshend said five protests were organized in her town earlier on but then they dwindled down.

"We decided this week, it's time to pick it up again," she said. "I realize we're a handful of white ladies in Vermont and our voices aren't going to be heard by the people who really matter."

However, Glaser said, it is important to be heard and seen. The group also has been raising money for organizations and to purchase books by people of color for the town's library.

Amy Blazej of Townshend said she feels local residents can get "really sheltered and live a bubble" where they don't believe racial issues exist. She encourages efforts to make Vermont a more diverse state, and a "safe and worthwhile place" for people of color to live.

Susan Tondreau of Newfane was happy to make it to Sunday's demonstration. She said she usually has to work.

After describing being disturbed by reports of racism and police brutality, Tondreau said things need to change.

"We can't give up, can we?" she said. "It affects you. You just can't stop crying for people."